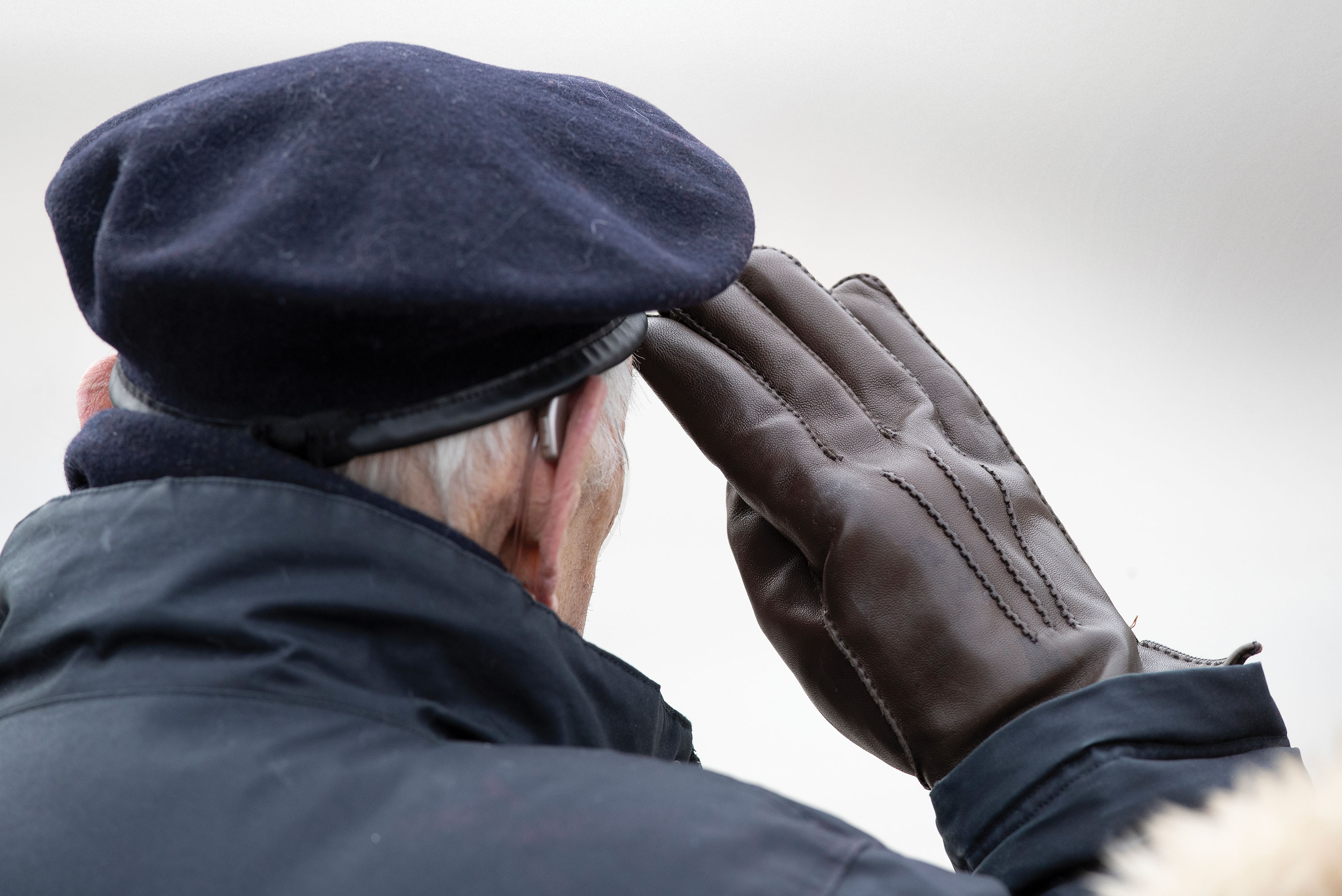 A veteran salutes during the remembrance ceremony in Ottawa on Nov. 11.
Stephen J. Thorne

The Second World War is never far from the heart and mind of 97-year-old veteran Bill Anderson, whose 5th Anti-Tank Regiment, Royal Canadian Artillery, landed in Normandy on D-Day +6 and fought its way through Europe and into Germany.

Appointed a troop commander after the lieutenant in charge was killed, the native of Saint John, N.B., saw action in France, Belgium, the Netherlands and Germany.

On Nov. 11, he was at the National War Memorial in Ottawa for the 2019 Remembrance Day ceremony.

The Germans “scared the daylights out of us,” said Anderson, who will represent Ontario veterans on a pilgrimage marking the 75th anniversary of the liberation of the Netherlands in 2020. “But I had a good group of people that I served with without injury and without injury to my men. And I’m very happy about that.

“It never goes away,” he added, least of all in November, when the poppies come out and the memories flow. He called the crowd in Ottawa, estimated at roughly 32,000, a “wonderful” tribute. “It’s a thrill. It really is.”

The throngs braved a stiff breeze and sub-freezing temperatures as they formed a kaleidoscope of colours, cultures and ages lining the streets surrounding the memorial arch for the ceremony. The parade of veterans seemed smaller, the number of those who served in the Second World War and Korea depleting with each year as they are gradually replaced by peacekeeping and Afghanistan veterans.

The ceremony started with “O Canada,” sung by the Ottawa Children’s Choir, followed by “Last Post,” played by trumpeter RCAF Sergeant Frederic Paci. At the stroke of 11 a.m., the first gun of the 21-gun salute ushered in The Silence, and thousands stood hushed for two minutes of quiet contemplation.

“The Lament,” “The Rouse,” and the Act of Remembrance were followed by a poignant prayer by Major-General Guy Chapdelaine, chaplain general of the CAF.

“We seek dialogue with one another in all spheres, social, political and religious, that in doing so, we may achieve a lasting peace,” he said. “May this be so and may we all strive to continue our efforts to build a better world.” 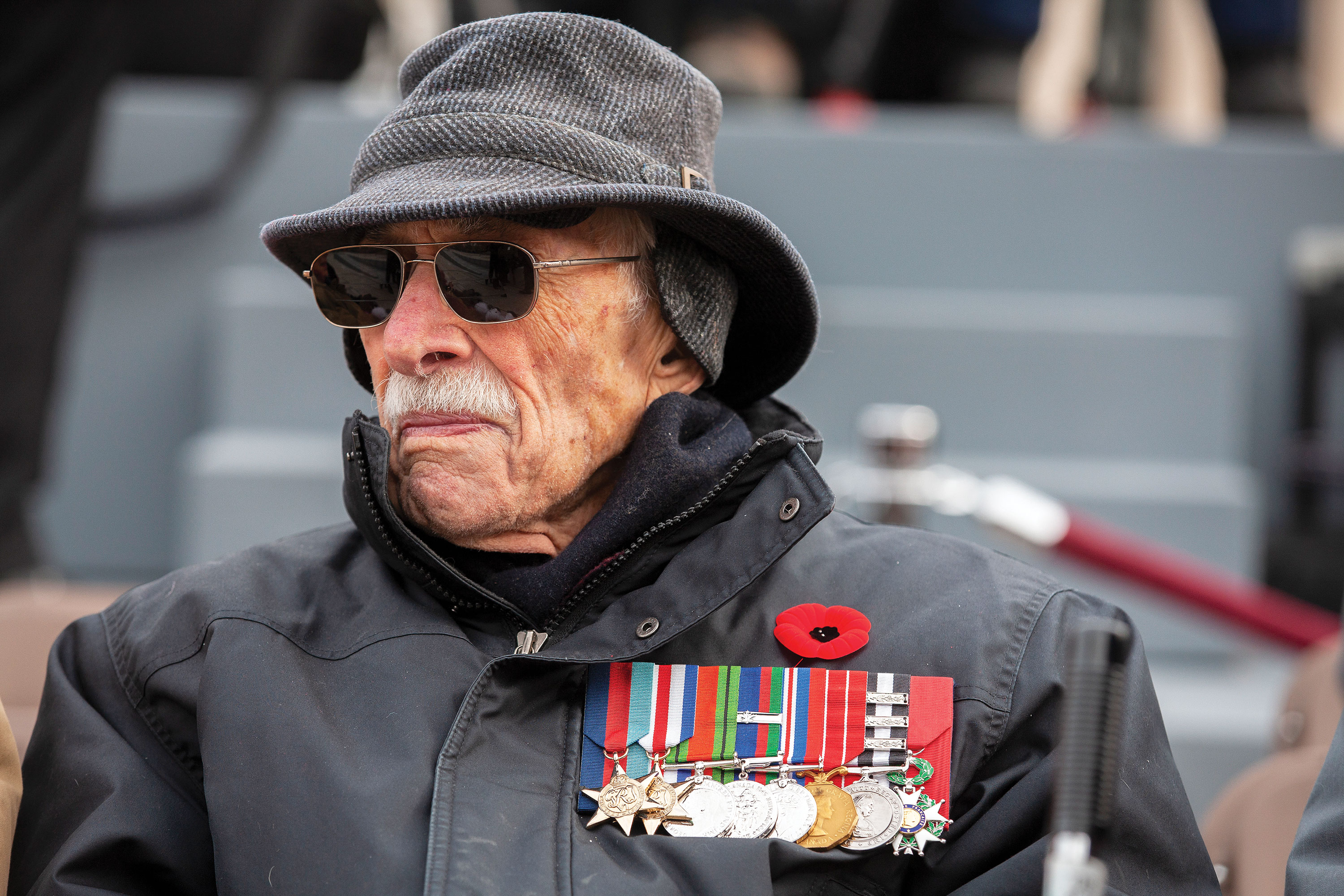 “It’s a thrill. It really is,” said Second World War veteran Bill Anderson (above), describing the 32,000 people who attended the ceremony in Ottawa.
Stephen J. Thorne

Silver Cross mother Dawe was a proud and dignified presence throughout the solemn ceremony. Matthew Dawe, the youngest of her four sons, served with the 3rd Battalion, Princess Patricia’s Canadian Light Infantry, based in Edmonton. He was a captain in charge of 8 Platoon, ‘C’ Company, when he, five other soldiers and an Afghan interpreter were killed by a roadside bomb on July 4, 2007, his son’s second birthday. Matthew Dawe was 27.

Matt was a “delightful child, very lively, mischievous, very artistic, too,” said Dawe, a retired physiotherapist. “He loved music, any kind of music, from opera to classical to the Rolling Stones. There was always music coming out of his bedroom. He loved theatre; he was in plays at school. He was a real mimic; he could imitate anybody—his dad, his teachers, any personality who had something interesting he could copy.”

He was a multisport athlete: rock-climbing (he climbed onto the roof of their two-storey house once), tennis, baseball, soccer, hockey. The brothers were competitive, yet supportive of one another. “He was also very brave and courageous,” Dawe said of her youngest. “That’s what brought him to Afghanistan.”

Matt Dawe’s two-year stint as commander of 8 Platoon finished before he was due to deploy. He could have stayed home, but Dawe was having none of it. 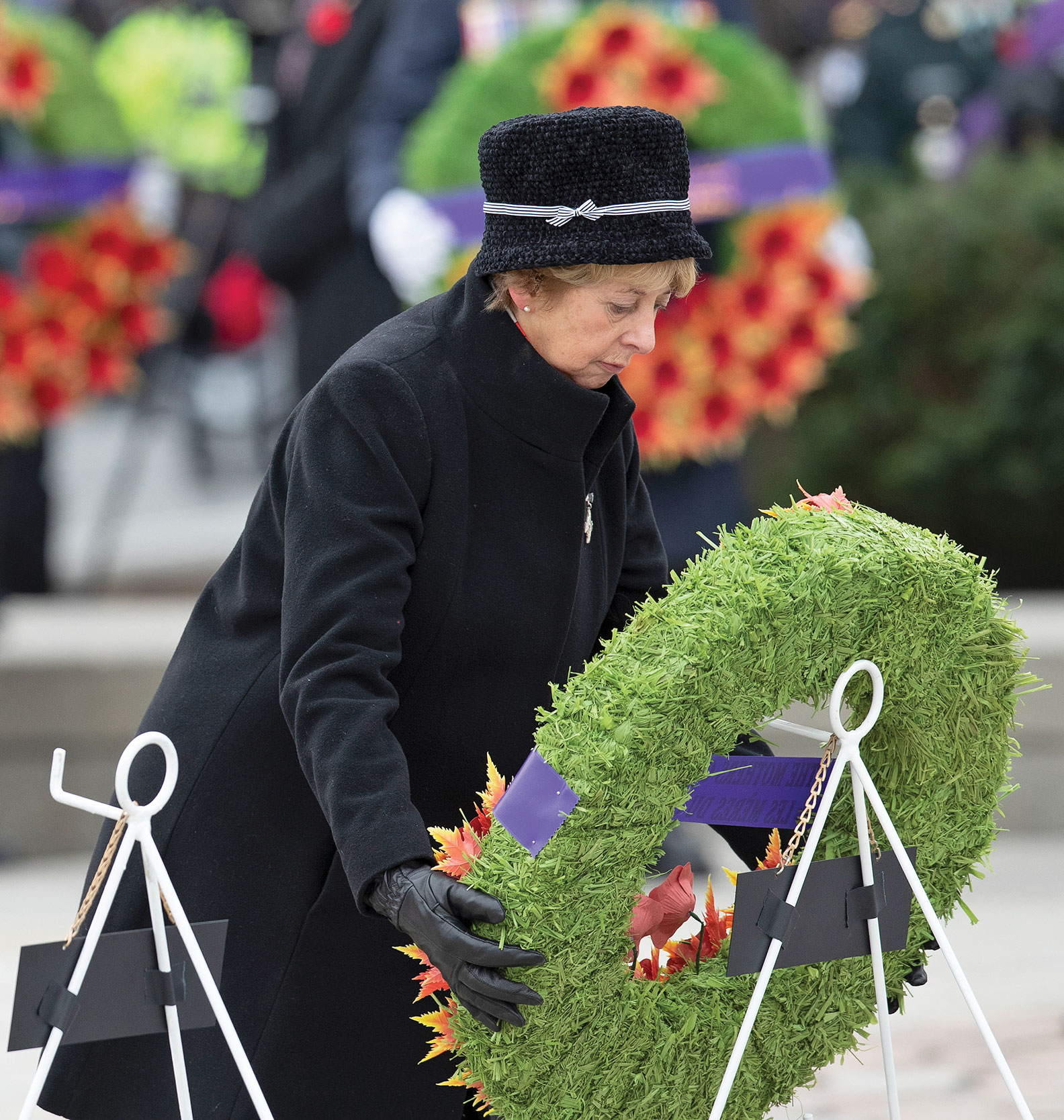 “He promptly marched himself into his commander’s office and said, ‘I’m sorry, but that doesn’t make sense. I trained with those guys. I know them very well. Am I supposed to send them over there with somebody they don’t even know and doesn’t know them? That’s not acceptable.’”

He won the debate and was included in the roster to deploy. Then he ruptured his Achilles tendon. The injury was supposed to take a year to heal. Dawe was back to form in four months.

“I’m asked sometimes, ‘Could you have changed his mind?’” said Dawe. “Well, first of all, I wouldn’t even have tried because it meant so much to him that I could well imagine how he would have felt seeing his ‘guys’ going over there without him.

“I always believed that our boys made their choices and we had to respect that. I wasn’t about to dissuade them from a career that was at times very scary.”

Matthew Dawe earned an engineering degree at the Royal Military College, and today a study room, a varsity athletic award and a sword presented annually to the top combat arms cadet all bear his name. A building at CFB Kingston, the Legion branch in Collins Bay, Ont., and an annual award for outstanding leadership and school spirit at La Salle Secondary School in Kingston, Ont., are also named for him. 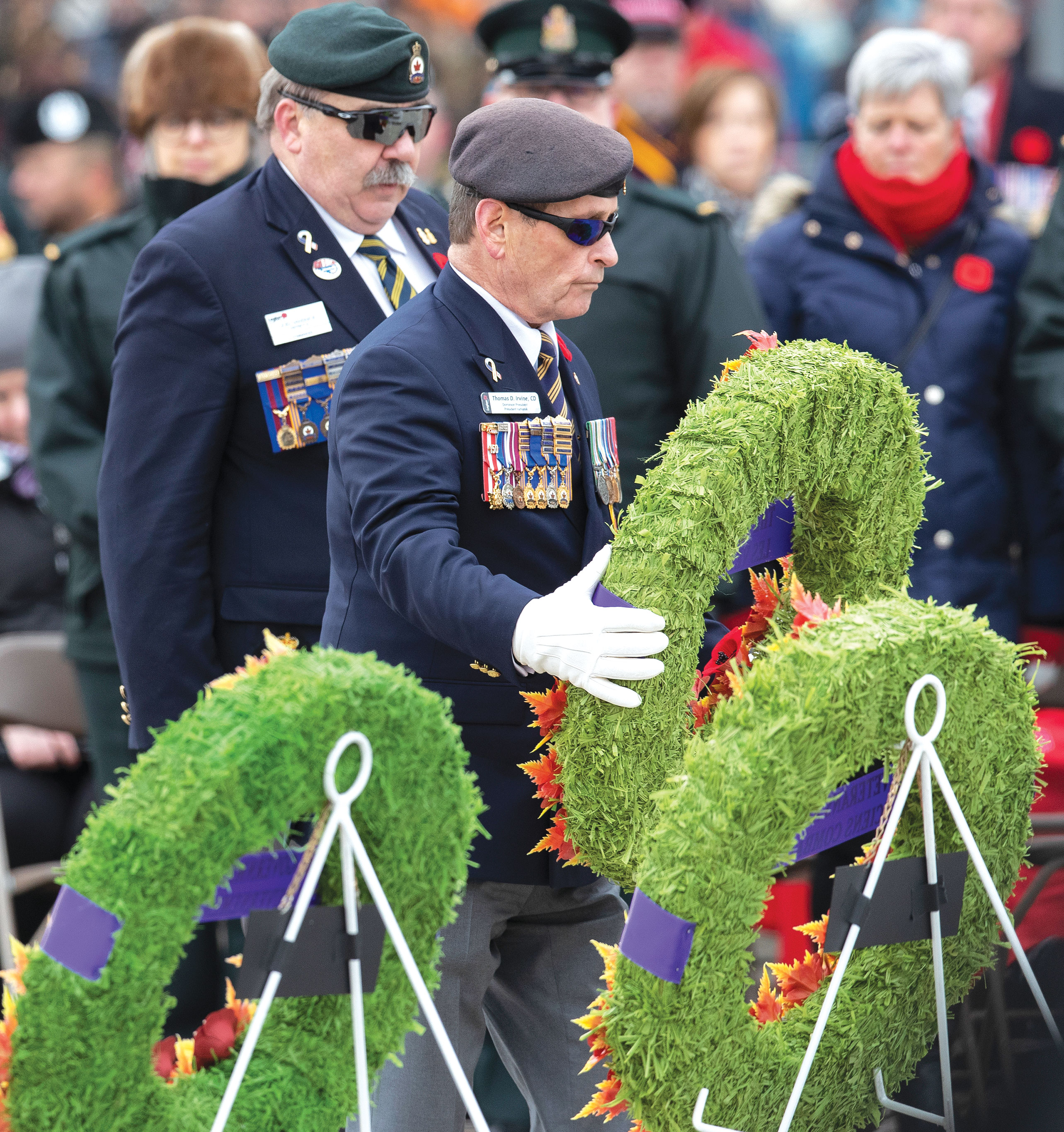 Reine Dawe’s husband Peter is a retired lieutenant-colonel and all their sons have served in the Canadian military. The oldest, Peter, is the major-general at the helm of the Canadian Special Operations Forces Command.

Dawe says she is proud of all of her sons, and not just for their military service. “They are all very good men—productive and socially aware and respectable. They all have very good accomplishments as far as careers and so on, but the most important to me is that they are good men. They are very good men.”

Dawe said she wants to use her platform as Silver Cross mother to remind Canadians to think of their military year-round, not just on Nov. 11.

“And I don’t want them to show pity for people who suffered in many different ways from the dangers of war. They deserve more than that. They deserve respect, gratitude and continuous support—for them and their families.”

Dawe is a member of Canadian Women for Women in Afghanistan, a group promoting and supporting human rights and the education of women and girls in the country where Canadian soldiers fought the remnants of an oppressive regime for 13 years.

“That’s very dear to me. And if you can’t do that, then work on tolerance in general. Tolerance for your fellow Canadians, friends and family. That’s the easy part, but also for people who are different from you, whether by looks or culture or status. To me, that’s the basis of a good society.” 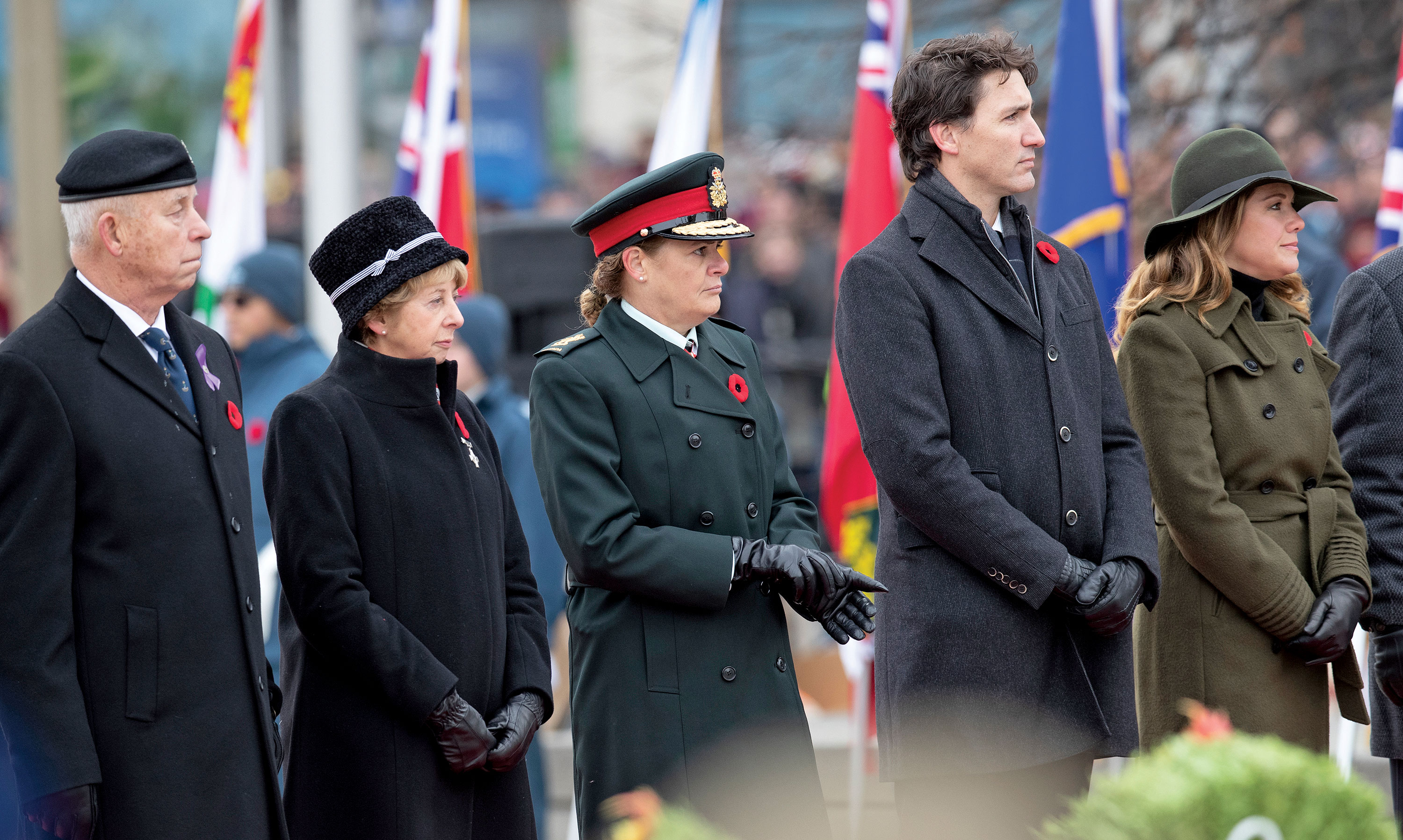 Rabbi Reuven Bulka, honorary chaplain of the Royal Canadian Legion Dominion Command, echoed that sentiment in his benediction, as he reminded those present that courage and sacrifice knows no colour, race or creed.

“We are grateful for the supreme sacrifice so many Canadians made, and were ready to make, on land, in the air, at sea,” he said. “We are grateful to the dead, the wounded, the survivors, the war-bereaved. 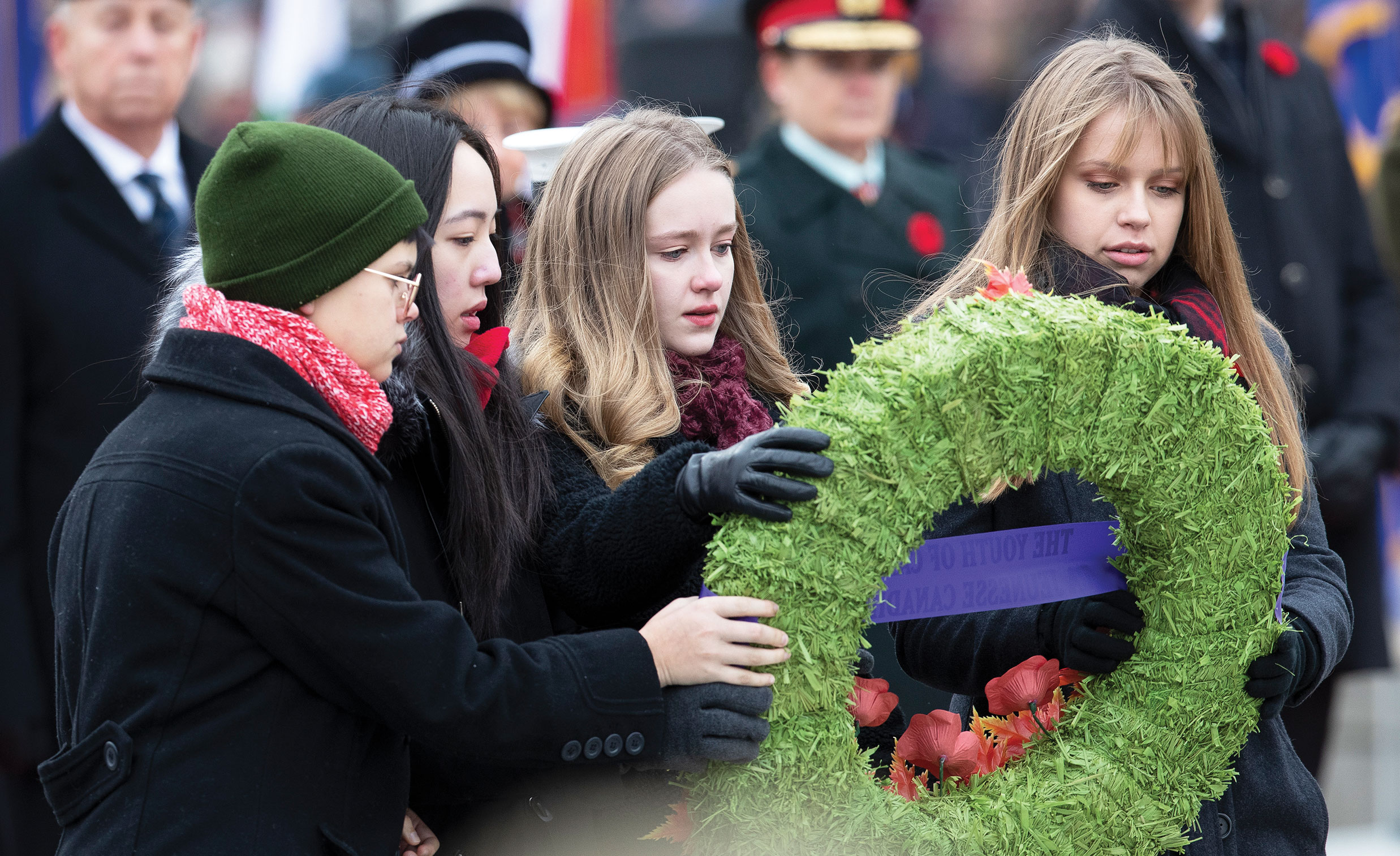 Winners of the Legion’s national senior poster and literary contests placed a wreath on behalf of the youth of Canada.
Stephen J. Thorne

“We are grateful to all the men and women—our anglophones, francophones, Indigenous Peoples and veterans of many ethnic and religious communities. We are grateful to them for putting their lives on hold and at risk in order to eliminate tyranny and defend liberty.