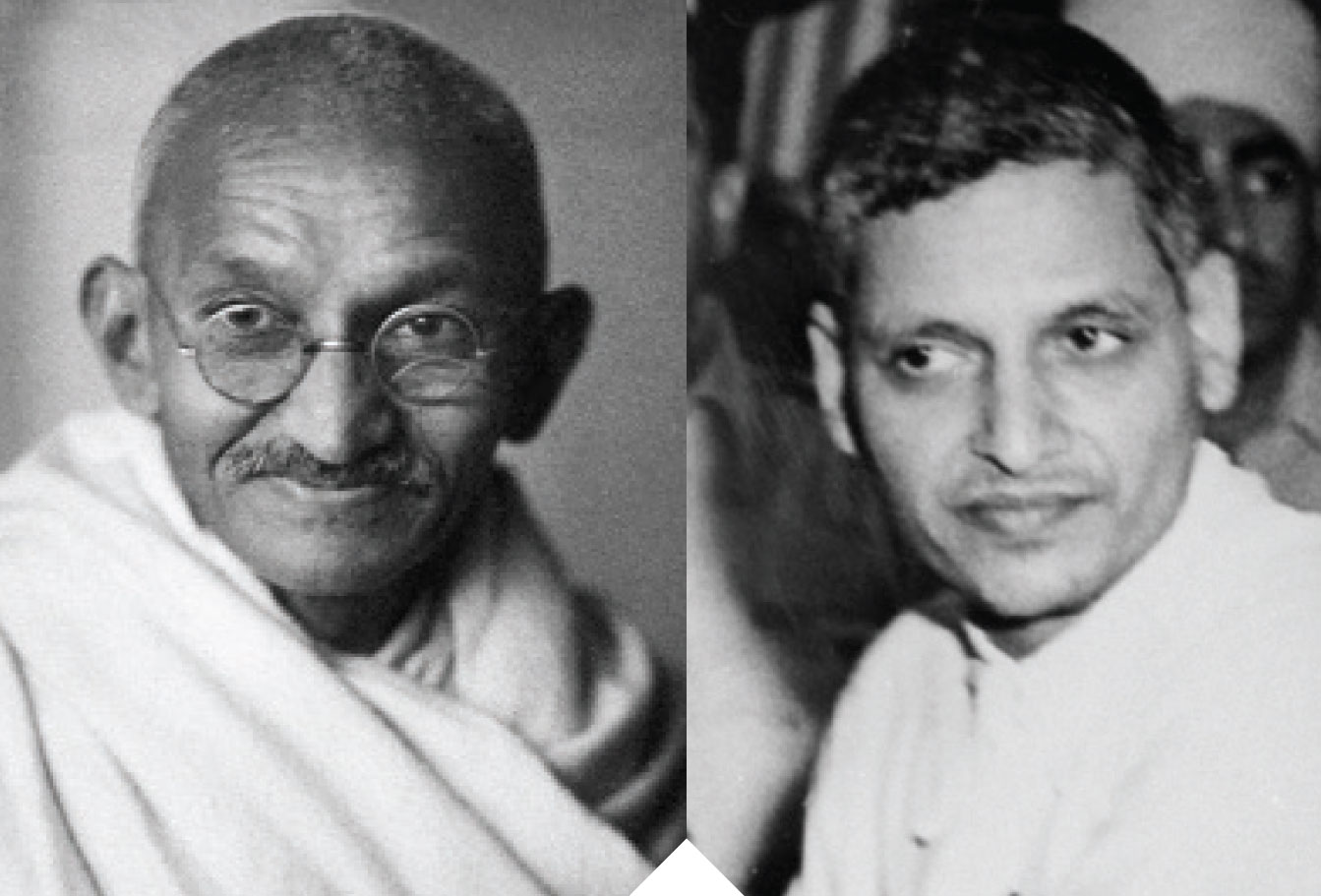 “I am a lover of my own liberty and so I would do nothing to resist yours.” — Mahatma Gandhi (left) “Honour, duty and love of one’s own kith and kin and country might often compel us to disregard non-violence and to use force.”— Nathuram Godse
Wikimedia
Hero: Mahatma Gandhi

Two days before his assassination, Mahatma Gandhi said, “If I’m to die by the bullet of a madman, I must do so smiling. God must be in my heart and on my lips. And if anything happens, you are not to shed a single tear.”

In 1915, Mohandas Karamchand Gandhi—already reverently known as Mahatma for his spiritual lifestyle and beliefs—returned to India after 21 years in South Africa. During his years away, Gandhi had practised law and, more importantly, earned an international reputation as a leading proponent for Indian self-rule.

Back home, Gandhi’s status quickly made him a key figure in the Indian independence movement. Advocating moderate, pacifist resistance to British rule, Gandhi was elected president of the Indian National Congress in 1920. On January 26, 1930, he led the congress in declaring independence. Although it rejected the declaration, Britain granted the congress more influence. In September 1939, the congress broke with the British Raj (rule by the Crown) when Victor Hope, 2nd Marquess of Linlithgow, the governor general and viceroy of India, declared war on Germany without consultation.

By 1942, Gandhi’s increased demands that the British quit India entirely led to his imprisonment. Two years later, the British released him—in failing health due to fasting—because they feared his death in prison would spark a general uprising.

Gandhi sought unsuccessfully to convince the Muslim League to work for unified independence instead of partitioning India along religious lines, arguing that the partition question could be decided in plebiscites in affected regions after independence.

Gandhi’s moderate approach, meanwhile, attracted the ire of radical Hindus, who targeted him for assassination. Nathuram Godse, a group leader, first attempted to kill Gandhi with a dagger in July 1944. Disarmed by bystanders, Godse was freed at Gandhi’s instruction. In September 1944, while approaching Gandhi in Bombay, Godse was again foiled by bystanders.

By Jan. 30, 1948, Gandhi was 78 years old and severely weakened by protest fasting. His great niece and adopted daughter were steadying him on either side as he walked to the place where he conducted regular evening multifaith prayer meetings. Suddenly, a stout man wearing a khaki bush jacket and blue trousers pushed through the crowd. While pretending to want to touch Gandhi’s feet, Nathuram Godse drew a pistol and shot him three times at point-blank range.

“The light has gone out of our lives,” said Prime Minister Jawaharlal Nehru on All-India Radio. “The Father of the Nation is no more.”

Hindu radical Nathuram Godse and accomplice Narayan Apte procured a 9-millimetre Beretta semi-automatic pistol on Jan. 28, 1948. Godse had been disarmed on two separate earlier attempts to kill Mahatma Gandhi with a dagger. He was confident the pistol would ensure success.

Two days later, Godse approached and fatally shot Gandhi. Making no effort to escape or kill himself, the 37-year-old narrowly avoided being beaten to death by the crowd before police took him into custody.

Born Ramachandra Viayak Godse to a Brahmin family (the highest Hindu caste), his parents initially raised him as a girl because three earlier sons had all died in infancy and they sought to break a perceived curse. They pierced his nose in Hindu feminine fashion, resulting in a nickname of “Nath” and his adoption of the name Nathuram.

When Godse was 19, his father moved to the port city of Ratnagiri, where the Hindu activist Vinayak Damodar Savarkar was serving a 50-year sentence for supporting an armed uprising. Allowed to freely walk the streets, Savarkar continued fomenting violent resistance to British rule. Savarkar introduced Godse to Hindutva—the belief in a Hindu-dominated nation. While theoretically offering religious freedom, Hindutva calls for Muslim, Christian and other religions not originating in India to be subordinate to Hinduism.

By the time Gandhi became president of the Indian National Congress, Godse believed the Muslim League had suborned the political body. He also condemned Gandhi’s calls for non-violent resistance to British rule as unrealistic and ineffective. In 1944, Godse and Apte founded a newspaper which they used to advance Hindu nationalism.

India’s independence in 1947 included partitioning its western region into Muslim Pakistan. This infuriated Godse and his anger focused on Gandhi.

“An individual is never greater than a nation,” said Godse. “But Gandhi has started considering himself greater than the nation.” Accordingly, Godse joined a conspiracy—likely led by Savarkar—that decided on January 13 to kill Gandhi. Seventeen days later, Godse had a chance to strike.

“My confidence about the moral side of my action has not been shaken even by criticism levelled against it on all sides,” Godse later wrote. “I have no doubt that honest writers of history will weigh my act and find the true value thereof some day in the future.”

While Savarkar was acquitted at trial on Feb. 10, 1949, Godse and Apte were sentenced to death. Five other conspirators received life sentences. On Nov. 15, 1949, the two men were hanged. While being led to the gallows, Godse shouted repeatedly, “Akhand Bharat,” which means “Undivided India.”