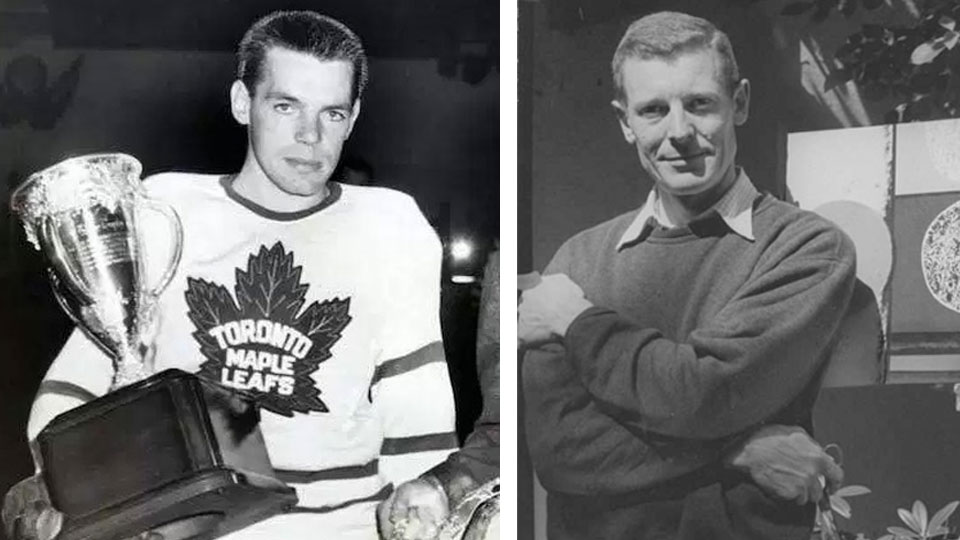 Howie Meeker (left) with the Calder Memorial Trophy as the NHL’s top rookie in 1947 and artist Gordon Smith photographed in 1956.
Wikimedia/Vancouver Sun Archives

As Remembrance Day approaches and we recall and commemorate the sacrifices of those who died while serving, we should also be reminded that one of the costs of war is the loss of what those ill-fated men and women—more than 100,000 in the two world wars—could have accomplished if they had lived on in peacetime.

The article “Last soldier standing” on page 18 profiles the last surviving veteran of each war in which Canada fought—from the War of 1812 to the First World War. One lived to the age of 100 and had a lengthy postwar career as an admiral. Another ran an oil business, got his pilot’s licence at 65 and high-school diploma at 95, and wrote his autobiography at 100.

Thousands of Second World War and Korean War veterans live on. Many have had postwar lives that, one way or another, enriched our nation’s economic, public, scientific, academic, sporting and artistic tapestries.

Take 95-year-old Howie Meeker, for example. Born on Nov. 4, 1923, he was a high-scoring junior right-winger before serving in the war for three years. Postwar, in eight seasons with the Toronto Maple Leafs, he celebrated four Stanley Cup victories. He also served as a member of Parliament for two of those years. He operated hockey schools, which became a CBC television series in the mid-1970s, and was an analyst on Hockey Night in Canada. For decades, he contributed to the growth of the Special Olympics. He and his wife Leah are founders and patrons of BC and Alberta Guide Dogs. Accomplishment, indeed.

Or 97-year-old J. Keith Fraser. He served in the RCAF and the RAF in the war, then came home and studied geography at the University of Toronto and Clark University in Massachusetts. He joined the federal Department of Mines and Technical Surveys, embarking on years of field research in Arctic Canada. The Fraser Lectureship in Northern Studies, a program of the Royal Canadian Geographical Society, is named for him.

Or centenarian Gordon A. Smith. Born in England in 1919, Smith received formal art training, moved to Winnipeg in 1933, and in the war served as an intelligence officer with the Princess Patricia’s Canadian Light Infantry. He was wounded in Sicily in 1943 and sent home to Vancouver, where he poured himself into painting. Vancouver Art Gallery showed his work and a long career in contemporary art ensued. In 2009, Smith, then 90, received a Governor General’s Award for artistic achievement in visual and media arts.

These veterans’ lives demonstrate that militaries recruit and train some of the most talented and skilled individuals. People with great potential who, after serving, go on to lead fruitful civilian lives and contribute much to their country.

War forces society to forfeit some of that potential. We will remember that.