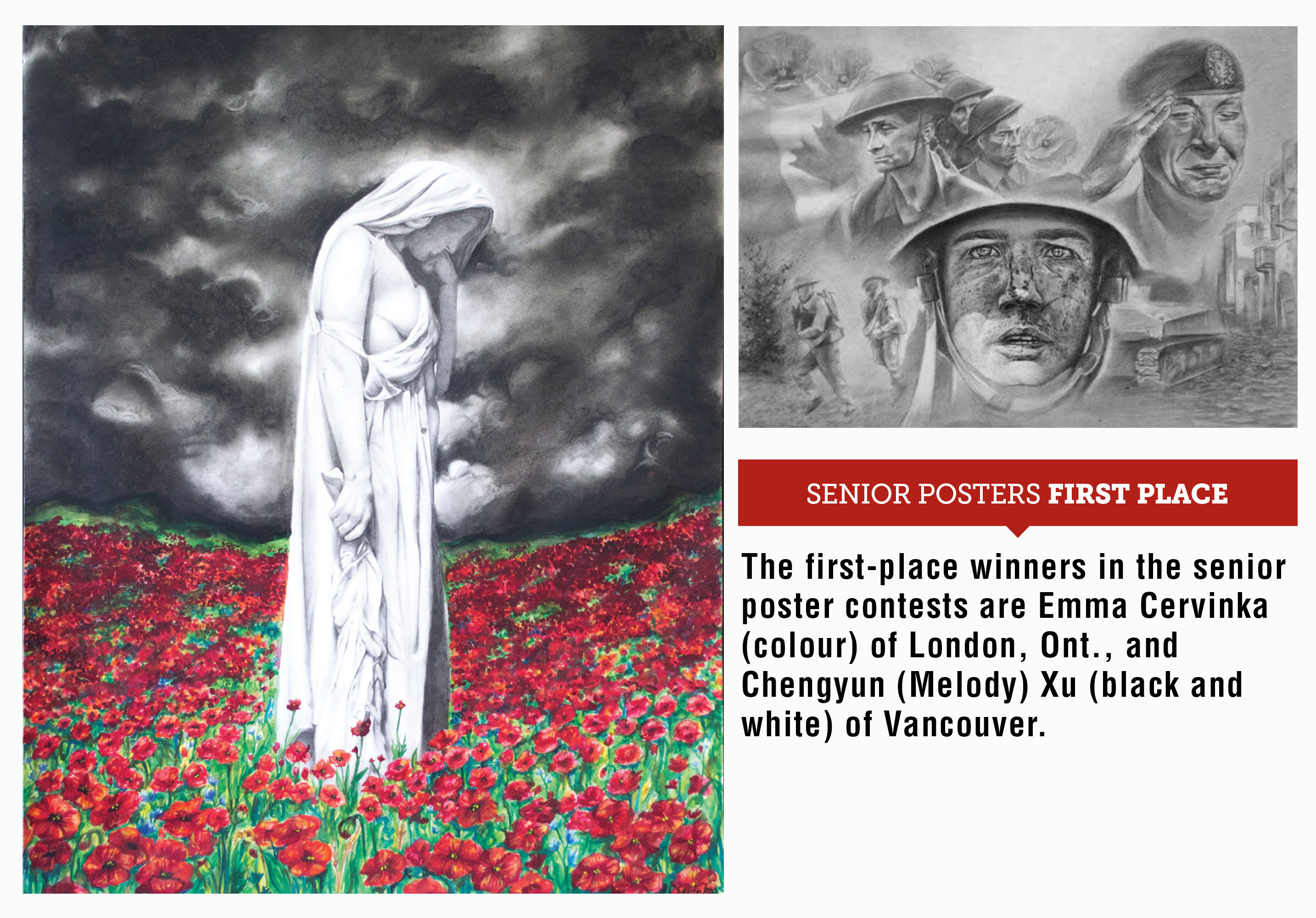 When does the service and sacrifice of men and women who fought and died for Canada move from history to reality?

For Gina Spencer, winner of The Royal Canadian Legion’s senior essay contest, it was on a Grade 10 pilgrimage, while standing over the grave of Thomas Brinton of the 1st Battalion, Newfoundland Regiment, who died Oct. 14, 1918.

“I spent the entire year learning about the First World War,” Spencer said during a break between Grade 11 classes at Corner Brook Regional High School. Those lessons “came to life as I was walking through the trenches, seeing the cemeteries and the poppies.”

She was assigned to research the 19-year-old soldier, but upon reaching his grave, found he had lied about his age. He was just 16. “My age exactly,” she wrote in her untitled essay. Suddenly it became personal. “Thomas could have been my best friend,” she wrote, and added in an interview, “He could have been my brother.”

Now she makes a point to pass the torch to friends and people her age, and has become a history buff. Near Remembrance Day, she visits a veteran in long-term care, a custom she intends to continue.

Over the past five decades, millions of students from kindergarten through Grade 12, from communities big and small across Canada, have entered the Legion’s poster and literary contests. The contests are divided into four categories—colour poster, black and white poster, essay and poem. Each has senior, intermediate and junior levels. There are also colour and black and white poster contests for primary level. Organized by local branches, the winning entries progress through regional and provincial levels, to Dominion Command in Ottawa, where national winners are chosen. 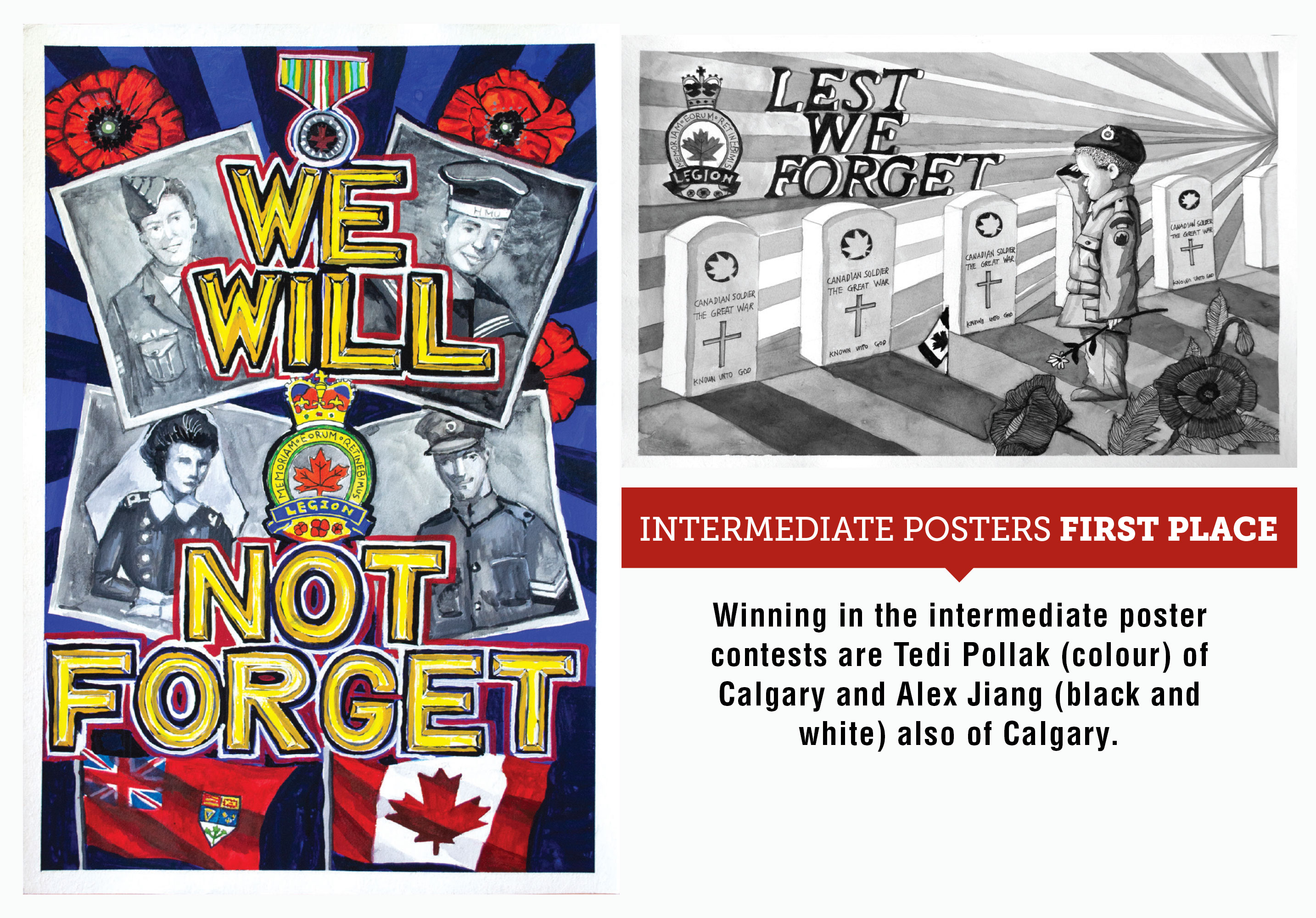 “I am proud of myself for getting people to talk about World War One,” said Evan Dicks, 13, a Grade 8 student at Xavier Junior High School in Deer Lake, N.L. who placed first in the intermediate poetry and essay contests.

His poem personalized the popular First World War song “It’s a long way to Tipperary,” in memory of members of the Newfoundland Regiment who fought and died at Suvla Bay in modern-day Turkey and Beaumont-Hamel in France:

It’s a long way to St. John’s to the family that I know.

My body lies at The Danger Tree; my heart is in Newfoundland.

His essay pays homage to his cousin, Campbell Withycombe Nichols, who fought at Beaumont-Hamel, but was not among the 68 who answered roll call the next morning. “His final resting place remains unknown,” wrote Dicks, who said he “will make it my mission to encourage others to remember their sacrifice.”

Maëlle Enter, nine, a home-schooled Grade 3 student in St. George, Ont., placed first in both the primary colour and primary black and white poster contests. “I love how soldiers fought for me,” she said, “and I’m really grateful.” Her brother Andrew placed second in the senior poetry contest.

The colour poster shows a tree whose wind-blown leaves are falling above crosses on a gentle hill. The black and white poster features poppies and a helmet in the foreground, and in the centre, on a hill, the silhouette of a soldier against a large white maple leaf set in a striated sky.

The colour poster, by Emma Cervinka of Catholic Central High School in London, Ont., features the Mother Canada statue from the Canadian National Vimy Memorial in a field covered with vivid red poppies, against a background of the storm clouds of war.

“I wanted an image that would represent all of Canada,” said Cervinka, whose two great-grandfathers served in the Second World War. “Mother Canada is the perfect symbol—someone watching over all Canadians.”

Cervinka, who is going on to study landscape architecture, also placed first in the coloured poster contest in 2018. 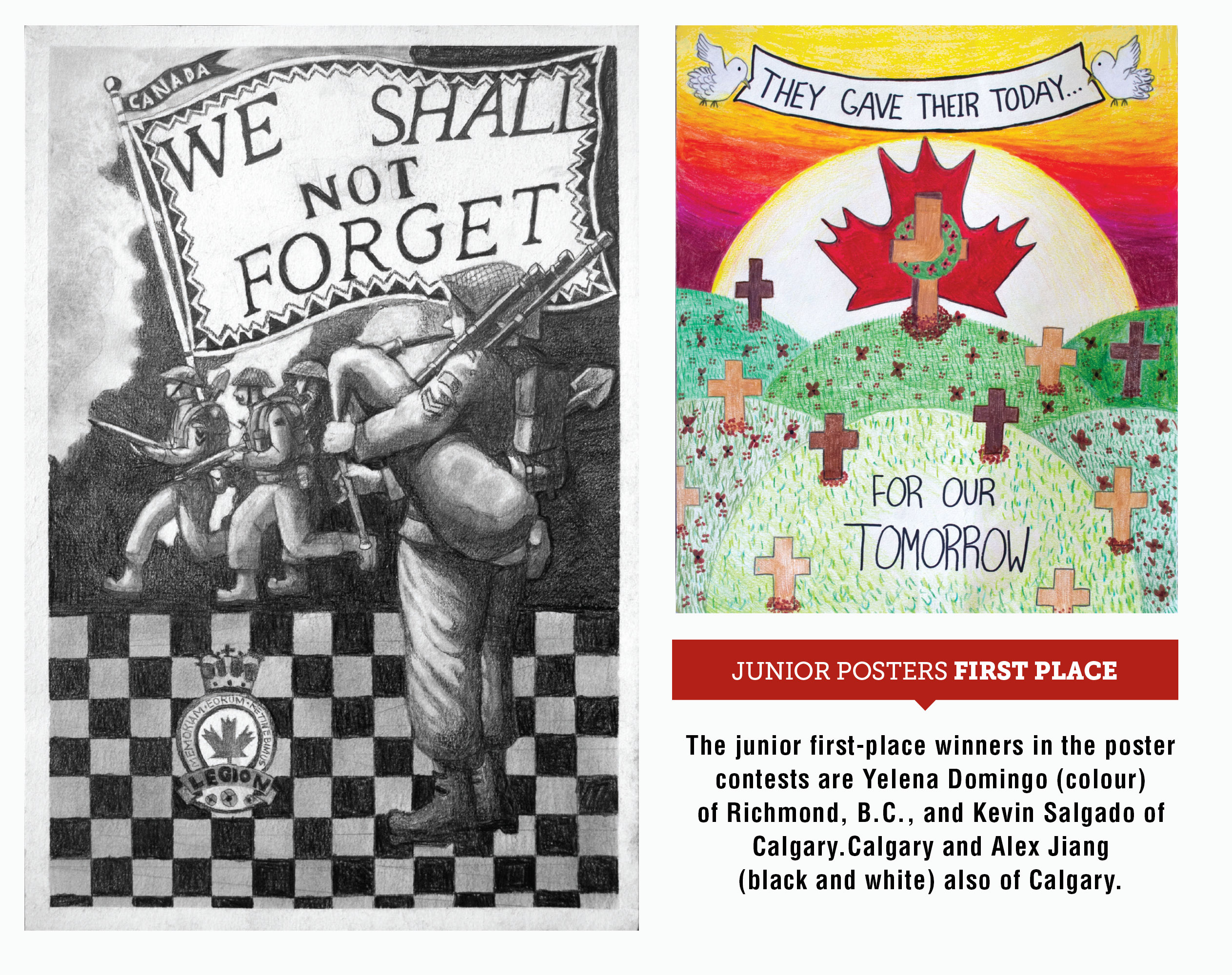 The black and white poster by Chengyun (Melody) Xu of Lord Byng Secondary School in Vancouver features soldiers’ faces, poppies, a tank and a Canadian flag.

Rayne Pensak of Strathcona-Tweedsmuir School in Okotoks, Alta., explored her own family history in her first-place junior essay. “Before I heard my grandfather’s story, I always thought war was something you chose to go to.”

Tadeusz Pecak (the spelling was changed after the family emigrated to Canada) was 14 when the Second World War came to Poland. The family was given 24 hours to pack and leave their home. “They walked for days, at gunpoint, before being loaded onto train cars meant for animals, without food or water.” They were transported first to Siberia and then abandoned in China, she wrote.

At 16, Tadeusz dug graves for his father and youngest brother, who died of starvation. He joined the Polish army and sent life-saving food packages through the Red Cross back to his family, with whom he was reunited 10 years later.

“Remembrance Day means remembering all the soldiers who gave their lives—willingly or unwillingly—to give us the lives we live today,” Pensak said. 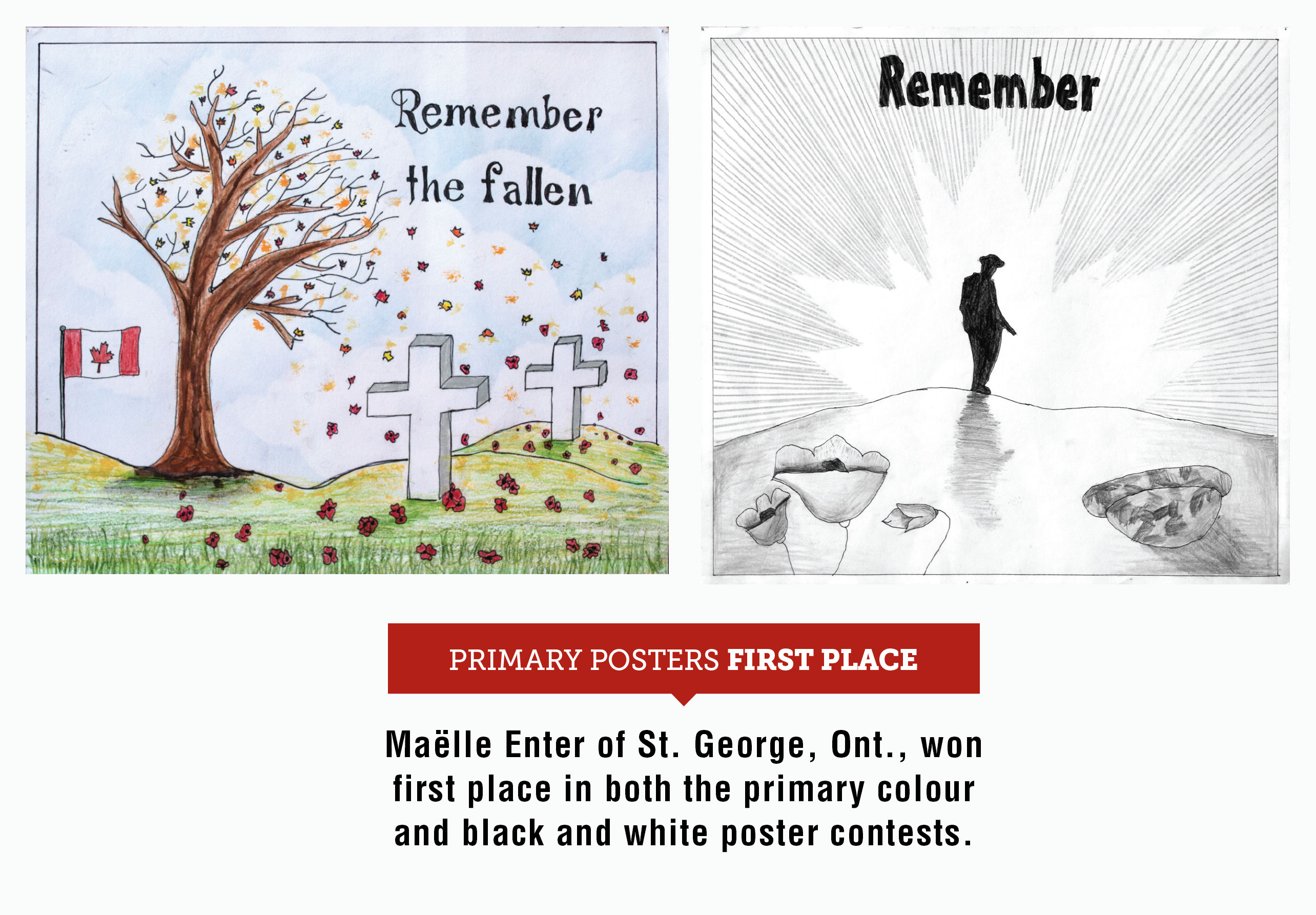 Elizabeth Kirby, a Grade 12 student in Bluefield High School in Cornwall, P.E.I., challenges the reader in her first-place senior poem.

We watch in silence.

When does our silence stop being respectful?

When does it become complacent?

When will our voices drown out that choked silence and our actions replace that stoic watching?

Writing remembrance poetry has given her a new perspective. “I have a lot more respect and understanding than I did,” she said, especially after talking to veterans and serving military members who explain how her work has touched them. “I’ve learned how even just a small gesture can mean a huge amount to someone, so even if it seems insignificant to us, we should do it anyway.”

Young people can start taking action by going to local Remembrance Day ceremonies and not “just the school one we are forced to attend.”

The Legion sponsors a trip for the four winners of the senior contests to take part in Remembrance Day ceremonies in Ottawa. First-place entries from all categories are on display at the Canadian War Museum until May 2020.