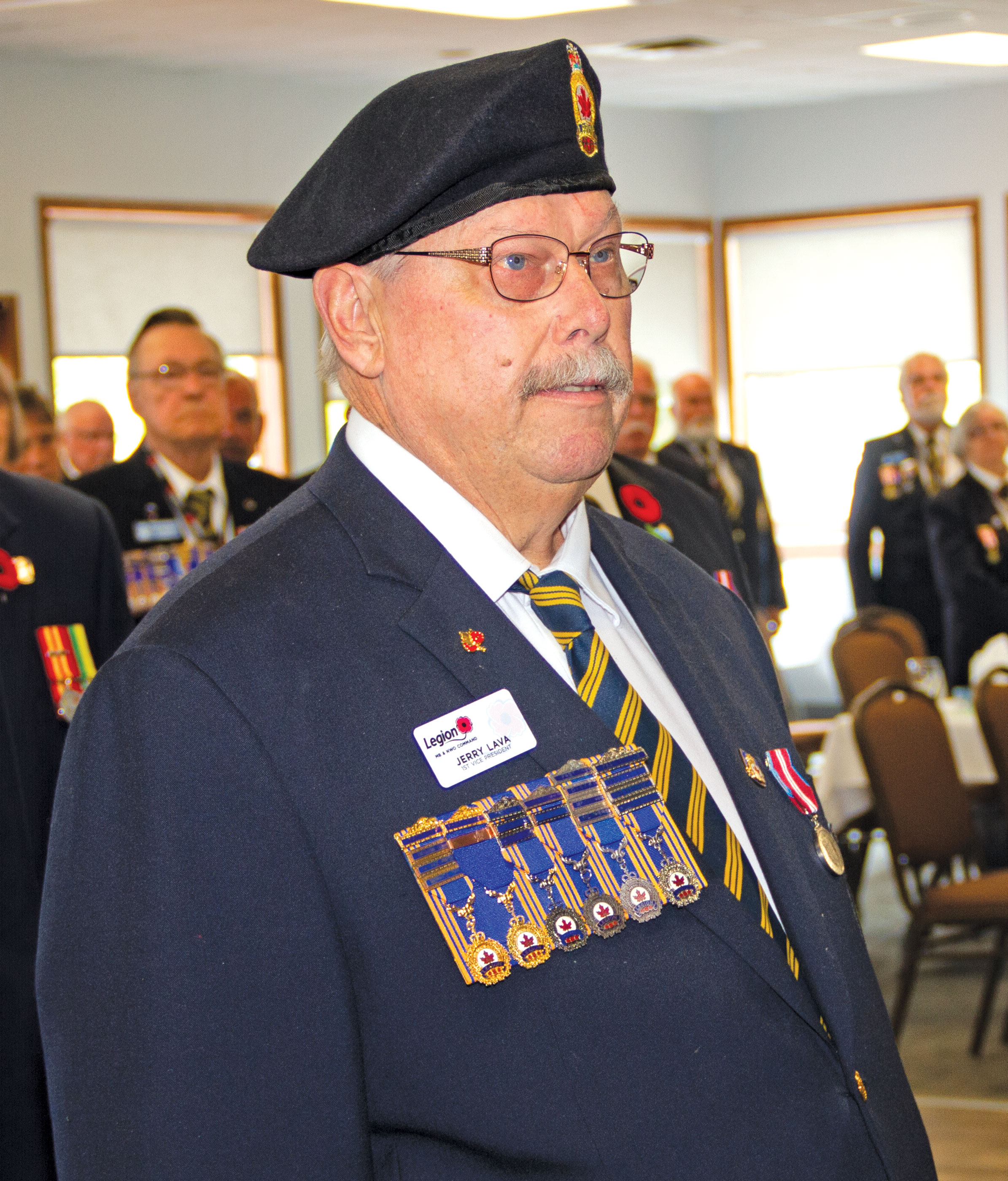 Jerry Lava is installed as the new president.
Tom MacGregor
Getting online members into the branch where they spend money and get to know their comrades was on the mind of delegates at the 49th Manitoba-Northwestern Ontario Command Convention held June 14-17 in Fort Frances, Ont.

Four resolutions were put forward following the report of the Membership Committee. Two almost identical resolutions called on Dominion Command to transfer new online members from a holding branch to the nearest Legion branch as determined by their postal code.

Both brought objections from delegates who lived in Winnipeg or Thunder Bay, Ont., where there are several branches within the city. Speakers said a new member should still have a choice of which branch he or she would join.

A third resolution passed once it was amended to say that Dominion Command should notify the nearest branches to where an online member has joined.

A fourth resolution, which called on Dominion Command to discontinue the practice of allowing members to renew their annual membership online, was defeated after command President Ronn Anderson said, “I believe in going forward. This resolution would be a backward step.”

The convention began with a parade and wreath-placing ceremony at Fort Frances Cemetery. A large cenotaph sits in a veterans section of the cemetery where wreaths were placed by Anderson, Dominion Vice-President Angus Stanfield and local dignitaries.

It was followed by opening ceremonies at La Place Rendez-Vous, a resort hotel on the Rainy River across from Minnesota. Mayor June Caul welcomed guests to the traditional grounds of the Ojibwa who signed Treaty 3 in 1873.

Business began the next day with 118 delegates in attendance.

He stressed that the most important area of membership is renewals. A survey in 2017 of non-renewals found there were three main reasons for not renewing membership: 40 per cent did not recall receiving a renewal notice; 41 per cent said they would renew if they could do it online (which was not an option at the time); and 25 per cent found there was a lack of hospitality at the branch.

“We can change this,” he said. 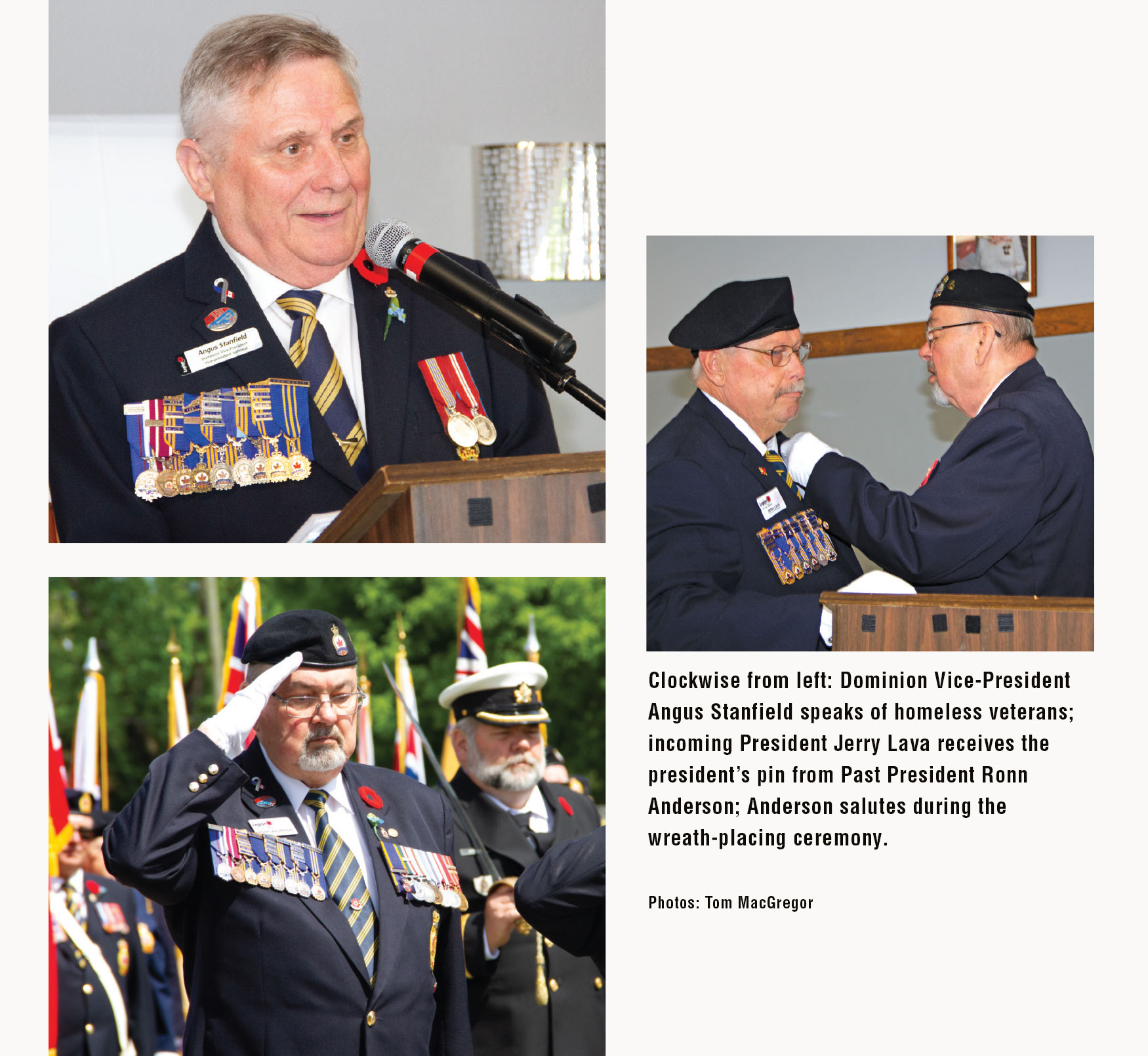 Gordon MacKenzie and his wife Karen of Nipigon, Ont., Branch reported on their experience when Gordon was the command representative on the 2017 Pilgrimage of Remembrance.

Lisa Heshka, a case worker with Veterans Affairs Canada, told delegates that there are 650,000 veterans in Canada. “We need your help to find these veterans and to make sure they know the benefits that are available,” she said. She outlined the department’s programs including the Pension for Life, which came into effect on April 1.

Ladies Auxiliary President Val Anderson reported that since the last convention the L.A.s had donated $497,000 to branches and $17,000 on community projects.

Stanfield brought greetings from Dominion Command and outlined its priorities in the past two years. When asked about homeless veterans, Stanfield said, “It is difficult to find these homeless veterans. They are proud people. You don’t find them in the shelters. They don’t want charity and they don’t like being around a lot of people. You have to seek them out where they are living alone or with friends or family members,” he said.

He also talked of the work Dominion Command does in the Caribbean in support of Commonwealth veterans. Delegates then donated or pledged a total of $6,279 to support the Royal Commonwealth Ex-Services League.

Sports Committee Chairman Rick Bennett stressed that sports events have to be self-financing. He also noted that the deadline for selecting teams for dominion sports events has been moved up to take advantage of cheaper airfares when there is more lead time.

Changing to his position as honourary treasurer, Bennett said the command was in good financial shape owing to one-time income of $170,880 from the sale of the building once owned by the defunct Gen. Sir Sam Steele Branch in Winnipeg.

Delegates were concerned about the fate of the Legion sports camp, which is held over four weeks at the International Peace Gardens along the Manitoba-North Dakota border. Royal Canadian Legion Sports Foundation secretary Sheila Babaian said the foundation spent a considerable amount of money and volunteer labour 25 years ago to repair cabins that were at the Peace Gardens. These repairs included new roofs, windows, siding and new concrete floors beneath the cabins. In return, the Legion was granted free use of the cabins during the summer camp. The Peace Garden now plans to demolish the cabins and build replacement housing for their seasonal staff. As a result, the cabins were not available in 2019 and the foundation was forced to rent construction camp trailers at a cost of approximately $15,000.

Ken Arsenault of St. James Branch withstood a challenge from Jason Lava of Kenora Branch to
be re-elected as Sergeant-at-Arms.

After being installed as president, Jerry Lava said, “I believe we need to make greater use of technology and communications. As we have seen during the presentations at the convention, it is the way forward.”

Throughout the convention, the Local Arrangements Committee at Fort Frances Branch kept the delegates and guests entertained.

Cutbush urged delegates to attend the 2021 convention in Thunder Bay which will mark the 100th anniversary of the Great War Veterans Association’s convention where delegates chose the poppy as their symbol of remembrance.