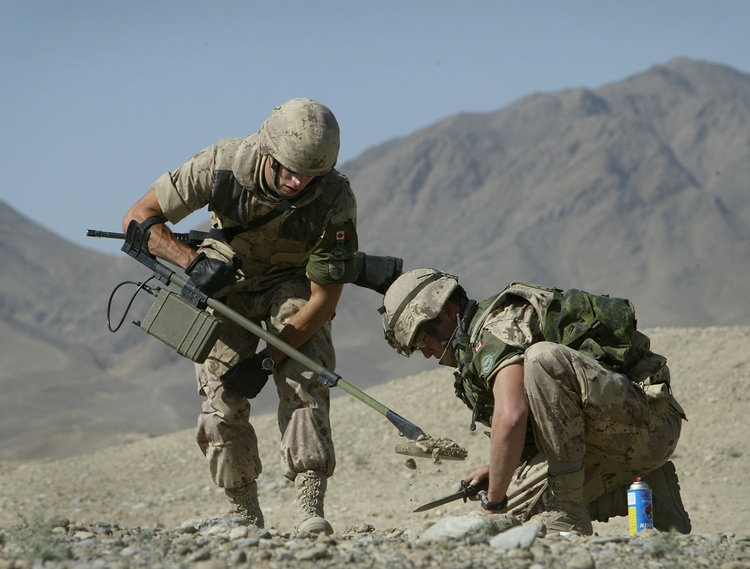 Canadian combat engineers scan for mines outside Kabul in 2003. The spay can marks the spot of a suspected landmine.
Stephen J. Thorne/The Canadian Press
Old landmines, unexploded ordnance and abandoned munitions claimed more than 20,000 casualties in Afghanistan from 2001 to 2018, the vast majority of them civilian, says a new report that serves as a damning indictment of coalition pledges to clean up after of four decades of war in the beleaguered country.

More than 20 years after 122 states signed on to the 1997 Mine Ban Treaty to eradicate and clear antipersonnel mines, known as the Ottawa Convention, the area of Afghanistan contaminated by landmines and what are known as explosive remnants of war (ERW) has almost tripled, says the Brown University report.

The document, published by the Costs of War Project at the Watson Institute for International and Public Affairs in Rhode Island, estimates the amount of Afghan territory made up of old minefields, battlefields and firing ranges covers 1,782 square kilometres. That’s an increase from 636.9 square kilometres when Canada and the United States-led coalition entered the country in the fall of 2001.

Afghanistan averaged 14 to 16 mine-related casualties a day, or 5,800 annually, in the years after Soviet soldiers ended their occupation in 1989 and as the subsequent civil war that brought the Taliban to power ramped up. Casualties peaked at around 600 a month in 1993 and dropped to 88 a month in 2000.

With the war on terror, “a new and more extensive period of contamination commenced,” says the Costs of War Project report, written by two members of the project team, Suzanne Fiederlein and SaraJane Rzegocki of James Madison University in Virginia.

“This period was dominated not by landmines, but by extensive ERW contamination and eventually widespread use of IEDs (improvised explosive devices) by insurgent groups including the Taliban.”

In its heyday, Canada helped clear about a third of the estimated 10 to 15 million legacy mines in Afghanistan, a key element of its engagement there.

Canada was once a leader in the anti-landmine movement, climbing as high as fourth on the list of donors behind the United States, European Union and Japan. But it slashed monies devoted to the global cause a decade ago.

Mines Action Canada reports Ottawa contributed $17.55 million to mine-action projects in 2016, an increase from 2015 contributions and the highest since 2012. But the figure is significantly lower than the all-time high of $62.83 million in 2007, it reports, and considerably lower than the 22-year average of $21.53 million.

By 2017, Canada had fallen to ninth on the mine-action donors’ list. Annual contributions for demining, risk education and victim assistance had dropped more than 80 per cent from the 2007 peak, and most officials with mine action expertise had been transferred or dismissed.

“Canada’s support for the Ottawa Treaty currently has a number of gaps that leave some members of the international community questioning Canada’s recent commitment to its greatest contribution to global peace and security in the past 50 years,” reported Mines Action in 2017, when the anti-mine budget increased to $29 million.

“Canada has not been very active on the Ottawa Treaty diplomatically in recent years. There is little evidence that Canada has been speaking out on the issue publically or privately. Canada’s funding support for the Ottawa Treaty, as it is currently implemented, contains large geographic gaps.”

It said the Canadian approach is also missing some pillars of mine action. Canadian funding in 2016 focused heavily on mine clearance and contained little support for other crucial elements such as victim assistance and advocacy. 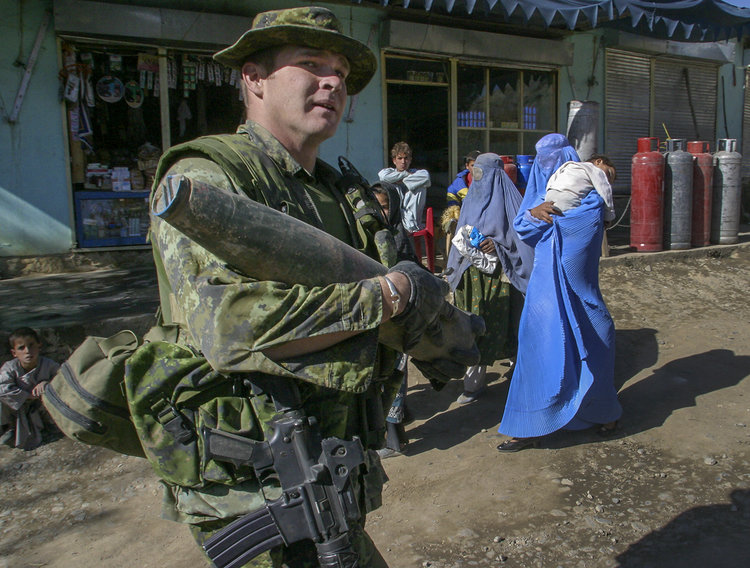 Bryan Toope of Ottawa cradles a 122 millimetre shell the way combat engineers are taught – like a baby. Canadian troops with the 3RCR battle group were clearing old munitions caches northwest of Kabul in 2003.
STEPHEN J. THORNE/THE CANADIAN PRESS
The Landmine Monitor, which tracks mine-related casualties and efforts to meet the tenets of the Ottawa Convention, reported 7,239 mine- and ERW-related casualties worldwide in 2017, 2,793 of them killed.

“The continuing high total was influenced by casualties recorded in countries facing armed conflict and large-scale violence, particularly Afghanistan and Syria,” it said in its 2018 annual report.

The figure marked a decrease from 2016, in which the group recorded the highest number of casualties since it began recording the figures in 1999.

“The total remained far higher than the annual casualty rate of five years ago,” it emphasized. “For a second year in a row, the highest numbers in Monitor history were recorded for annual casualties caused by improvised mines (2,716) and for child casualties (2,452).”

Casualties in 2017 were identified in 49 countries, of which 35 are among the 164 states now party to the Mine Ban Treaty. Eighty-seven per cent of victims were civilians.

The Top 5 mine-action donors—the United States, Germany, the EU, Norway and Japan—contributed 79 per cent of all international funding, with a combined total of US$435.4 million.

The landmines issue spans decades in Afghanistan, beginning with the 1979 invasion by the Soviets, who deployed millions of the devices across the country and along its borders. The former Soviet minefield surrounding the Kandahar base occupied by coalition forces for the past 18 years was once considered the world’s largest.

Mines and unexploded ordnance don’t just create lethal hazards for civilians and soldiers, says the Costs of War Project report, entitled The Human and Financial Costs of the Explosive Remnants of War in Afghanistan. The document is part of an ongoing series compiled by 35 scholars, legal experts, human-rights advocates and physicians since 2011.

“The lingering presence of ERW contamination also inhibits the country’s overall economic development as well as the ability of local communities to engage in livelihood activities to sustain themselves,” it says. “Whether the contamination emanates from minefields, scattered UXO and IEDs or from adjacent firing ranges, the negative impact on economic activities is real and substantial.

“The great majority of the victims have been Afghan civilians who sustained injury long after the conflict concluded for which the landmines and other explosive ordnance were intended.”

Faced with funding challenges and continuing dire statistics, Afghanistan’s national mine-action program may have to seek a second extension to its goal of creating a mine-free country by 2023, the project reported.

For its part, Mines Action Canada maintains that Canada has the resources and the capacity to again be a leader on the issue. All it would take, it said, are “a few small adjustments” at a cost of about $1 per Canadian a year.

“The funds and the diplomatic resources required to make this re-engagement a reality are there, all that is needed is political will. With Canadian leadership, it is possible to end the [global] suffering caused by landmines by 2025.”