Dominion Chairman Bill Chafe and Stephan Gallant salute during the opening parade.
Jennifer Morse
Membership and money, two of the Legion’s biggest challenges, were highlights of the 65th Prince Edward Island Command Convention held May 23-25 in Cornwall, a community 10 kilometres west of Charlottetown.

It was spring in P.E.I. The red earth had just been tilled and bright green seedlings were breaking through—all against a brilliant blue sky. The mood of the 52 delegates was as warm as the weather and they quickly got down to the business of convention at the Cornwall Curling Club and Civic Centre.

“I am very pleased to state that P.E.I. has achieved 100 per cent of our paid membership for 2018 as compared to 2017. This is higher than every other command in Canada,” Membership Committee Chairman Duane MacEwen told delegates. “Last year, there were 2,010 paid members on the Island—six of whom have over 70 years of continuous service…. Currently, we have the second highest renewal rate in the country.”

P.E.I. Command President Stephen Gallant welcomed delegates with good news. “Command financial affairs remain stable, mainly due to the success of the military service booklets produced by Fenety Marketing,” he said. In 2018, proceeds grew to $42,034, more than 50 per cent of the command’s revenue. Since the program began 14 years ago, the booklet has generated more than $524,000 in revenue for P.E.I. Command. Later, CEO Mark Fenety talked about the success of the commemorative booklets, which have been adopted by eight commands across Canada. “Annually, these generate over $1.1 million to the Legion,” he said.

Provincial Vice-President Owen Parkhouse, who is also a dominion vice-president, briefed convention on the command’s homeless veterans program and how branches can help. “Legion members are the boots on the ground helping homeless veterans find the support they need,” he said. “We have identified three veterans who are homeless, but it is very difficult to find them. We have gone to shelters, the Salvation Army and more to identify them.”

The Homeless Veterans Program will be part of the Veterans, Service and Seniors program. A letter is being sent to each branch asking for $250 to set up an initial fund of $5,000.

“Our shared mission is to support veterans,” Dominion Chairman Bill Chafe reiterated. He screened two videos from Dominion Command and briefed delegates on some of the initiatives in place to help veterans at the national level. He also addressed the business of attracting members to the Legion. “Our top priority is membership…. At the executive level we took a look at where we are now and where we want to be. We created a new strategic plan and we are  modernizing infrastructure, improving internal and external awareness, creating a welcoming culture, celebrating members and volunteers and improving governance,” he said.

Since 2017, provincial bylaws were revised and made available online, Vice-Chairman Gilles Painchaud explained during his presentation on the command policy manual, highlighting additions, revisions and a new section on harassment and discrimination.

RCMP Corporal Andy Cook gave a presentation on outlaw motorcycle gangs. “Unfortunately we do have a number of outlaw gangs in P.E.I.; two of them, Hell’s Angels and the Bacchus, are one per cent clubs,” he explained. He spoke of the wearing of colours as a way for the gang to claim its territory. “Conflict ensues over this…. The patch trumps your motorcycle, your house and your possessions. These clubs are criminal organizations…and they come to our island every year…. If you are uncomfortable and you want them out of your facility, just call us and we will come and help,” he advised delegates.

Auditor Michelle Burge took delegates step-by-step through the financial statements and reported an overall surplus of $22,048 in 2018. Revenue was down approximately $8,000 from 2017, but expenditures were also down.

Finance Chairperson Linda Curtis also briefed the delegates on command finances and confirmed that they ended the fiscal year with a surplus and are projecting a deficit of $1,350 for 2019.

Queens County Zone Commander Alan Crane asked about the balance of spending on various programs, comparing the expenditures on youth programs ($8,000 to track and field) to veterans programs ($12,000 for the service officer). He wondered if there should be a requisite return for the amount of money spent on track and field.

Island members remain generous, donating $4,879 for Caribbean veterans. Currently, the Legion is responsible for 51 veterans and 89 widows in 16 countries in the Caribbean, as a founding partner of the Royal Commonwealth Ex-Services League. 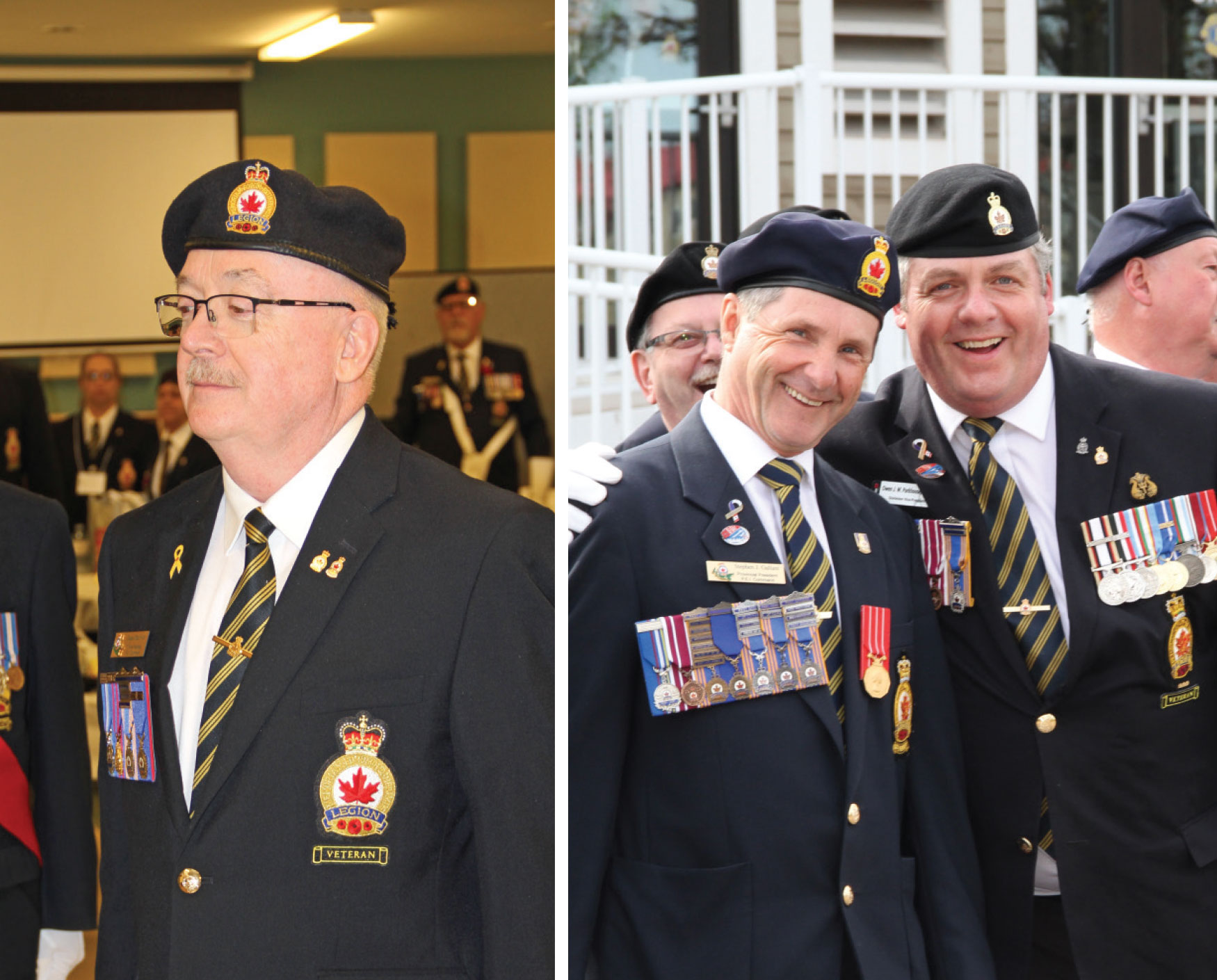 The colours were snapping in the breeze as delegates formed up for the parade late Friday afternoon. Among those placing a wreath at the local cenotaph were Memorial (Silver) Cross Mother Dianna MacDougall, parade marshal Kevin Trainor, Chafe, Nova Scotia/Nunavut Command President Marion Fryday-Cook, Gallant, colour party commander Patrick Doyle and Chairman Claus Brodersen. Ceremonies have been conducted at the Cornwall cenotaph for 100 years. The local paper, the Guardian, reported “This memorial was created…by the united efforts of a grateful people, who so generously subscribed their money and made the cenotaph possible.”

That evening, Kingston Branch in New Haven hosted the delegates, guests and VIPs for a roast beef supper served by a local cadet group. In attendance was Lieutenant-Governor Antoinette Perry, who reminisced about her family’s involvement in the Legion and the warm welcome of volunteers. Veterans Affairs Minister Lawrence MacAulay and federal member of Parliament Wayne Easter also addressed the group, which included Veterans Affairs Deputy Minister Walter Natynczyk.

Everyone was looked after by the Local Arrangements Committee led by Crane. The hospitality included the supper, a meet-and-greet and hot lunches.

Saturday morning dawned sunny and crisp and Legionnaires got back to business issues.

Two resolutions were brought forward and both were approved. The first, a finance resolution, no longer required a one-dollar per capita tax to be applied to the Veterans’ Memorial and Charity Fund. The second, from West Prince Zone, adds washer toss to the provincial sports list on a trial basis.

While delegates awaited the results, Painchaud made a presentation on his experience as a pilgrim on The Royal Canadian Legion’s 2017 Pilgrimage of Remembrance.

John Yeo of Charlottetown Branch, Brodersen of Kingston Branch and Perry all ran for Chairperson. Brodersen declined the nomination and Yeo was elected.

There were five nominations for Vice-Chairperson including Brian Rector of Montague Branch, Painchaud of Wellington Branch, Marché, Doyle and Perry. Painchaud and Marché declined nominations and Rector was elected.

MacEwen said he was honoured to be elected president and thanked delegates for their support. The convention ended as warmly as it began.

“A friendly smile and a warm handshake often leads to new members,” said Chafe earlier. “When you see a veteran, thank them for their service and offer your hand in friendship.” This is
a natural in P.E.I.