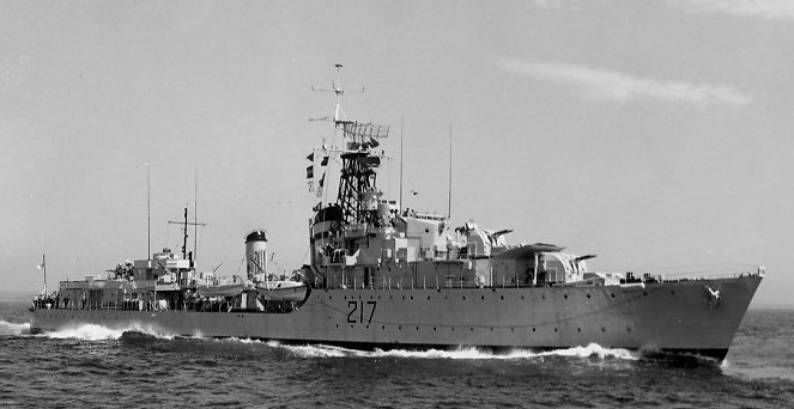 HMCS Iroquois, a Tribal-class destroyer, was the only Canadian navy ship to suffer losses due to enemy action during the Korean War.
Wikimedia

HMCS Iroquois was on its first tour of duty in Korea, under frequent fire as it patrolled the peninsula’s east coast, itself frequently firing on North Korean rail lines.

A tunnel near Songjin on the main rail line carrying war supplies from Russia to North Korea was frequently shelled and under constant repair. It was the target for about two hours on Oct. 2, 1952, as Iroquois worked to keep repair crews from bringing the line back into operation.

In the petty officers’ mess, Peter Fane was positioned to pass shells from the ship’s magazine to the gun battery on the deck above. Suddenly over the ship’s broadcast system came the words “Alarm, surface port, gunfire.”

Shells destroyed the gun overhead. “Our secondary armament consisting of a twin three-inch, 50-calibre gun and one of our Bofors [anti-aircraft] gun batteries opened fire and quickly silenced the battery,” Fane recalls in a Memory Project interview.

Lieutenant-Commander John Quinn was killed, as well as Elburne Baikie, a loader who had been holding a four-inch shell, which exploded. “This shell hit the deck between the legs of another gun loader [Wally Burden] and he fell through the hole with both legs blown off.” Able seamen J.A. Gaudet and E.M. Jodoin were seriously wounded and eight others suffered splinter wounds.

Burden “lasted for about five hours before he succumbed to his wounds.” He had asked Commander William Landymore, who later became a rear-admiral, that he not be buried at sea.

The ship transferred its dead and seriously wounded onto a U.S. navy tanker on its way to Japan, and returned to duty after a short memorial service.

“The next day, we re-entered the bay where we had been hit and were closed up at action stations for just over an hour and a half,” said Fane. “I think this was the longest period of time any of us lived, for we had no way of knowing if the North Koreans had brought in another field gun battery. Thankfully they hadn’t.” Iroquois, with help from a spotter aircraft, picked off the main North Korean gun battery and several smaller ones, putting them all out of action.

The dead crew members were buried with full military honours in the Commonwealth war cemetery near Yokohama, Japan.