The exhibition traces the highland warriors from the 16th century through the European wars up to Afghanistan.
Luc Normandin

The skirl of the pipes can be heard at the Canadian War Museum in Ottawa during a new exhibition dedicated to highland soldiers and the units they formed during the 20th century. The exhibition, Highland Warriors, opened June 7 and will run until Jan. 12. It features more than 200 artifacts from the war museum and the Glasgow Museums in Scotland.

“You have some wonderful artifacts here in the Canadian War Museum, especially your war art,” said the exhibition’s curator, Allan Carswell, who was the curator of the National War Museum of Scotland at Edinburgh Castle.

The exhibition has three sections. The first deals with the clans of Scotland and their traditions. The second shows how the British Army raised highland regiments to fight in its own wars in Europe. The third part deals with the Scottish experience in Canada.

In the Middle Ages, the Scottish Highlands—the rugged, sparsely populated region in the northwest—were organized around families, or clans. They often clashed among themselves until the 17th century, when a few clans dominated large territories. Military service was a duty owed for the land a family kept.

The warrior was often idealized in poetry and later novels such as those by Sir Walter Scott. The ideal highland soldier was brave, fit and skilled at handling weapons.

The basket-hilted broadsword was the weapon most associated with the warriors. The Scots became skilled at creating the iron hilts but the blades were imported from Germany. Eventually pistols and muskets were added to the warrior’s array of personal weapons.

After the failed Jacobite rebellions, which attempted to restore the Stuart family to the English throne, laws were enacted to outlaw much of the clan culture, including the use of weapons and even the wearing of tartans.

At the same time, the British Army recognized the value of the highland warrior, recruiting highland regiments for the wars in Europe, especially those against Napoleon’s formidable army in France during the early 19th century. 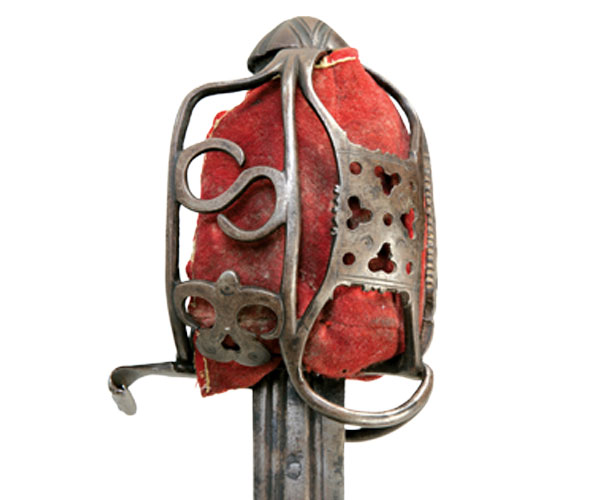 A basket-hilted broadsword (inset) was the weapon traditionally associated with the highlander.
CWM

After Confederation in Canada, the British withdrew their garrison troops and a strong militia system grew in Canada. Many of the militia units took on highland names and adopted the traditions, especially the tartan dress and the playing of bagpipes.

Highland troops were instrumental in repelling the Fenian raids in the 19th century.

Canada’s highland regiments distinguished themselves in both world wars. The exhibition features the pipes and the Victoria Cross awarded to James Richardson, who was born in Scotland and raised in Canada. While serving in the 16th Battalion (Canadian Scottish) of the Canadian Expeditionary Force during the Battle of the Somme, Richardson showed great bravery by calmly playing his pipes to encourage his comrades to go forward through barbed wire. Later the same day, he returned to the front to retrieve his bagpipes and was never seen alive again.

“Today, there are more highland regiments in Canada than in the British Army,” said Carswell.

The exhibition shows the highland tradition up to the present day with a display of the camouflage shirt and medals earned by Lieutenant-Colonel Nicholas Calder of the Royal Regiment of Scotland in Afghanistan in 2008.