The near-sinking of HMS Nabob 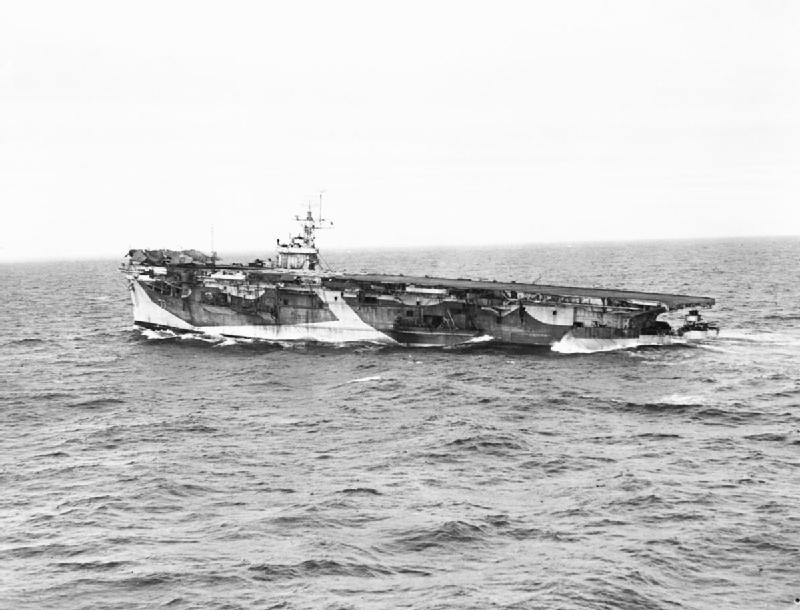 HMS Nabob limps back to port with its stern low in the water after an attack by a German U-Boat.
Wikimedia
In the opening years of the Second World War, the Royal Canadian Navy quickly recognized how useful naval airpower could be in the battle to keep the convoy lifeline to Britain safe from Nazi submarines, battleships and aircraft.

Aircraft carriers could extend convoy protection to the mid-Atlantic, beyond range of land-based aircraft. But as the groundwork was being laid for a Canadian naval air branch, there were very few of these large craft available. How were Canadian sailors to gain experience?

At the time, Britain had a shortage of manpower. Thus, when HMS Nabob, a U.S.-built carrier supplied to Britain under a lend-lease program, arrived in Liverpool on April 5, 1944, it had a mixed crew. Canada supplied sailors to crew the ship, including commanding officer RCN Captain Horatio Nelson Lay, and Britain provided crew for the air operation, running Grumman Wildcat fighters and Avengers of 852 Squadron.

After taking command, Lay immediately addressed a morale problem caused by differences in quality of food and pay between the two navies, recommending they be raised to Canadian standards, “if necessary this being a commitment of the Canadian navy.” Britain approved—but did not take up his advice to change the name of the ship to HMCS Nabob.

After training and refitting to British standards, Nabob joined the British Home Fleet in the Orkney Islands Aug. 1, 1944, and was assigned to Operation Offspring, meant to force German shipping out of the protection of Norwegian islands and fiords into open water.

In mid-August, Nabob joined the operation intended to sink the German battleship Tirpitz, which had been using Norwegian fiords for cover since 1942, and was a constant threat to Russia-bound convoys.

On August 22, four Wildcat fighters from Nabob provided cover for the fleet hunting the Tirpitz. After their return, the carrier was assigned to fuel some destroyers.

Just after 5 p.m., when the daily rum issue was being dispensed, a 227-kilogram German torpedo ripped a hole 10 metres in diameter below Nabob’s waterline and the stern quickly sank about four metres. Electrical power was cut off and the main engines shut down. The powder and bomb storage areas, along with the galley and some crew berths, were flooded. But the engine and propellers were undamaged.

“Looking at her from a distance of seven miles [11 kilometres], I never expected her to survive,” said Rear-Admiral R.R. McGrigor, quoted in a 2010 article by Shawn Cafferky in Canadian Military History.

The carrier was saved from sinking by its British modifications during refitting—including measures to prevent explosions of aviation gas and the installation of extra buoyancy drums to reduce list in case of a torpedo hit. It was also lucky that a second 726-kilogram armour-piercing bomb launched by the U-boat failed to explode after it hit the carrier.

At about 6:15 p.m., 214 men were transferred to HMS Kempthorne. By seven o’clock, after feverish work by remaining crew, it was determined Nabob might be able to limp back to port, although its stern was lower than the bow, and the flight deck was canted.

Nearby destroyers took on 173 men of 852 Squadron, and the next day a further 202 crew were transferred to HMCS Algonquin.

As the carrier slowly made its way to safety 1,600 kilometres away in the Orkney Islands, a stalking U-boat was detected and two Avengers were launched from the sloping deck to chase it off. But then the pilots had to land on that same canted deck. One landed safely, but the second crashed and damaged six other aircraft.

Losses included 11 Canadian and 10 Royal Navy crew killed or missing due to the explosion, two aircraft that had to be jettisoned after the crash landing—and Nabob itself. Too damaged for economical repair, the carrier was cannibalized for parts, then decommissioned, sold and converted into a merchant ship.

PrevPrevious ArticleBetty Metcalfe: “I lost my brother to a Nazi executioner”
Next ArticleOn track, part 1Next