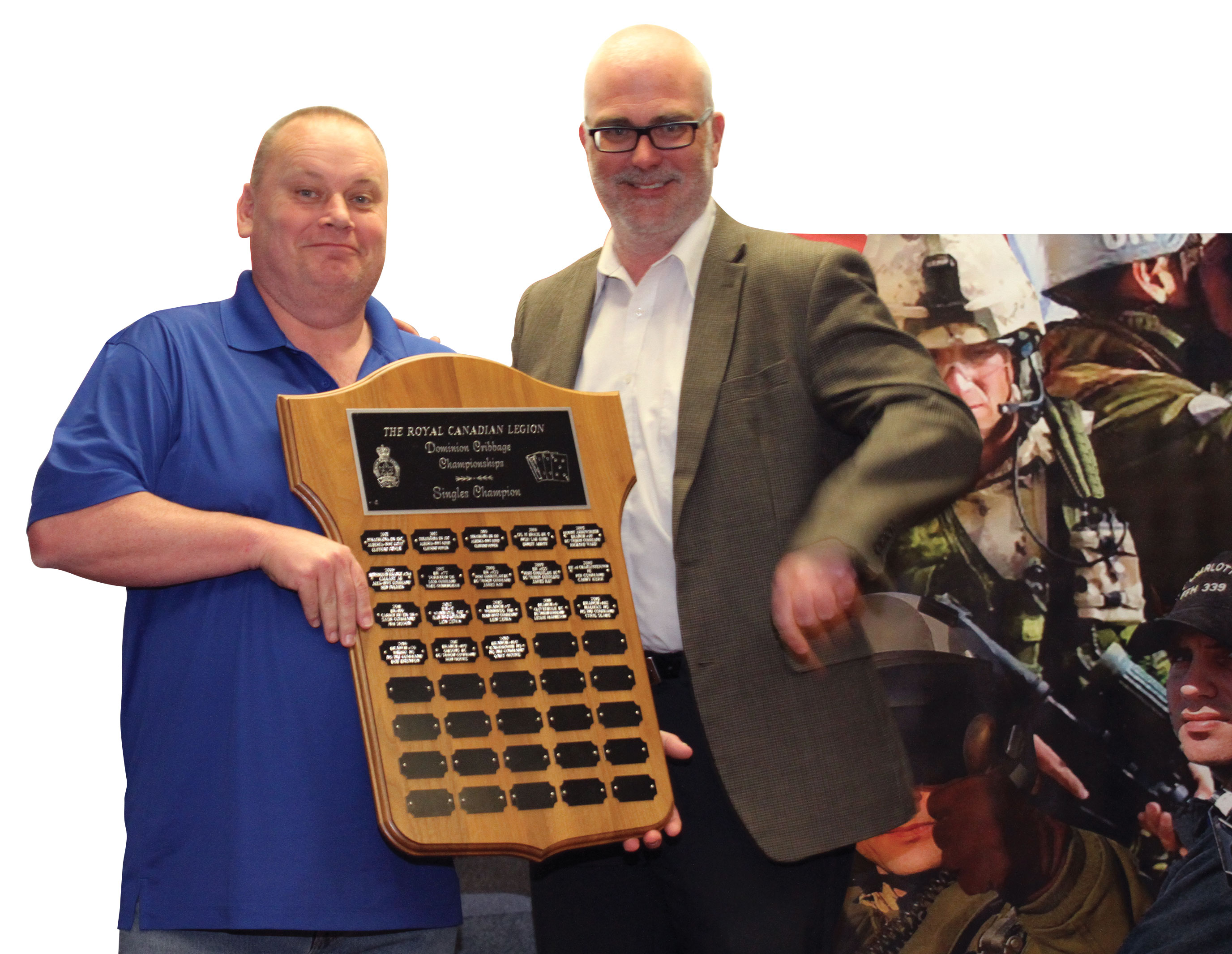 A rare and remarkable feat occurred at the Legion’s Dominion Command Cribbage Championships at Westboro Branch in Ottawa on April 26-28. Bill Nelligan of Cranbrook, B.C., Branch won all 18 games to capture the singles title.

“When I got halfway through I said to myself, ‘I wonder if anybody’s ever gone undefeated? And I said, hopefully, I could do it.’”

And so he did—but he modestly attributed his feat to luck.

“It’s all lucky cards, especially the cuts,” he said, grinning ear to ear. “There’s skill, but you got to get lucky cards.”

The luck came when he pegged out while his closest competitor, Linda Beckman of Tecumseh-Stoughton Branch in Saskatchewan, “was in the stink hole,” and one point away from winning the game. They were close at the 2018 championships, too, when Beckman edged him out to take second place.

The skill was gained over a lifetime of play. “I’ve been playing since I was three years old. My parents taught me, because there were eight kids. We played lots of cards.” It was cheap entertainment. “My dad (Doug Nelligan) was in the air force and didn’t make much money.” In addition, as is common in military families, they moved a lot.

“I love the game; it’s fun,” said Nelligan. He also likes how Legion cribbage builds cross-country friendships. He visited Nova Scotia at the invitation of the 2018 singles champion Gary Moore, and intends to return the hospitality.

It was an edge-of-the seat sort of tournament. The doubles championships came down to a tiebreaker and there was an upset in the last set of the team event.

By the middle of the doubles match, Newfoundland and Labrador and Nova Scotia/Nunavut were vying for top spot, with Alberta-Northwest Territories and B.C./Yukon duking it out not far behind.

Coming into the last set, any one of the four teams could take the title, if fate smiled. 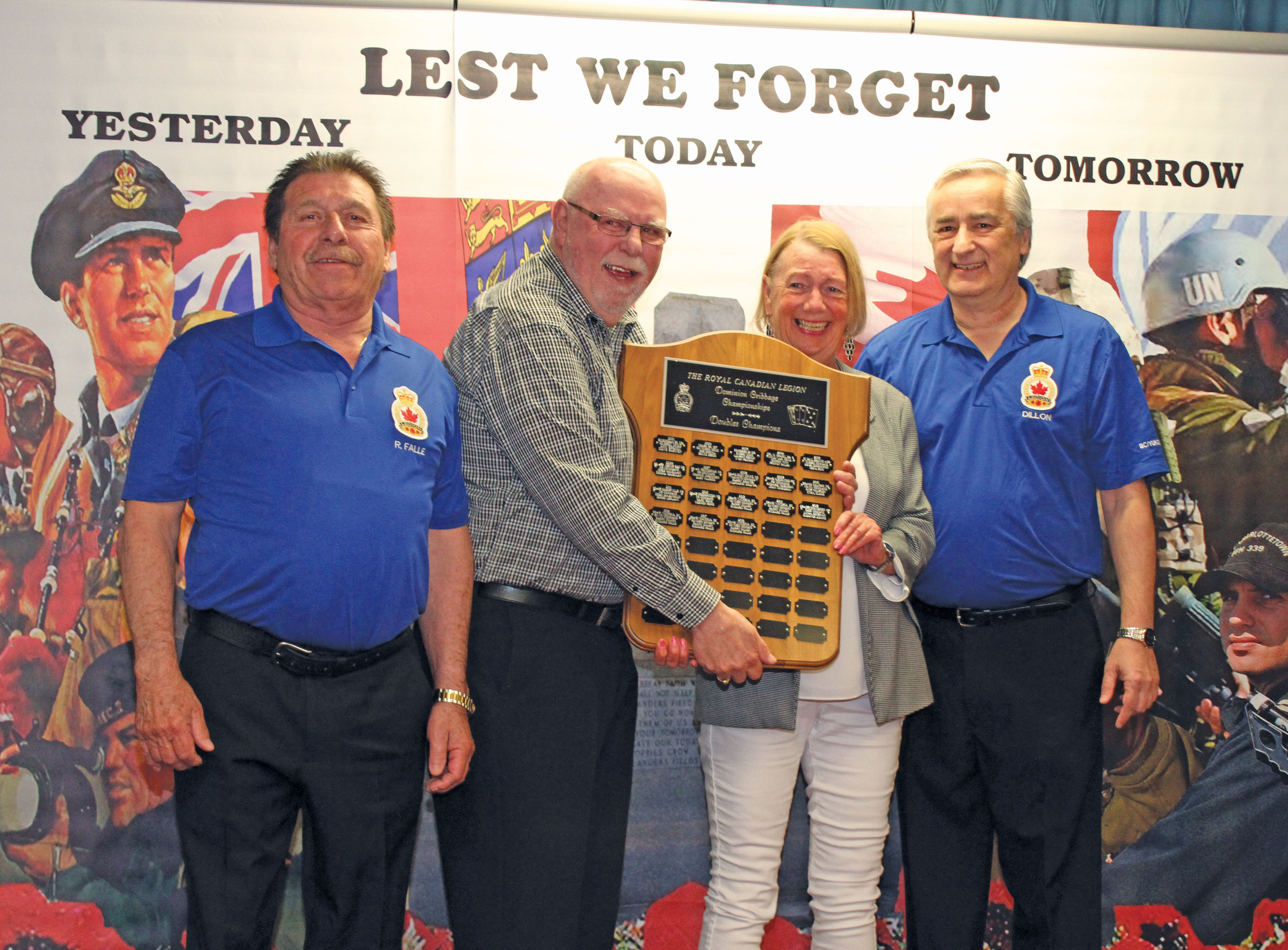 B.C. and Alberta ended the tournament tied for third at 14 points, while the teams from Grand Falls, N.L., Branch and Harding, N.S., Branch faced off in the tiebreaker.

When points were tallied, Newfoundland’s Anne Dubuc and Dennis Fewer, new partners making their first appearance at dominion-level, were shocked to find they were in the running. “We don’t follow the scores, so we had no idea how well we were doing,” said Dubuc.

“We’d win one, then lose two, then win another,” said Fewer. “We didn’t know how close we were.”

The B.C. duo of Barry Dillon and Richard Falle, who have won the event five times, presented the doubles trophy. “We’re glad to see somebody else take a turn,” said Dillon, who kissed his fingers and rubbed them over the engraving of his name before handing the plaque to the new champions.

The team event ran all day Sunday. The team from Alberta—Cherry Baird, Andy Gauthier, Dwight Baird and Arnie MacAskill of Lacombe, Alta., Branch—was the only one to win all four games in the first set, but because an extra point is awarded for a skunk, three teams tied at four points.

The Lacombe team finished third at Dominions twice before, and were hoping their third attempt would be the charm.

Midway through the tournament, Alberta had 17 points, and James McCaffery, Ronald Sherwood, Edward McFadzen and Kathryn Sullivan of Fredericton Branch, had 14. But fortunes began to change. At the end of the eighth set, Alberta was ahead 24-23. In the last set, Alberta lost all four games, while New Brunswick won all four.

Every member of the New Brunswick team was surprised to win the title.

“I never dreamt we’d do so well as we did today,” said Sullivan. None of the team members followed the scores. “We just kept to ourselves and we won 12 out of 18 games.”

“It’s not a good thing to keep track,” added Sherwood. “That’s when you get nervous and lose every trick.” He said winning the national title was even more thrilling than the time he played a perfect 29 hand. “I lost that game,” he laughed. 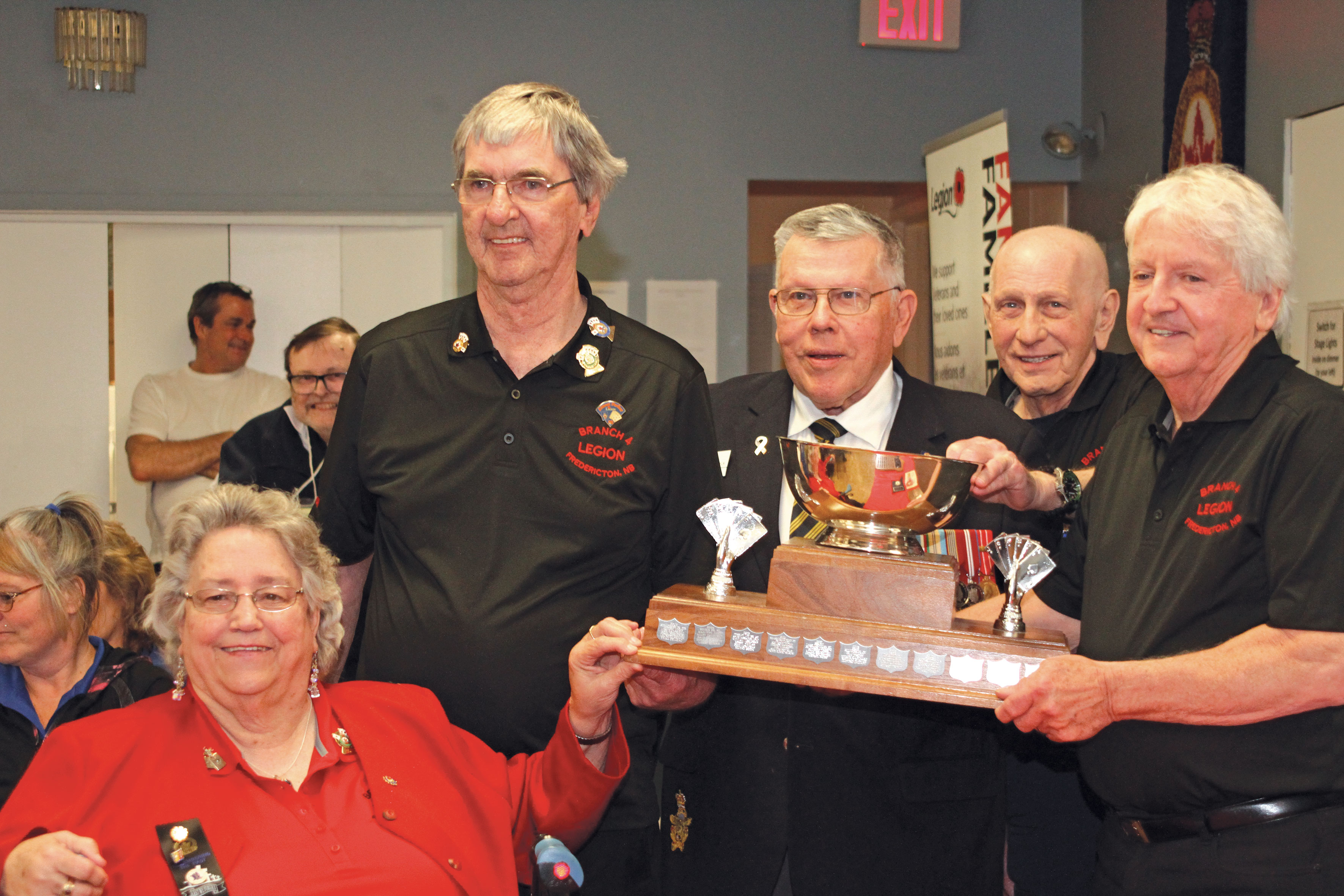 Competition was fierce, but friendly, Dominion Command Sports Committee Secretary Lia Taha Cheng said at the closing ceremony. “Congratulations to all competitors…and thank you to Westboro Branch for going above and beyond…. It’s truly an accomplishment worth celebrating.”

Chartered in 1948, the branch’s name was changed to Westboro from Nepean in 1985.

To accommodate growing membership, the branch bought and renovated a former grocery store in 1973, and added a second storey five years later. Today there are 240 members. The tournament was held in the capacious downstairs hall, entertainment in the upstairs lounge, which has a dance floor surrounded by a fantastic mural depicting military history.

“We’d consider doing it again—just not too soon,” joked President Doug Cody who was also chair of the Local Arrangements Committee.

The tournament is a new benchmark for the branch, which is bouncing back from operating under a board of management.

“We were very close to closing,” said Cody. “But we had some people say, ‘we don’t believe this should happen,’ and pitched in and made a difference. We are indeed on a better financial footing.”

“This event shows that we can handle something big,” said Cody. “We’re showing ourselves and our community that we can make things work.”