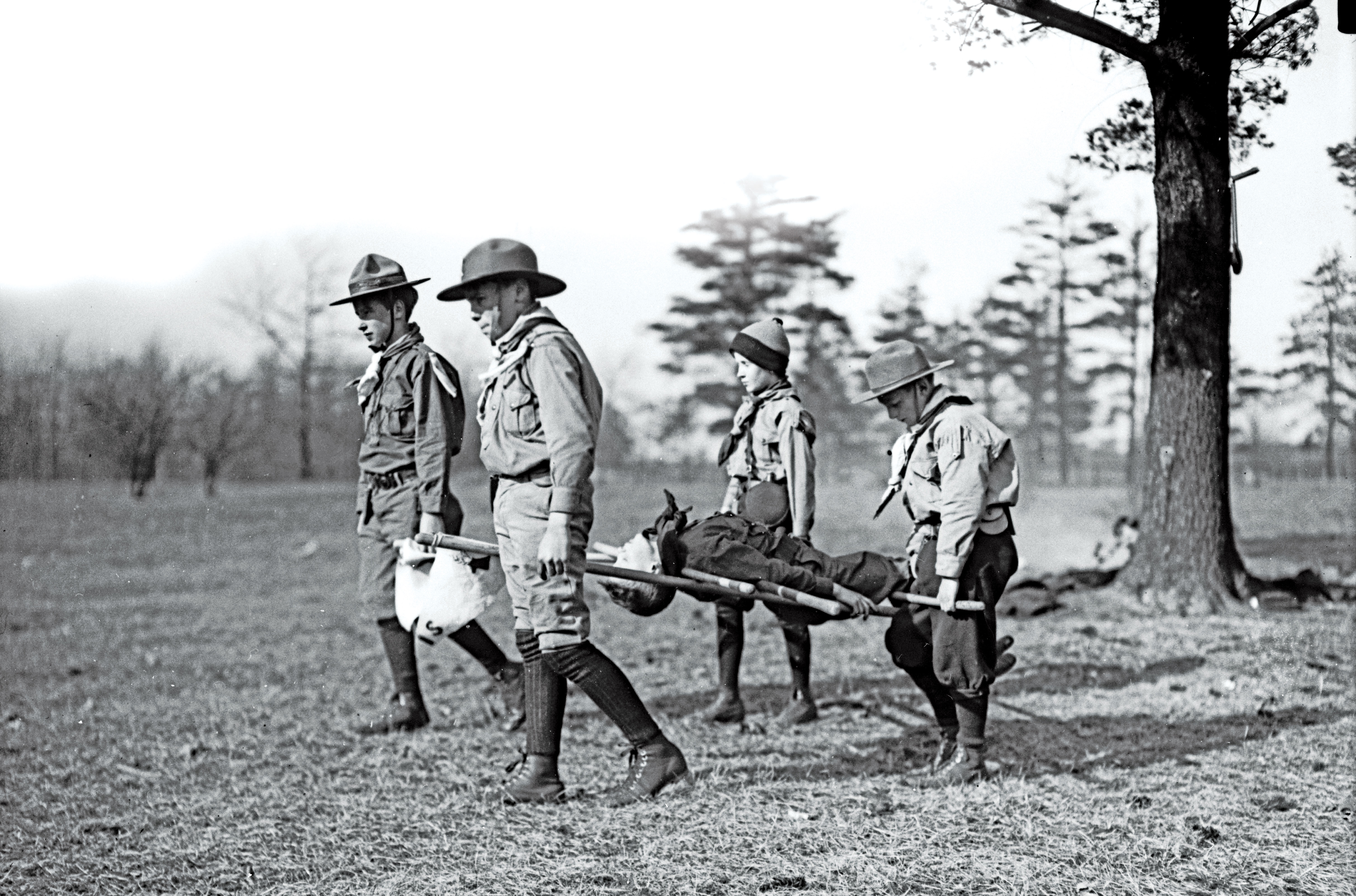 Scouts practise being stretcher-bearers. They would often assist in the military hospitals being built as the First World War continued.
John Boyd/LAC/PA-060795

The mottos of all factions of the Boy Scout and Girl Guide movements include pledges to help others. Wartime records show that contributions of the young members more than lived up to their mottos “Lend a Hand,” “Do a Good Turn Daily” and “Be Prepared.”

In September 1943, 11-year-old Donald Penrose, a Wolf Cub in the 40th Deer Lodge Pack, received a 700-hour war service badge, setting a record for Cub war work in Manitoba and possibly all of Canada. He earned his badge by volunteering to do a series of war service tasks during the Second World War—collecting magazines, knitting, sewing quilts and making doughnuts. The Boy Scouts annual report noting his badge presentation also added that in addition to his volunteering, Penrose “still finds time to do piano practice daily.”

Although the number of hours Penrose devoted to performing good deeds was particularly noteworthy, he was not the only young person volunteering across Canada. Thousands of Cubs (ages eight to 10), Scouts (11-17) and Rovers (18 and older) gave their time, talents, money and possessions during the war years, too.

Among the badges Scouts could earn during the two world wars was the 100 Days of War badge. It was given to Scouts “who have served on farms for three months without pay,” wrote Frederick L. Perot, acting organizing secretary of the Boy Scouts Association Canadian General Council, in the Canadian Boy magazine in 1918. 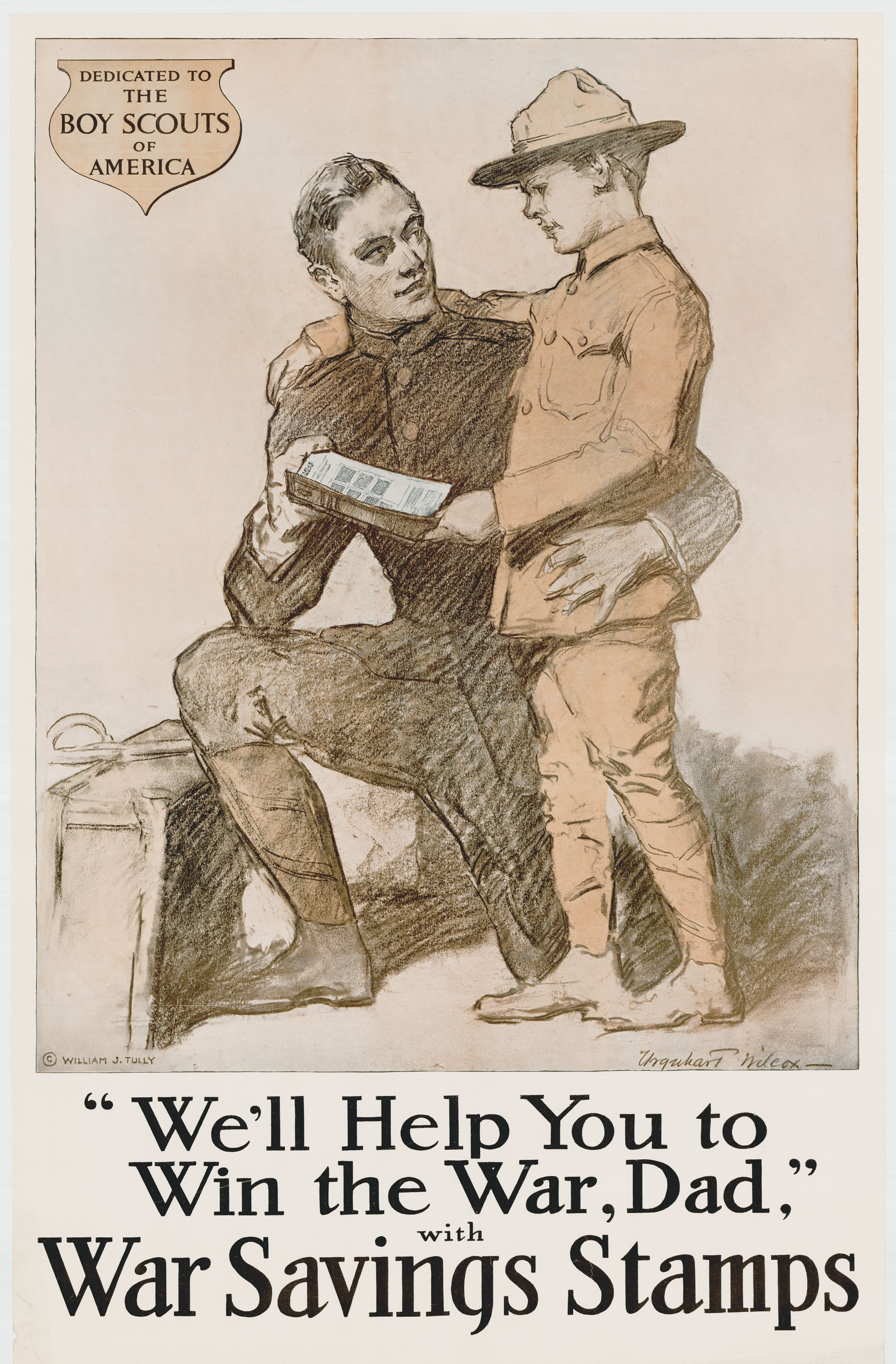 During those years, countless numbers of Scouts in Canada served as messengers delivering pamphlets and posters, and acting as telephone operators in connection with Victory Loan, Red Cross and Community Chest financial campaigns. They were also runners at the conference of United Nations Relief and Rehabilitation (UNRRA) held in Montreal in September 1944. They maintained salvage drives collecting, in particular, many hundreds of tonnes of waste paper and thousands of medicine bottles for military and naval hospitals. They delivered 35,000 handbills and posters for government organizations and helped refugee mothers and children in Canada. At the request of the Department of Agriculture, along with Cubs, they gathered milkweed floss for use in life preservers.

The red badge was awarded at the end of the First World War to Boy Scouts who had spent more than 100 hours volunteering for the war effort. Tasks included collecting salvage or reading materials and making bandages.
Scouts Canada National Museum, Ottawa

Their good deeds also included raising $1,800 through salvage campaigns to buy an ambulance for the Royal Canadian Air Force, sending 1,000 pounds of vegetable seeds to Britain, and running a drop-in centre in Halifax, called the Tweedsmuir Room, for servicemen who had been Scouts.

A report in the 1944 Scout Leader noted that donations to the BP (Be Prepared) Chins-Up Fund were being used to print Robert Baden-Powell’s Scouting for Boys and other scouting publications “in the language of five European countries, which have been overrun by the enemy.”

The Scout Leader that year also reported that “Canada needs 20,000 tons of waste paper per month” and that “Halifax Scouts and Guides collected 70 tons of waste paper in a week’s drive,” pointing out that “three freight cars were filled and a fourth partially filled with this valuable salvage.”

In March 1916, a Boy Scout hut was erected at the Canadian lines near Ypres, Belgium, and moved with the Canadian troops to the Somme. That hut was purchased with money raised by 10-cent subscriptions from Canadian Scouts.

• The 10th Toronto Scout Troop collected 15,000 pounds of salvage, using the money they earned to buy vehicles for the RCAF and Victory Bonds.

• Delhi, Ont., Scouts collected jams that were shipped overseas by the Women’s Institute.

• Cubs of Sainte-Anne-de-Bellevue, Que., made checker sets for soldiers.

• Rouen-Noranda, Que., Scouts assembled 470 potato bags in response to a call, plus some 10,000 magazines for merchant seamen.

• The Halifax district camp, Lone Cloud Reserve, was placed at the disposal of sailors and marines of the Royal Navy as a rest camp between convoys and battles with U-boats. 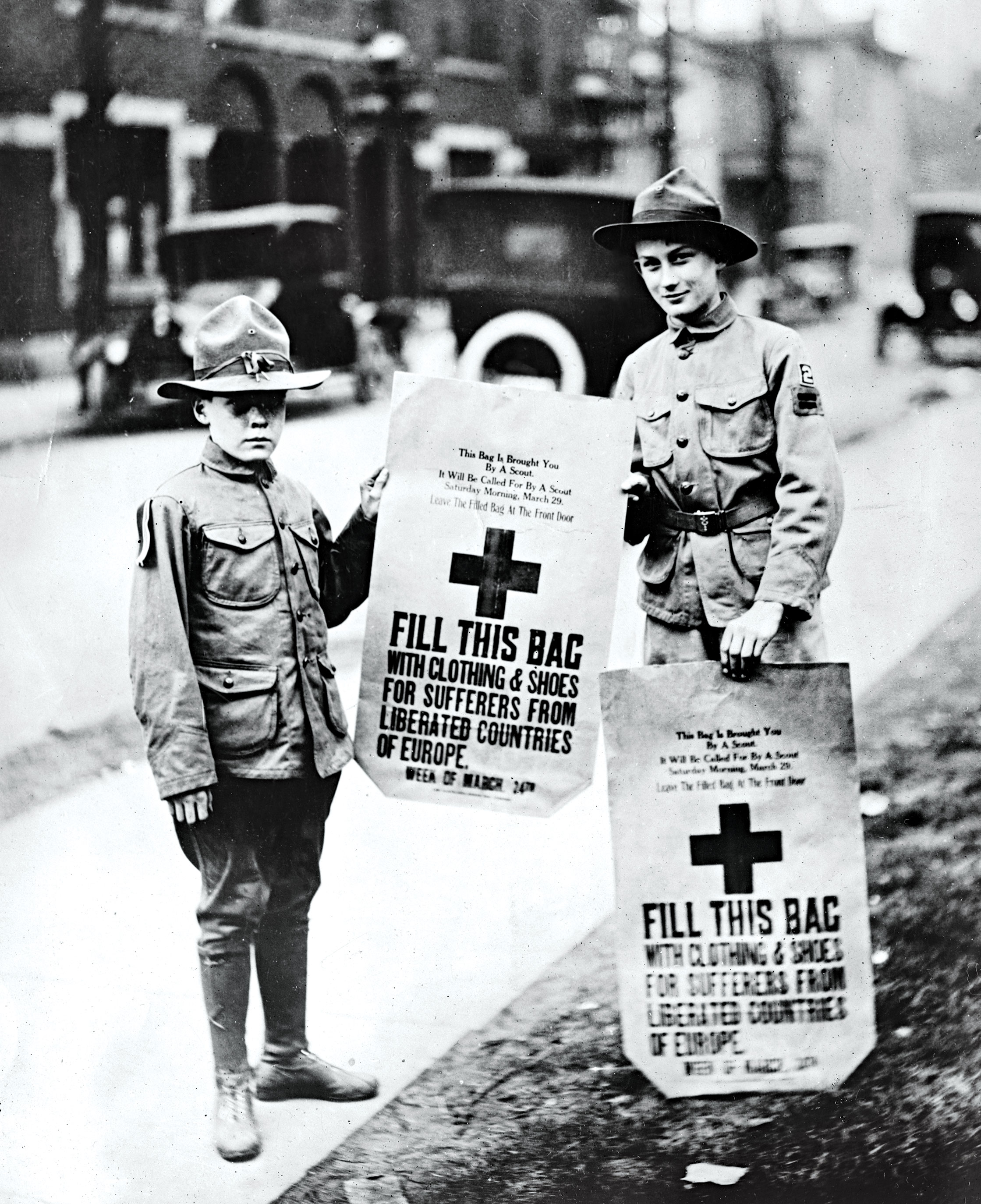 Scouts collect clothes and shoes for the Red Cross to distribute to refugees and other people displaced by the First World War.
Library of Congress/LC-A6197-RC-2326

Members of the Girl Guide movement in Canada played an equally important role on the home front.

Throughout the First World War, Guides across the country worked in munitions factories, made surgical dressings and bandages, knitted socks for soldiers, helped distribute leaflets for war relief societies, collected paper for Red Cross funds and prepared khaki cloths and made shirts and other articles of soldiers’ clothing in factories. The latter meant there was little time to access machinery to make Guide badges, so they hand-embroidered them onto their uniforms.

Guides across Canada set up the Guide Overseas Gift Project in 1941. Through it, they knitted and sewed almost 30,000 articles of clothing, ranging from booties to overcoats, and shipped them to England for children who were bombing victims. Other contributions included a 1940 donation of $11,000 to the Empire Guide Gift Fund to help purchase air ambulances, a motor lifeboat, five mobile canteens, two huts and 20 ambulances for the Royal Navy. Still others knitted squares, quilted, filled ditty bags and made scrapbooks of events in Canada for the Navy. They knitted socks and scarves for military members overseas and became pen pals, writing to soldiers, sailors, airmen and others in Britain. 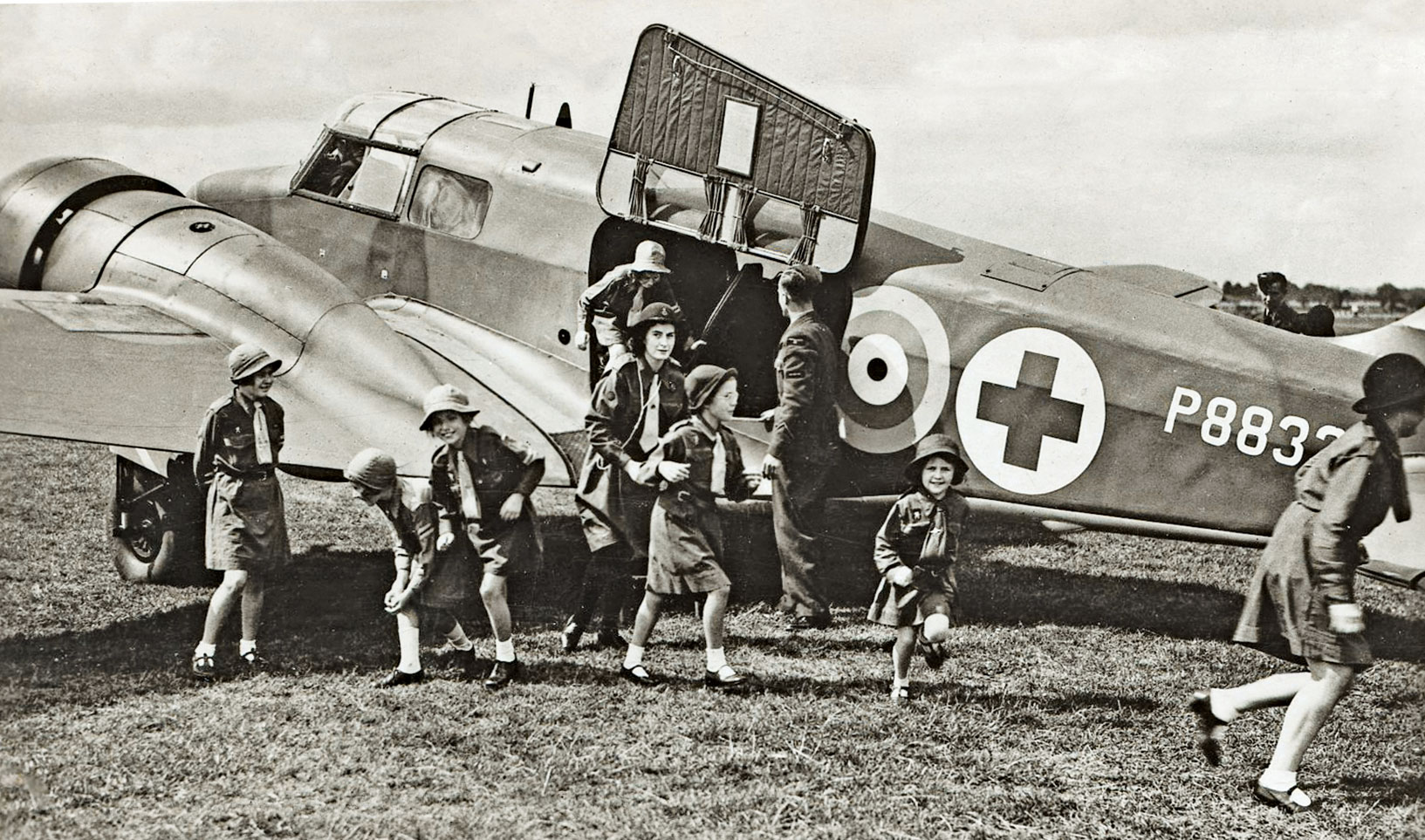 Guides and Brownies visit one of two air ambulances purchased from donations they raised all over Canada in 1940.
Library of Congress/LC-A6197-RC-2326

Boy Scouts and Girl Guides both helped soldiers’ families requiring aid at home. As part of a major national effort during the Second World War, they shovelled snow, tended furnaces, removed ashes and brought in wood during the winter. In the spring and summer months, their good turns revolved around taking down storm windows, helping with gardens and cutting lawns.

Like the Scouts, individual Guide companies made numerous contributions, including:

• The 10th Calgary Ranger Company went on alternate meeting nights to the local military hospital and made almost 30,000 dressings.

• The Robin Patrol of the 1st Wawota, Sask., Company made and sent clothes for a newborn to Britain through the Overseas Gift Project. The mother who received it named her baby Robin.

• Nepean, Ont., Girl Guides and Brownies wrote letters to Guides in Arnhem, Netherlands, and sent them parcels of clothing. 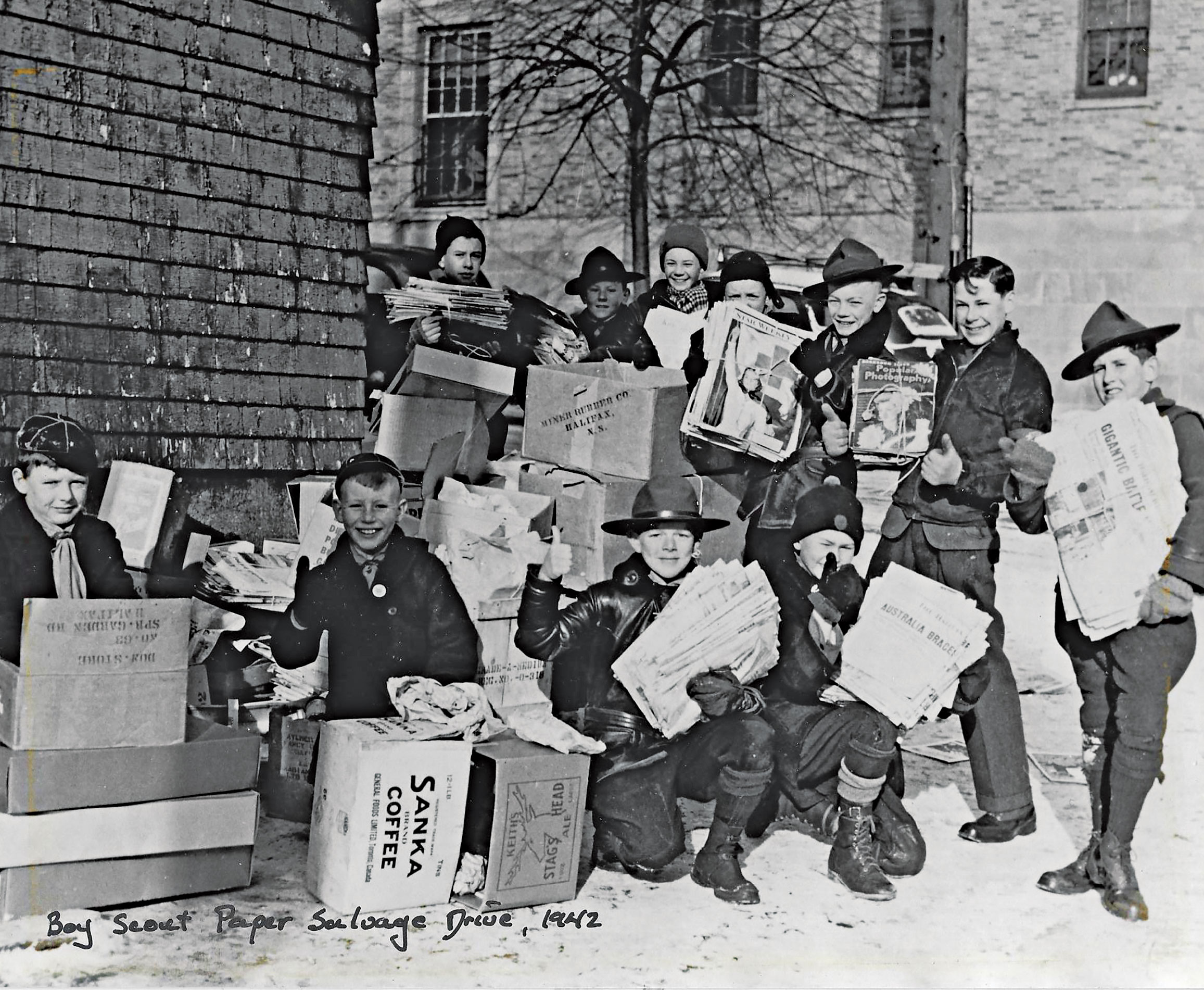 A group of Scouts in Halifax collect paper and cardboard to be recycled for military purposes during the Second World War.
Scouts Canada National Museum, Ottawa

The contribution of Canada’s Boy Scouts and Girl Guides was summed up in a 1942 editorial in the Halifax Star, “There is no single organization in Canada today that has given more freely of its time and talents than the Boy Scouts. They have been ever ready to help any good cause.”

Numerous letters thanking members of the Boy Scout and Girl Guide movements for their wartime service have been collected.

A letter from Britain says, “The crates of surprises came at a time when clothes given by friends simply could not be mended any more (as I well know, being the night staff nurse, who has to do the mending). It is such a treat to find whole garments in the cupboard now. To all the Girl Guides in Canada, we send a very grateful and hearty thank you!”

On Jan. 1, 1942, a letter purportedly written by two seven-month-old babies in a small hospital in Britain said, “Dear Girl Guides, Kenneth and I feel we must write and thank you very, very much for the perfectly lovely parcels of clothes you so kindly sent from Canada. We appreciate your kindness and beautiful work and kind thoughts you put in them more than we can say. From Christopher and Kenneth.”

In 1941, a farmer in Morden, Sask., wrote, “Twenty boys just solved my threshing problem.” The boys who helped him belonged to the 1st Morden Scout Troop.

In 1942, the Chief Executive Boy Scout Commissioner received a letter from the general chairman of the National War Finance Committee, Graham F. Towers, who wrote, “I wish to take this opportunity to express my appreciation, as well as that of each provincial chairman, for the help which the Boy Scouts have been to the National War Finance Committee in previous loans. They have rendered real service in making the Victory Loan campaign a success.”

Some wartime service badges earned by Scouts as well as other artifacts showing their wartime contributions can be seen at the Scouts Canada National Museum, along with thousands of other scouting items. It is located in the Scouts Canada national headquarters in the west end of Ottawa, easily identified by the tall totem pole outside its front entrance.

Staffed by adult scouting volunteers, it is filled with interesting historical artifacts. The museum is open to the public on Monday, Tuesday and Thursday. Guided tours can be arranged by e-mailing [email protected] or phoning 613-224-5131, extension 280 or toll-free 1-888-855-3336.

The Girl Guides do not have a museum but do have archives. The Girl Guides of Canada-Guides du Canada, Ontario Council Archives collects and preserves records and artifacts documenting the history of guiding in Canada. Located in Toronto, its materials include minutes, annual reports, photographs, scrapbooks and unit records. The archives offer a variety of research services for the general public.

There is also a Girl Guides of Canada exhibit on the second floor of Toronto’s historic Casa Loma. The Edwardian-style castle, north of downtown Toronto, has had a relationship with the Guides since 1912 when Lady Mary Pellatt, who lived in the 93-room castle with her husband Sir Henry Pellatt, became the first Girl Guide Chief Commissioner. Right from the beginning, Lady Pellatt hosted events for Guides at their home and, under its current owner, the tradition continues today. The exhibit, which opened in 1973, focuses mainly on uniforms and the connection between guiding and Lady Pellatt. Casa Loma is open to the public daily. For more information, e-mail [email protected]