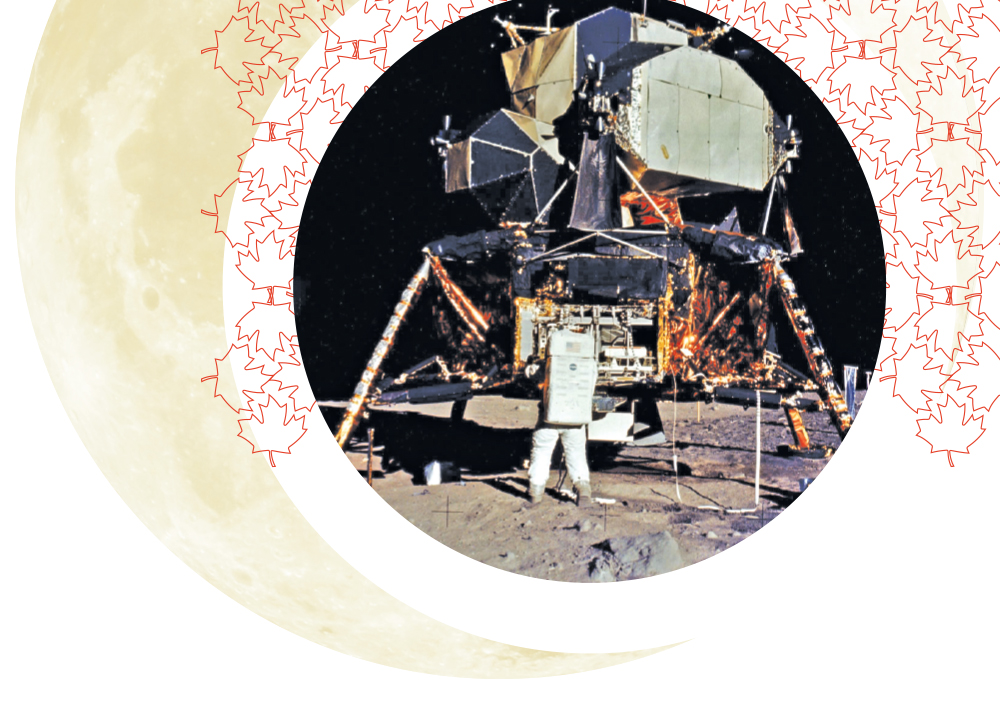 What was the first thing to touch the moon’s surface on July 20, 1969? Before Neil Armstrong stepped onto the lunar surface with the words, “That’s one small step for [a] man, one giant leap for mankind,” the Canadian-made legs of the lunar landing module settled into the dust of the moon.

The legs were made of lightweight honeycomb compressible aluminum, manufactured by Quebec’s Heroux-DEVTEK. The module itself was primarily designed by Sarnia-born Owen Maynard, an engineer and former Second World War RCAF pilot. He had previously been one of the engineers on the supersonic Avro Arrow. When Prime Minister John Diefenbaker cancelled the Arrow program in 1959, Robert Gilruth, who was with the American space program, flew to Toronto the next day and hired 25 men to join his team in Virginia. Seven more joined shortly thereafter.

The Canadian engineers were initially part of NASA’s Space Task Group, which soon embarked on the Apollo space program. In 1961, President John F. Kennedy announced to the world that America would put a man on the moon before the end of the decade. The pressure was on.

One of the first challenges was that they didn’t know how to do it. Several methods were proposed, including what was called lunar orbit rendezvous, which Maynard said was the most viable, and which was eventually adopted. He became the chief of systems engineering for the Apollo program, which meant he had to ensure that all the complex parts worked together seamlessly. He also did the initial sketches of what would become Eagle, the lunar landing module.

The work was relentless and stressful. In 1967, three Apollo 1 astronauts were killed in a cabin fire during a launch rehearsal test. Maynard was exhausted and discouraged, and told his boss at NASA that he’d stay for two more lunar landing attempts and that would be it.

When images from the dramatic Apollo 11 landing were beamed back to Earth half a century ago, the whole world watched. With the exception of Maynard. He slept through the first part, then got up and walked by the television in his Houston home in his bathrobe. He glanced at the screen briefly then went and made himself breakfast.

The Canadians who worked on the Apollo program didn’t get the recognition they deserved. The first reason for this was that the Apollo mission was a critical part of the Cold War; America would put a man on the moon before Russia, proving its superiority. They didn’t want that picture muddied by brilliant Canadian engineers.

The other reason was a familiar national trait. “I think that Canadians are very low-key about their accomplishments,” said Robert Godwin, a former curator of the Canadian Air & Space Museum (recently renamed Canadian Air and Space Conservancy). “They shouldn’t be, because Canadians have done things that people in the rest of the world have never done.”