CBC covers the Battle of Carpiquet 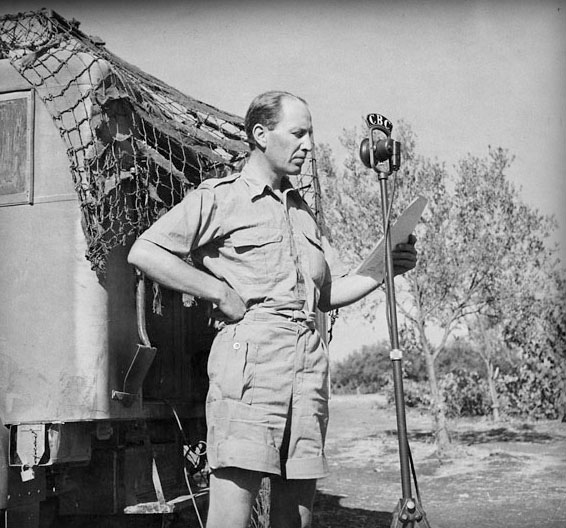 Matthew Halton prepares to broadcast in Sicily, Italy in August 1943.
LAC – 3612982
War correspondent Matthew Halton covered the Second World War for the CBC. Here is an extract from a recording of what he saw and heard during the Canadian attack on Carpiquet village and airfield July 4, 1944.

“This is Matthew Halton of the CBC speaking from France.

“It’s two minutes to five in Normandy and the sun hasn’t risen yet over us or over the Germans 800 yards away. It will rise on a fearful scene because at 5 o’clock precisely the Canadians are going to attack. And they’ll attack with the most enormous concentration of fire ever put down on a small objective….

“I’m in a stone barn with a company of western Canadian machine gunners who are going to be in battle soon, drawing fire to aid the main attack…not half a mile away is the powerful German strong point of Carpiquet village and Carpiquet airdrome, two to three miles west of Caen. That position has been a thorn in our side. We can’t get Caen until we get Carpiquet and now we’re going to get it….

“I’ve never had a better observation post for a battle and I dread what I’ll see through this door. Many hundreds of guns will support the assault. No less than hundreds of field guns, 25 pounders. No less than hundreds of medium guns and many heavy guns and in addition the 16-inch guns of a British battleship…which will throw their 2,000-pound shells from 10 or 12 miles away at sea, and…many squadrons of fighter bombers and rocket-firing Typhoons. This unimaginable barrage will move, followed by our troops and tanks. I wonder if the Germans over there can guess what hell is about to break on their heads at 5 o’clock.

“Within a few minutes after the barrage started, the objective below us and the fields were a dense cloud of smoke and cordite fumes…and above all, the incessant, earth shaking and atrocious pounding of the hundreds of guns….

“I stand here…[and] all we can see is smoke and the terrible burst of flame as one of the huge naval shells falls on the enemy position. Occasionally an enemy shell falls near us…. As I speak, you can hear the hard stuttering of the machine guns. I can see tracer bullets from our machine guns going across our front now. I can hear other machine guns father away, as if from our troops who are advancing [and] with them the black waddling tanks belching flame and high explosive shells, and the men shooting their Sten guns from the hip as they came and thousands of flaming red tracer bullets skimming the ground at what seemed a thousand miles a minute.”