James Strachan: Old enough to die; too young to drink 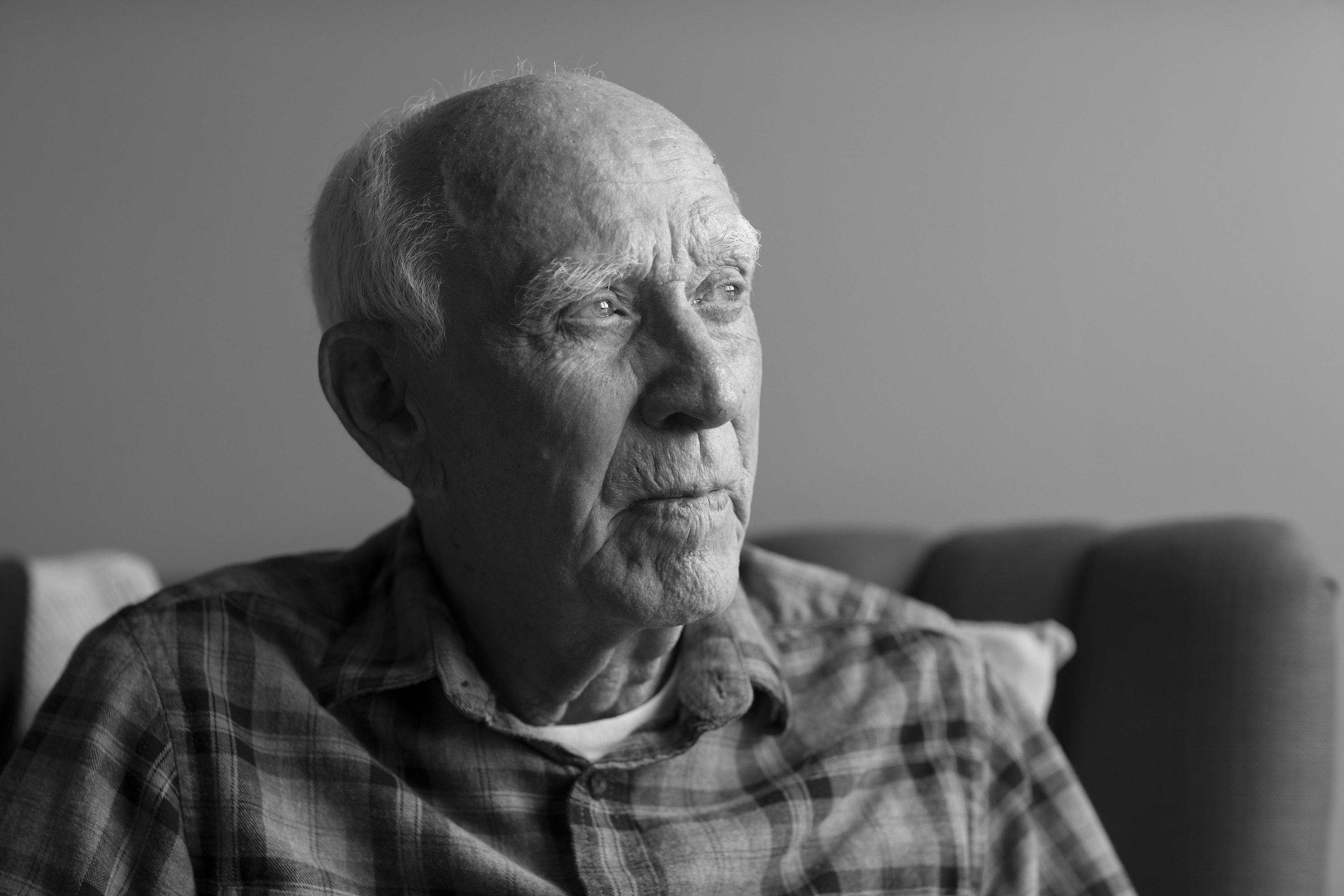 James Strachan, 93, was a signaller aboard a D-Day assault craft. He landed troops in all three sectors of the Normandy invasion zone.
Stephen J. Thorne
The grim cost of the D-Day invasion still haunts James Strachan, 75 years after he delivered troops to the beaches of Normandy.

Strachan was a signaller aboard a Landing Craft, Infantry (Large), manning the Oerlikon gun as his assault vessel shuttled back and forth across the rolling English Channel, ferrying seasick soldiers in and dead and wounded out during history’s greatest seaborne invasion.

A native of Selkirk, Scotland, Strachan came to Canada at age five. After joining the Royal Canadian Navy at 17, he sailed in a corvette, landing in England then training in combined services operations along the sea-swept shores of his homeland.

During the invasion, he landed troops along three Allied sectors of the French coast—Juno Beach in the Canadian sector, Sword Beach in the British sector, and Utah Beach in the American sector.

Now approaching his 94th birthday, the farmer’s son grew up in New Jerusalem, N.B., before the village was appropriated to create Canadian Forces Base Gagetown. He reflects on his war years in vivid detail, describing enemy machine-gun fire as they approached the beaches, the blood of dead and dying troops filling the bottom of their barge-like landing craft, and the sobering aftermath of the fight to gain a foothold in German-occupied Europe.

“When you’re coming in on the second and third day,” Strachan said as he leafed through the D-Day issue of Legion Magazine (May/June 2019), “the dead start coming to the surface and the seagulls are out there hanging on, picking their eyes and their lips out for dinner.

“They don’t show that in any of these pictures.”

Strachan was just a young teenager when he went to work nights as a riveter building bombers at the Fairchild aircraft factory in Montreal. He and two other boys from Fredericton quit and joined the navy after they were denied jobs on the day shift. He was 17.

“As long as you were warm, they’d take you,” he said. “They didn’t take cold ones. No, they didn’t care how old you were.”

He trained in Montreal and Halifax before he was assigned to corvette duty aboard HMCS Kamloops.

He made one convoy run across the rugged North Atlantic in the dead of winter, January through February 1942. They assembled in Bedford Basin in Halifax. Ships joined them from Boston, and more awaited them in St. John’s, where they refuelled before setting out for England.

Strachan figures Kamloops sailed twice the transatlantic distance patrolling up and down and through the rows of ships delivering troops and supplies for the war effort. A convoy could only move at the speed of the slowest ship, and Strachan’s averaged between eight and 10 knots, or about nine to 11 miles an hour.

“Cold. Cold. And cold,” he said. “I’ve still got my old duffel coat somewhere—and not a Canadian one, either. They tried to take it away from me when I was discharged, but I had a Royal Navy one in the end.”

“Up spirits” was the daily tot of rum issued the crew, but Strachan was too young to take it.

“The bosun went around with a whistle and piped before dinner. And then he’d say: ‘Up spirits. Stand fast the Holy Ghost. Afternoon watchmen to dinner.’

Sailors saved him “sippers,” a smidgeon at the bottom of their glass.

He volunteered for combined services training with the army and air force, manning an assault craft off the coast of Inveraray, Scotland, and elsewhere as soldiers boarded from scramble nets hanging off the sides of ships.

They would run them into shore, usually before daylight. It was training for what they would later learn was to be the invasion of Europe.

“Every now and again, they’d make us go ashore with the army fellas and take the same training as they did because if we got hit and stranded there, we had to know how to protect ourselves.”

The training would later prove invaluable on one of the D-Day beaches after Strachan’s assault craft was hung up high and dry in a receding tide, forcing the crew to wait it out until the next high tide lifted them off the sandy shore. 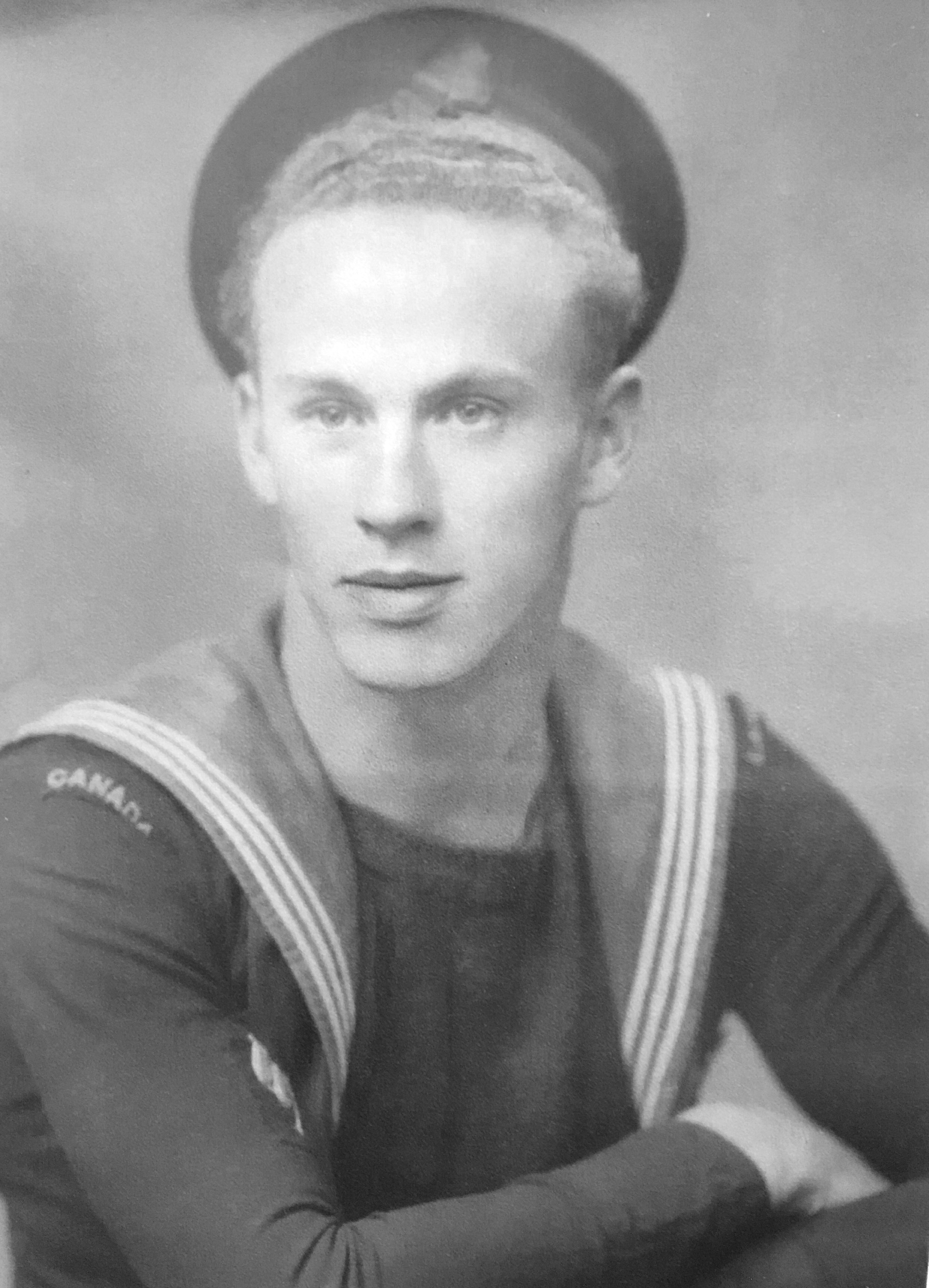 Strachan in about 1942. He would have been 17 years old.
COURTESY JAMES STRACHAN
They first assembled at Southampton, England, in the days before Operation Overlord was to begin, donning full uniforms, lining the decks and saluting as King George VI ripped through the fleet standing amidships in a fast boat – a “wiz” boat Strachan called it.

They moved to Portsmouth, where thousands of vessels were preparing to sail.

He made his first crossing late on June 6. The English Channel was what Strachan described as an “oily” sea—rolling, foam-free waters, not breaking, the worst kind for seasickness. Soldiers were vomiting everywhere.

“Poor buggers,” Strachan lamented. “They should’ve had them on boats for a month before we went, taking them back and forth somewhere.

“As soon as we hit the swell out of the harbour, they were throwing up.”

The Canadians were outfitted with folding Birmingham Small Arms bicycles, a signature element in photos of their landing. But Strachan said many soldiers were confounded by the whole concept of peddling a bicycle into battle, and threw them overboard during the crossing.

By the time he reached the shore, Juno was littered with bodies and equipment. Several assault craft were lying burned and broken on the beach.

They took machine-gun fire from a large brick house. Strachan manned the Oerlikon. “The second time we went in, they were still firing at us. I got a few shots in.”

Finally, a soldier on the beach took a tractor and bulldozed the building to the ground. “When the Germans came out, the guys shot them.”

He soon learned that their Canadian boat was not limited to the Canadian beaches. “You went wherever they wanted you.”

He said the Americans were heavily laden and fought in groups or squads, hampering their fighting ability and creating bigger targets for the well-prepared German gunners. The British, on the other hand, moved independently, carrying a can of bully beef for five men, some hard tack and 10 rounds of ammunition apiece, with resupply right behind.

As they approached Utah, Strachan said, they could smell the disinfectant the Germans sprayed on their uniforms, a “sharp chemical smell.”

At one point, one of the sailors picked up a paratrooper’s high boot off the beach—well back of the intended drop zone several kilometres inland. The sailor found the other one a few metres away, only to discover the airborne soldier’s foot still inside.

The crew of the assault craft made the most of their crossings, taking on dead and wounded and ferrying them back to Portsmouth before a hospital ship arrived offshore around June 10.

“The ones that were still alive, they’d just taken the compress pack off their helmet and stuck it on the wound. Most of them didn’t survive. A lot of them died on the way back.” 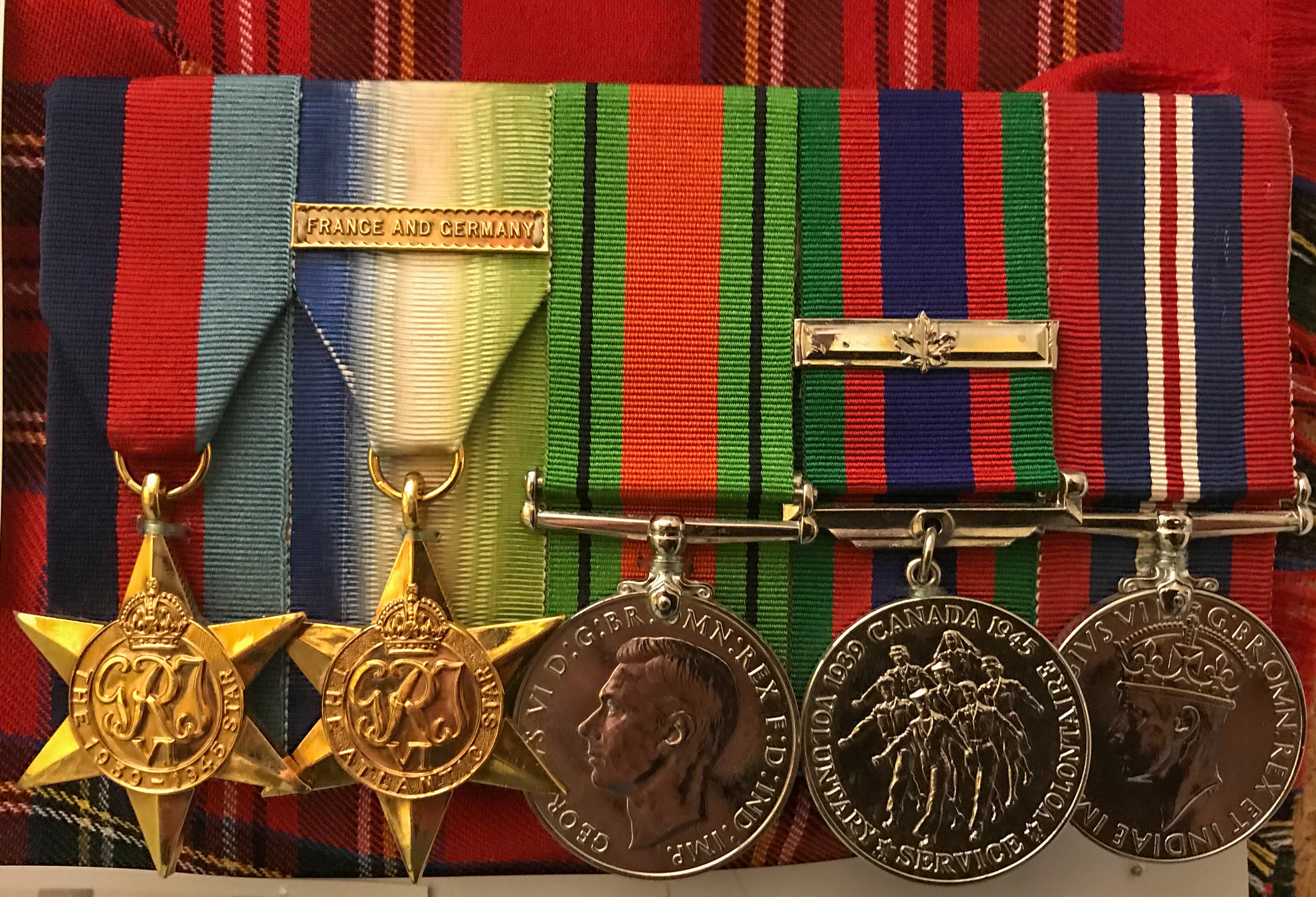 James Strachan’s Second World War medals, including The Atlantic Star (second from left) with a France and Germany bar. His service medal includes a bar indicating he was a volunteer.
COURTESY JAMES STRACHAN
Soldiers would meet them back in England, taking the men they could help and leaving the ones they could not. Strachan said the bulk of the casualties were just youngsters.

“We had to take the rest of them off,” Strachan said. “The old skipper ordered ‘splice the main brace’ (have a drink) before we went back again.

“You had to clean up the blood all over everything too. New troops coming on didn’t want to step in a puddle of blood in the deck. So we hosed’er down.” He pauses and shakes his head. “A big price for a bunch of kids, wasn’t it?”

The sounds of battle faded to a muted rumble as the war moved inland over the succeeding days. Starving French civilians emerged from hiding to beg for food rations.

Strachan returned to Canada in the winter of 1945. He worked on a farm for four years before attending forest rangers’ school. He worked in British Columbia and Ontario as a forester before coming back to New Brunswick’s Miramichi region, where he worked for pulp-and-paper companies over the next 30 years.

He married twice, had three children, and became something of a student of Second World War history. He said if Adolf Hitler had not been so stubborn in maintaining an Eastern Front in Russia, D-Day would have been “a close call.”

“He had a lot better-trained men and better equipment. They would have been a hard bunch to beat.”

One of the most lasting impressions the great-grandfather 10 times over carries with him to this day is the magnitude of the D-Day operation and how small a part of it individuals were.

“You’re expendable, everything—you, boat, equipment—everything. They figured out the percentage of people they were going to lose every time they did anything, even in training.

“I can remember going back to the accommodation vessel taking dead people back. They’d got hit with live fire in training, and that was allowed for as part of the percentage.

“They don’t print that, either.” 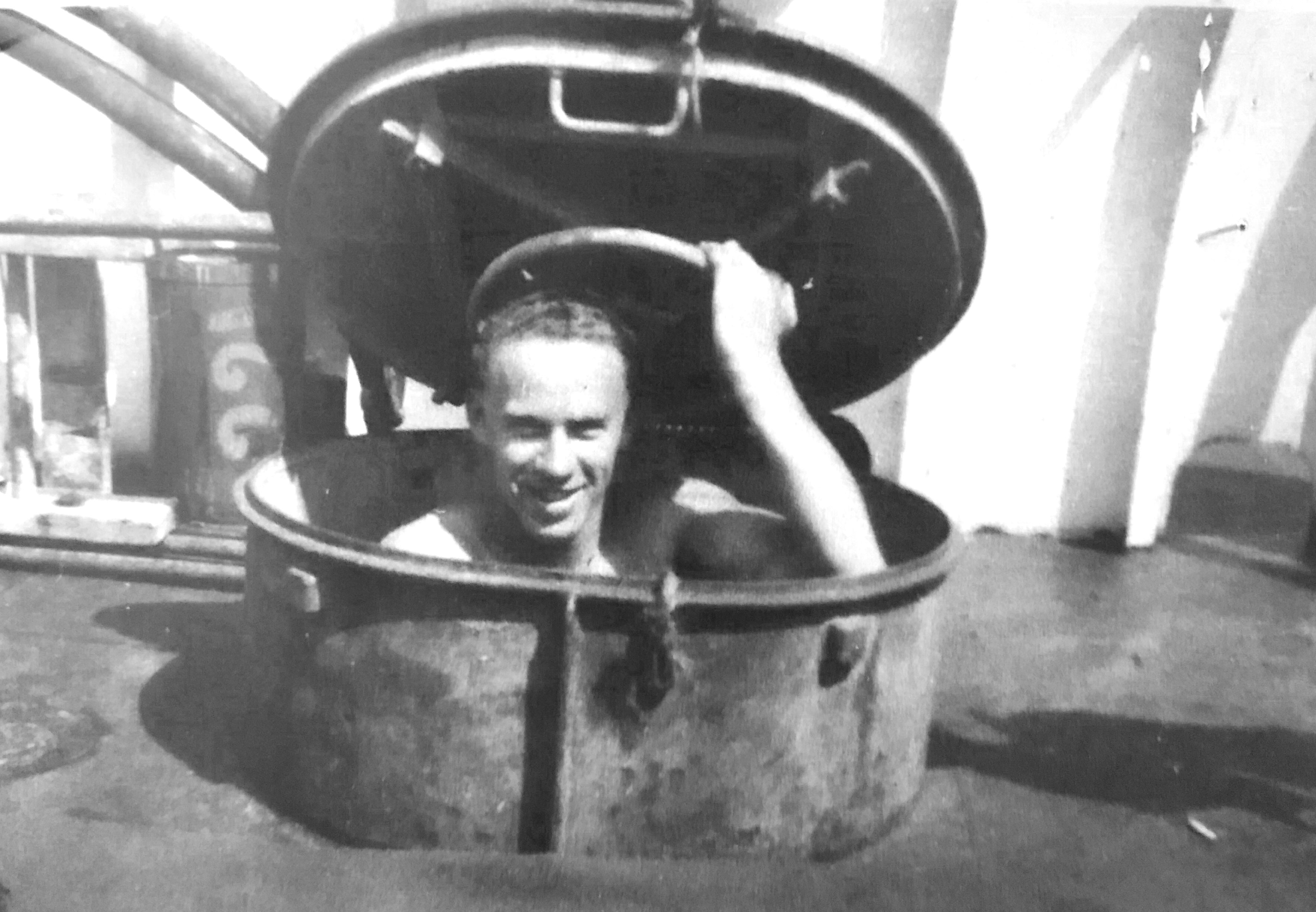 Strachan emerges from a hatchway aboard ship sometime before the D-Day invasion.
COURTESY JAMES STRACHAN
—

This is the second of three Front Lines columns on D-Day.