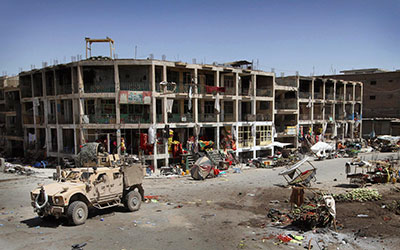 Building 4 after the 7 May 2011 action.
AP 02905364/Allauddin Khan
For weeks in April 2011, Kandahar in Afghanistan had endured an increasing number of Taliban attacks. On May 7, the city of a million descended into chaos.

Somewhere between 60 and 100 insurgents and 20 suicide bombers attacked multiple targets, including the governor’s compound, Afghan army headquarters, three police stations, the mayor’s office, two high schools and an Afghanistan intelligence agency office. Insurgents had taken over a three-storey shopping centre and were shooting down into the governor’s compound.

The Afghan National Police sent in their special response team, and soon help was asked of Canadian Special Operations Task Force 58 and the embedded partnering team at forward operating base Graceland, commanded by Captain David Suffoletta.

One of the team’s first objectives was clearing the massive shopping centre, a job that took about 12 hours.

The combined force moved through the lower floors fairly quickly, finding some civilians and taking into custody wounded young men who might be terrorists. But insurgents, who had carefully barricaded themselves in shops on the top floor, had a clear range of fire and took every advantage of it.

It took half a dozen attempts under heavy fire to clear the building.

Eventually, hot ammunition set alight flammable goods in shops surrounding the insurgents, providing cover for the joint force to fire into the terrorists’ lair, and coincidentally setting off their stockpiled ammunition.

The fire was out and the building secure at about 6 a.m.

But names of two recipients of the Star of Military Valour were declassified in 2017.

Suffoletta was one if them. His citation reads, “Under intense fire and at great personal risk, he led his team through a close-quarter clearance operation of a multi-storeyed building, valiantly coordinating multiple assaults that successfully neutralized the insurgent threat.”

He repeatedly exposed himself to enemy fire to provide cover for his men. “He provided me with the white light needed to place the munitions in the correct room thereby seriously divulging his position to the insurgents,” recalled one colleague quoted in an article by Colonel Bernd Horn on the Canadian Military Journal website.

Sergeant Sébastien Courville “demonstrated exceptional courage and dedication while mentoring an assault element…during a spectacular and prolonged attack,” reads his citation for the Star of Military Valour.

Courville “never hesitated to lead the assault against insurgents and exposed himself to close range fire each time,” said Suffoletta, quoted in the article. “He showed incredible skill in his ability to motivate his wavering Afghan force for each assault.”