It is a big step to take another human life.
It is not to be done lightly.
I know of men who have taken life needlessly in other conflicts.
I can assure you they live with the mark of Cain upon them.
—Lieutenant-Colonel Tim Collins, Royal Irish Regiment 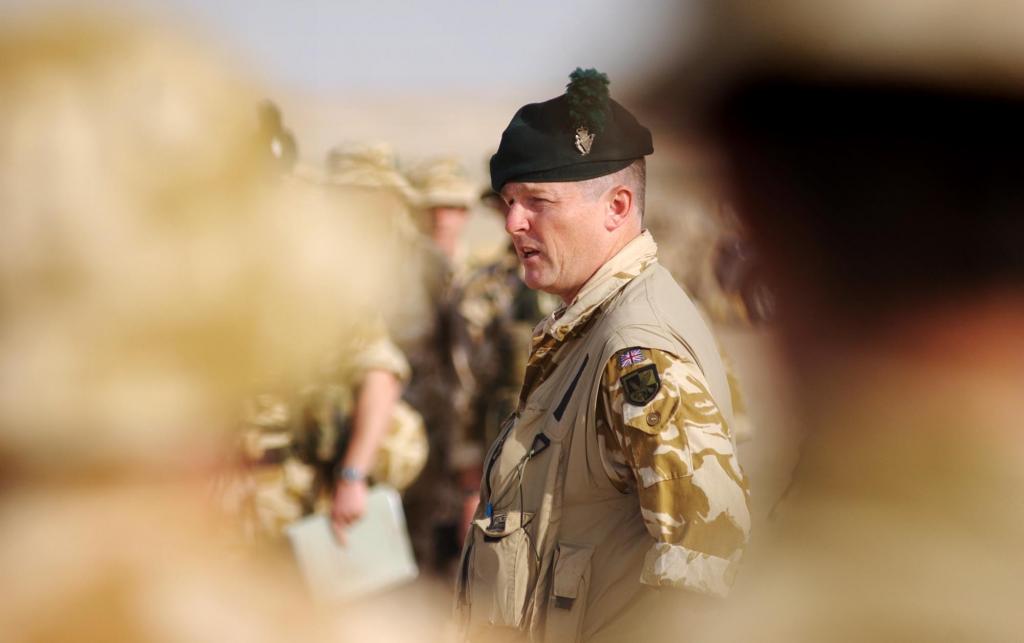 Lieutenant-Colonel Tim Collins addresses the Royal Irish Regiment. His speech in March 2003 has been described as one of history’s greatest military speeches.
ROYAL IRISH REGIMENT
It was the eve of the invasion of Iraq—March 19, 2003—and Lieutenant-Colonel Tim Collins was speaking to his troops of the 1st Battalion, Royal Irish Regiment, at their staging point in Kuwait.

Born in Belfast and a graduate of the Royal Military Academy Sandhurst, Collins delivered one of history’s most poignant and elegant battle speeches, all of it off the top of his head.

It has been compared to the Agincourt address in which Shakespeare’s Henry V urges his legions “once more unto the breach, dear friends, once more.”

That Collins’ words survived at all is thanks to the shorthand of a single journalist, Sarah Oliver of The London Daily Mail on Sunday. There is no recording or film of his address.

“We go to liberate, not to conquer,” Collins told his 1,000 soldiers, his Irish accent, as Oliver would later describe, “rhythmic, lyrical, like someone who had the right to make you behave, maybe your dad.”

“We will not fly our flags in their country,” the commander said. “We are entering Iraq to free a people and the only flag which will be flown in that ancient land is their own. Show respect for them.”

Within hours, the soldiers of the Royal Irish would set out into the unknown to fight a war of unpredictable proportions and unforeseen consequences.

“I expect you to rock their world,” Collins told them. “Wipe them out if that is what they choose. But if you are ferocious in battle, remember to be magnanimous in victory. Iraq is steeped in history. It is the site of the Garden of Eden, of the Great Flood and the birthplace of Abraham. Tread lightly there.”

His audience was “loyal and respectful,” Oliver recalled in a column written five years later, “but also quite familiar. Tim’s leadership was so unquestioned that he did not need the buttons and badges of his rank to command it.” 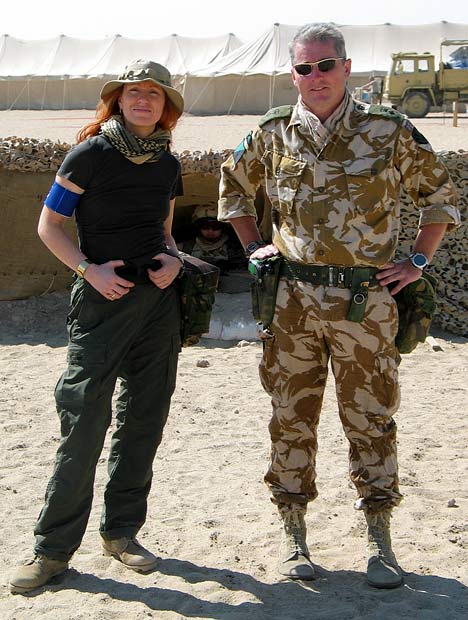 In describing a Kenneth Branaugh re-enactment of the speech performed for the BBC2 television series “Ten Days to War,” Oliver called the actor’s rendition more reflective than the original and said “the poetry does not soar as it did in the desert and it’s a lot less bossy.”

“But then,” she added, “if he had been as theatrical as Tim he would have been nailed for overacting.”

The colonel, she said, was naturally always at full volume. Especially, one would assume, when speaking to 1,000 soldiers without the aid of a microphone.

“You will see things that no man could pay to see,” declared Collins. “And you will have to go a long way to find a more decent, generous and upright people than the Iraqis. You will be embarrassed by their hospitality even though they have nothing.

“Don’t treat them as refugees, for they are in their own country.

“Their children will be poor, in years to come they will know that the light of liberation in their lives was brought by you.”

While Collins was sentimental about his family, explained Oliver, “he was clinical when it came to fighting and perhaps dying.”

In his unprepared speech, Collins addressed the issue of death head-on.

“If there are casualties of war, then remember that when they woke up and got dressed in the morning they did not plan to die this day,” he said. “Allow them dignity in death. Bury them properly and mark their graves. 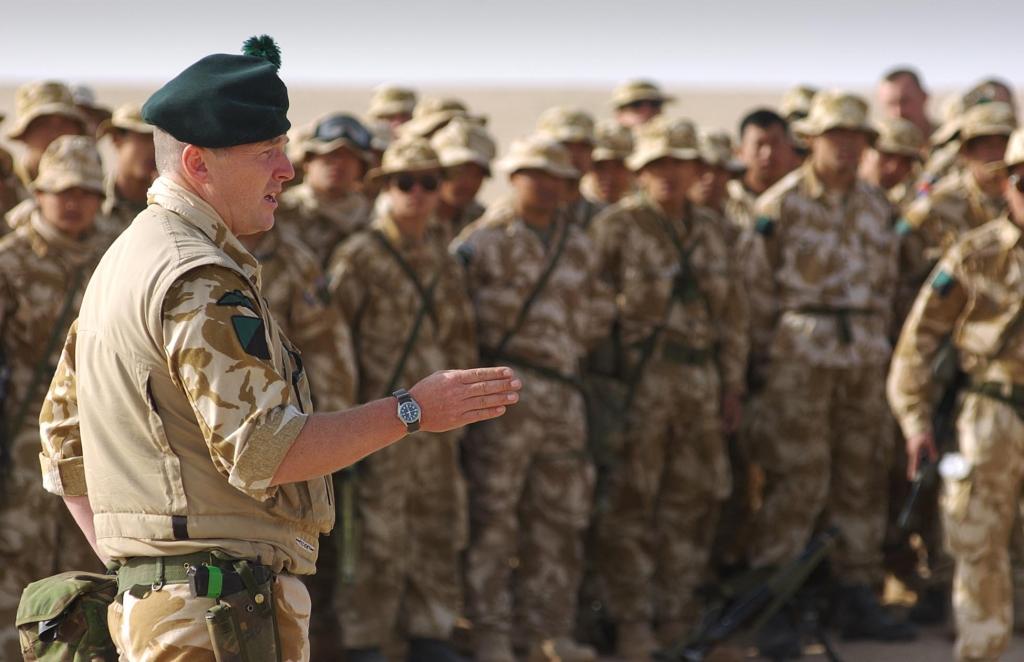 Collins addresses the Royal Irish Regiment on March 19, 2003.
ROYAL IRISH REGIMENT
“It is my foremost intention to bring every single one of you out alive. But there may be people among us who will not see the end of this campaign. We will put them in their sleeping bags and send them back. There will be no time for sorrow.”

As for the enemy, he said many regional commanders with “stains on their souls” were stoking the fires of hell for their leader, Saddam Hussein. The Iraqi president would eventually be captured, tried and hanged by his fellow Iraqis.

“He and his forces will be destroyed by this coalition for what they have done,” promised Collins. “As they die, they will know their deeds have brought them to this place. Show them no pity.

“The ones who wish to fight, well, we aim to please.”

But he reminded his troops to show mercy to those who surrender and not exceed the limits of good conduct in war.

“If you harm the regiment or its history by over-enthusiasm in killing or in cowardice, know it is your family who will suffer. You will be shunned unless your conduct is of the highest—for your deeds will follow you down through history.

“We will bring shame on neither our uniform or our nation.

“Let’s bring everyone home and leave Iraq a better place for us having been there.

“Our business now is north.”

Oliver described actor Kenneth Branaugh’s re-enactment of the speech for the BBC2 television series “Ten Days to War” as more reflective than the original. “The poetry does not soar as it did in the desert and it’s a lot less bossy,” she said.

Canada did not formally participate in the Iraq War. Prime Minister Jean Chretien opted out—wisely, it turned out—citing the lack of a United Nations sanction. Kofi Annan, secretary general at the time, declared the invasion illegal, a breach of the UN charter. About 100 Canadian officers, on exchange to American units, were involved.

Coalition troops and subsequent investigations by international teams of experts could find no evidence of the weapons of mass destruction that then-president George W. Bush claimed as the war’s primary justification.

Hussein’s brutality, however, was well documented. He had his reasons. Without him, Iraq broke down into continuing sectarian violence and became a breeding ground for ISIS and other extremists.

“Almost five years later, the words of Colonel Tim’s speech are still resonant,” Oliver wrote in 2008. “I think I know why. His historic and humanitarian idealism stood in bold contrast to months of political chicanery in Downing Street and Washington.

“Those tentatively supporting the war suddenly had their poster boy, while those against it were reminded that the men and women charged with fighting Saddam’s forces were not responsible for the geopolitics that had put them there.”

Collins’ 1st battalion moved out the next morning and crossed into Iraq on March 22, 2003. The regimental website reports that his troops assumed responsibility for securing production facilities in the Rumaila oilfields.

They also conducted counter-insurgency and humanitarian-assistance operations in the area, eventually expanding their zone of responsibility to more than 2,000 square kilometres—from the Kuwait border to the Hammer Canal.

Collins himself would later admit in a London Telegraph column that “the raison d’être of this war was at best vague.”

As for his speech, he said he never wrote it down or memorized it from a script written by another hand, but must have composed it, instead, “subconsciously.”

“I guess it was the things that I had encountered that inspired lines of my talk,” he said. “The bravado and fierce oaths of those who were in reality terrified—in my experience, the most likely to shoot when there was no need—led to: ‘It is a big step to take another human’s life….’

“The dismissive glee of some racist whom I overheard declaring that he couldn’t wait to get among the backward Iraqis must have inspired this: ‘Iraq is steeped in history….’ A senior officer, who had never before been to war and declared it would be just like a big live-firing exercise, may have sparked: ‘…there may be those of us who will not see the end of this campaign.’”

The Royal Irish eventually resumed their push north, occupying the town of Al-Midaina and securing crossings over the Euphrates River. Their advance took them to Al-Qurnah —the fabled Garden of Eden—before continuing their push to Amarah, where they patrolled extensively.

Collins would bring them all home, returning to Canterbury, England, in mid-May. The battalion received a unit citation for its work. Collins was appointed an Officer of the Order of the British Empire for distinguished service. He retired a full colonel the following year.

“After I had spoken, I was standing outside my tent smoking a Montecristo,” he recalled. “Colour Sergeant Chris McDonald—cheery as ever—happened past. ‘Great talk, boss,’ he said in his distinctive Newry accent, ‘I’m proud to be here.’

“‘Thanks, Colour Sergeant,’ I replied. I still think of Chris at that moment, whenever the war is mentioned. We buried him almost exactly a year later back in County Down. He and a Canadian colleague had laid down their lives to save others in Iraq in 2004, long after we had gone home. Now Chris is among a small but growing band of young faces that live in that part of my memory.”

McDonald was on his final leave before ending his military career when he and Canadian Andrew Bradsell, 34, were killed in an ambush in Mosul. The two were working for a private security firm at the time.