The sinking of HMCS Esquimalt

HMCS Esquimalt, the last Canadian warship lost to enemy action in the Second World War, went down within sight of Halifax. Although 43 of the 71 crew survived the sinking, 16 died after spending six hours in the frigid waters.

That spring, the days of cocky submarine wolf pack attacks were long past. Germany had lost the use of ports in France and many of its supply tankers had been destroyed by the Allies. But the U-boat captains fought on.

On only his second cruise in command, Captain Hans-Edwin Reith sailed U-190 from Norway for the coast of Nova Scotia, where sonar conditions were poor and the hunting good; a sister U-boat that had recently dispatched HMCS Clayquot escaped undetected. 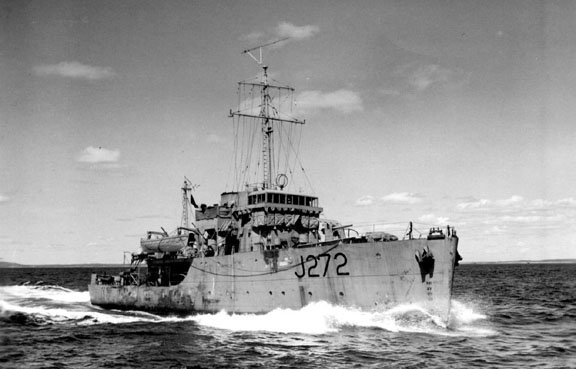 HMCS Esquimalt in happier times. Torpedoed and sunk by U-190 on 16 April 1945.
Department of National Defence
U-190 evaded detection by travelling submerged, and went unheard by ASDIC aboard Esquimalt, which made a regular radio report to the war signals station in Halifax at 6:27 a.m. Contrary to orders, Esquimalt was not zigzagging course, nor had deployed Canadian Anti-acoustic Torpedo (CAT) gear. It was just three weeks before war’s end.

At about 6:30 a.m., on April 16, 1945, an acoustic torpedo fired from U-190 hit Esquimalt’s stern and knocked out power, so no distress signal was sent. The ship sank in less than four minutes, the stunned crew unable to loose the lifeboat or fire a flare.

Twenty-eight crew went down when the minesweeper sank; 43 survivors scrambled for four Carley floats, but there was not room enough for all; some were forced into the frigid waters, clinging to the sides of the floats.

They could see the lights of Halifax. Ten minutes later, a plane flew overhead, but mistook the floats for fishing boats.

At 7:41, the Halifax station could not raise the ship, but that was not reported when the watch changed. Esquimalt missed a rendezvous with HMCS Sarnia at 8 o’clock. The signals station ashore thought there was nothing amiss when it was unable to make contact at 9:01. Two minesweepers passed by at about 9:30, but did not see the survivors. Sarnia reported the missed meeting and lack of contact at 9:50.

At 10:02, Sarnia’s ASDIC pinged and suspecting Esquimalt had been torpedoed, the ship dropped two depth charges, which were heard aboard U-190, a safe distance away. At 11:25, Sarnia abandoned the sub hunt and began searching for Esquimalt. 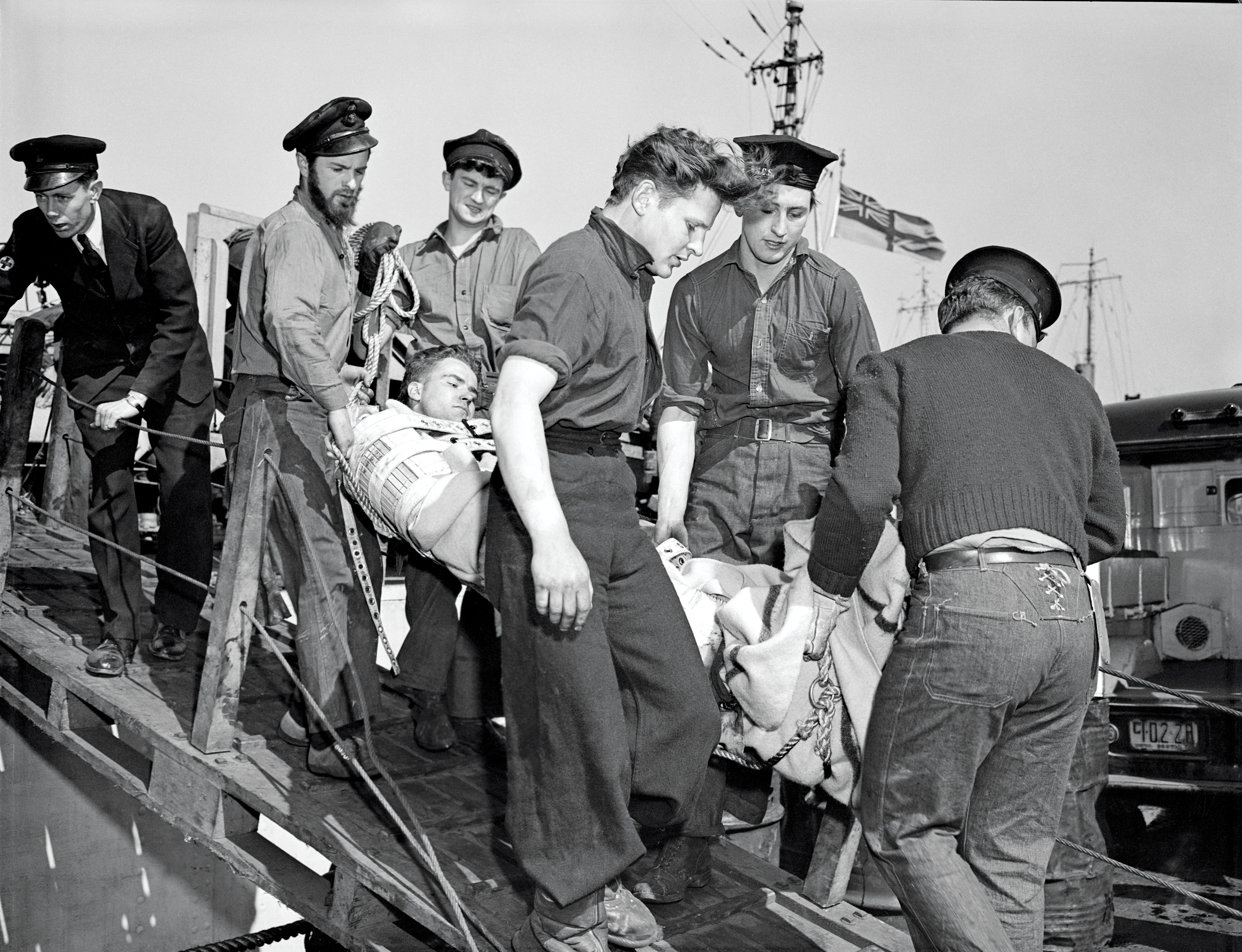 Survivors of the minesweeper HMCS Esquimalt.
LIBRARY AND ARCHIVES CANADA PA-157033
The six survivors in one Carley float, which had started out with 13 men, paddled their raft toward a passing ship, waving a white shirt. The ship and Sarnia noticed them at 12:30 p.m., and rescued those who had survived the cold.

Meanwhile, the hunt for the U-boat began in earnest. Four minesweepers, four frigates and smaller vessels were scrambled, but did not locate U-190, which lay 24 metres down on the sea bottom near shore for seven days, benefiting from the poor sonar conditions. A search farther afield including U.S. ships found no trace of U-190. The hunt was called off April 21.

U-190 headed for home, but received the command to surrender on May 11. The submarine was commissioned into the Canadian Navy and served for two years before being sunk near the position where Esquimalt went down. Its periscope went to the Crow’s Nest Officers’ Club in St. John’s.

Joe Wilson, Esquimalt’s last surviving crew member, who went on to serve the navy for 25 years, died in January 2012.