The golden days of peacekeeping have not returned 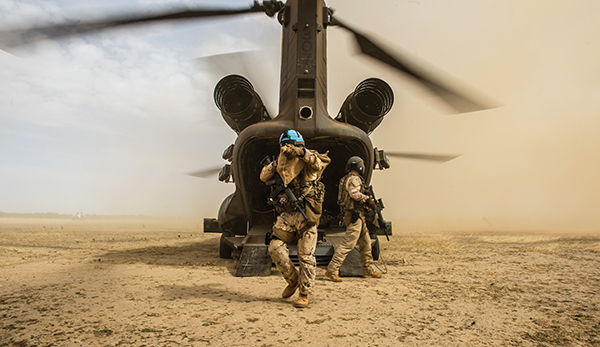 A UN soldier from Canada disembarks a CH-147 Chinook helicopter to deliver vehicle parts to our MINUSMA partners on the ground in eastern Mali on October 29, 2018 during Operation PRESENCE-Mali.
Corporal Ken Beliwicz TM01-2018-0121-20

The Canadian contribution to the United Nations Multidimensional Integrated Stabilization Mission in Mali (MINUSMA) officially began on Aug. 1, 2018. The mission consists of three Chinook helicopters equipped for medical evacuation as well as transport missions, five Griffon helicopters to fly escort for the bigger Chinooks and about 250 personnel to fly missions, provide ground support, and generally to guard the helicopters between missions.

Last fall, Ottawa announced that there would be no extension to the mission, which is scheduled to end in July. Thus, Canada will have completed its first UN peacekeeping mission of any substance for a long time.

Those missions were much larger, more substantial and of greater consequence than today’s mission to Mali, but they took place when the world was a different place and when the Canadian Armed Forces was larger and could deploy more assets to UN missions.

The UN mission in Mali consists of some 56 partner countries and about 15,000 troops trying to maintain stability in what is essentially a three-way war, with the government fighting Tuareg rebels in Mali’s sparsely populated north and a variety of jihadis throughout the country. The UN mission is aimed at providing protection to civilians; it is a dangerous operation, with more than 170 UN troops killed in ambushes and by improvised explosive devices (IEDs) since the UN presence there began in 2013.

There is no sign that any political progress has been made toward a diplomatic solution to the Mali war, which was indirectly made worse by the fall of Moammar Gadhafi in Libya and the flood of weapons out of that country after he was killed. But no matter, Canada will pull out. The Liberal Party’s promise to return to UN peacekeeping operations will have been fulfilled and the election promise that Liberals would do peacekeeping and not warfighting (as in Afghanistan) will have been completed.

Now, any military mission has its dangers and those Canadian men and women in Mali should be saluted for the job they are doing, just like the men and women who took part in Canada’s gruelling 13-year war in Afghanistan. But where is the public interest in the mission? If Canadians are so in love with UN peacekeeping, why do we hear so little about the mission in the media? Any Canadian could be excused for having forgotten that they are there.

The fact that Canada chose to supply an aviation contingent to go to Mali, with little exposure to ambushes, firefights or IEDs, explains the thin line the Trudeau government is treading to fulfil an election promise designed to distinguish between peace-loving Liberals and war-fighting Conservatives (leaving aside that it was Liberals who put us in Kandahar province).

At the same time, Canadians have been sent to fight ISIS, to help the Baltic countries, to aid Ukraine in missions that will probably not end in war-fighting, but which are not UN missions and certainly not peacekeeping. 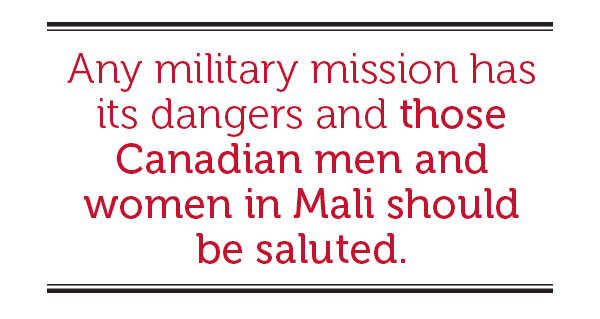 There is nothing inherently wrong with UN peacekeeping today. The Mali mission consists of heavily armed soldiers with robust rules of engagement. Canada could do that, too. But then Canadian soldiers might come home in body bags and that would be very bad for Liberal political fortunes.

Then there is the question of Canada competing for a UN Security Council seat. Here too, dreams of the past are the prime factor driving the government’s campaign. Just as today’s peacekeeping is very different from the Middle Eastern missions Canada did four decades ago, the world and the UN is not the organization it was when Canada last held a seat on the Security Council.

First, in this highly polarized world of three powers vying for supremacy, the Security Council can do little of any consequence. Second, the world’s nations are arranging themselves into interest blocs that mimic the competition among the great powers.

Canada once had a role to play in representing NATO in UN missions, but NATO is much larger today and enjoys less solidarity than at any time in its history.

There will always be self-appointed peace-loving Canadians who will pine for peacekeeping missions, but the Mali mission is the new reality.