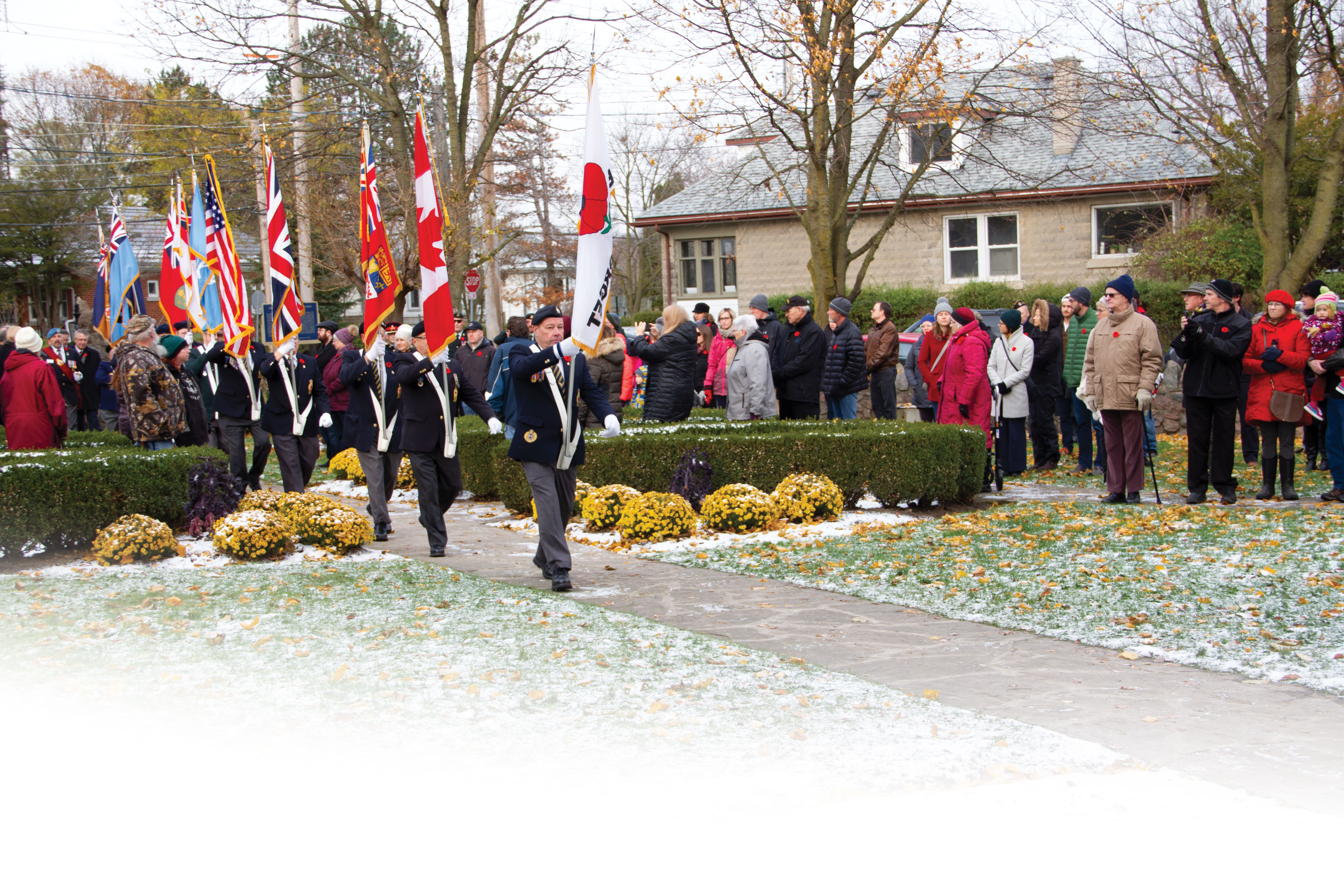 The colour party of Colonel John McCrae Memorial Branch marches on the flags in the garden beside McCrae House.
Tom MacGregor

It was a sunny, crisp morning with a fresh sprinkling of snow as the crowd gathered outside a little house along the Speed River in Guelph, Ont.

Here at 9 a.m., a small service marked the start of Remembrance Day. “I want to thank you for coming out on this very special of Remembrance Day ceremonies, when we mark 100 years since the guns went silent at the 11th hour on the 11th day of the 11th month,” said Reverend Mike Dell to the audience of about 100. 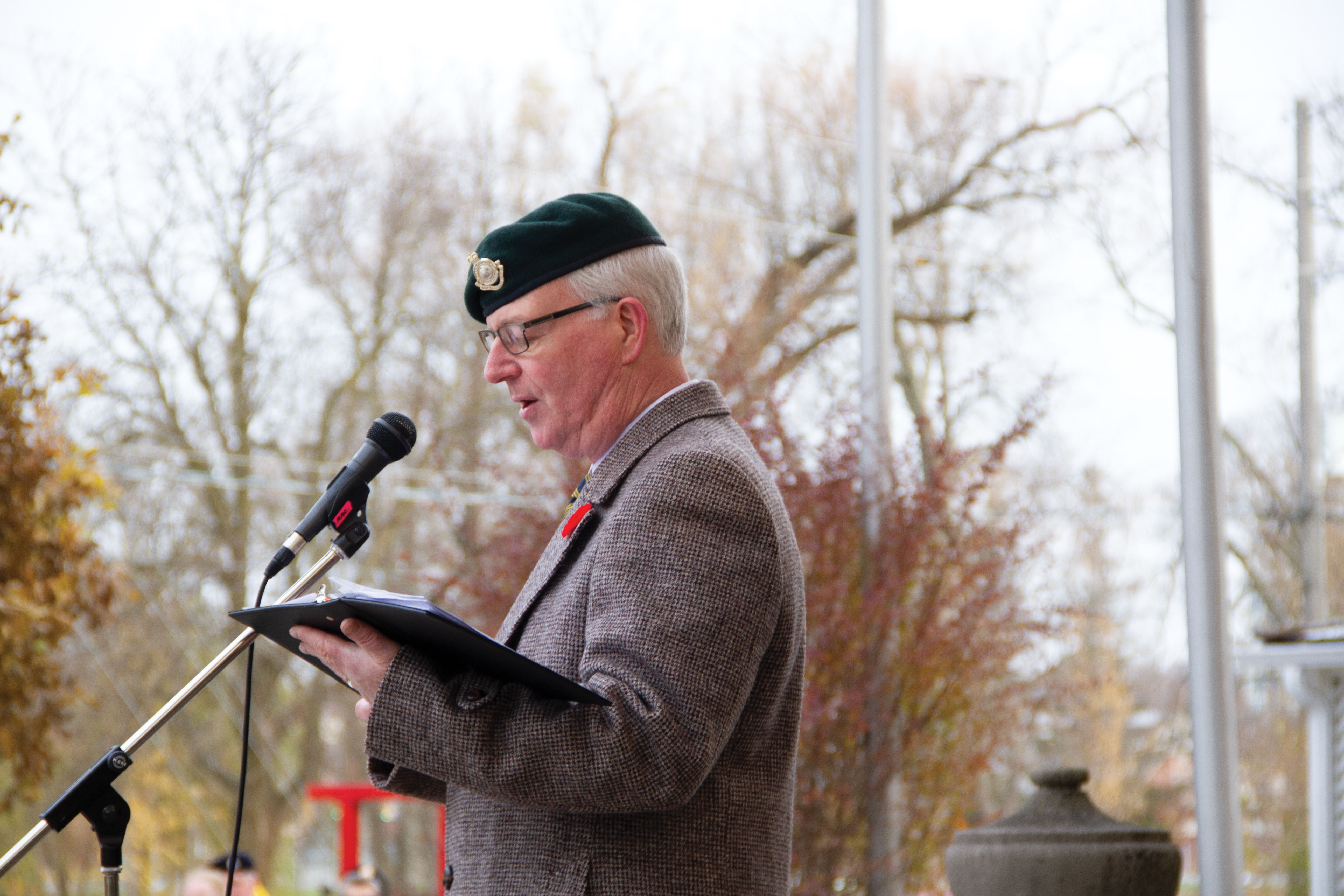 The service was not at the city’s cenotaph but at a small memorial built to remember soldier, doctor and poet Lieutenant-Colonel John McCrae, who was born in the house in 1872. Now called McCrae House, its ground level hosts a museum dedicated to Guelph’s famous son.

The colour party from the Legion’s Colonel John McCrae Memorial Branch in Guelph marched on the flags up a path in the adjacent garden. “Last Post” and “The Rouse” were played by Lieutenant-Commander Chris Patterson. Wreaths were placed on behalf of the Legion and by local politicians. Mayor Cam Guthrie, MPP Mike Schreiner and MP Lloyd Longfield placed one wreath together. With a blessing of the wreaths and the singing of “God Save the Queen,” the simple service ended. Sergeant-at-Arms Mike Roberts leads the parade through the streets of Guelph following the service in the Sleeman Centre.
Tom MacGregor

A much larger Remembrance Day service took place a few blocks away in the Sleeman Centre starting at 10 a.m. Some 4,000 people filled the seats in the arena, which is home to the Guelph Storm of the Ontario Hockey League. As those attending took their seats, the Guelph Concert Band, under the direction of Chris Cigolea, played hymns and songs popular during the First World War.

A moveable cenotaph stood in front of a podium guarded by sea, army and air cadets, and guests were seated in chairs nearby.

Master of ceremonies Kenneth Budd of Colonel John McCrae Memorial Branch started the service by announcing the placing of wreaths. The branch’s President Roy Fagel and L.A. Past President Madeline MacGregor placed the first wreath, followed by a parade of more than 100 presenters. As individuals came forward, tags on the wreaths were read aloud as reservists took the wreaths and placed them. All four sides of the cenotaph were soon covered.

At 11 a.m. sharp, “Last Post” was played by Patterson, followed by two minutes of silence, then “The Lament” (played by Pipe-Major Tyler Bridge) and “The Rouse.” The 11th Field Regiment, the reserve unit in which John McCrae had trained, conducted a firing party as 12 soldiers raised their rifles and fired three shots each. A rendition of “In Flanders Fields” was sung by the choir, led by Dale Hobbs. 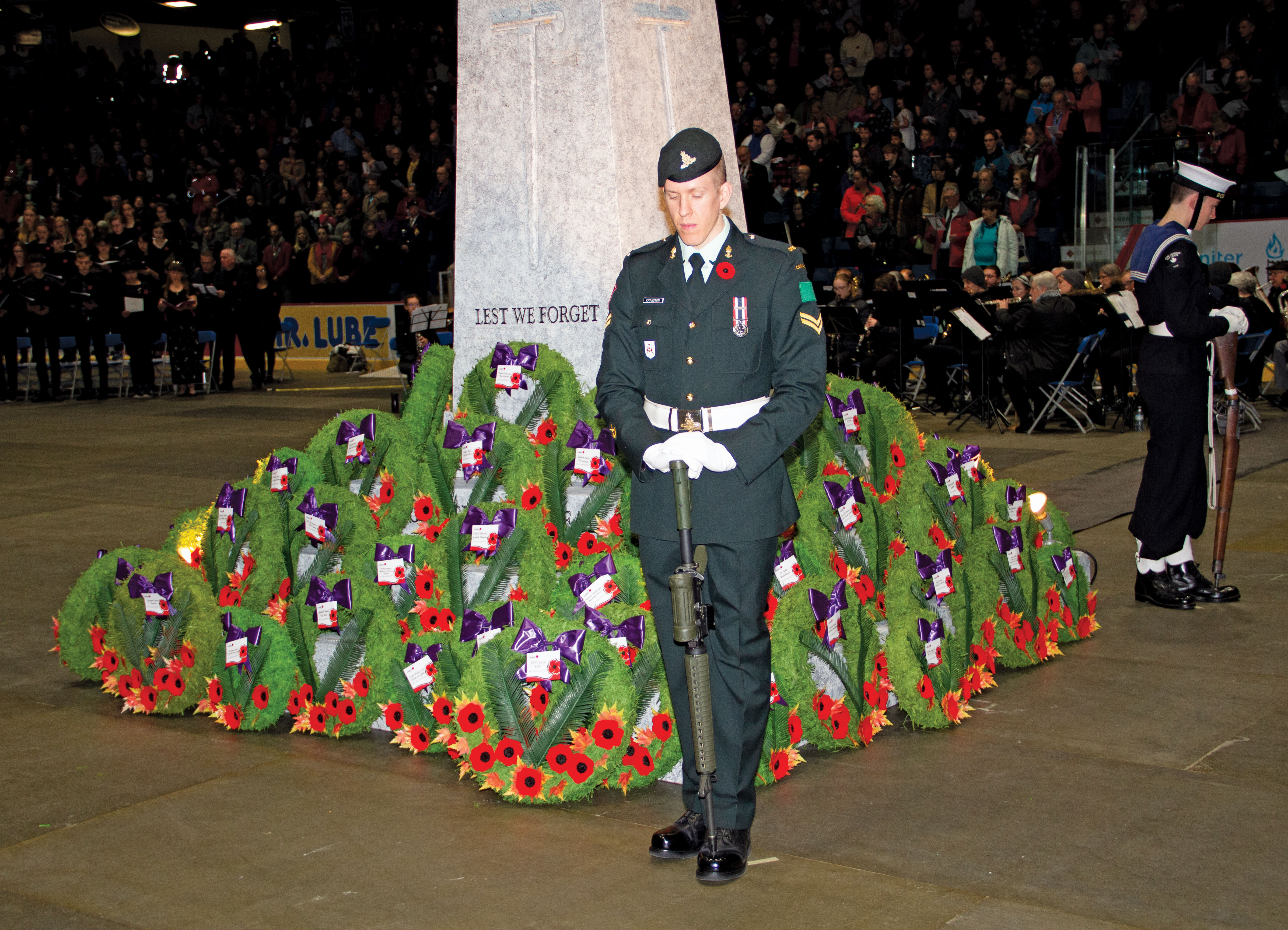 Guthrie brought greetings from the city of Guelph. Fagel then introduced guest speaker Lieutenant-Colonel G.M. McQueen, commanding officer of the 11th Field Regiment, who had spoken the evening before at the branch’s remembrance dinner.

McQueen spoke of Dutch people who described hiding in their basement as the Allies cleared Apeldoorn at the end of the Second World War, saying they were startled to hear noise in the house above. When they went up to investigate, there was a Canadian soldier playing the family piano. They knew then that, for them, the war was over.

He also described how, during one of his deployments to Afghanistan, he had seen an Afghan man he was working with change character completely when he got a new boss. “I tell these stories because here we do not hide in our basements from terrors or worry about losing our jobs or our lives when there is a change of government. That is because of those who served in times of war,” he said.

The service ended with prayers, hymns, “O Canada” and “God Save the Queen.” Sergeant-at-Arms Mike Roberts then led off the colour party. 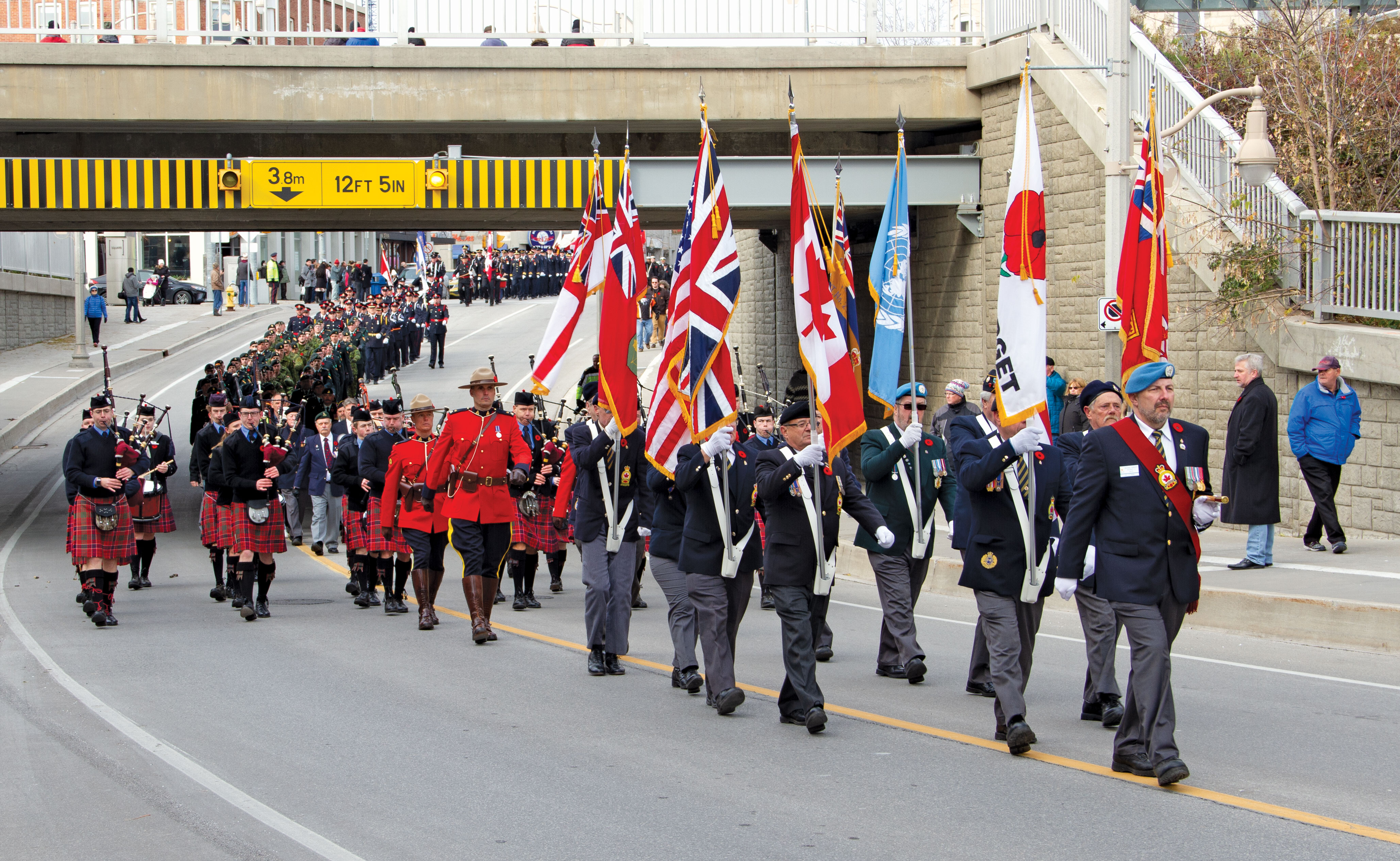 Sergeant-at-Arms Mike Roberts leads the parade through the streets of Guelphfollowing the service in the Sleeman Centre.
Tom MacGregor

Outside, a parade formed up to march past the city’s cenotaph, which had been guarded all night by cadets, and past a reviewing stand where Fagel, McQueen and other dignitaries took the salute. The branch colour party led the parade, followed by the Guelph Pipe Band, veterans, cadet units, scouts, girl guides and various other groups.

“I just kept looking behind me, and the parade was getting longer and longer,” Roberts said afterward.

Before closing the ceremony in the arena, Budd had explained that people should be listening, wherever they were, at five o’clock that night for the Bells of Peace ceremony performed at several local churches with bell towers.

Indeed, a small group gathered outside St. George’s Anglican Church that night. It is the only church in the region with a carillon.

Carillonneur Robert Jewell quickly ascended the 58 steps of a ladder and wooden staircase to the small room where the carillon keyboard is located. “I’m going to play ‘Last Post,’” he said. “I usually play by ear, but I’m going to read piano music tonight, so I get it right.” 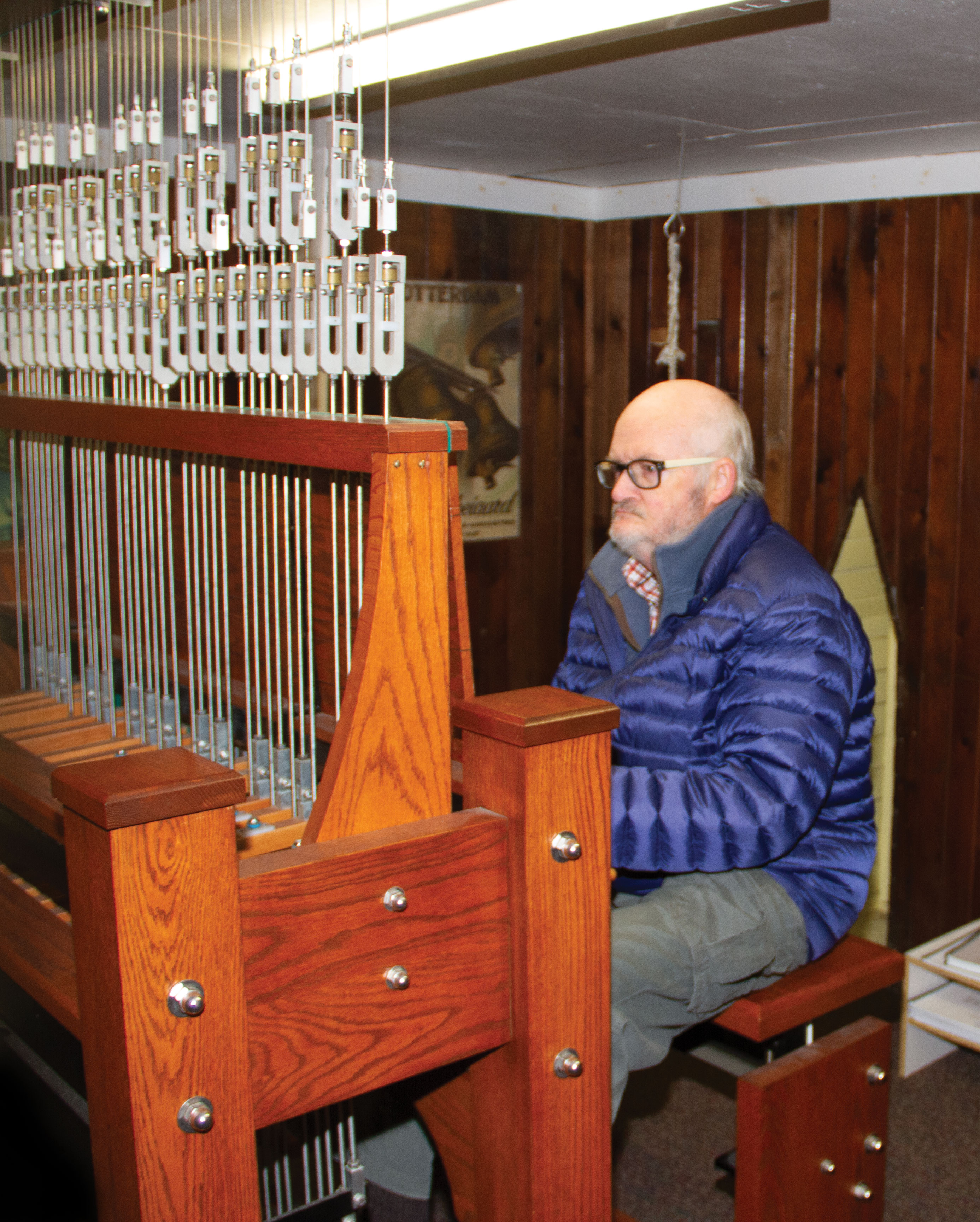 At five o’clock, the bells of the church chimed the time. Jewell waited for the last of the five rings of the big bell to fade and then he began to play.

When Jewell’s final note died way, Chief Carillonneur Donald Hamilton pulled the rope on a lower level to begin the ringing of the big bell 100 times. The doors to the church were opened so that the crowd of about 75 outside could watch in silence.

In the morning and at the setting of the sun, on the 100th anniversary of the Armistice, Guelph remembered.