Home » Blog » Humour Hunt » Laughing at life in the military

Laughing at life in the military 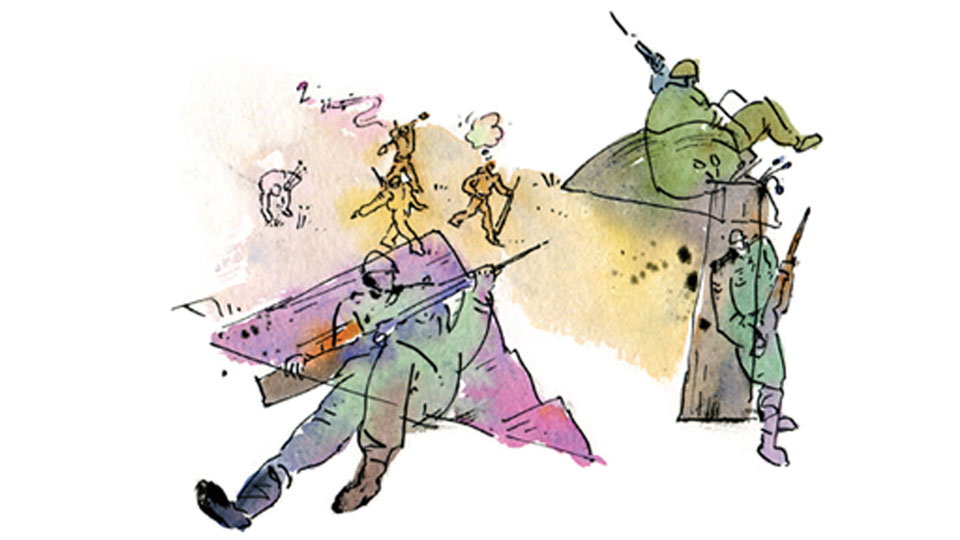 Most military jokes would make unlikely material for the local comedy club. A lot of them are the sort of “you had to be there” jokes that do not always translate.

Military humour, though, is as old as soldiers. It surely had an already long history back when Centurion Marcus got a chuckle by sending recruit Publius off on a wild goose chase to find a left-handed javelin.

In Vice-Admiral Horatio Nelson’s navy, his officers were aware that promotion likely depended on a higher than usual casualty rate among their superiors. So a traditional wardroom toast was raised to “A bloody war or a sickly season.” They also toasted “Wives and sweethearts! [Pause.] May they never meet.” But that was in a politically incorrect era.

Soldiers, sailors and aviators tell jokes or sing funny songs for many reasons. To get a laugh, to get attention and, often, as a kind of talisman against the dangers they face in military life, especially if that life involves combat. Making fun of threats has a way of reducing them, a bit at least.

So amid the horrors of the First World War, soldiers would sing a music hall ditty:

A generation later, Commonwealth aircrew called their Wellington bombers Wimpeys and appropriated the tune of “Waltzing Matilda” for a song that began:

Who’ll go on Ops in a Wimpey with me?

Many military jokes are based on service rivalry because, of course, the army looks down on the air force and the navy as tech-heads and dilettantes; the air force sees the other two as supporting arms at best and the navy takes note of its status as the senior service and ignores the upstarts.

There are also military adages to be considered: “Friendly fire isn’t.”

“If everything is going just right, you’re walking into an ambush.”

“Whoever said the pen is mightier than the sword never encountered automatic weapons.” That one applies well beyond the military.

Over the years, Canadian soldiers have earned a reputation as hard warriors on the battlefield and rambunctious non-conformists off it.

Ernest (Smokey) Smith, who received the Victoria Cross for heroism in Italy in 1944, said the army locked him in a cell before his flight to London for his investiture at Buckingham Palace. There was some concern that, left to his own devices in the fleshpots of Italy, then-Private Smith might have missed his meeting with King George.

My grandfather, who served in both world wars, had his own joke about his fellow soldiers. It deals with a British soldier on sentry duty.

He hears footsteps and offers the challenge: “Who goes there?”

The reply comes: “A British soldier.”

Another set of footsteps. “Who goes there?”

A third set of footsteps. “Who goes there?”

Jokes and funny comments come from all ranks. Retired major-general Lewis MacKenzie tells a story from his days as a commander in Sarajevo, when Canadian peacekeepers struggled to keep the city’s airport open against opposition from various factions.

One day, as MacKenzie walked across a square, a mortar barrage slammed down. He hit the pavement and looked around to find himself lying beside a reporter, who asked him, “Who started this?”

Winston Churchill, who was a soldier before he was a politician, had a puckish streak, which could be aimed at almost anyone.

At one point in the North African campaign, the British Eighth Army captured a senior German commander, General Wilhelm Von Thoma. The British commander, Bernard Montgomery, a teetotaller who would become a field marshal and a viscount, invited the German to dine with him.

This caused some consternation back home, but Churchill squelched it all with one comment: “I sympathize with Gen. Von Thoma. Defeated, humiliated in captivity and (with a pause for effect) dinner with Montgomery!”