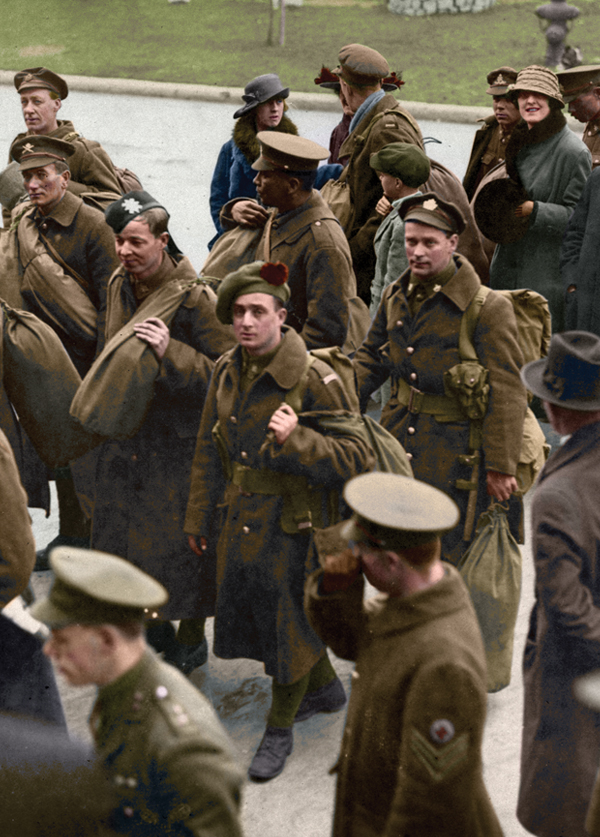 Demobilized soldiers gather at a dispersal station in Toronto in 1919.
DND/LAC/PA-023005

Winning wars lets countries tidy up some national stories, but losing wars often worsens domestic divisions. Winning certainly makes history appear neater: in the First World War, Canadians fought against tyranny for democracy and freedom—or so the story goes. But after a defeat, a nation can descend into social and political turmoil—that was Germany after the Great War. Soldiers returning from wars, both lost and won, unpack agendas, and it is often a challenge for a country to absorb hundreds of thousands of veterans for whom violence was their professional language.

Germany in the 1920s was plagued by hyperinflation, threat of revolution and veterans who felt betrayed by the surrender. Fascists fed the unrest, seized power and brought on the Second World War. But in Canada was the return of 400,000 First World War veterans that different? It was, of course, but at the same time, it wasn’t. 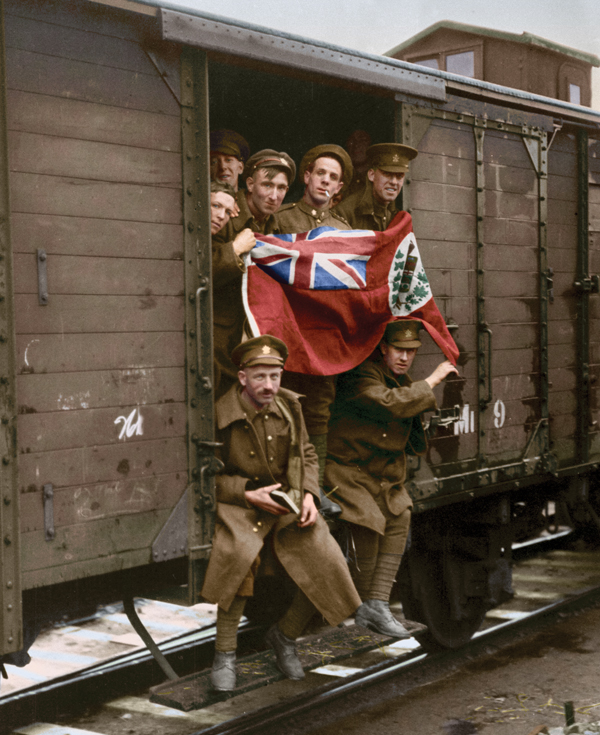 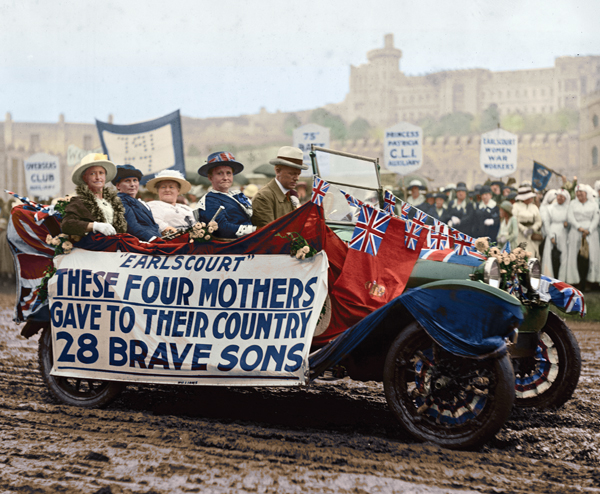 Mothers of soldiers participate in a parade in Toronto.
City of Toronto Archives/Fonds 1244, Item 727

Canadian veterans returned home victorious. They were saluted in parades as crowds cheered and Union Jacks flew, and then they returned to their families carrying with them the legacies of war. Few knew how to treat what we now call post-traumatic stress disorder. We cannot know how many First World War veterans committed suicide, but we can estimate.

Recently the Canadian Forces lost 158 men and women in Afghanistan, and since returning home, 70 others have taken their lives—a heart-stopping number that will probably continue to climb, one casket at a time. If we take that ratio as our tragic guide, then perhaps more than 850 veterans took their lives in the decades after the Great War. Surely this cannot be true, especially since we assume that men were tougher back then—which is a groundless assumption. If it is true, does that not make you rebel that this story is not told? Conducting interviews for a project on Vimy veterans, I spoke with some of their children. One described it this way: “My dad fought the war every night of his life. Two or three times a week, my brother and I had to go into his room and jump on his chest to wake him up.” 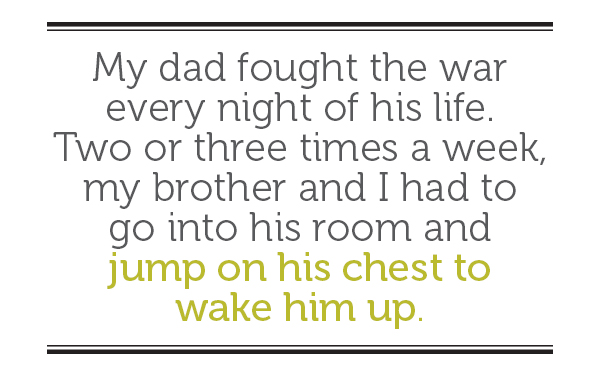 Did Canada care for those who returned? Of course, it did—but not for all. Given the prudish streak in Canadian morality, how was a veteran to explain to his wife or girlfriend that he had returned with venereal disease? At a time before effective antibiotics, Canadian soldiers had a higher rate of STDs than any other army in Europe—67,000 cases over the course of the war. Pressure from prudes about soldiers’ moral health prevented the army from issuing condoms. But what else would you expect from thousands of (mostly) young men who spent years in a war zone? Unlike European soldiers, Canadians never reached home while on leave, and their pay was higher than soldiers in other armies, so the temptation to have sex was all the more. On returning home, what was a man to reveal about his sexual stigma? How many hid it, turned to addictions, were ostracized, or chose to end it all? In Matrons and Madams, Sharon Johnston writes about her grandmother’s experience as a nurse in Lethbridge, Alta., trying to counter the ignorance levelled at veterans who had risked their lives in war only to be rejected at home. 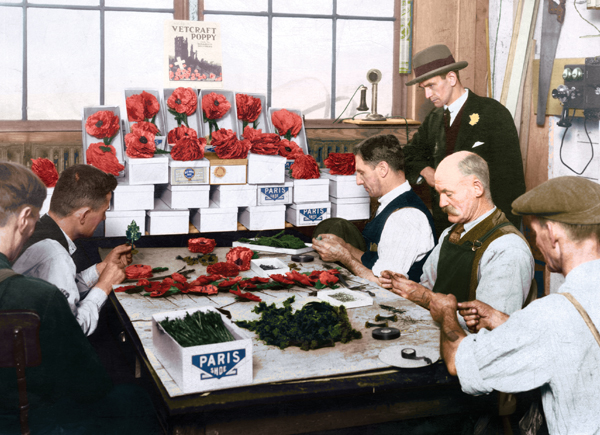 Veterans also returned to a nation of divisions. In 1914, Canada was defining itself, and tensions surrounded the definition. A Chinese head tax was in place. In 1914, Sikhs aboard the Komagata Maru in Vancouver Harbour were turned away for racist reasons. There were multiple First World War Canadas—British, French, non-British immigrants and First Nations. As Brock Millman points out in Polarity, Patriotism, and Dissent in Great War Canada, it was primarily British Canadians who supported the war, and their sons were the majority of the volunteers for the army.

“If we are going to save Canada for the Anglo-Saxon race, now is the time to begin doing it….”
—H.S. Clement, 1917, quoted in Polarity, Patriotism, and Dissent in Great War Canada by Brock Millman

Non-British Canadians—many referred to as Polaks and Bohunks—often took the jobs of Anglo-Saxon Canadians who were dying on the battlefields. Pro-British sentiments intensified among those determined that Canada would be an Anglo-Saxon nation. The casualty lists grew each year, and after the unimaginable losses at the Somme in 1916, the number of volunteers dropped significantly. With the war expected to last until 1919 or 1920, where was the army to get new recruits? A heated debate arose about whether or not to impose conscription. The resulting crisis drove a wedge between French and English Canada and heightened racial resentments. Ukrainians, Poles, Austrians, Germans and others were called enemy aliens, and war patriotism turned toxic when aimed at those who opposed conscription.

“The only objectors will be the slackers, who will now be forced to do what their small-souled patriotism failed to teach them….”
—Brantford Courier, 1917 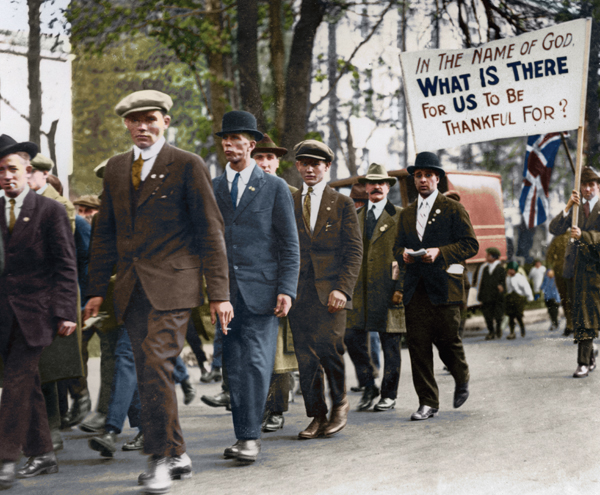 War veterans in Toronto protest the lack of work after the war.
City of Toronto Archives/Fonds 1244, Item 903 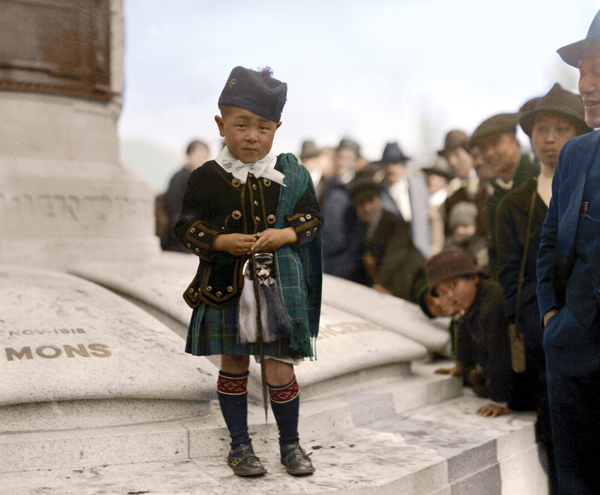 A Japanese-Canadian child wears a kilt at the Japanese Canadian War Memorial in Vancouver, circa 1920.
Archives of the City of Vancouver, AM54-S4-: Mon P41.1

Many British Canadians felt betrayed because the aliens and French Canadians hadn’t sent as many of their sons. Defeat was a real possibility and the Great War Veterans Association, an angry advocacy group of those already returned home, made itself felt politically.

The messy bits of our history were that anti-conscription riots broke out in Quebec in 1918, and people were killed. In light of the rebellion in Ireland in 1916 and the Russian Revolution in 1917, the Canadian government was determined to suppress dissenters. In the charged atmosphere of ‘Are you a patriot or are you an alien?’ debates, intolerance was a means of showing your loyalty to Imperial Britain. In 1917, as part of the Wartime Elections Act and to strengthen the Anglo-Saxon brand, the right to vote was taken from everyone who had immigrated after 1902, except for those who served and their families. It was even proposed that some alien Canadians should lose their land after the war. All of this played out against a possible German victory and the dilemma of managing the unrest that 400,000 embittered Canadian veterans might bring home with them.

Instead, victory arrived and the untidy stories retreated. Yet they existed. Members of First Nations and Japanese Canadians did not get the vote until decades after the war, even though many had fought and died. Wong Tan Louie, a Chinese-Canadian veteran, was refused a licence, for racist reasons, to open a radio store in Orillia in 1934. Only after sending his uniform and medals in protest to Prime Minister Mackenzie King was a licence granted.

I remember the old First World War men in my town. At six, I was curious about the empty pant legs or the strange motion of sleeves that held no arms. My father took me to a hospital’s veterans’ ward, and I remember the ancients, many with clouded eyes like those of our old dog. I leave it to the Great War soldier-poet Wilfred Owen to give voice to the thousands who lived in a postwar world of wheeled chairs and absent limbs and dreams:

Some cheered him home, but not as crowds cheered Goal
Only a solemn man who brought him fruits,
Thanked him; and then enquired about his soul.

Now, he will spend a few sick years in institutes,
And do what things the rules consider wise,
And take whatever pity they may dole.
Tonight he noticed how the women’s eyes
Passed from him to the strong men that were whole.
How cold and late it is! Why don’t they come
And put him into bed? Why don’t they come?

Veterans learn handicrafts as part of a Department of Soldiers’ Civil Re-establishment program, circa 1918-19.
Peake & Whittingham/LAC/PA-068115

Members of the Amputations Association of the Great War (known today as The War Amps) at their convention in Vancouver in 1932.
Archives of the City of Vancouver/AM1535-: CVA 99-4257 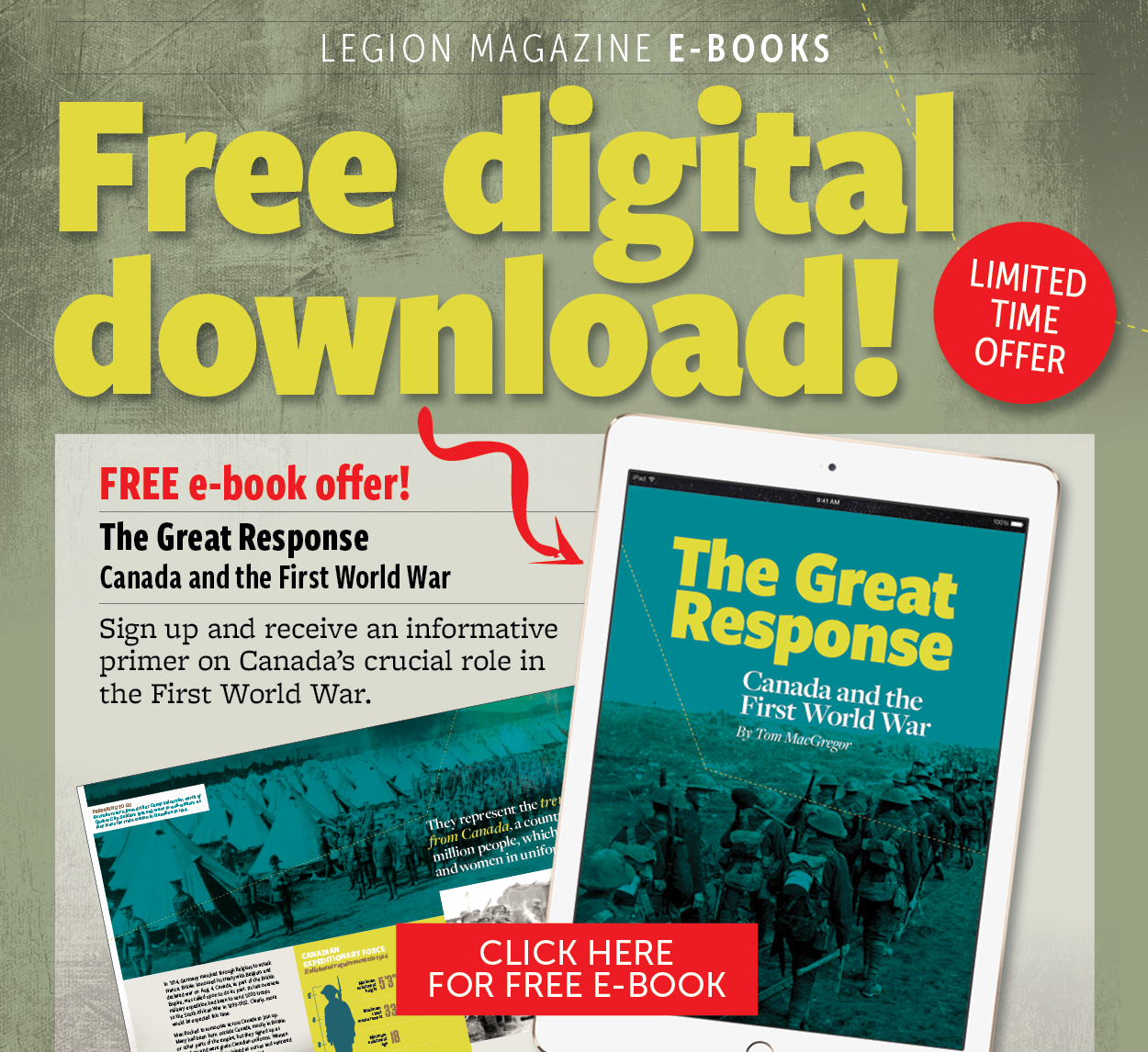 PrevPrevious ArticleErnie Verhulst (Part 1): A wide-eyed boy in Rotterdam, May 1940
Next ArticleVeterans benefit from correction and settled lawsuitNext