Home » Our Veterans » Remembrance » Armistice Centenary: The symmetry of Mons (Pt.2 of 4)

Armistice Centenary: The symmetry of Mons (Pt.2 of 4) 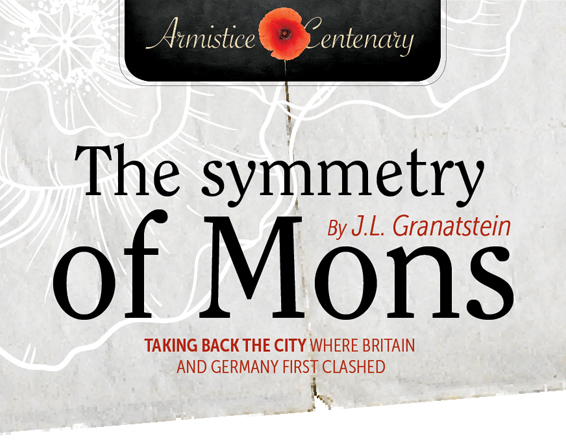 On Aug. 4, 1914, the German Army launched its Schlieffen Plan against France. The plan sent the German Second and Third Armies on a huge wheeling movement through Belgium, and they moved quickly westward toward the French border. On Aug. 23, they came into contact with the British Expeditionary Force (BEF) at Mons, Belgium. The BEF had landed in France six days before and moved east, taking up positions along the Mons Canal. They held out for a day against overwhelming numbers, and then began a long, hard retreat toward Paris. The German advance would be checked at the Marne River and soon the war of the trenches was underway. Mons would remain in German hands until the very end of the war.

It was the Canadian Corps’ task to liberate the city on Nov. 10-11, 1918. The Corps’ officers and men knew they had inflicted severe defeats on the enemy in the great battles they had fought since their advance on Aug. 8 at Amiens. They understood that the Germans were asking for terms, but few trusted an enemy who had fought a vicious war, used poison gas, waged unrestricted U-boat warfare, and brutalized civilians in their occupied territories. Moreover, the orders from higher headquarters were clear: keep the pressure on until the enemy gave up. 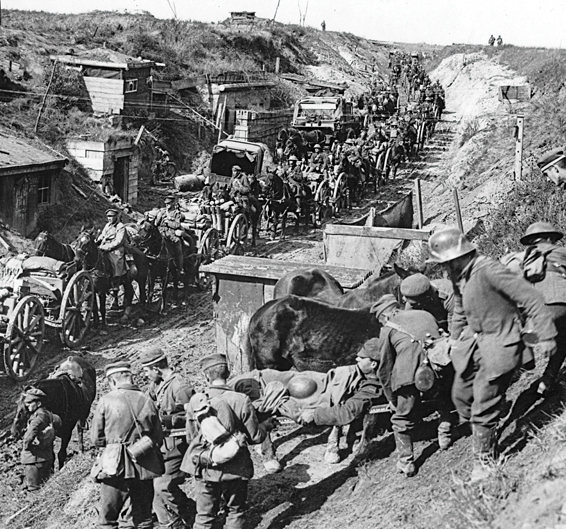 A Canadian advanced dressing station on the former German line east of Arras in September 1918.
DND/LAC/PA-003248

Certainly, there were few signs of surrender. The Germans had fought hard at the Drocourt-Quéant Line and the Canal du Nord in September, and their machine gunners often resisted to the death through October and into November. The enemy was in full retreat by the first week of November, but continued to try to slow the Canadian advance.

Lieutenant-General Arthur Currie, the Canadian commander, had received his orders to take Mons, and the Royal Canadian Regiment (RCR) and the 42nd Battalion (Royal Highlanders of Canada) of the 3rd Division were given the task on Nov. 9. The city was ringed by canals and German gunners covered the crossing points.

“The enemy garrison on the night of Nov. 10 consisted only of a screen of snipers and machine-gunners posted in upper rooms of houses and at other points from which they could command the roads and approaches,” wrote Lieutenant-Colonel C. Beresford Topp of the 42nd Battalion. “The advance began in daylight and the Highlanders at once came under fire, particularly from machine guns, and it was apparent that an attempt to force an entrance to the city by daylight would be costly. Further movement was delayed until dusk, and eventually the capture of Mons was effected by one platoon of ‘D’ Company, which walked across the railway yard and entered the city without firing a shot.”

By 11 p.m. on Nov. 10, elements of the 42nd with an RCR company attached had moved across the canal and into the town. Later, two RCR companies made their way into Mons.

“The whole city was exceedingly quiet,” wrote Topp. “There was no movement, no evidence of any civilians and not a shot was fired. The only sound was the crackling of the flames in several burning buildings which had been set alight by shellfire.”

At 7 a.m. on Nov. 11, the 42nd’s pipe band paraded through the city to wake the 60,000 citizens who soon thronged the streets waving flags and cheering their liberators. “Great celebrations,” Private Harold Davey wrote in his diary. “Everybody rejoicing. Promenading….”

Canadian Corps headquarters had learned at 6:30 a.m. that the Germans had accepted the Allies’ terms and that the armistice was to come into effect at 11 o’clock. Some units did not learn of the ceasefire until after 9 a.m., while civilians and soldiers were already celebrating. The last Canadian killed, Private George Lawrence Price, died from a sniper’s bullet a few moments before 11 a.m.

Currie understood that there was important symmetry in the liberation of Mons. Four years and three months after the BEF had been forced to retreat, the Canadians, soldiers from the colony, men whose efforts had forged a nation, had freed the Belgian city. The Great War had changed the world and helped reinvent Canada. 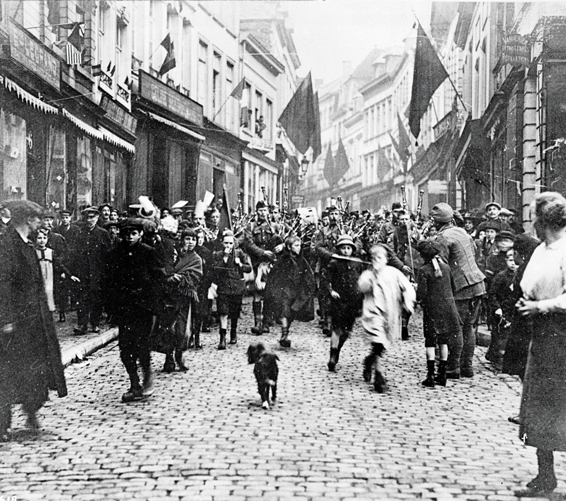 Piping in peace: The pipe band of the 42nd Battalion plays its way into the liberated city of Mons, Belgium, on Nov. 11, letting citizens know their war was over. Later in the day, the band led troops to their barracks, then participated in a parade.
DND/LAC/PA-003523

PrevPrevious ArticleHeroes and Villains | Foch & Erzberger
Next ArticleArmistice Centenary: Last to fall (Pt.3 of 4)Next