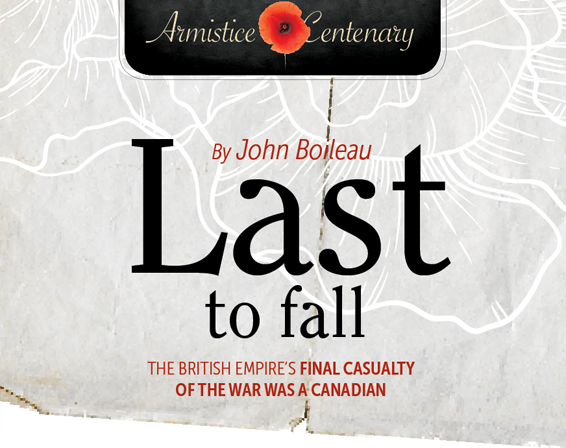 5:12 a.m., Nov. 11, 1918  After three days of negotiations, Allied and German representatives meet in a railway carriage parked in a forest clearing northeast of Paris and sign an agreement to end four years of fighting. Germany wants the ceasefire to come into effect immediately, but the Allies want time to get word to front-line troops. As a result, the armistice starts six hours later, at 11 a.m.

5:40  News of the ceasefire reaches the belligerents’ capital cities long before it reaches front-line soldiers. Celebrations begin in London and Paris before word arrives in the trenches. Most soldiers assume it is just another day in the long war and are concerned with simply staying alive. Many will die before 11 a.m., including 863 British Empire soldiers.

The Americans in particular take heavy casualties this day because their commander, General John (Black Jack) Pershing, believes the Germans need to be taught a lesson by being crushed militarily. As a result, more than 3,000 Americans needlessly become casualties when field commanders order their troops to attack in the final few hours before the armistice comes into effect. 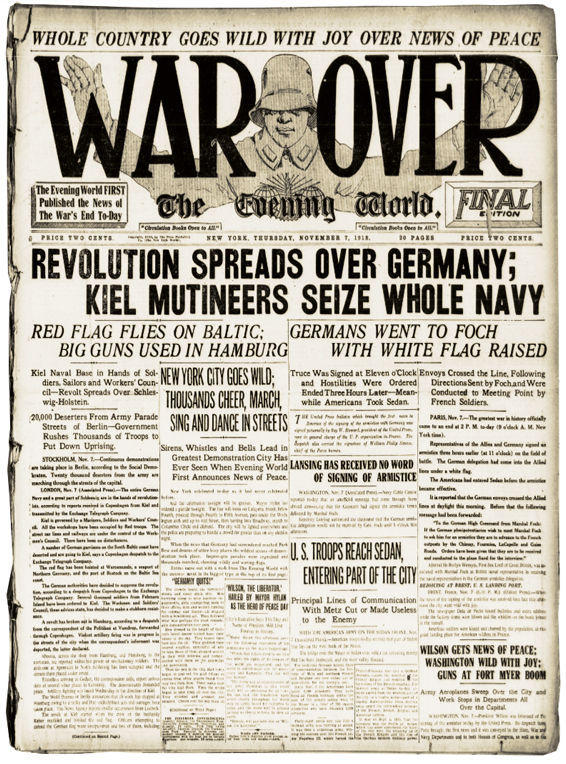 The front page of New York’s Evening World declared the war over on Nov. 7, 1918, four days before the armistice was signed.
New York Public Library

9:30  Private George Edwin Ellison, 40, of the 5th Royal Irish Lancers is scouting near Mons, Belgium, where German troops have been seen in a wood close by. Ellison is not a conscript, but a pre-war regular soldier. He has been to Mons before. A few days after the war broke out in August 1914, Ellison was dug in with the British Expeditionary Force at Mons, waiting for the German army as it marched triumphantly across Belgium.

Since then, almost one million British soldiers have died, yet Ellison has somehow survived. A former coal miner, no doubt he is thinking about going home to Leeds, where his wife, Hannah, and their four-year-old son, James, wait for him. Then a shot breaks the silence and Ellison falls. He is the last British soldier killed in action on the Western Front.

10:44  Not far away, by the Meuse River in the Ardennes Forest, another 40-year-old soldier, French Private Augustin-Joseph Victorin Trébuchon of the 415th Infantry Regiment, who also has been serving since the start of the war, is a runner. He carries a message to the troops saying that soup will be served at 11:30 a.m., after the truce begins. Another shot rings out and Trébuchon falls, still clutching the message. He is the last French soldier to die in combat on the Western Front.

10:57 Meanwhile, on the northern side of Mons, Canadian Private George Lawrence Price, 25, of the 28th Battalion (Northwest), is following the retreating Germans. Price was born in Falmouth, N.S., and raised in nearby Port Williams. As a young man, he moved to Moose Jaw, Sask., although his parents, Jim and Annie, remained in Nova Scotia. He was conscripted in December 1917.

Price’s patrol is fighting from house to house in the small village of Ville-sur-Haine. He enters a cottage just as some German soldiers leave through the back door. He exits the cottage and enters the house next door, but it, too, is empty. As he steps out of this house onto the street, a sniper shoots him through the right breast.

10:58  Price dies. He is the last Canadian—and the last British Empire soldier—killed in action on the Western Front before the armistice comes into effect.

10:59  In the Argonne region farther south, American Private Henry Gunther of Baltimore’s 313th Regiment—who had only arrived at the front in mid-September—takes part with a buddy in a last-minute charge against two enemy machine-gun posts. The Germans are astonished; don’t the Americans know an armistice will come into effect in a minute?

They try to wave the Americans off and fire a shot or two in the air. But still the two doughboys keep coming. Then the Germans take careful aim and Gunther—coincidentally of German descent—is felled. He is the last Allied soldier killed in action on the Western Front. 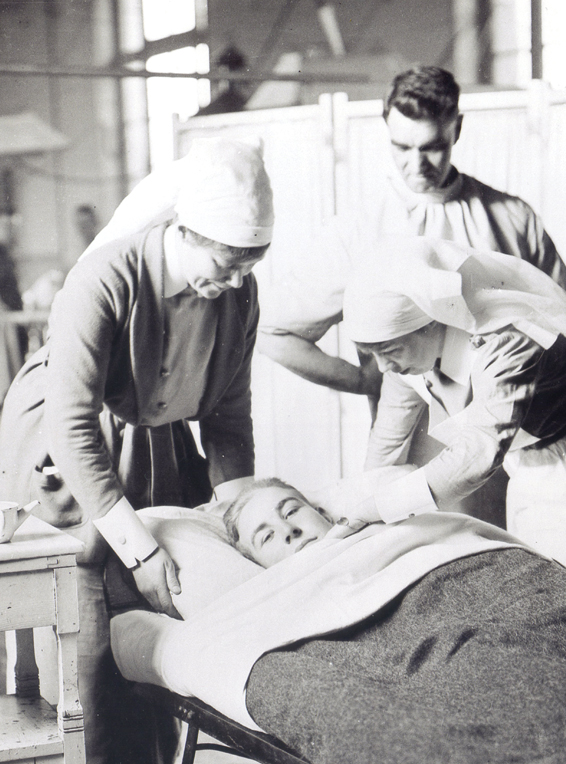 Although the name of the last German soldier to die before the armistice is unknown, it is widely accepted that a Lieutenant Tomas was probably the last German casualty on the Western Front. As he approached some American soldiers shortly after 11 a.m. to tell them the war was over, they opened fire and shot him. Apparently, they did not get word of the armistice.

While these deaths on the Western Front are well documented, it is now known that several soldiers from both sides died on other fronts in the far outposts of war after the armistice came into effect. This includes several Canadians in Russia, where our troops served until late 1919.

From the British viewpoint, the First World War started and ended at Mons. In St. Symphorien Military Cemetery, two kilometres east of Mons, are 164 identified casualties (out of a total of 514 graves). Among them are 129 British soldiers killed in August 1914 and two Empire soldiers killed on Nov. 11, 1918.

They include the grave of Private John Parr of the 4th Battalion, Middlesex Regiment. Although his birth date is unknown, his year of birth was 1898, making him only 15 or 16 when he was killed on Aug. 21, 1914. Parr was the first British Empire soldier killed in the war. By a strange quirk of fate, Parr’s grave faces Ellison’s, the last British soldier to die.

The same cemetery also contains the grave of Lieutenant Maurice James Dease, 24, of the 4th Battalion, Royal Fusiliers, who died on Aug. 23, 1914. For standing firm and continuing to direct the fire of his machine-gun section against repeated German attacks, he received a posthumous Victoria Cross, the first VC of the war.

And almost opposite Dease’s headstone in the next row is the grave of Price, Canada’s last combat casualty in “the war to end war.”

Termination of hostilities on the Western Front, on land and in the air, within six hours of signature

Immediate evacuation of France, Belgium, Luxembourg and Alsace-Lorraine within 15 days. Sick and wounded may be left for Allies to be cared for

Vacated territory to be occupied by Allied and U.S. troops, maintained at Germany’s expense

All minefields on land and sea to be identified

All means of communication (roads, railways, canals, bridges, telegraphs, telephones) to be left intact, as well as everything needed for agriculture and industry

Immediate withdrawal of all German troops in Romania and in what were the Ottoman Empire, the Austro-Hungarian Empire and the Russian Empire back to German territory as it was on Aug. 1, 1914, although tacit support was given to the pro-German West Russian Volunteer Army under the guise of combating the Bolsheviks. The Allies to have access to these countries

Evacuation of German forces in Africa

Free access to German waters for Allied ships and for those of the Netherlands, Norway, Denmark and Sweden

The naval blockade of Germany to continue

Immediate release of all Allied prisoners of war and interned civilians, without reciprocity

Pending a financial settlement, surrender of assets looted from Belgium, Romania and Russia 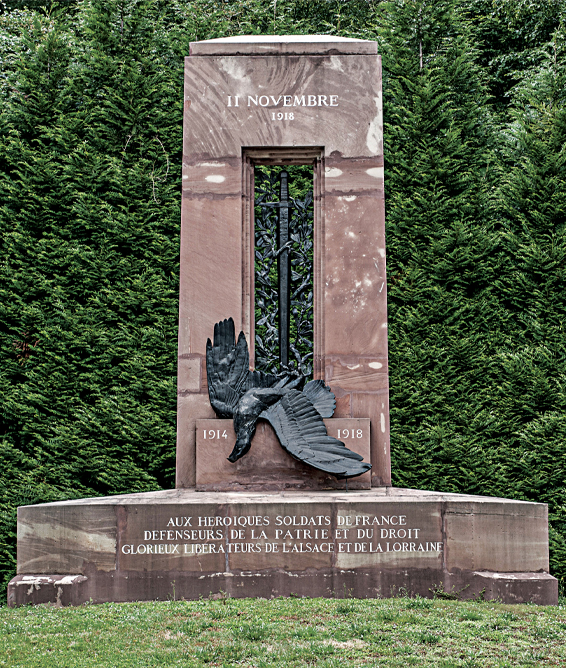 Glade of the Armistice: The clearing in Forêt de Compiègne where Foch’s rail car was pulled over on a siding is today known as the Glade of the Armistice. A museum houses a replica of the original carriage as well as artifacts, documents and photographs. Outside is a monument depicting a German Eagle impaled by a sword. After winning the Battle of France in June 1940, Hitler ordered the monument destroyed. It was rebuilt after the war.
Collection Philippe Clement/Alamy/E3E75R

PrevPrevious ArticleArmistice Centenary: The symmetry of Mons (Pt.2 of 4)
Next ArticleInside Afghanistan: Remember the Afghan translatorNext