Home » Defence Today » Front Lines » Jack Widdicombe: From combine to Lancaster and back 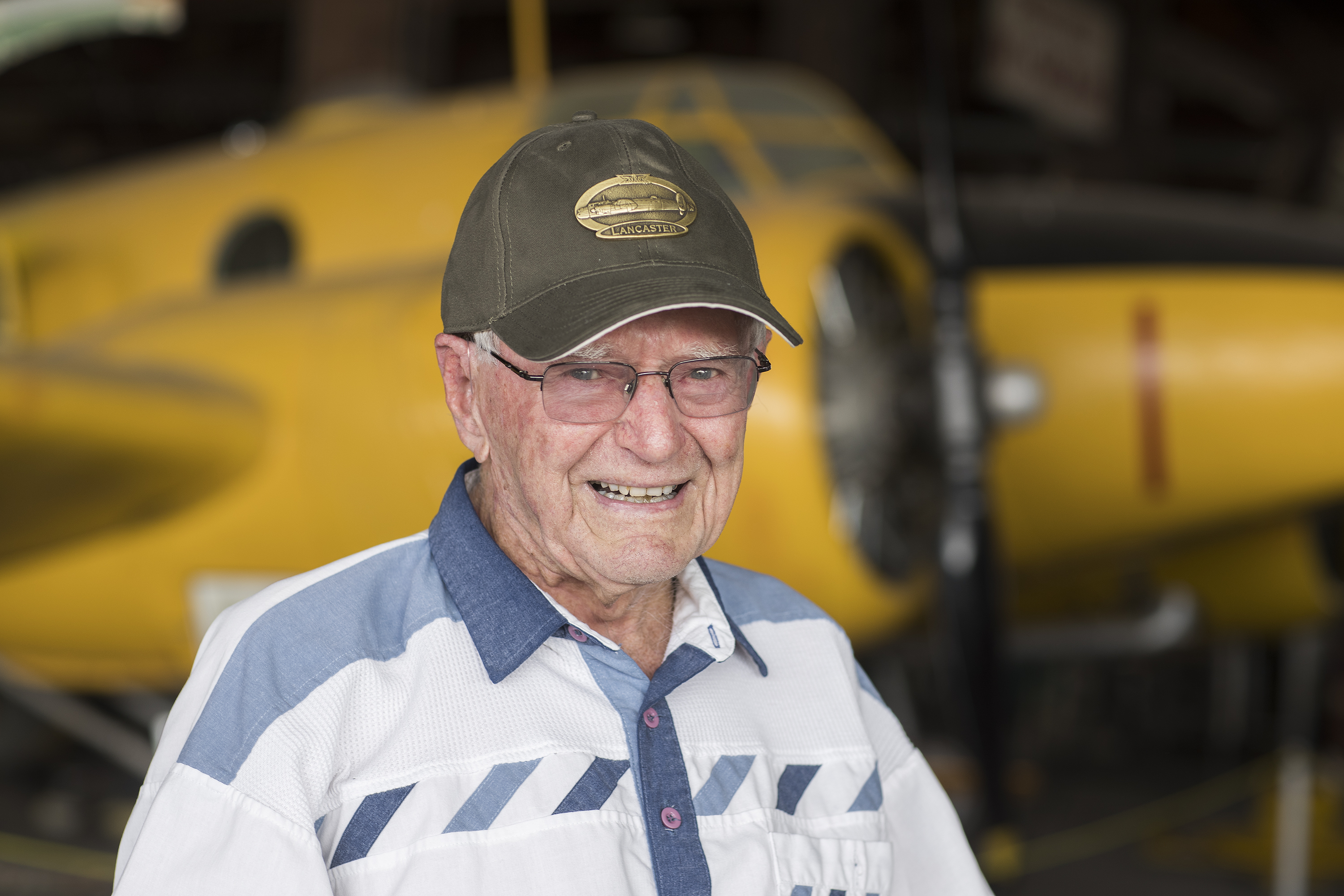 Jack Widdicombe, 97, Lancaster pilot, with an Avro Anson Mark 5 like one he used to fly on “staff jobs.” The plane is part of the collection at the British Commonwealth Air Training Plan Museum in Brandon.
Stephen J. Thorne/Legion Magazine

Lancaster pilot Jack Widdicombe was a wide-eyed Prairie farm boy about to be thrust into the inferno of Second World War Europe when he boarded a double-decker bus and toured London shortly after arriving in England.

The 21-year-old native of Foxwarren, Man., and a pal set out to see the sights and instead encountered block after block of rubble. Twenty-three bombing missions over Nazi territory and 1,200 hours of combat  and other wartime flying lay ahead of him.

“We drove for an hour and it was total destruction,” Widdicombe recalled in a recent interview at the British Commonwealth Air Training Plan Museum in Brandon. “I said ‘how in the world can people do that to one another? Why don’t people refuse to do it?’ Then a year later, I was doing it.

“It took me a long time to get my head around that.” 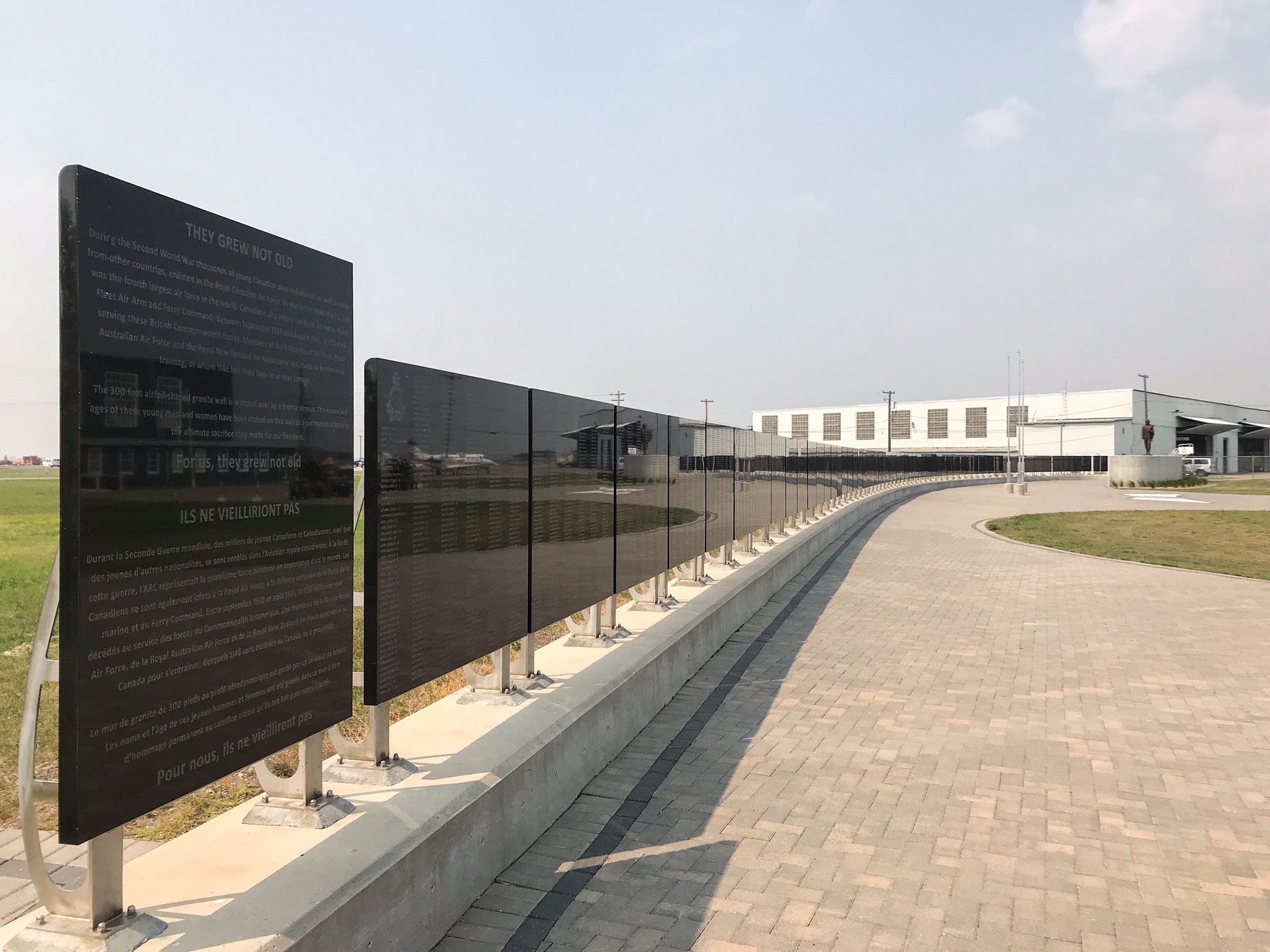 (Click-to-Enlarge) Memorial wall at the British Commonwealth Air Training Plan Museum in Brandon. It lists all 18,039 aircrew killed while serving in the forces of Canada, Britain, Australia and New Zealand during the Second World War. Some 131,553 aircrew, including pilots, wireless operators, air gunners and navigators from all four countries were trained at 151 schools across Canada between 1940 and 1945.
Stephen J. Thorne/Legion Magazine
Now 97, the lifelong farmer remains sharp as a tack and has no regrets. He hitched a ride to the museum from his longtime home in Russell aboard a small four-seat plane, bent on watching an airshow by vintage training aircraft while his wife of 71 years, Florence, 95, was off indulging in her passion, singing.

Widdicombe talked of flak-filled skies, attacks by Luftwaffe night fighters, and pressing home a bombing run on three engines. He recalled with affection the tight bonds and lifelong friendships he shared with his six-man crew, and reflected on the fact he is the last of them alive.

Flight Lieutenant Jack Widdicombe was among 131,553 aircrew—pilots, wireless operators, air gunners and navigators—from Great Britain, Australia, New Zealand and Canada to train at 151 schools across the country between 1940 and 1945. 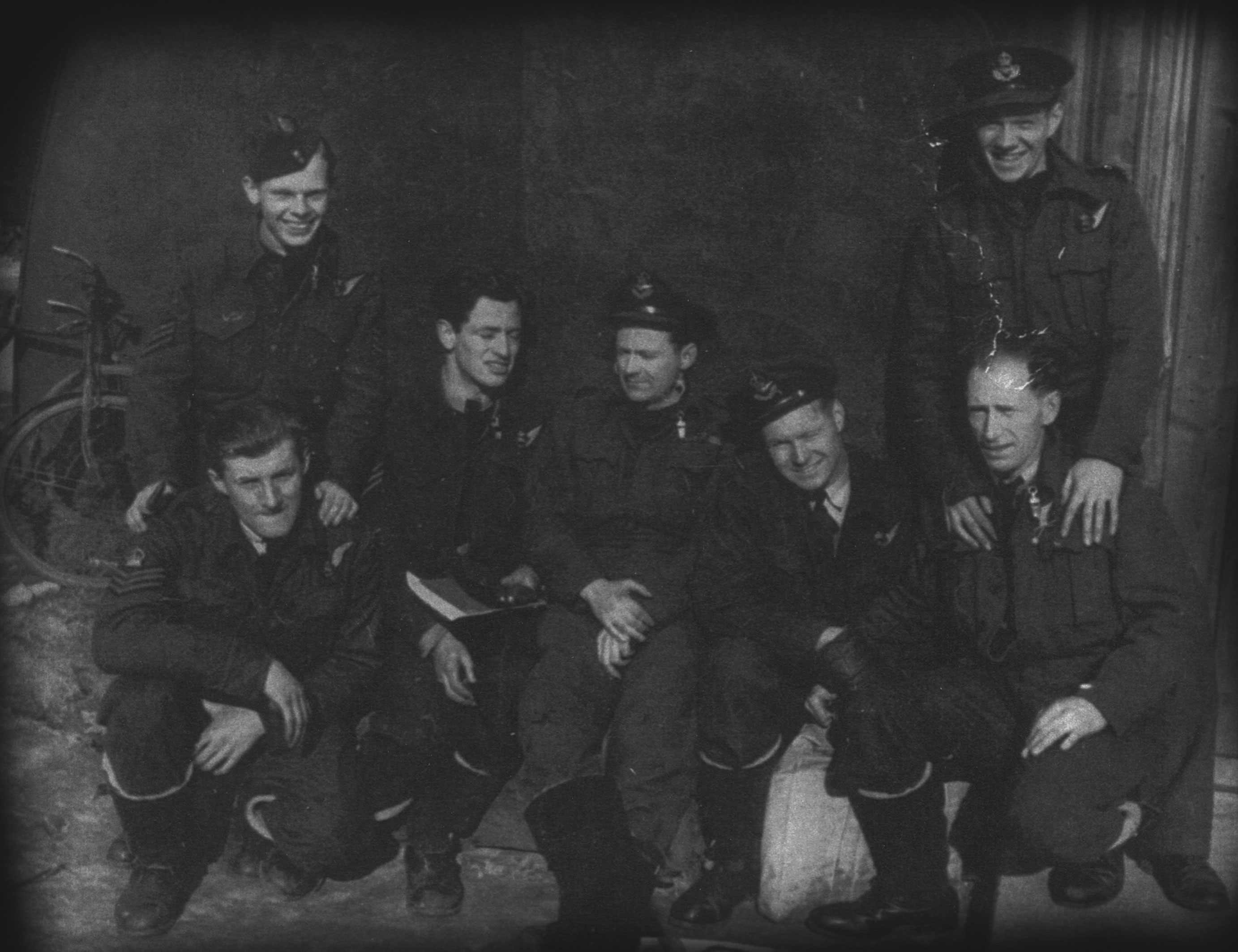 On that first raid, they hit Chemnitz, an industrial city and railway hub near the Czech border, “a long trip” of eight to nine hours return. The target? “In those days, it was the town, more or less,” said Widdicombe. “It was always a priority, what you tried to hit, but. . . .”

His voice trails off, then rises again as he announces that his tail-gunner, Gordon Cotter from Oshawa, Ont., shot down a Me-210 fighter that night. Both Cotter and mid-upper gunner Steve Kranyak from Hamilton were “firing like crazy” as the Luftwaffe twin-engine aircraft attacked from behind.

Staging out of a chain of bases in northern England, 419 Squadron flew 4,325 wartime sorties, according to the squadron website. They lost 129 aircraft and 618 crewmembers. Another 197 crew were captured, two escaped and 25 evaded capture.

Its flyers included Victoria Cross recipient Andrew Mynarski, killed in June 1944 at age 27 while trying to save a trapped crewmate as their bomber went down over France.

A 19-year-old Widdicombe chose the air force after signing up for the infantry. Just five-foot-seven, he concluded during his first bayonet drill that he was at a distinct disadvantage. His commanding officer, however, denied his request for a move.

That didn’t stop Widdicombe. He sashayed over to the RCAF recruitment office, where he was accepted without hesitation: “If you want to hide from the army, the best place to go is the air force,” the recruiting officer told him. 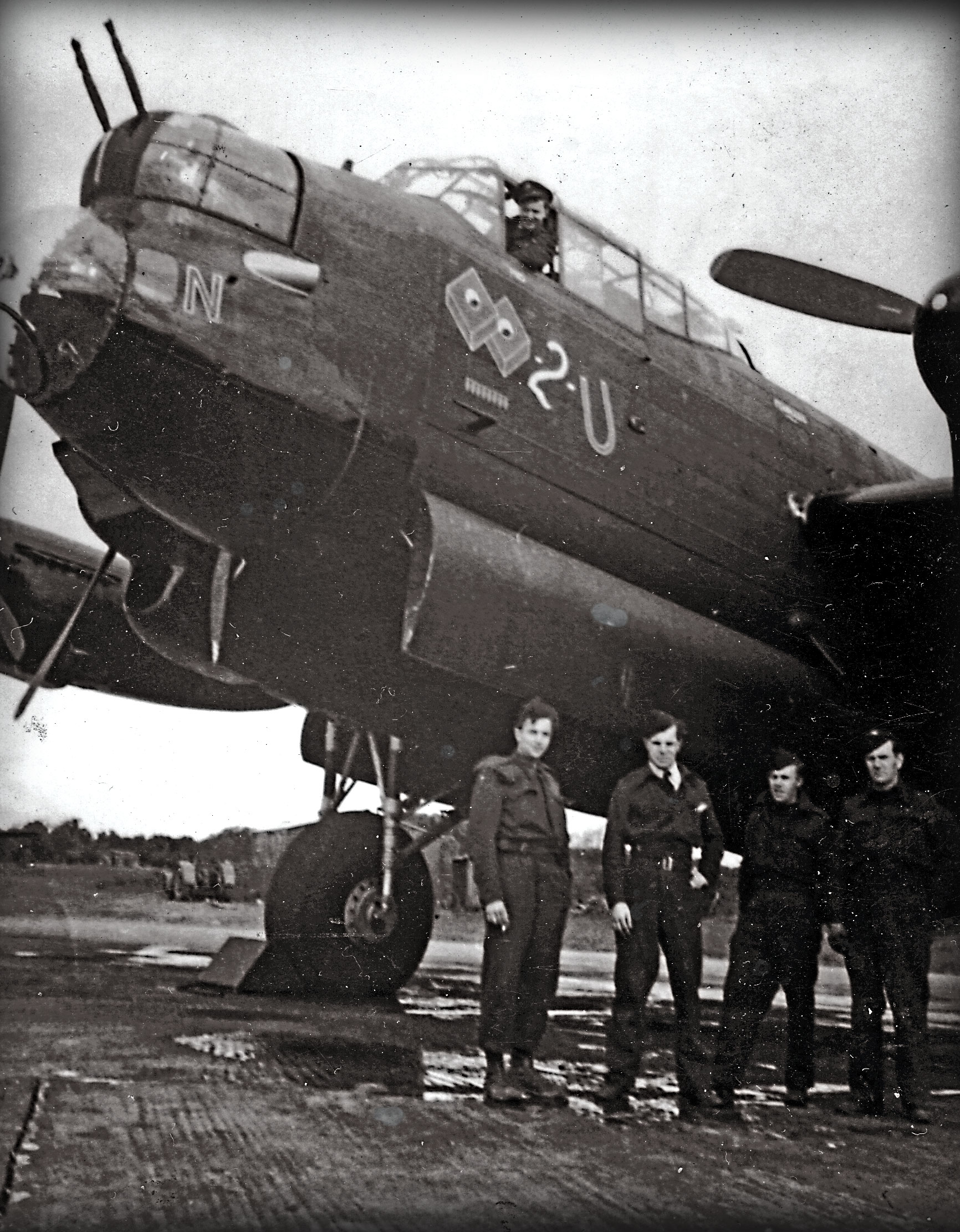 Widdicombe and crew with their Lancaster, Nuts To You.
Florence Widdicombe
He had never ventured far from his father’s farm in Foxwarren. A year later, he found himself based at Middleton St. George, in Yorkshire near the Scottish border. “It was exciting,” he said. “Every day was something new for us.”

Almost too small for a Lancaster, he wanted to fly the Mosquito, the wooden, twin-engine de Havilland raider that was renowned for its speed and panache.

It was not to be. He was relegated to primarily nighttime raids in the biggest bomber of the European campaign, capable of delivering a payload in the order of 14,000 pounds, or more than triple that of the American B-17’s.

He flew aircraft VR-N (N-for-Nance), which was actually three planes. One version was downed while he and his crew were on leave; the other so badly damaged it was taken out of service. “I was away both times. I kind of had a charmed life.”

As a surprise, Widdicombe’s ground crew added some nose art: two lug nuts followed by 2-U. It was a visual pun but fell short of the pinups many crews preferred. “It wasn’t very attractive.” 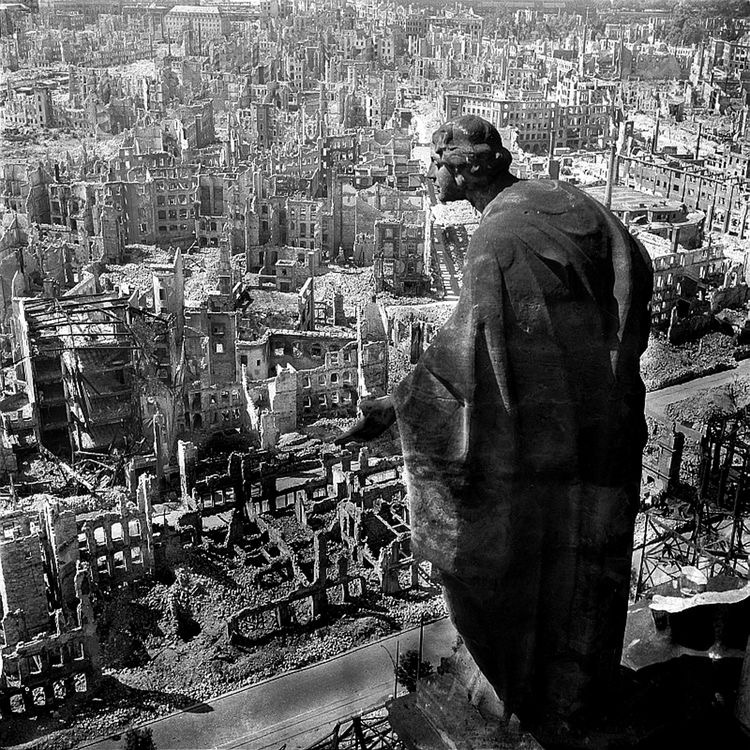 August Schreitmüller’s sandstone sculpture Die Gute (Goodness) on Dresden’s Rathaustrum, or town hall, once overlooked a city known as ‘Florence-on-the-Elbe.’ Photographer Richard Peter, who documented Europe’s ruins after the war, took the picture from the tower looking south.
Richard Peter/Wikimedia
The Lancs had no fighter escorts, except later on during rare daytime raids when they were accompanied by P-51 Mustangs. The Mustangs had drop tanks filled with additional fuel that enabled them to fly all the way to Germany and back.

Dresden in February 1945 was Widdicombe’s biggest—nearly 1,000 bombers in a stream hundreds of kilometres long and dozens wide. The B-17s followed the next day. The onslaught continued for two more days and nights, igniting and feeding firestorms that consumed the city and incinerated between 35,000 and 135,000 of its residents, including many refugees escaping the Soviet advance. The figures have been disputed, with some estimates as low as 5,000 dead.

Where he was in the bomber stream, Widdicombe has no idea, but “there was nothing but smoke and fire when I was there.” No part of Dresden was spared.

Forming up and flying in huge formations at night, in all kinds of weather, could be almost as harrowing as making the target itself, where the searchlights, flak and fighters of all kinds awaited.

“But how far away were you? That was something else.”

The bomber crews liked cloud, which Widdicombe called their “comfort blanket.” It was trickier forming up but more difficult for the opposition to find them. And there was plenty of it, flying as they did over the North Sea, especially in winter.

Difficult as it was, flying missions was better than the waiting in between, biding time, mourning lost friends, missing home, not knowing where or when the next raid would take place. Once airborne, Widdicombe’s anxieties would slip away.

On a good-sized raid, 300 aircraft from multiple bases would link up at a designated rally point, with just 20 minutes passing from the time the first bombs dropped to the last. The more compact a formation, the more efficient the raid.

“There was nothing regular about it,” he said of the missions. “Everything was different. It was like a game of chess, really. If you were going to Berlin, you didn’t go straight to Berlin; you went over there to get away from that fighter group, then you’d come over here and head for another city and the fighters would go over there. Sometimes it didn’t work the way it was supposed to.”

In 23 missions, his aircraft was hit many times by flak—an exploding shell intended to pepper aircraft with crippling shrapnel, like a shotgun shell. “You’d hear it rattling off the fuselage.” Only once, however, did flak inflict serious damage to his plane.

“It hit me in the prop,” Widdicombe recalled. “It was the port inner. I didn’t want to feather it because I still had a load on. I got to the target and I’d run it too long; it was vibrating. The engine started heating up, I tried to feather it, and it would not work. Finally the engine seized and it stopped, but the prop wasn’t feathered so I had to push it all the way home, against the [air] stream.”

By feathering, a pilot turns the blades of a variable-pitch propeller so that their mid-to-outer section is aligned with the airflow and they create minimal resistance, or drag.

“We had to land short, south of London. We had run out of fuel. There was an emergency field right at the closest piece of land they could get. We got in quite nicely.” Even then, visibility was at a minimum and ground crew lit oil drums lining the runway to lift the heavy fog in a bubble about 300 feet high. The technique was called FIDO, for “fog, intensive dispersal of.”

The Lancaster with her four Rolls Royce Merlin engines was “a treat to fly,” he said. Especially given the loads she carried. “As far as I was concerned, it was overloaded every time we took off. But it behaved well, it really did.”

By 1945, enemy resistance was failing. The Germans were running out of fuel and their fighters couldn’t stay up long. He encountered Me-262s, the first jets in combat. But they never gave him trouble. The pilots, he said, were inexperienced.

“They (the jets) were too new for them and their experienced pilots were getting scarce by that time.” Good thing because, with a top speed of almost 900 kilometres an hour, gunners couldn’t rotate their turrets fast enough to track them.

“We got to know one another pretty well before it was over.”

They switched out a handful of times to fly with new pilots on their first missions, always coming back to VR-N. All flew home in July 1945, expecting to be redeployed to the Pacific. The plan was abandoned after the Japanese surrendered in August. 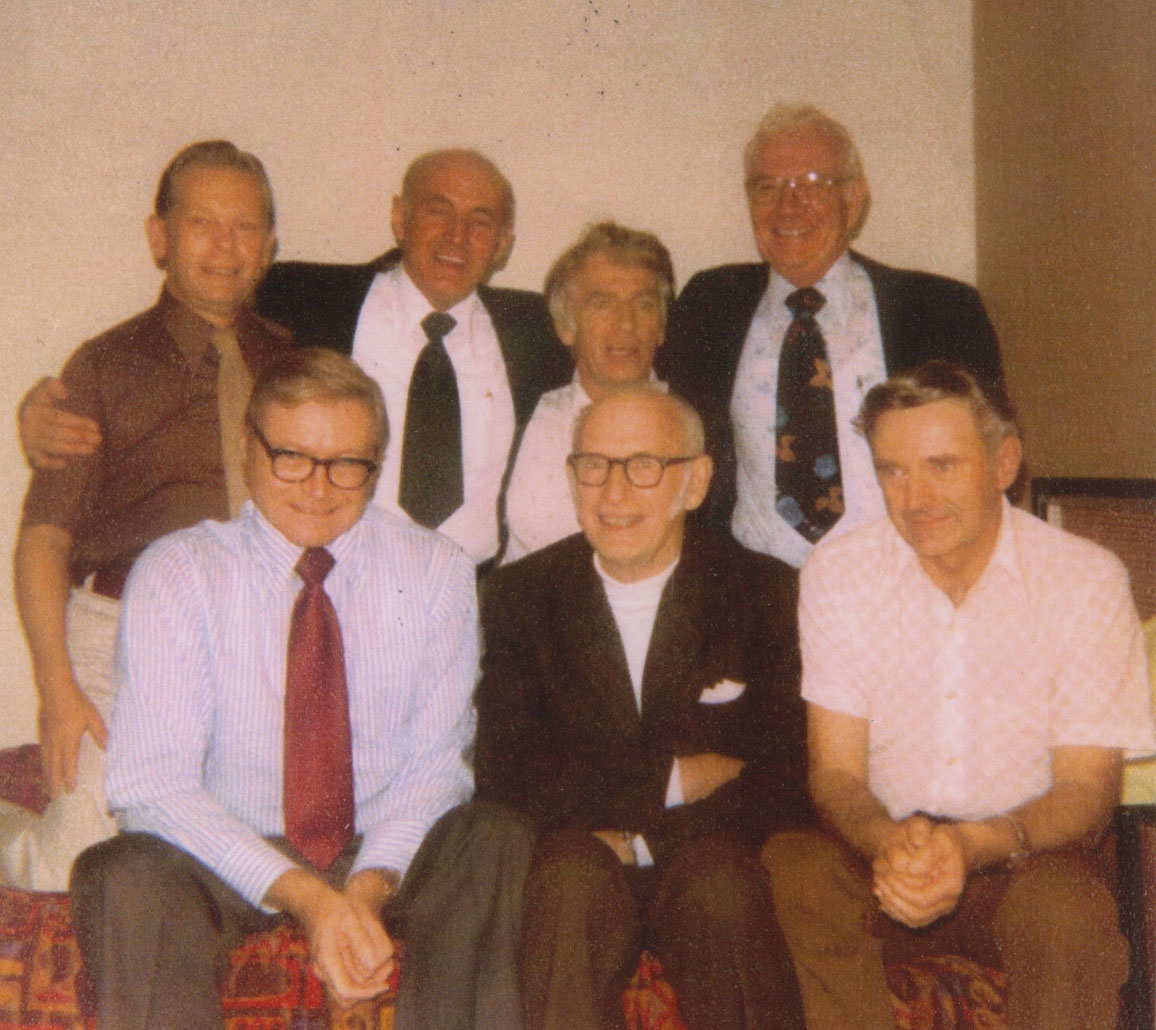 The Lancaster crew in 1977.
Penny Menzies
Widdicombe arrived back at the family farm just in time for harvest. “It was combining time and I got home and had to run a combine.”

He has farmed ever since. The last version of his Lancaster VR-N ended up in Dartmouth, N.S., and was eventually sold for scrap.

The seven crewmates got together regularly after the war, always keeping in touch. The last of the others died in 2015, leaving only Widdicombe.

He didn’t pilot an aircraft after the war until he went up in July with a museum flyer, Peter Moodie, and took the stick of a Tiger Moth for the first time in 77 years.

“He flew the airplane as if he had been flying it last week,” Moodie said. “There are other current pilots who flew on their rides, and Jack did better.”

Widdicombe demurred: “I think I need some brushing up.”