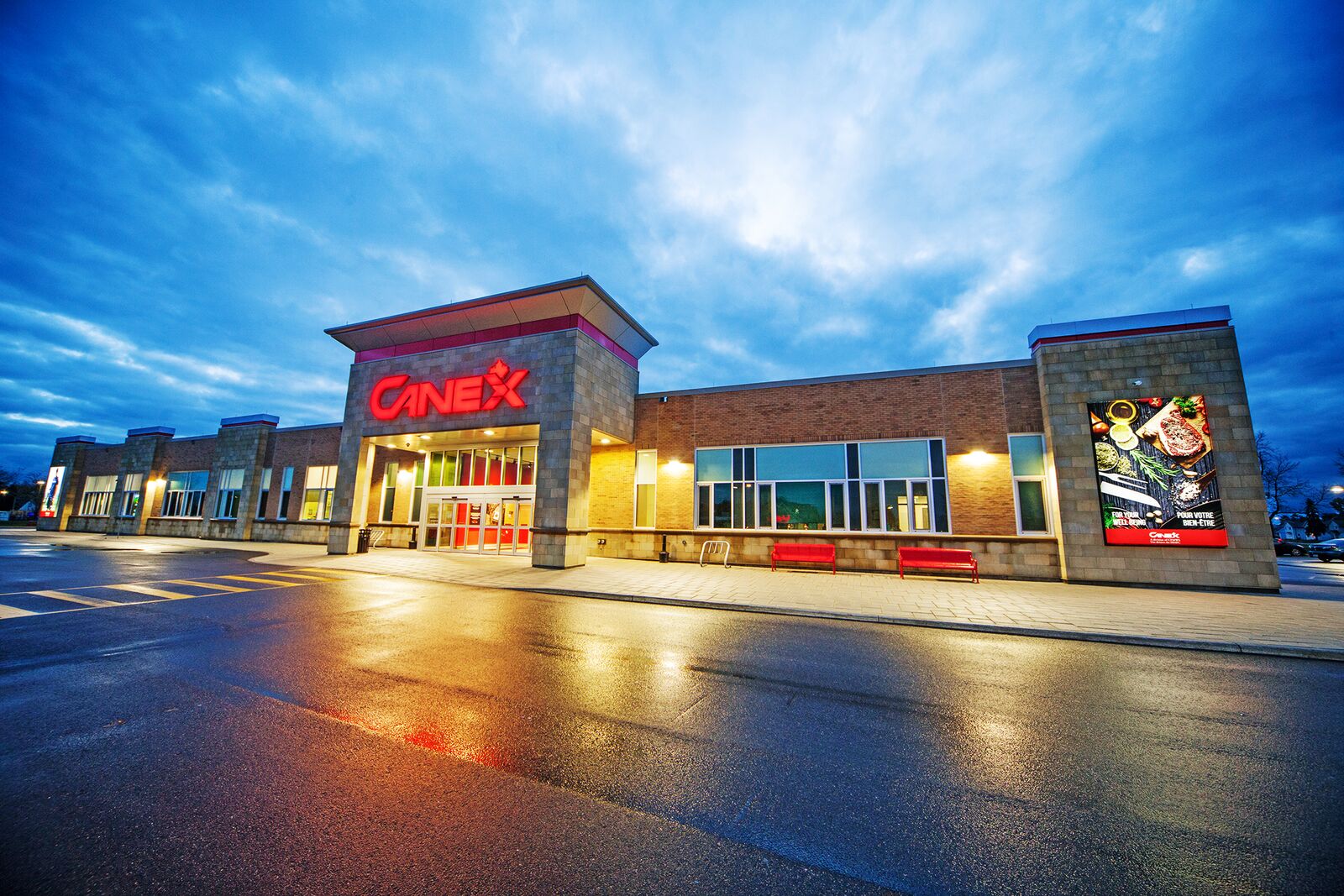 Back in the day, some 40-plus years ago, the CANEX store was a big deal to Brian Hynes and all the military brats with whom he hung out.

Born the son of an air force navigator based at Comox, B.C., Hynes saw his share of small towns and remote postings, but he never wanted for anything—the CANEX had it all.

“It was a huge deal,” said Hynes, now a major with an eventful 35-year army career. “It was the only mall in town. It was the place to shop.”

Whether it was for hot chocolate and French fries or grocery shopping with his mom on Thursdays, going to the CANEX was an event, an expedition that was part chore, part adventure, a mission of discovery and social encounter. Not to mention the CANEX was convenient and stocked with good buys.

In those days, the Hynes family knew the butcher by name, and he knew them.

“The closest grocery store was a half-hour, 45-minute drive away, and you wouldn’t have the same selection,” said Hynes. “It was definitely the place to go.”

The CANEX, run by Canadian Forces Morale and Welfare Services, is 50 years old.

By turns supermarket, clothier, convenience store, lunch counter, hardware store, furniture shop and electronics mecca, CANEX was for years all things to all people in uniform. 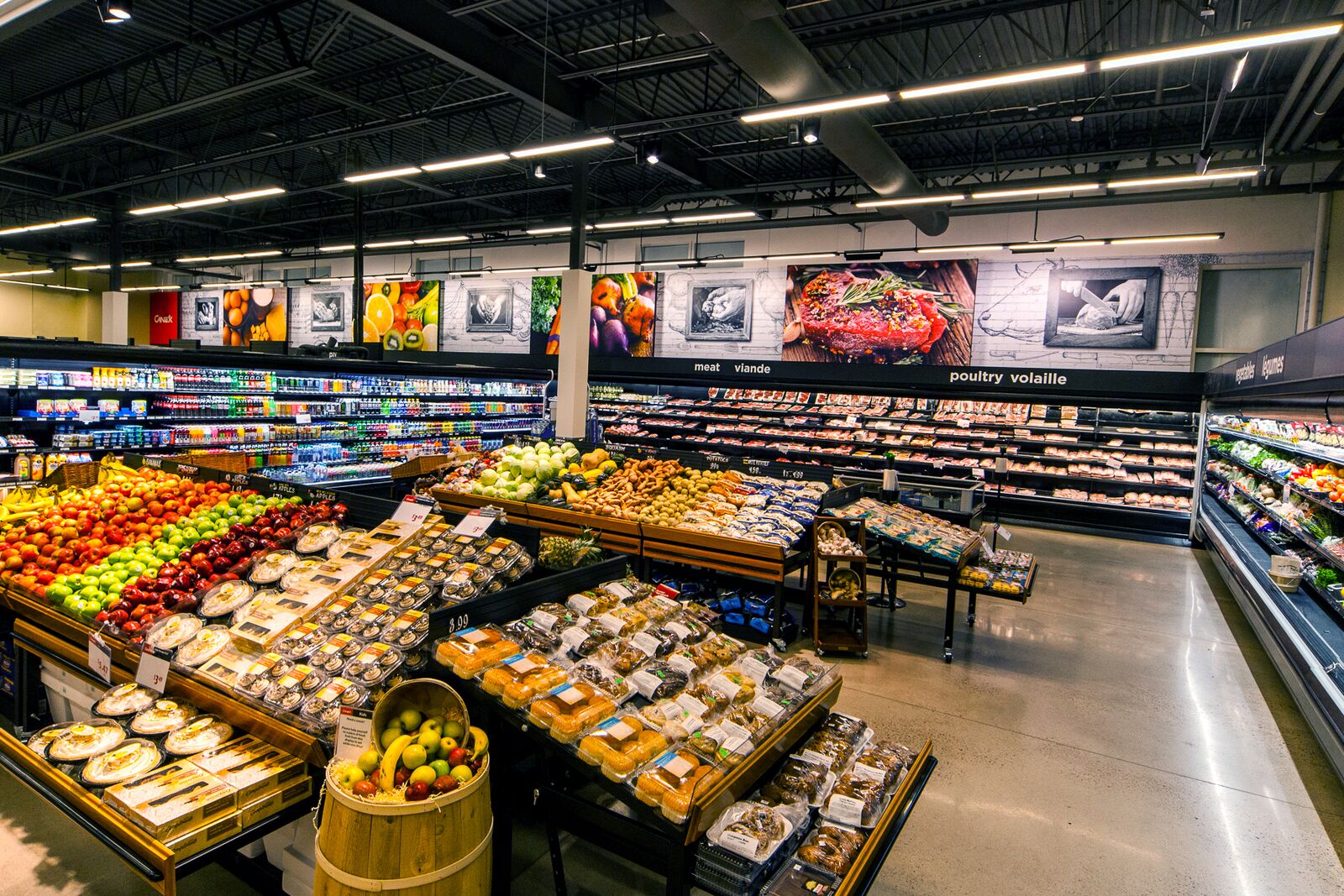 The grocery section inside the CANEX in Petawawa, Ont.
Design Source Guide
First opened in 1968 to provide goods and services to the defence community, CANEX now operates 35 retail outlets on bases and other military sites across Canada, as well as an e-commerce store, CANEX.ca, where folks in uniform can buy everything from TVs to Fitbits, camping gear to military kit.

The stores employ 500 staff across the country, many of them spouses, partners or dependents of serving military. 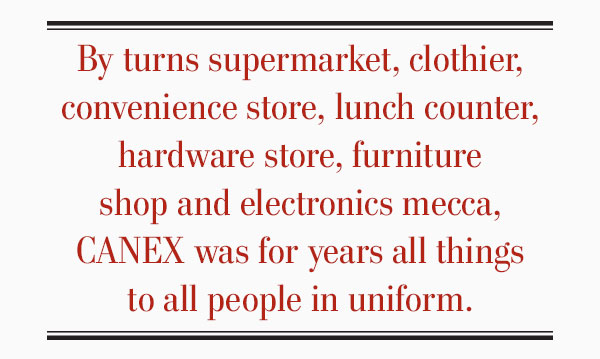 More than $30 million in proceeds from CANEX sales have been reinvested in local base, wing and unit funds in the last 10 years, supporting a variety of social, sports and recreational programs, including libraries, skating, curling and swimming.

The anniversary warranted the Department of National Defence to issue a news release, complete with a laudatory statement from the Chief of the Defence Staff, General Jonathan Vance. 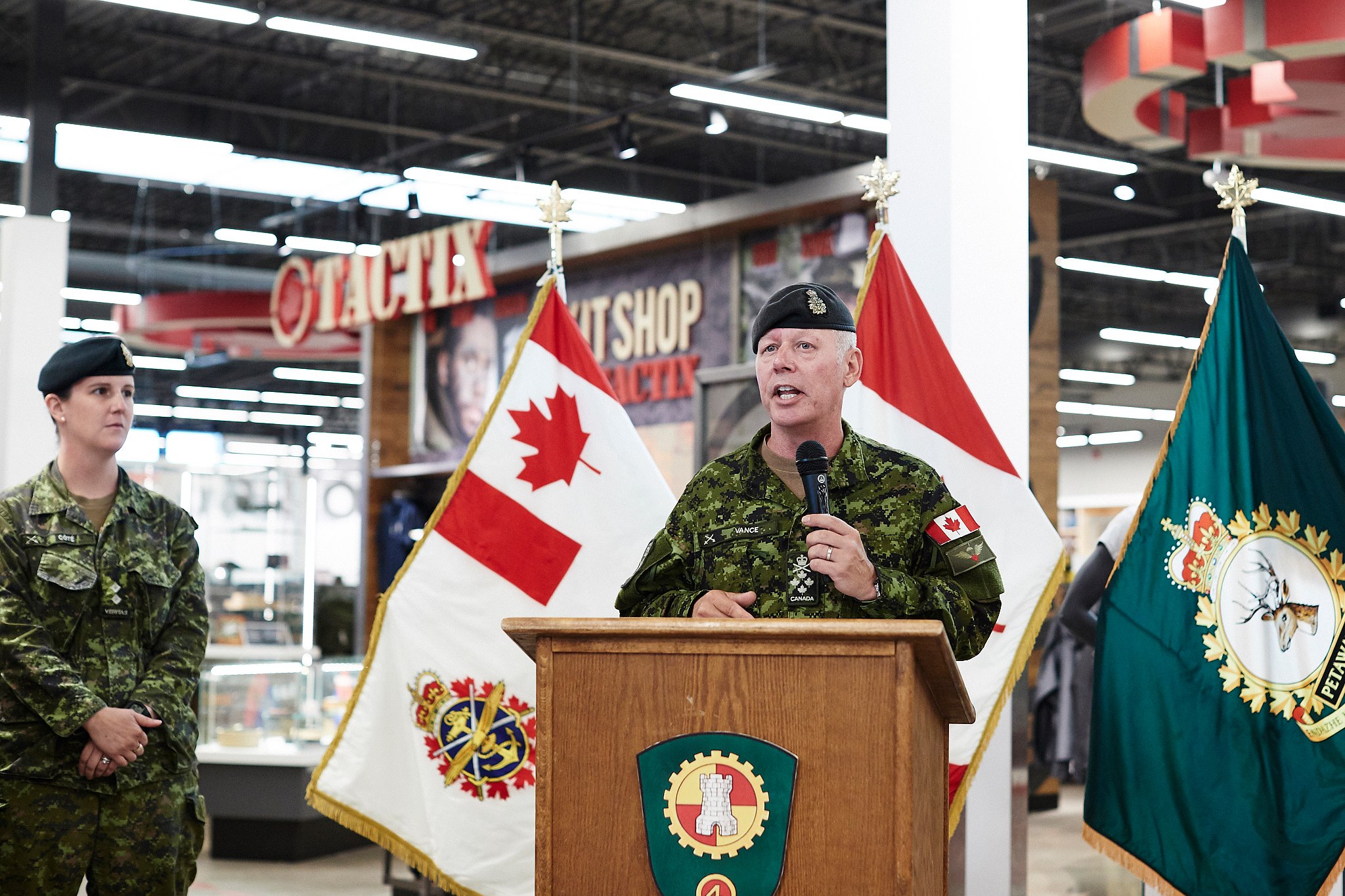 Last week, Chief of the Defence Staff General Jonathan Vance visited the flagship store at Garrison Petawawa to celebrate CANEX’s 50th anniversary.
CANEX FACEBOOK
“For generations, CANEX has been a staple of our military support system,” said Vance. “They’ve been with us through some of our most important missions, and I’m confident they’ll continue being a valuable partner well into the future.”

Back when Hynes was a kid, CANEX operated on a kind of inverse business model—the bigger stores were in the smallest places. Exclusive to military personnel, they were subsidized and prices were more than competitive with off-base, civilian retail outlets. That caused some consternation among civilians who were expected to tolerate the military presence with limited benefit.

For the troops, however, CANEX was like a benevolent company store. They could buy products—sometimes at bargain-basement prices—put them on a tab, arrange low-interest or interest-free payment plans by direct deposit, all without the hassles of main-street traffic, crowded aisles or grumpy bankers. 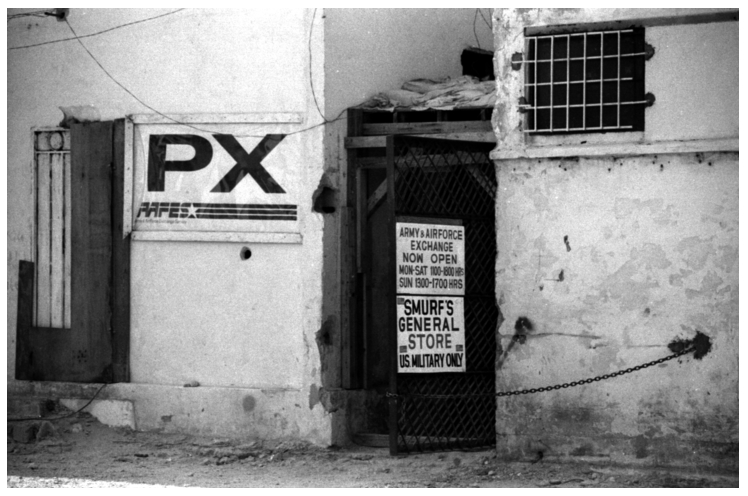 A Post Exchange was located at the old international airport in Mogadishu, Somalia, in January 1994.
Wikimedia
These days, many of the communities that have hosted military bases for generations—like Greenwood, N.S.—have grown, and malls and a variety of shops have grown with them. Soldiers, sailors and air force personnel are less reliant on the CANEX, and prices are less competitive.

“The advantage pretty much faded away,” said Hynes, who grew up in areas as disparate as Comox, Greenwood, Ottawa, Toronto, Montreal, the U.K. and Texas.

The CANEX is open to non-military, though civilians don’t get the cards that enable service men and women to accumulate purchase points and take advantage of special deals and offers.

On deployments, Canadian troops flock to the American PX (post exchange), where selection can be better and prices, even at current exchange rates, are tempting.

The PX and its various service equivalents are part of “a totally different social culture,” said Hynes, who is posted to the army simulation centre in Kingston, Ont.

“Prices are lower; the selection is extremely broad-range, especially in Europe. The American mindset is totally different than ours.”

A CANEX in Edmonton cannot compete with city shopping, he said. The same goes for those in any other major Canadian centre. But go to any major American base and, not only are the PXs stocked with better buys than on Civvie Street, they are in competition with the shops of other military services, like the air force (BX, or base exchange) and the Marines (MCX, or Marine Corps Exchange).

Still, in Kabul, CANEX ran a popular convenience store at Camp Julien where craved-for Gatorade and small cigars were dirt-cheap—with the emphasis on “dirt.”

Bottled products were inevitably shrouded in layers of dust and tobacco goods were crispy-dry from months in storage at hot waypoints like Dubai.

Not long after the Americans took up residence at the air base in Bagram, north of Kabul, in 2002, International Security Assistance Force troops of all nationalities lined up for hours each morning waiting for the new PX to open. Inside the tiny shop staff were stocking shelves with the latest shipments of CDs and players, shaving products, clothing and other items. They would be sold out inside an hour and dozens of disgruntled troops would inevitably be turned away.

It was not long before Bagram was a home away from home for the Americans, complete with Burger King, Popeyes chicken, pizzerias, a Thai restaurant, Dairy Queen and coffee shops.

Along with most of the amenities of a good-sized town, the base at Kandahar in southern Afghanistan, with its 20,000 residents, housed a Tim Hortons, run by the Canadian Forces Welfare and Morale Services, which served four million cups of coffee, three million doughnuts and half-million iced cappuccinos and bagels before it closed in 2011.