Nine pilots are seated around the table in a small boardroom at the Gatineau-Ottawa Executive Airport, 18 kilometres from Parliament Hill as the Snowbird flies.

The room is a sea of Canadian red, for these are the iconic Canadian Forces Snowbirds, 431 Air Demonstration Squadron, and this is Canada Day 2018.

Major Denis Bandet of Regina, team leader or The Boss, has just chaired a 20-minute briefing on their next flight—for 36,000 party-goers on Parliament Hill. Their commanding officer, Lieutenant-Colonel Mike French of Langley, B.C., has the floor.

His message is brief and to the point: “About the most Canadian thing you can do is do a split over Parliament Hill on Canada Day. Enjoy it.”

Indeed, is there anything more Canadian than the Snowbirds? Eleven primary pilots on three-year secondments from virtually every corner of the country—Tadoussac, Que., and West Vancouver, B.C.; Moncton, N.B., and Canmore, Alta.

And that’s just the pilots.

There are also crew from Cuba, Britain, Germany, South Korea and the Philippines.

The Snowbirds fly all over North America. They’re considered a top draw at air shows everywhere and the face of Canada to many an aviation buff.

As a member of 409 Tactical Fighter Squadron out of Cold Lake, Alta., Bandet has flown CF-18s in the Middle East. But for the 21-year air force veteran on his second stint with the team, flying at a groundspeed of 288 knots (more than 530 kilometres per hour) 800 feet over Canada’s capital on the country’s birthday is always special.

They are confronted by a sea of red as they pass over the Parliament Buildings at precisely 12:12 p.m. Their ground co-ordinators pipe the sound of the crowd through to the aircrews in real time.

“It’s a tremendous feeling, a huge honour to be able to lead this team and be able to do this on Canada Day,” said Bandet. 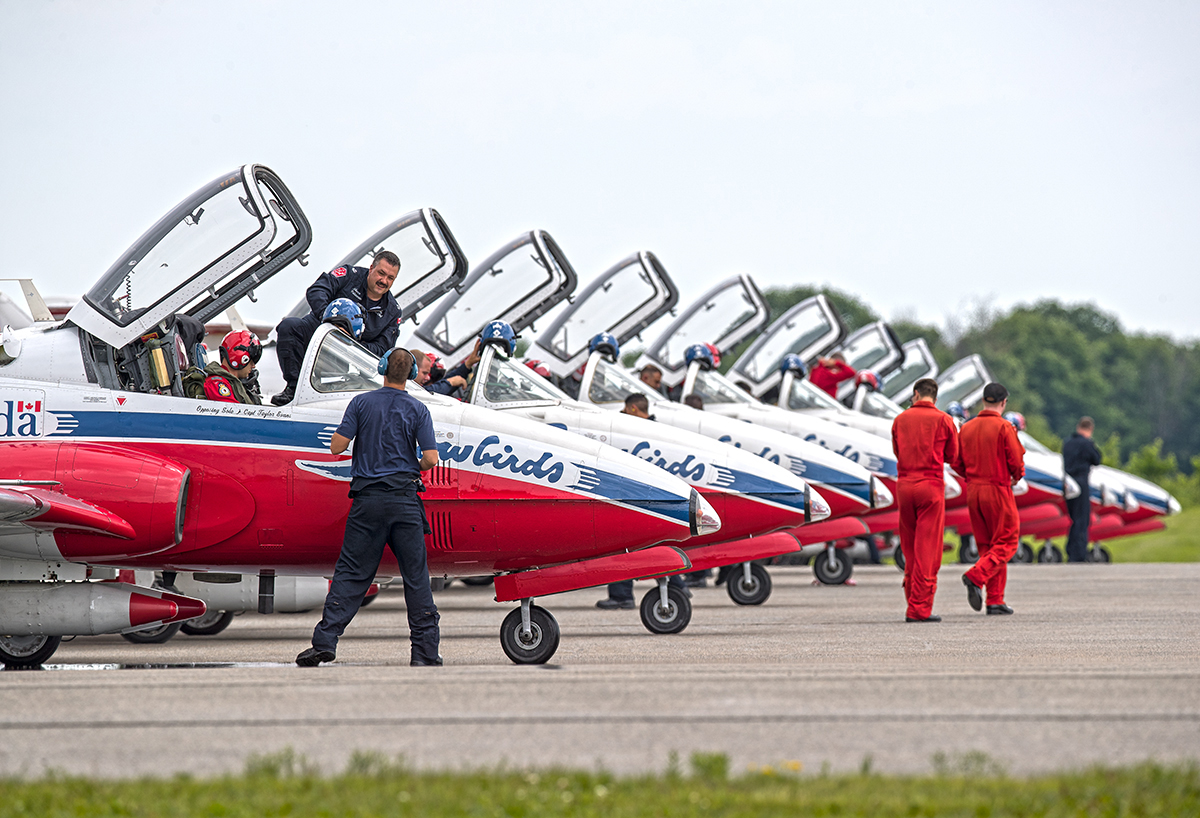 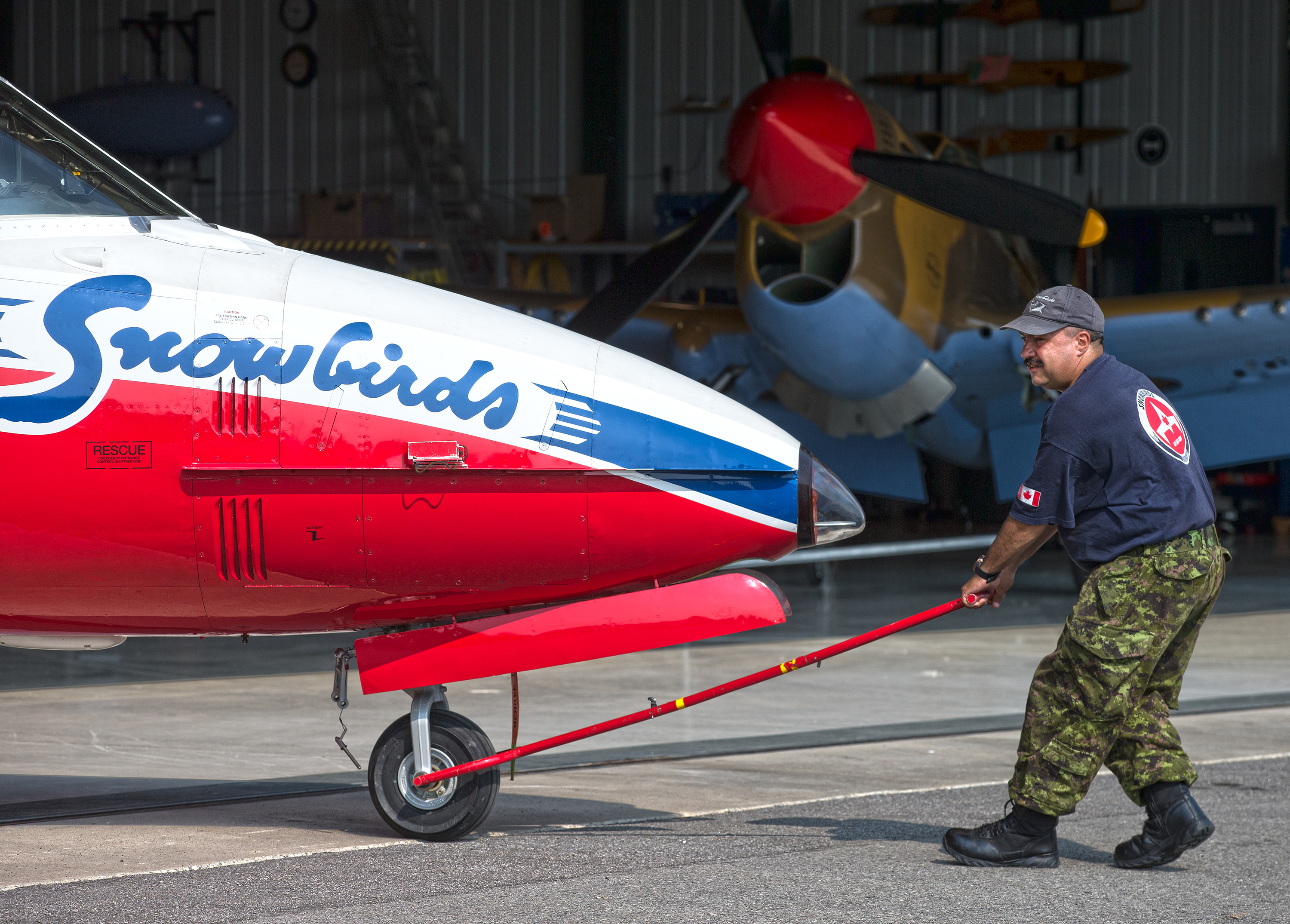 With a P-40 Kittyhawk warbird in the background, Master Corporal Shawn Falzarano, the team’s deputy crew chief, pulls one of the Snowbirds’ CT-114 Tutor jets from the Vintage Wings of Canada hangar in Gatineau, Que. The Snowbirds stored some planes indoors the night before their Ottawa show to avoid the risk of a lightning strike.
Stephen J. Thorne / Legion Magazine 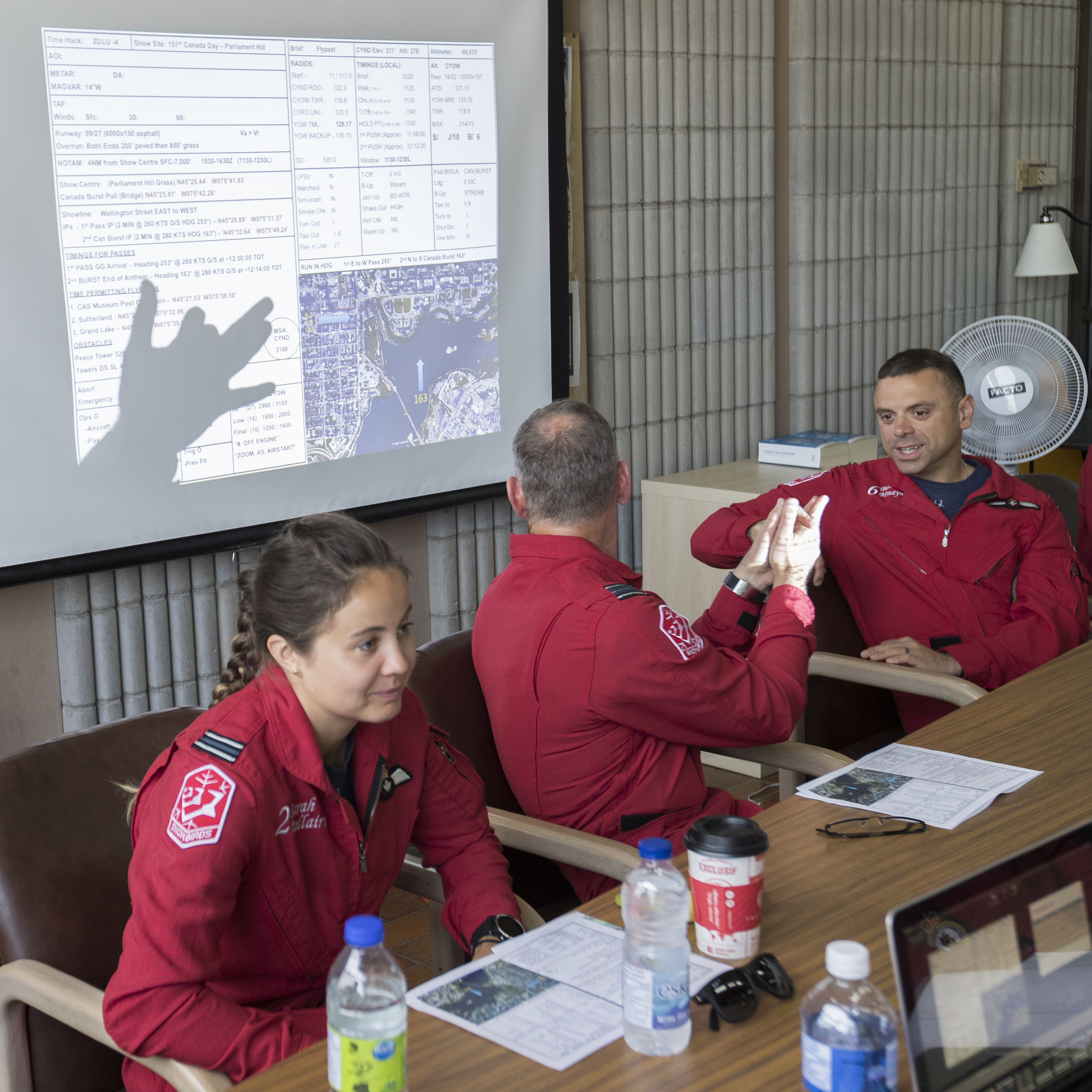 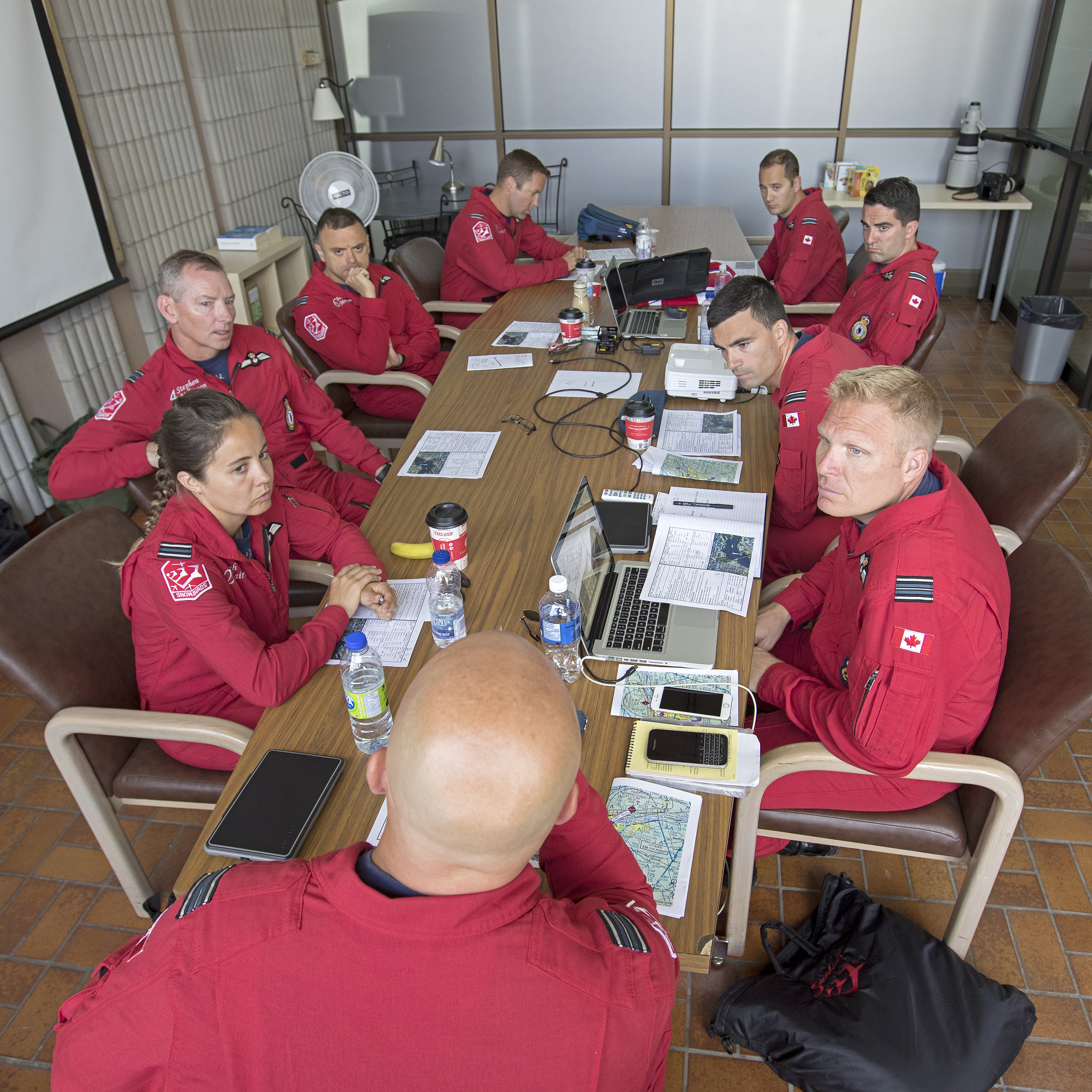 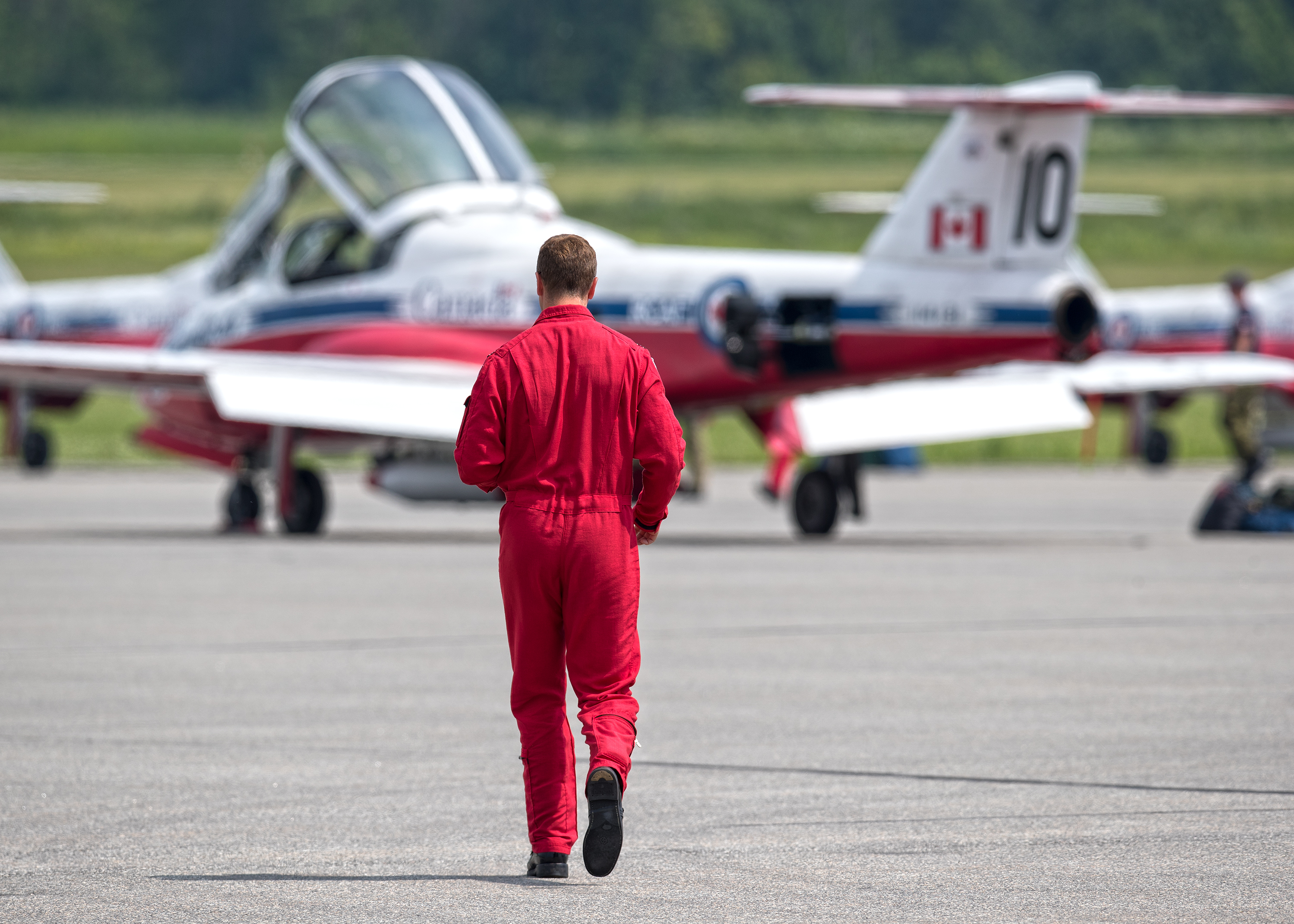 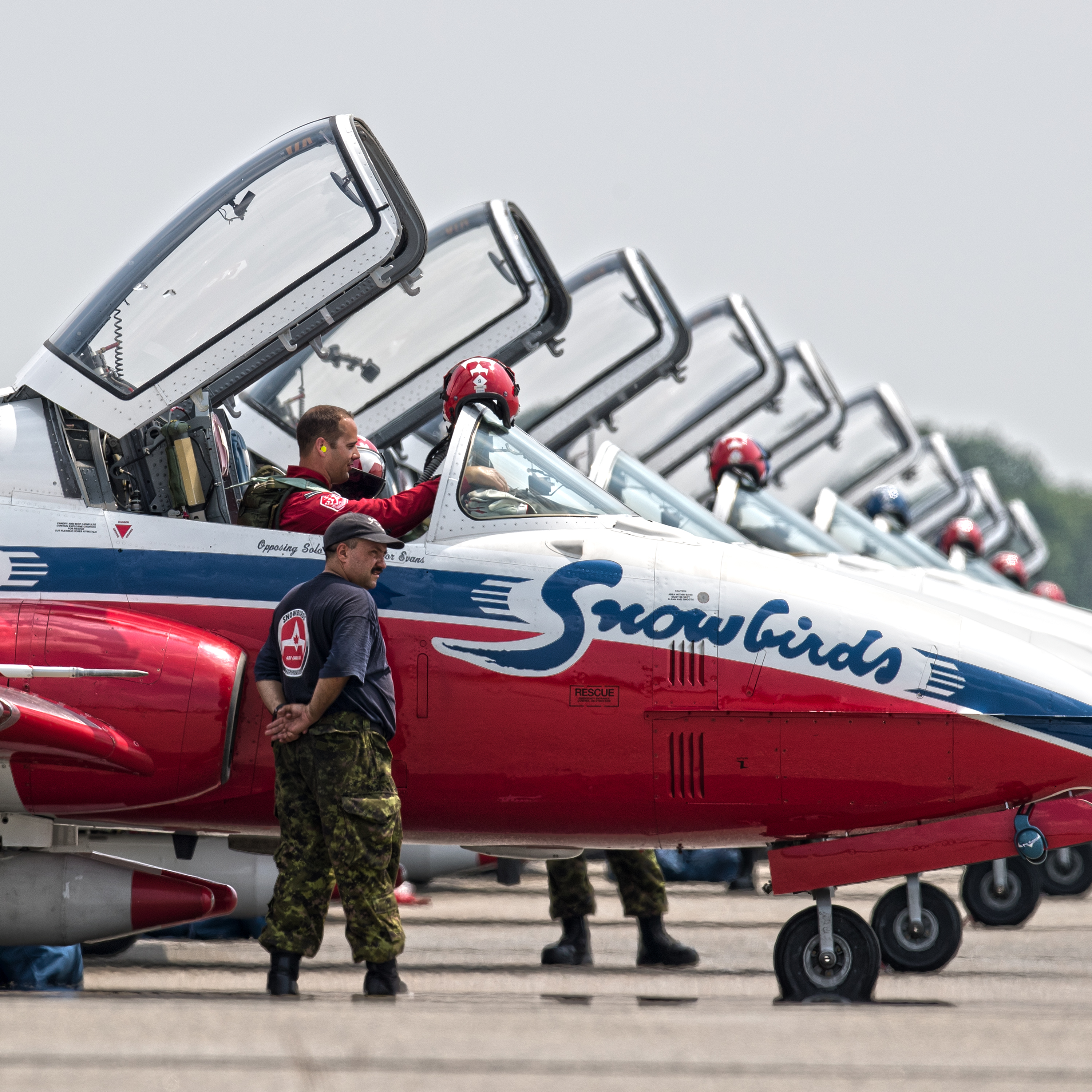 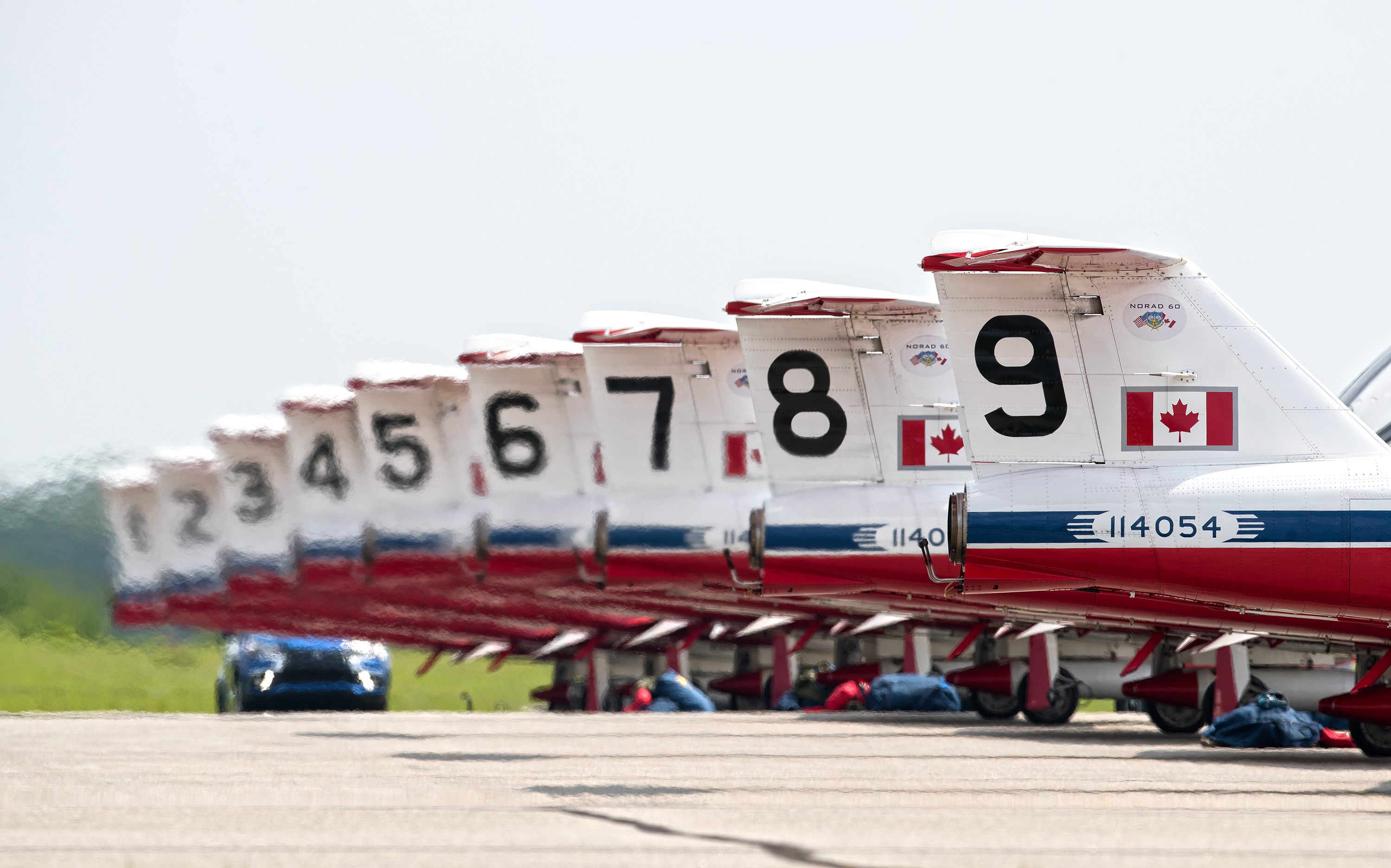 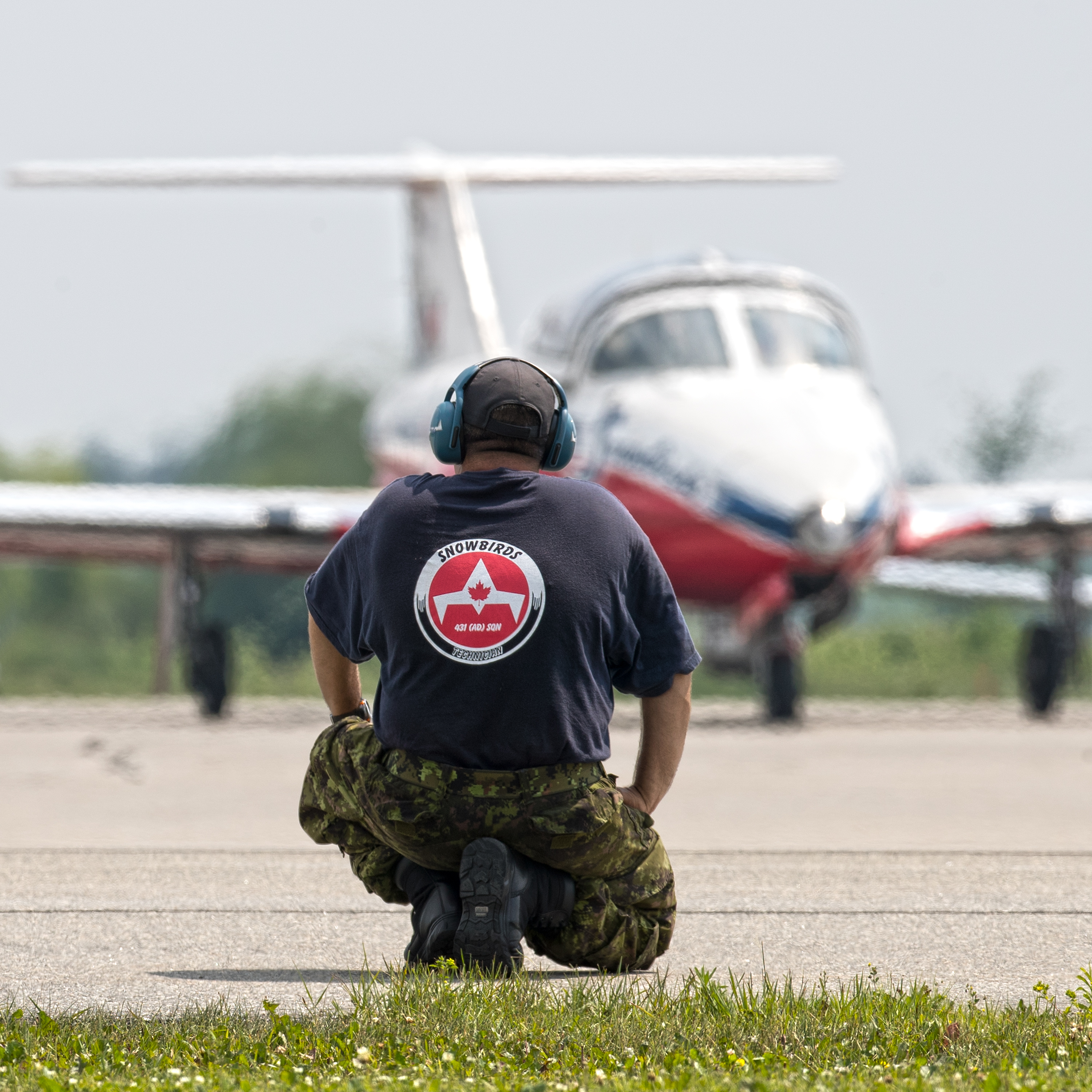 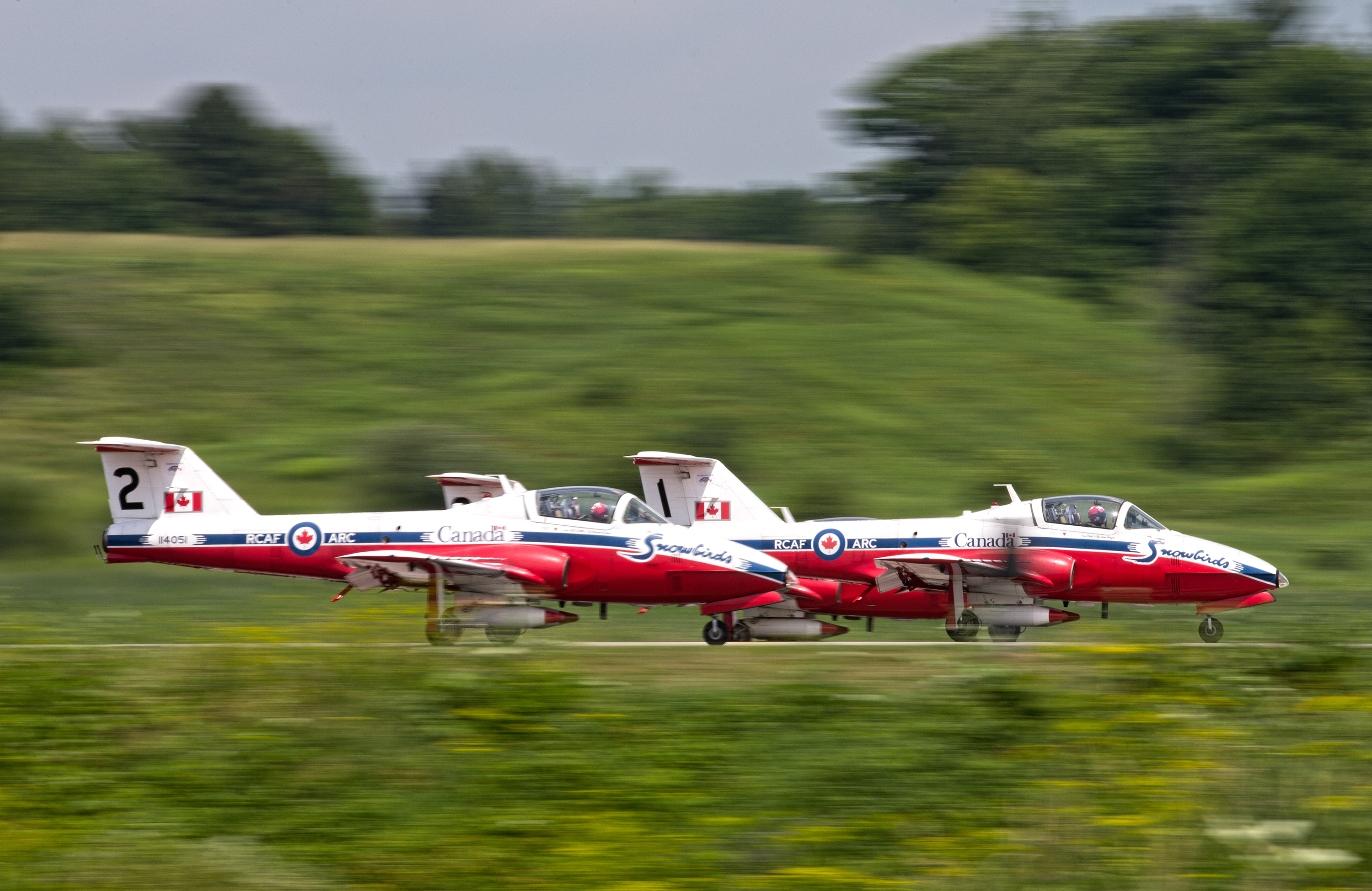 The Snowbirds take off from the Gatineau airport in Quebec en route to their Canada Day performance over Parliament Hill.
Stephen J. Thorne / Legion Magazine 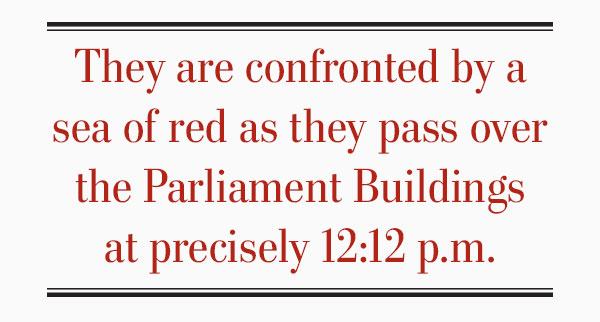 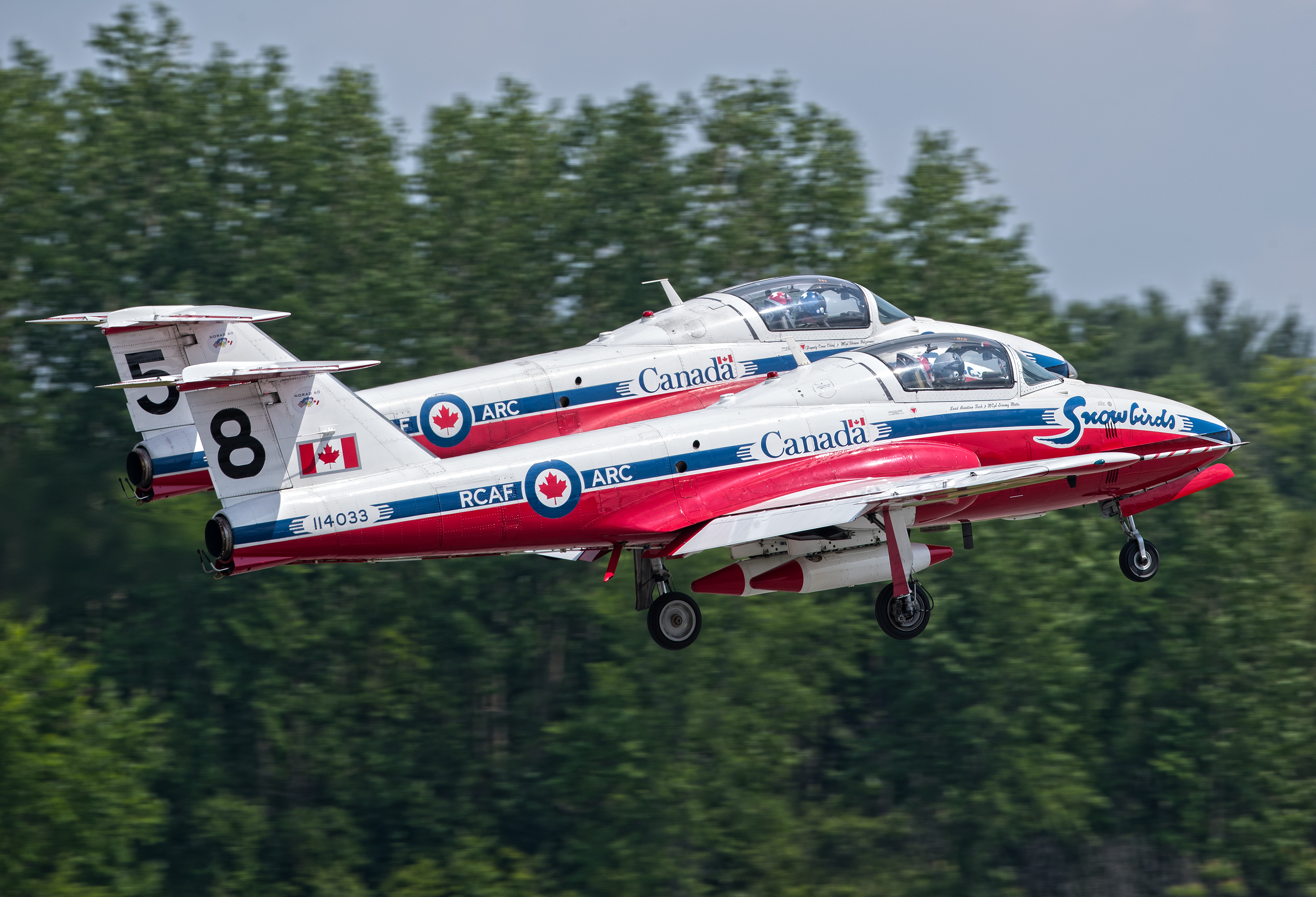 Snowbirds take off in tandem. The common distance between planes during formation flying is about 1.2 metres.
Stephen J. Thorne / Legion Magazine 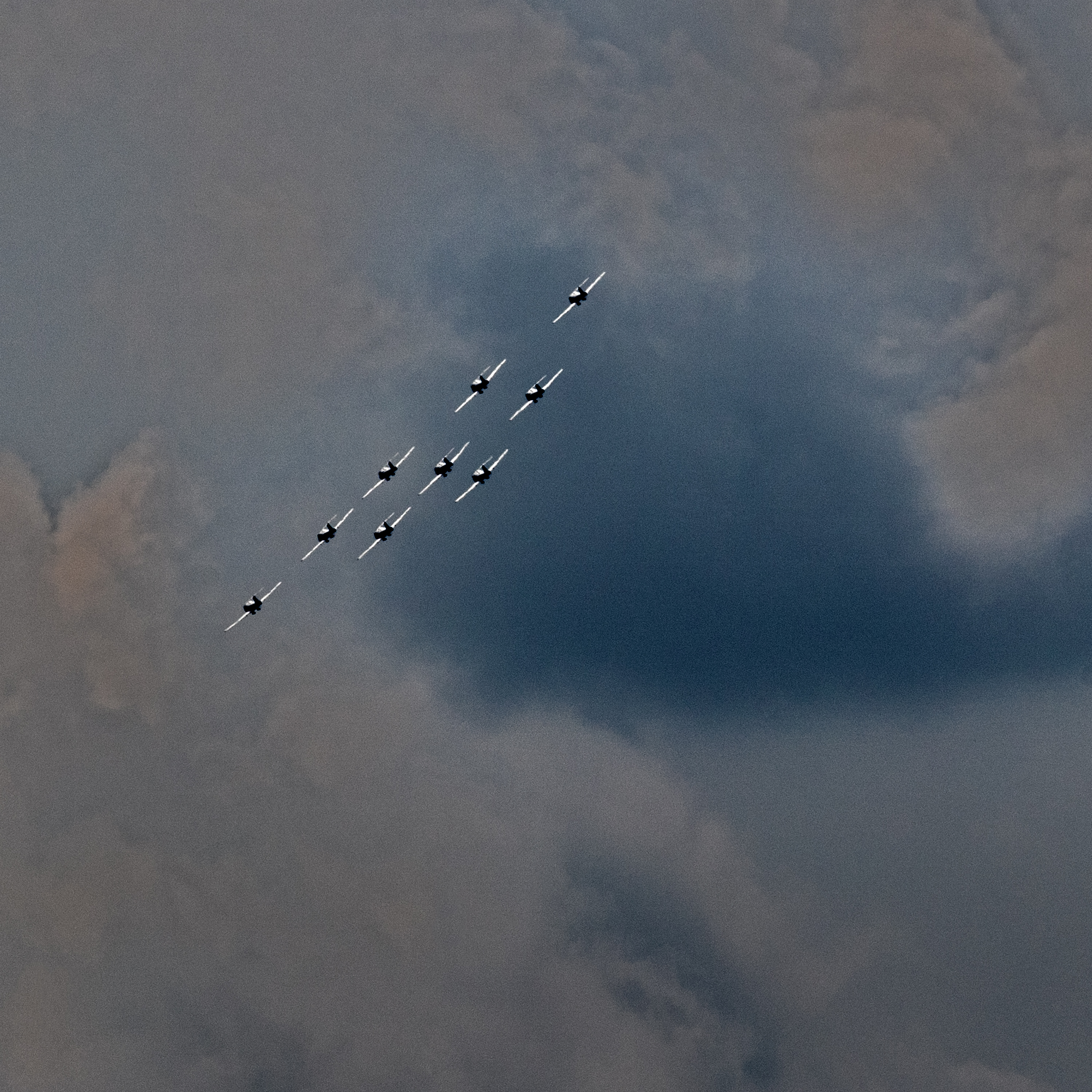 The Canadian Forces Snowbirds aerial demonstration team steer away from their destination as they form up prior to their Canada Day 2018 flight over Parliament Hill. The team will hang back about 15 kilometres away until they’re given a two-minute heads-up before making their pass.
Stephen J. Thorne / Legion Magazine 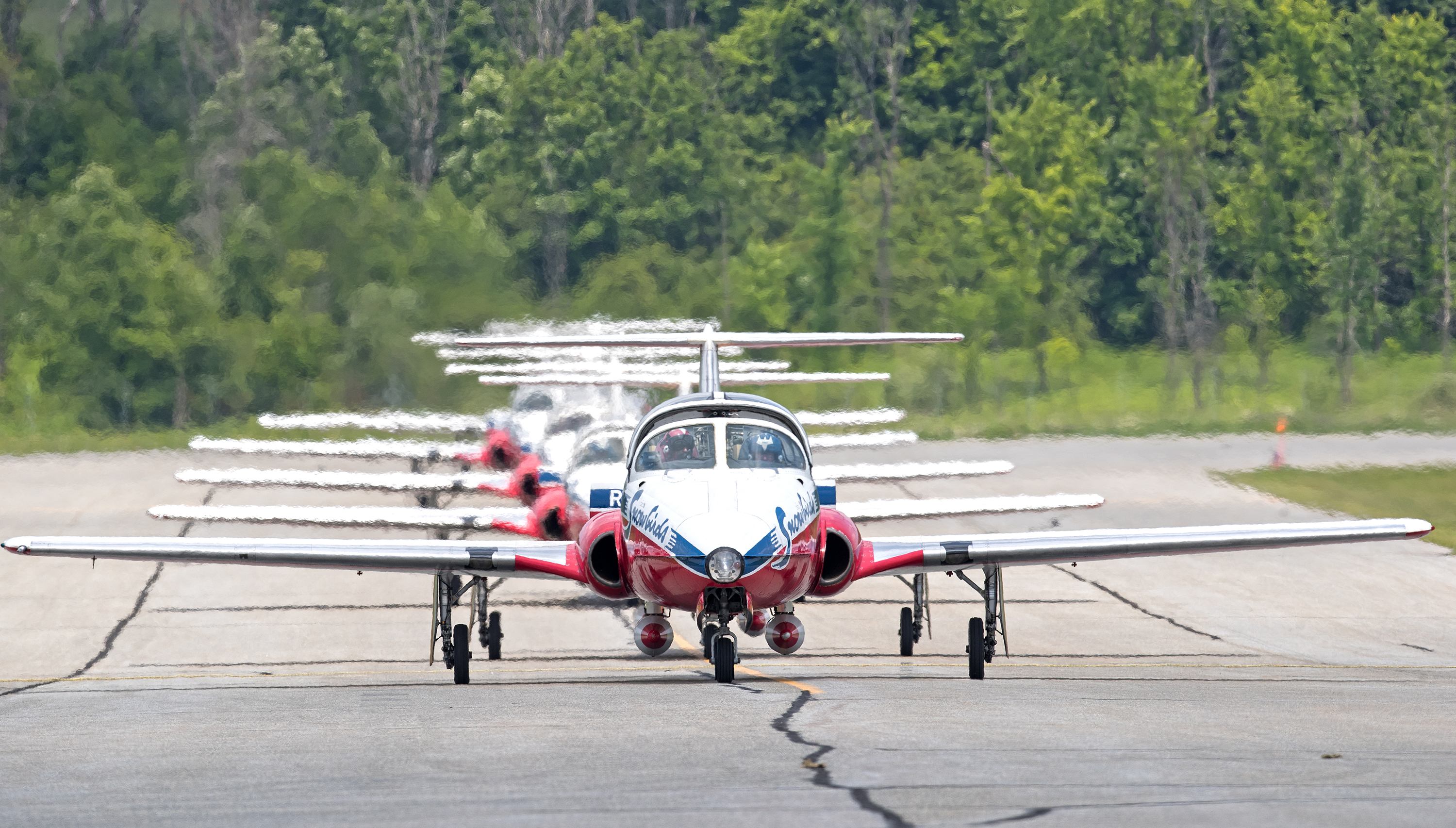 The Snowbirds return to Gatineau airport in Quebec after the first of their two Canada Day flights.
Stephen J. Thorne / Legion Magazine 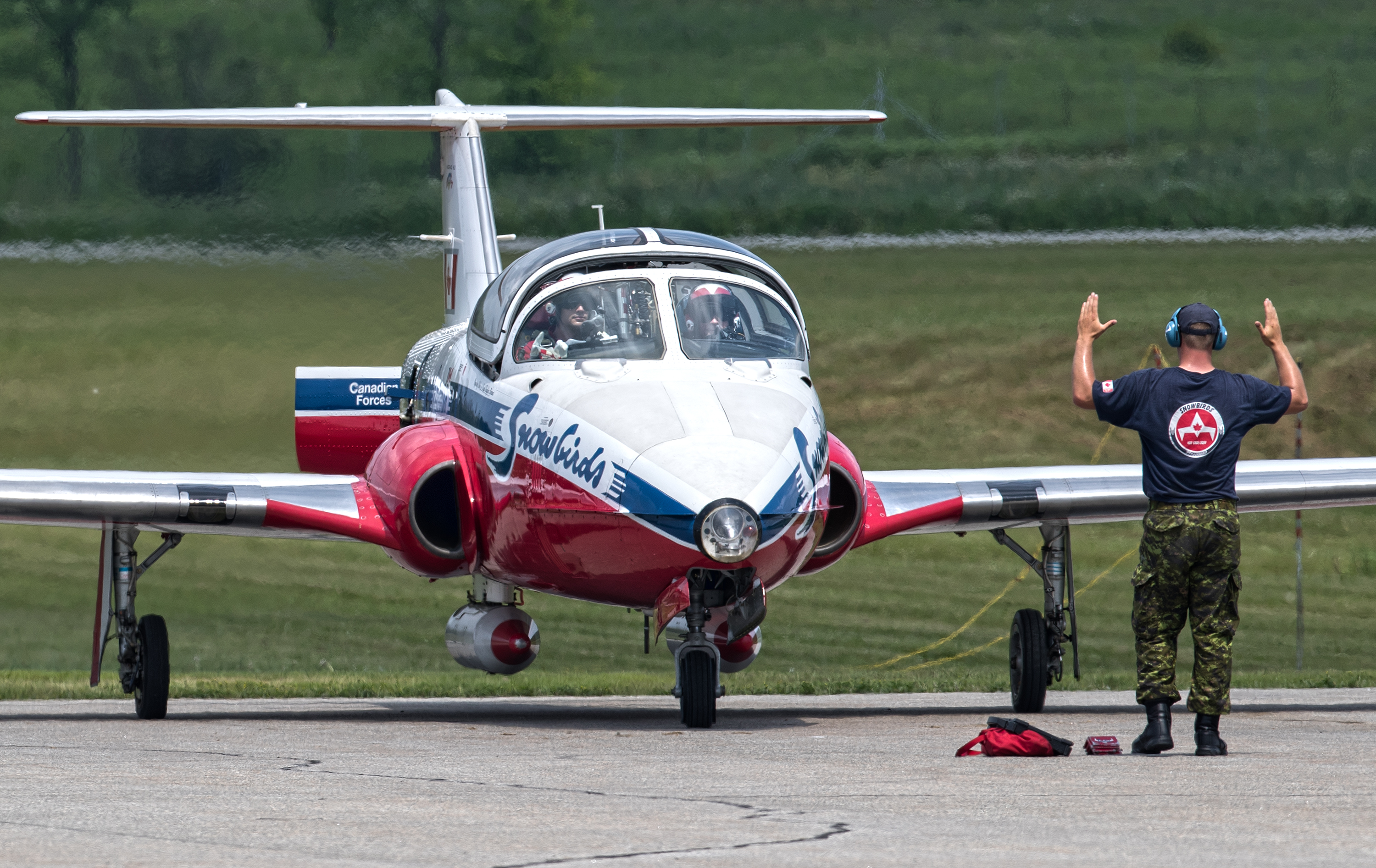 Parking back in Gatineau after their Canada Day flight over Parliament Hill. The Snowbirds would do it all again later in the day, when they would fly a full performance. The team was scheduled to do 60 performances at 40 locations by the time they wrap up their season at home in Moose Jaw, Sask., in mid-October.
Stephen J. Thorne / Legion Magazine