Performance enhancers and the military: The new arms race 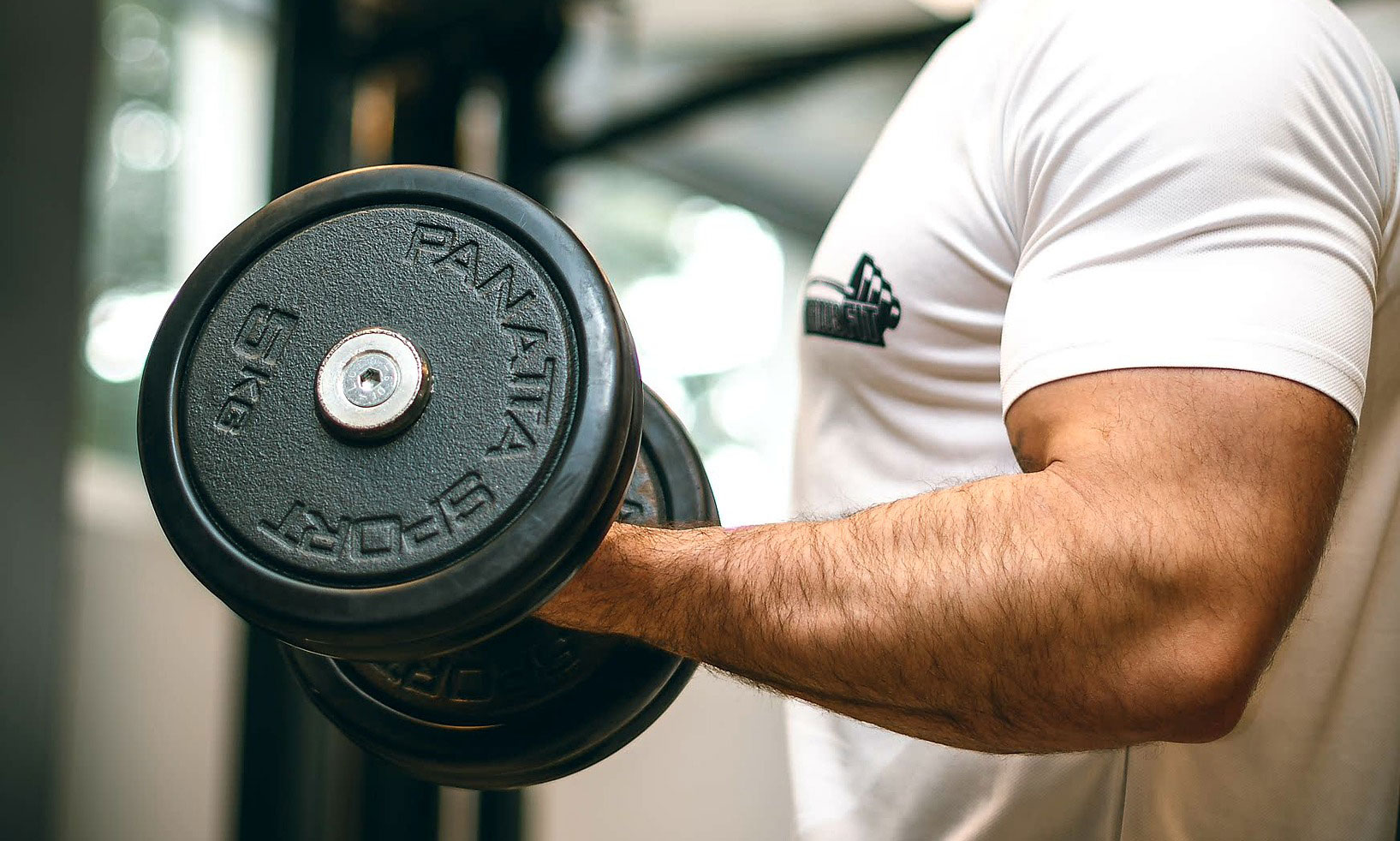 A global arms race is simmering, only this one does not involve robots, nuclear weapons, laser beams or other futuristic gadgets. Rather, these rivals are trying to outdo one another in an age-old quest to extend the limits of the human body.

Militaries around the world, Canada’s included, are testing supplements, stimulants and other performance-enhancing substances. Some—not Canada—are even considering using steroids and hormones to create so-called super-soldiers.

In an age when technology is replacing manpower at virtually every turn, militaries are still looking to make their soldiers go faster, stronger and farther while minimizing side effects that could compromise health and safety, especially on the battlefield.

Like pro sports teams, the military has training regimens, fitness tests and cadres of doctors, trainers, dieticians and consultants on hand to improve and refine traditional methods of performance enhancement, even tailoring them by trade.

But treadmills, ruck marches, weight training and the like can only go so far. Where the sports and military worlds diverge is on the issue of pills and potions.

“If there are…different ways of training, different ways of acquiring performance that are non-material, that’s preferred but in a lot of cases we’ve exhausted those areas,” said Ben Chitty, senior project manager for biomedical, human performance and canine portfolios at the science and technology office of the U.S. Special Operations Command.

In sports, most forms of artificial performance enhancement are banned in attempts to create a “level playing field.” Not so the military.

“In the military, we aren’t interested in a level playing field,” said Dr. Darrell Menard, the Surgeon General’s specialist advisor in sports medicine and part of a team helping the Canadian Armed Forces be more fit and well. “We want a playing field that is actually vertical—you’re down here and we’re up here.

“Militaries all over the world are looking for any advantages that will help increase their chances of success on the battlefield and this includes through the use of performance-enhancing substances.”

Soviet soldiers were given meldonium during the Cold War. The drug was developed in Latvia in 1970 to increase blood flow and boost endurance. Russian tennis star Maria Sharapova recently served a suspension for using it. Soviet troops invading Afghanistan in 1979 were given shots of the drug directly in their necks.

“They were all given meldonium,” inventor Ivar Kalvins said in a 2009 interview. “They themselves were not aware they were using it. No one was being asked if they agreed to it back then.”

Canada’s investigations into the potential benefits of performance-enhancers in the military are more limited.

Their work stops at controlled substances such as anabolic steroids, growth hormone and erythropoietin (EPO), a substance preferred by cyclists to boost red cell production, thus increasing oxygen absorption, reducing fatigue and improving endurance—by up to 54 per cent, according to some studies.

“There are ethical issues that would make it difficult or impossible to get approval to do research on substances such as anabolic steroids, growth hormone and EPO,” Menard said in an interview.

There are legal issues, as well. While steroid possession is legal for personal use in Canada, it is not for manufacture, trafficking, import or export.

So when it comes to personal use of steroids and other controlled substances, Canada’s military employs something like a don’t-ask/don’t-tell policy.

The Canadian military tests members for street drugs like methamphetamine, marijuana, cocaine, heroin, LSD, PCP and ecstasy but not for controlled performance-enhancers.

In anonymous surveys in 2004 and 2008, about one per cent of Canadian military personnel admitted to using anabolic steroids—roughly equivalent to the rate in the general population. Defence has not asked the question since.

“The American armed forces are concerned that anabolic steroid use is increasing and I believe this is likely the same case in the CAF,” said Menard. 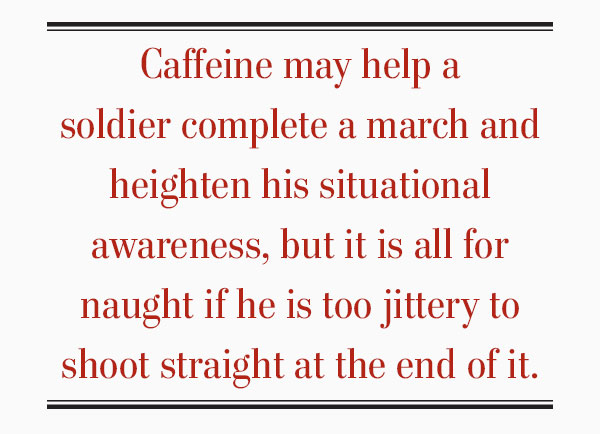 Much of the research in both Canada and elsewhere has been devoted to whether side effects of performance-enhancers can inhibit on-the-job judgment or performance.

Menard said in an interview with Legion Magazine that steroid side effects are minimal in most people. Steroids, he said, can make the difference between a long career and a short one, between climbing your way out of a life-threatening situation or not. But side effects, when they do occur, can be “massive.”

“The side-effects I worry most about are the psycho-social ones,” Mendard said. “These guys can become unpredictable and volatile; this whole ’roid rage thing.

“You don’t need a guy in Afghanistan negotiating with a warlord in a sensitive moment and he’s raging on steroids. That’s how everybody gets shot.”

Likewise, caffeine may help a soldier complete a march and heighten his situational awareness, but it is all for naught if he is too jittery to shoot straight at the end of it.

On the use of amphetamines, or speed, by pilots, the journal ArmyTech said in 2013 that side effects, including confusion, delusions, auditory hallucinations, aggression and, in extreme cases, psychotic behaviour, are “hardly ideal for a person in charge of a multimillion-dollar war machine.” 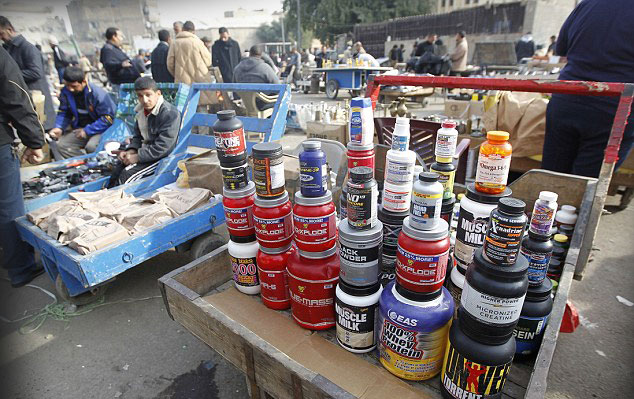 U.S. army nutritional and body building supplements left behind in Iraq were sold at a Baghdad market in 2011.
Reuters
The American military already tends to dispense performance-enhancers, including amphetamines, more liberally than many countries, especially Canada.

Majors Harry Schmidt and William Umbach, the two American F-16 pilots involved in the friendly fire incident that killed four Canadian soldiers engaged in an April 2002 training exercise in Afghanistan, claimed their judgment may have been impaired by amphetamines they were pressured to take by the U.S. Air Force.

They said U.S. pilots were routinely pressured to take dextroamphetamine, known as “go pills,” to keep them alert on irregular schedules, night flights and long missions. Some B-52 missions to Afghanistan originated in Colorado and exceeded 20 hours.

The air force conceded at the time that low doses of the drug, manufactured as Dexedrine, had been offered to pilots since the Second World War. It insisted the drug is safe and its use was voluntary as part of a “fatigue management program.”

Meanwhile, an anonymous 2016 survey indicated a quarter of U.S. Army Rangers used an illegal steroid or other performance-enhancer. A recent research paper on the subject called it a serious issue, especially since most were not subject to medical oversight and the scientific literature on steroids use is “severely lacking.”

Chitty, at the special ops command science and technology office, told Defense News that commanders want to improve physical performance in harsh environments and under extreme conditions—including at elevation and underwater, and without access to food or fluids for extended periods.

The initiative has context in the current state of U.S. military operations.

General Raymond Thomas, head of U.S. Special Operations Command, told a Senate committee last year the country’s special forces were being pushed too hard and spread too thin. He said his troops were psychologically exhausted after decades of continuous war, leading to problems, including high suicide rates.

“The idea that the Pentagon can transform its soldiers into some kind of cyborgs by pumping them up with drugs and bio-stimulants is an illusory expectation,” he told Radio Sputnik. “Yes, there are drugs out there that allow a person to stay awake for several days straight. But this is a short-term effect, followed by a long pause to restore a person’s normal physiological capabilities.

“The idea that soldiers, as if by magic, will be able to increase their physical endurance, go without sleep for weeks on end and conduct [effective] military operations—all of this is tripped up by the physiological limitations of the human body. There simply cannot be such miracles.”

This, despite the fact the Russians are considered world leaders in the military use of performance-enhancing drugs. The former U.S. deputy secretary of defence, Bob Work, has said: “Our adversaries, quite frankly, are pursuing enhanced human operations. And it scares the crap out of us, really.” 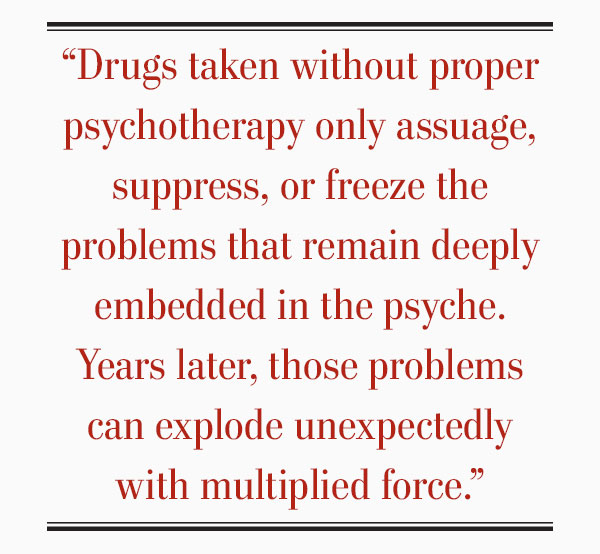 Use of performance-enhancing technologies by the military became more refined over the years. Pilot Paco Geisler said the stimulants he was given during the U.S. invasion of Panama—dubbed Operation Just Cause—in 1989 and 1990 were much less invasive than what he’d received in Vietnam.

“I don’t know if the difference is dose or drug formulation or what,” he said. “But there were no noticeable side-effects during Just Cause; we just felt wide awake.

“There was none of the nervousness—no feeling ‘wired’ like I remember in Vietnam.”

In one survey, 60 per cent of U.S. aircrews who used amphetamines during the first Gulf War declared the drug “essential” to mission success.

It appeared to work, at least for a while. The rate of mental breakdown among U.S. soldiers during the Second World War was 10 per cent. It was four per cent in Korea, and just one per cent in Vietnam.

“This outcome, however, was short-sighted,” the magazine pointed out. “By merely alleviating soldiers’ symptoms, antipsychotic medicines and narcotics brought immediate but temporary relief.

“Drugs taken without proper psychotherapy only assuage, suppress, or freeze the problems that remain deeply embedded in the psyche. Years later, those problems can explode unexpectedly with multiplied force.”

Like many things military, the focus has often been on results now, consequences later.

War is about winning, and the balance between winning and winning at all costs is a delicate one. A 1997 article in Airpower Journal presaged Menard’s candid words.

“Using drugs to enhance performance in sports may be ‘immoral,’” said the premier journal of the U.S. Air Force, “but war is not a sporting event. Success in combat is not a question of fairness but of power.

“We do not seek to equalize each side’s chance of success prior to initiating contact (as we do in sports), but we do seek to obtain every advantage for our forces.”

Next week Part 2: Drugs and war go hand in hand.