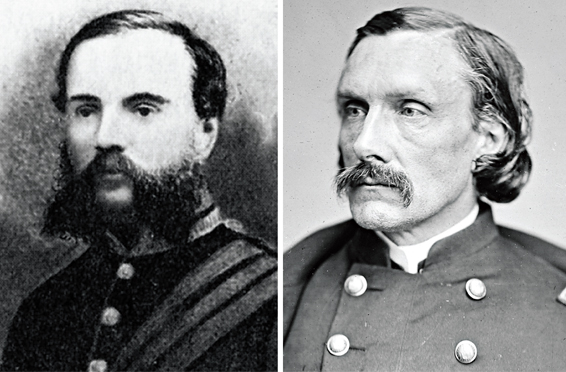 On the morning of June 2, 1866, Lieutenant-Colonel Alfred Booker led about 850 Canadians, mostly men of the 13th Battalion (today’s Royal Hamilton Light Infantry) and Toronto’s Queen’s Own Rifles, from the village of Ridgeway in Canada West toward a Fenian force that had seized the town of Fort Erie on the Niagara River the previous day.

Booker was born in Nottingham, England, in 1824 to Baptist parents—Alfred Booker Sr. being a church reverend. Ostracized in Anglican England, the Booker family emigrated to Canada, settling in Hamilton in 1843. Seven years later, Alfred Jr. established a thriving auction house. To advance his social position, Booker gained a militia commission in 1851 and by 1858 commanded Hamilton’s militia forces. One Hamiltonian described him as “clever and versatile…fluent of speech and somewhat florid in manner.”

Although he was Hamilton’s militia commander, Booker was no real soldier. He was at best a capable administrator and had never seen combat. In this, he was not unlike most of his militia contemporaries.

Booker’s force on June 2 was not to engage the Fenians alone. British Colonel George Peacocke was approaching from Chippewa with about 1,700 regulars. But Peacocke was running late and a message instructing Booker to await his arrival was either received too late, as Booker asserted, or ignored by him. Whatever the truth, Booker ordered an attack against the Fenians—now dug in on a formidable ridge about 10 kilometres west of Fort Erie.

Lacking any horses except his own, Booker was unable to effectively scout the Fenian position. When skirmishers leading Booker’s advance spotted several Fenian officers on horseback, they mistook the riders for cavalry and shouted a warning. Alarmed, Booker ordered the Queen’s Own Rifles to form square to repel a mounted charge. Quickly realizing his mistake, Booker directed the men to reform in attack columns. But it was too late, the Fenians were pouring fire into the militia ranks from the front, the right flank and the rear. When the Fenians advanced in mass, Booker ordered a withdrawal. “But the confusion had become panic,” he testified later. The battle was lost.

In the aftermath, Booker’s reputation lay in tatters. Although absolved by a military inquiry, he resigned his 13th Battalion command on July 30 and retired from the militia in 1867. Leaving Hamilton for Montreal, he died on September 27, 1871, at the age of 47.

It is the English government we hate [and] desire to fight. It is the [English] flag that we detest, and wherever it floats the Irish people…claim the right to pull it down and trample it beneath their feet. It was prompted by this feeling that I attempted to invade Canada,” Lieutenant-Colonel John O’Neill wrote after Ridgeway.

Born in Ireland on March 9, 1834, O’Neill came to the United States at age 14 during the 1848 famine migration. He joined the U.S. Cavalry in 1858, fought in Utah’s Second Mormon War, deserted to join the California gold rush, and enlisted in the Union Army when the Civil War broke out. Frustrated by lack of promotion and ill from a wound, O’Neill resigned his commission in November 1864 and moved to Nashville, where he soon dominated Tennessee’s Fenian movement.

In 1865, a Fenian Brotherhood faction hatched a scheme to seize British North America in order to trade it back to Britain in exchange for Irish independence. On May 27, 1866, O’Neill arrived in Buffalo at the head of a 115-man Nashville regiment. Most of the Irish volunteers were Union Army veterans. While thousands of Fenians descended on Buffalo, O’Neill led a 1,000-man advance party across the Niagara River on June 1 and occupied Fort Erie.

The next morning, O’Neill occupied a ridge overlooking Lime Ridge Road and dug in there with at least 650 men. When mounted scouts reported militia troops approaching, O’Neill prepared to fight a defensive battle. As Booker’s force became increasingly disorganized, O’Neill’s better-trained men poured steady volleys into them at ranges of 200 to 500 metres. When Booker’s men broke, O’Neill withdrew to Fort Erie to await reinforcements. Canadian casualties at Ridgeway
numbered 9 killed and 33 wounded. Fourteen Fenians were dead and several wounded.

After defeating a second Canadian force, but still lacking reinforcement, O’Neill retreated across the border and was arrested for breaking U.S. neutrality laws. Charges soon dropped, O’Neill became a Fenian hero. On May 25, 1870, he led a much smaller, badly botched raid near Frelighsburg, Que. Again arrested, O’Neill was sentenced to two year’s imprisonment but pardoned by President Ulysses S. Grant. Undeterred, on Oct. 5, 1871, O’Neill seized a Hudson’s Bay Company post in the Red River Valley at Pembina, Manitoba. Again arrested, he was acquitted.