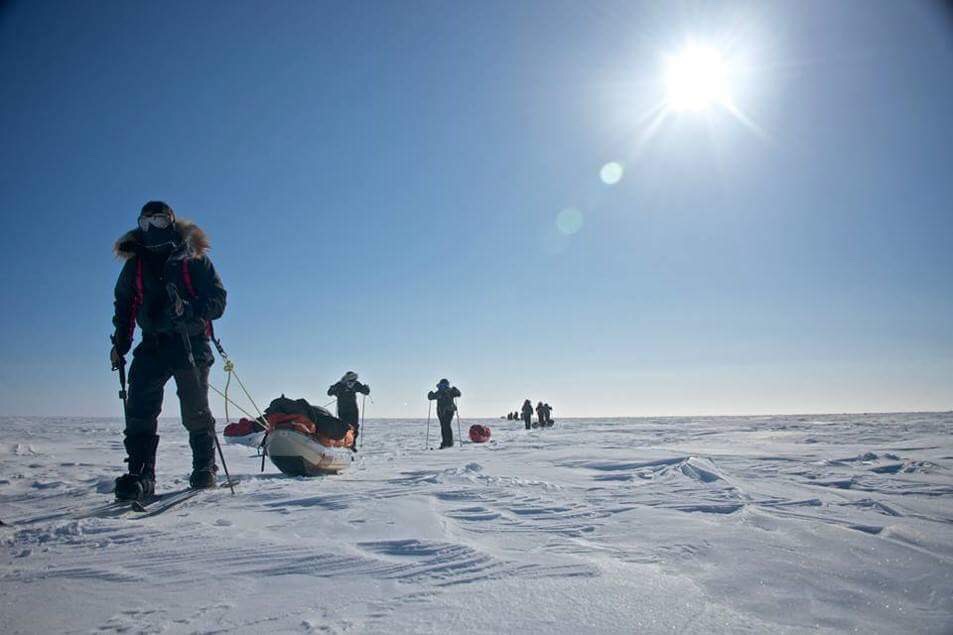 “You have people who have PTSD, who have extreme physical injuries, and people talk about them as being ‘broken’ soldiers,” says Dentry-Travis, a post-doctoral research psychologist at the University of Manitoba in Winnipeg. “But these people are doing things that most people can’t or won’t do. They’re climbing to the top of a mountain in Antarctica. They’re skiing to the North Pole. They’re not broken at all. They’re able to do more than other people are able to do because they see that they’ve been able to overcome adversity.”

Polar environs notwithstanding, she likens them to dandelions in a world of orchids.

“Orchids bloom in a perfect environment. They’re this beautiful flower and everyone oohs and ahhs over this orchid but the orchid has never had any adversity in its life. You take it out of the perfect environment and try to make it grow on some gravel pathway, it’s going to die.

“You take the dandelion and it’s pushing itself up through the cracks in the concrete and it’s blooming and it’s beautiful.”

Dentry-Travis left a 10-year military career in 2008 to pursue a master’s degree at the Department of War Studies, King’s College London. She went on to complete a PhD. Now she is focusing her post-doctoral efforts on fieldwork of a rare sort. 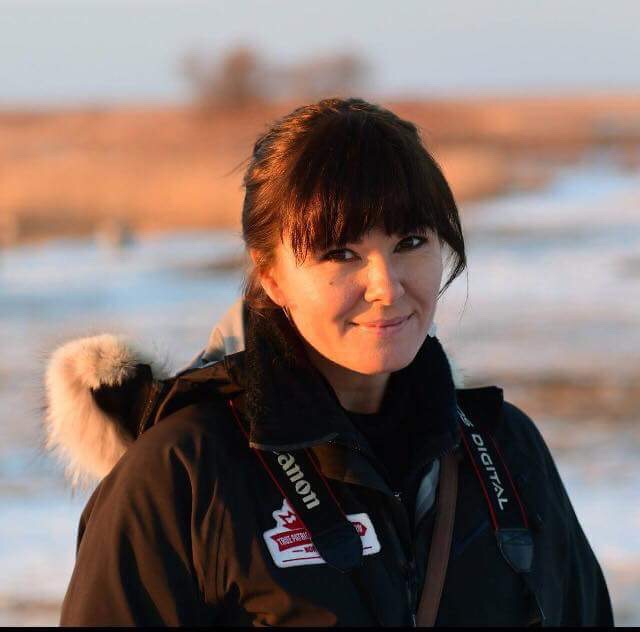 Dentry-Travis left the military in 2008 to pursue a master’s degree at the Department of War Studies at King’s College London. She went on to complete a doctorate. Now she’s focusing her post-doctoral efforts on fieldwork of a rare sort.
Courtesy of Sarah Dentry-Travis
She joined a 2014 Arctic expedition launched by the True Patriot Love Foundation. Billed as the largest manpowered trek of its kind ever mounted, 12 veterans, 35 civilians and six guides skied more than 100 kilometres to the magnetic pole. 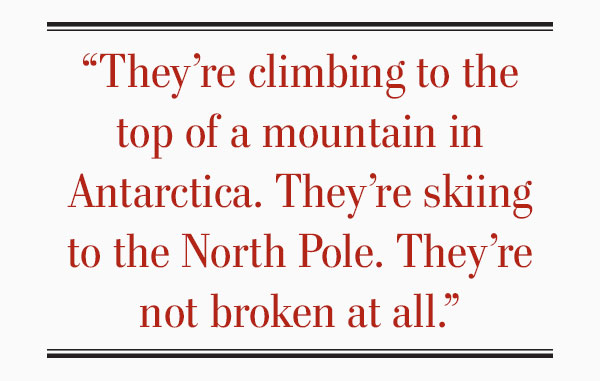 Most challenges were what researchers call “real-world stressors”—matters of life-and-death that can’t be reproduced by white-coated clinicians in laboratories.

Dentry-Travis, an artist, Invictus Games medallist and single mother of two, collected research data all the way, including saliva samples (her own among them) that yielded levels of telltale enzymes and stress hormones.

She did advanced work in 2016 as expedition researcher in Antarctica, where a similar team climbed 4,892-metre Vinson Massif, the continent’s highest peak.

“What’s great about expedition research is you have a group of people who are with you for 10 to 15 days,” says Dentry-Travis. “Everyone is eating the same food. Everyone is on the same schedule. Everyone gets the same sleep. Everyone experiences the same weather. They don’t have any outside influence.” 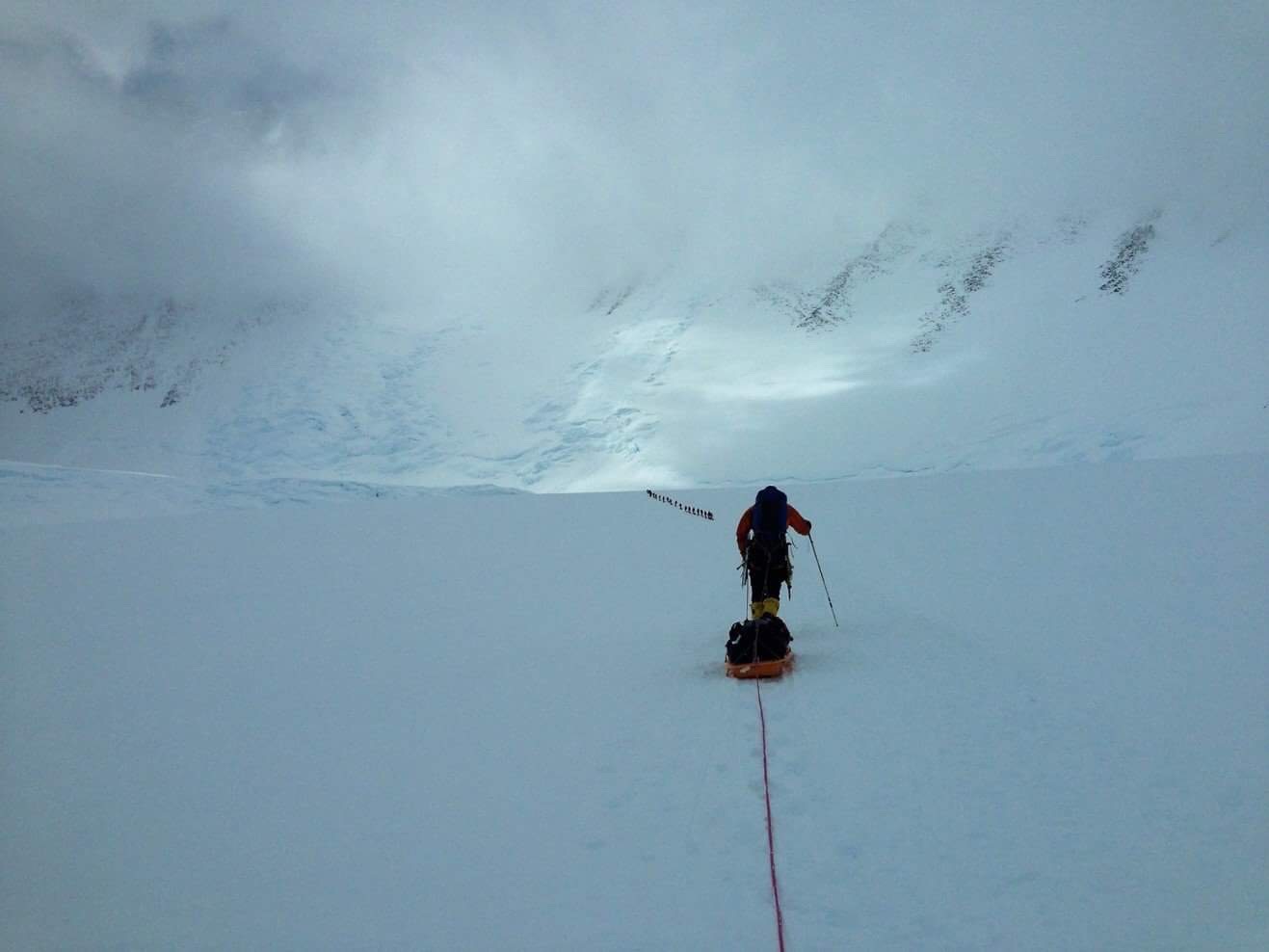 The long and taxing trek to the top of Antarctica’s 4,892-metre Vinson Massif, the continent’s highest peak, in 2016.
Courtesy of Sarah Dentry-Travis
In other words, they are isolated and, even by the standards of laboratory research, they’re operating in a uniquely controlled environment.

Lab subjects will show up for a two-hour session and then return home. They might say they ate eggs for breakfast, but researchers can’t know for sure if they did. Other variables can influence lab data—the job might be rough; the marriage souring; the commute might have been particularly frustrating that day.

Furthermore, expedition research commands a unique form of mindfulness among its subjects. Lingering or outside stresses tend to subside or are overtaken by the immediate issues at hand. A hungry polar bear will do that to you.

Dentry-Travis has written articles in scientific journals on the practice of collecting data in extreme environments. Now she is completing her first papers based on the expedition data.

Her work aims to understand better the components necessary to conquer extreme situations and still achieve set goals. She says her findings, the details of which she cannot talk about until they’re published later this year, are surprising and will advance research in the field.

“It’s going counter to what we expected. It’s very interesting.” 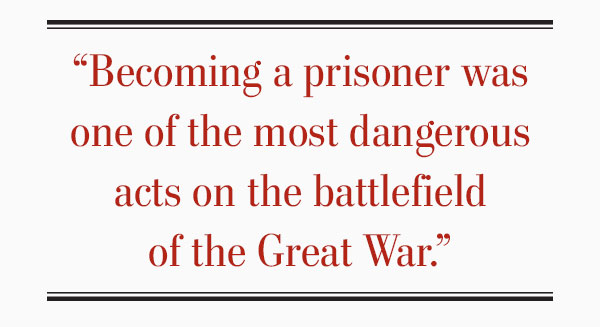 “The police are deployed in their own city, their own community, and they have to deal with policing their own population, their neighbours and such. I find the police have a harder time because there is no ‘off’ for them. There’s no coming back home and being able to relax. They’re constantly ‘on.’”

She says first-responders face some similar challenges as their military counterparts—spontaneous and unpredictable situations in unfamiliar homes, as well as violence, injury and death. 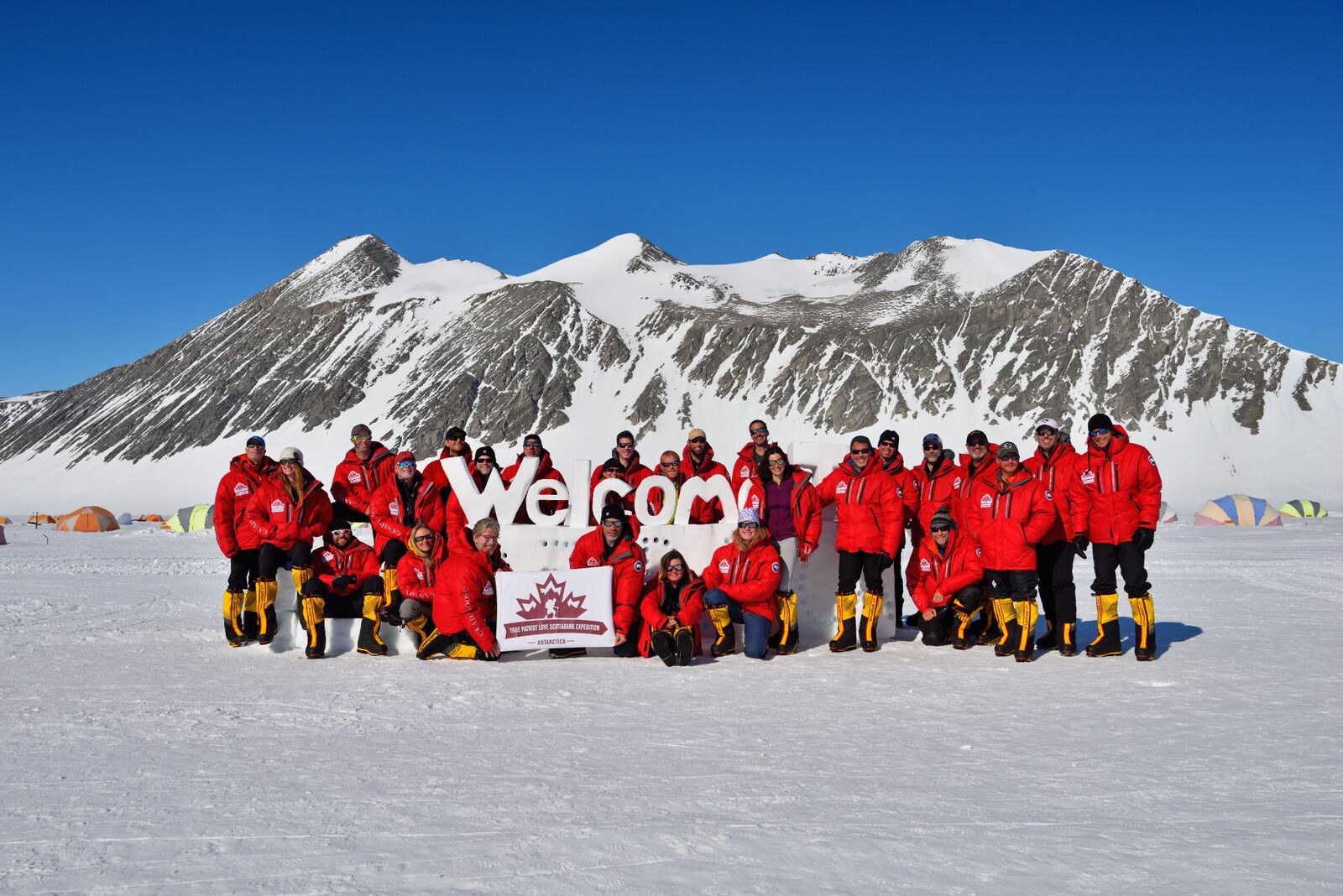 Participants in the two polar expeditions, some of whom are seen here in Antarctica, raised millions for veterans-related programs.
True Patriot Love Foundation
“And this is every single day. It’s not just a six- or nine-month tour for them.”

Paramedics have been estimated to be four times more susceptible to PTSD than the general populace, although Dentry-Travis says the numbers vary by study. The persisting stigma surrounding mental health, too, can influence results. Some research subjects are less inclined to acknowledge their vulnerabilities.

The PTSD issue extends to emergency operators and dispatchers who are thrust into situations, do their jobs, and then move on to the next crisis. They rarely are privy to resolutions or get to share in the relief or satisfaction when lives are saved.

“I’m working with them to try to discover ways that they can perform at their peak level and become more durable to their daily traumas and stresses so that they don’t end up succumbing to them at the end of the shift.”

Yoga and mindfulness are particularly effective coping mechanisms that can help prevent the onset of post-traumatic stress or mitigate its effects. The problem, says Dentry-Travis, is the worlds in which the disorder is most prevalent are the same ones that stigmatize mental-health issues. They are largely populated by macho attitudes incongruent with practices such as yoga.

“Yoga and mindfulness help you reset a healthy chemical balance within your body. Unfortunately, yoga and mindfulness are seen as kind of fluffy and new-aged…whereas they might really help, much more than drinking with your buddies.

Alternatives to yoga include exercise, sports, hobbies, walkabouts in and communing with nature—absorbing activities that demand mindfulness. Even target shooting can qualify. 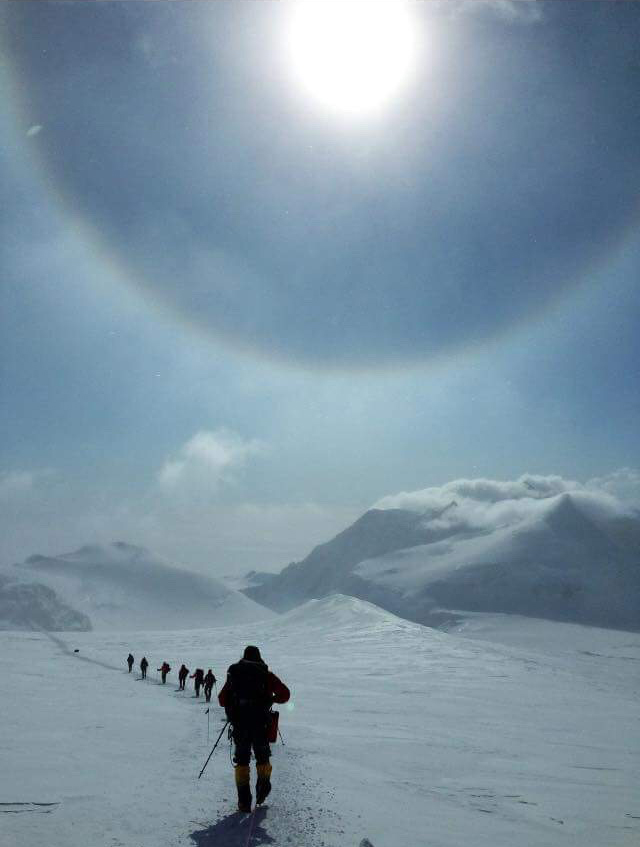 A sun dog—caused by airborne ice crystals—looms over trekkers making their way to the top of Antarctica’s highest peak in 2016. Dentry-Travis says expedition research offers great opportunities for scientists because, even by laboratory research standards, the environment is uniquely controlled.
Courtesy of Sarah Dentry-Travis
“I don’t think you can ever eradicate PTSD from your entire population,” said Dentry-Travis. “It’s a natural reaction and sometimes some traumas are just too big to be able to process them and not be impacted by them.

“But what you can do is try to figure out ways to lessen [the impact] and also try to find ways to help people after the fact…. Your system was derailed by an experience; I believe you can get your body back on a more positive track.

“It doesn’t just happen with the stab of a finger. You’ve got to train it.” 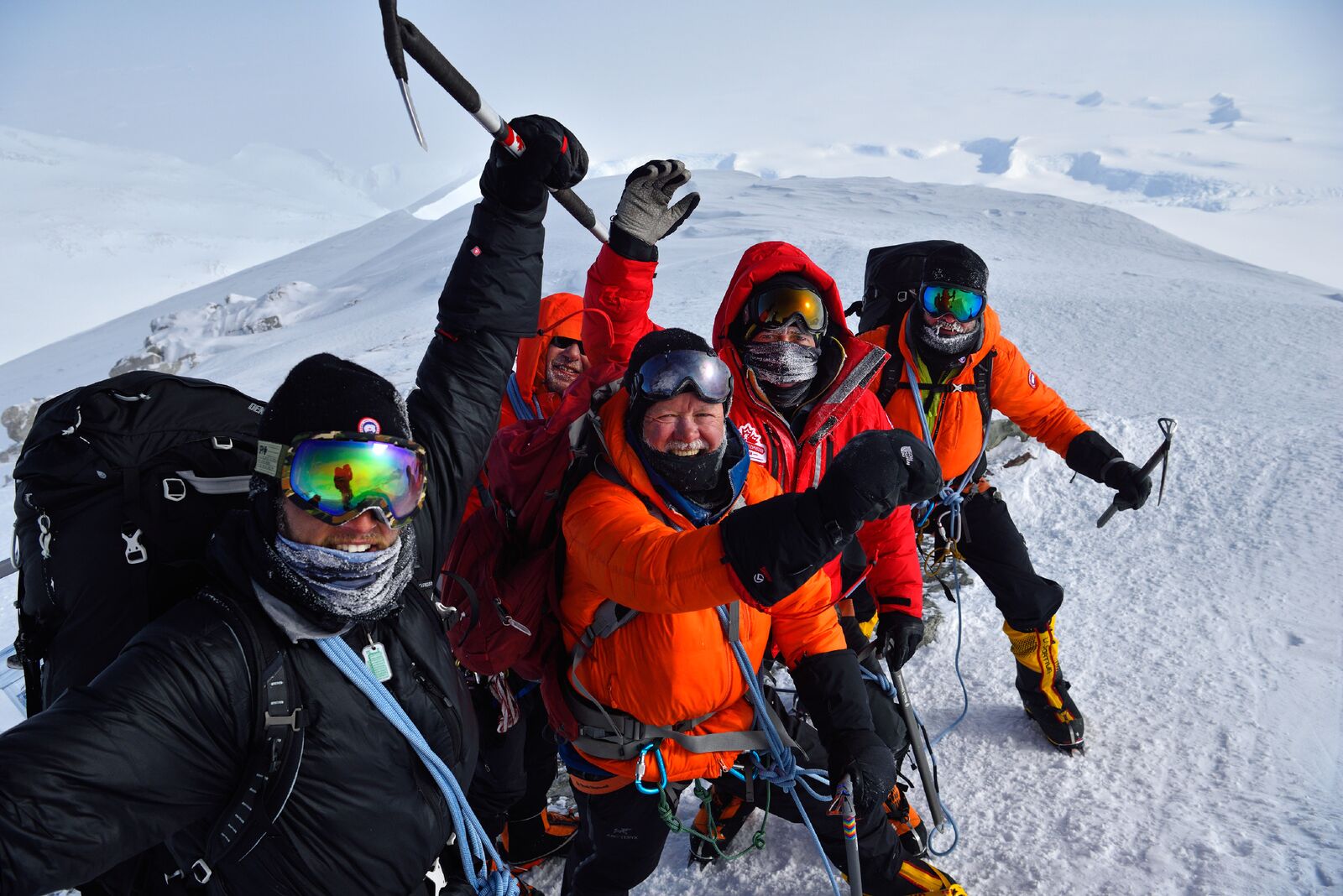