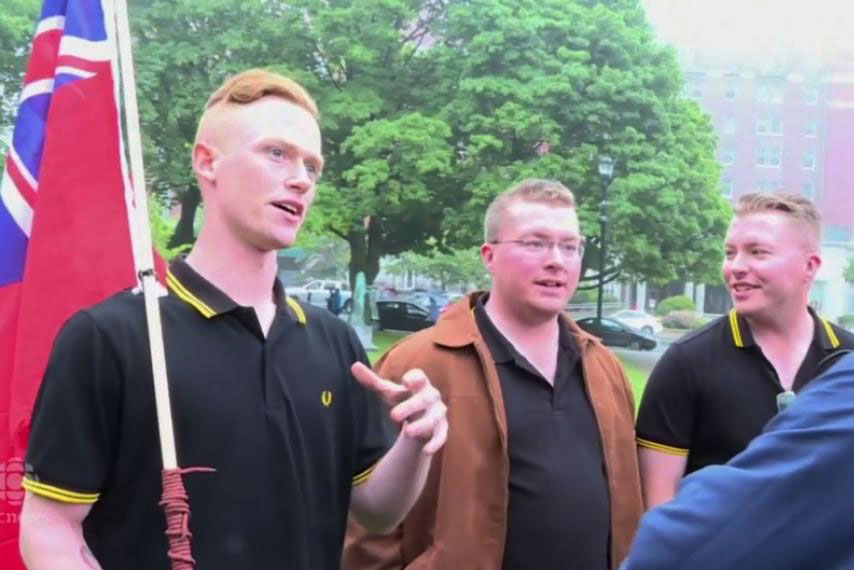 Screengrab of footage showing members of the Proud Boys group confronting protesters at a Canada Day demonstration at the statue of Edward Cornwallis in Halifax in 2017.
CBCNEWS

In early October, the army made it clear that the Canadian Armed Forces was not about to let racist behaviour among its members derail its reputation.

On July 1, five members of the CAF disrupted an aboriginal ceremony at a statue of Lieutenant-General Edward Cornwallis in Halifax. The protest against Cornwallis, who founded the settlement of Halifax in 1749, was over his harsh treatment of the Mi’kmaq Nation. The CAF members who opposed that demonstration were members of the Proud Boys, a far-right men’s organization which declares its members to be “Western chauvinists who will no longer apologize for creating the modern world.”

In August, following a military police investigation, four of the five servicemen were returned to regular duties while remaining on probation. The fifth has left the military, a process that was underway before, and unrelated to, the incident.

It is entirely appropriate for the Canadian military to guard against extreme personal political expressions by regular members of the CAF, whether or not they are wearing their uniforms. It is not only appropriate, but essential.

The incident recalled the Somalia Affair, which roiled the military for at least a decade when cover-ups, racism, social scorn and a lack of professionalism in the CAF brought about substantial changes in almost all aspects of Canadian military life.

In 1993, the Canadian Airborne Regiment formed the heart of a group of armed peacekeepers sent to Somalia as Canada’s contribution to a deteriorating civil war and a major famine that were killing untold numbers of people in that chaotic country.

A number of Western nations had sent troops to Somalia because the country no longer had a functioning central government able to accept large donations of food from around the world and distribute it internally. Warlords and their militias were better armed than the Somali forces and they seized the food and other supplies to sell on the black market.

Some members of the Canadian Airborne Regiment were unready for the assignment, both in their training and in their attitude toward the Somali people. Put bluntly, subsequent investigation found that a number of the paratroopers had been out of control long before they arrived in Somalia, held racist attitudes, acted like biker gangs in uniform, and failed to respect their officers and senior non-commissioned members.

On March 16, 1993, two of the paratroopers beat to death Shidane Abukar Arone, a 16-year-old Somali who had infiltrated the regiment’s main camp at Belet Huen. Further investigation—when it finally took place—showed that at least one other civilian had been shot to death in a night encounter on March 4.

A Canadian journalist on the base at the time reported that Canadian soldiers were being held in an investigation into Arone’s death. Two commissions of inquiry, one by the CAF and the other by an independent government commission, revealed this streak of poison among some of the paratroopers and cover-ups at higher ranks, which subsequently revealed deep-seated morale and respect issues among the paratroopers.

After the Cornwallis episode, Canada’s top general, Chief of the Defence Staff Jonathan Vance, promptly said the incident was “deplorable.”

“We are the nation’s protectors,” said Vance. “Any member of the Canadian Armed Forces who is not prepared to be the defender we need them to be will face severe consequences.”

Canadians expect our soldiers to be highly trained and disciplined and to respect Canadian values wherever they are deployed. Today’s CAF officer corps is one of the best educated in the world and CAF soldiers, sailors and airmen and airwomen are highly trained in the laws of war and armed conflict and know what is expected of them by Canadian citizens. There is no room for deviation in this policy.

Kudos to the army for taking action on this recent transgression at the earliest possible moment.