The fire, which started in late April 2016, devastated the town. “In the area where McMurray Branch is, the branch and three buildings which are practically adjacent were the only buildings untouched by the fire,” said Strong.

However, there was still extensive damage caused by smoke and water. “We gave the branch $272,556—and that was just to cover those things that the insurance company would not cover,” said Strong.

Another $474,081 went to individuals and families. The fund assisted 21 veterans, the RCMP veterans association and firefighters. While insurance covered the damage to school buildings, it did not cover the books that were lost, so the fund spent $80,000 to put books back in the schools. 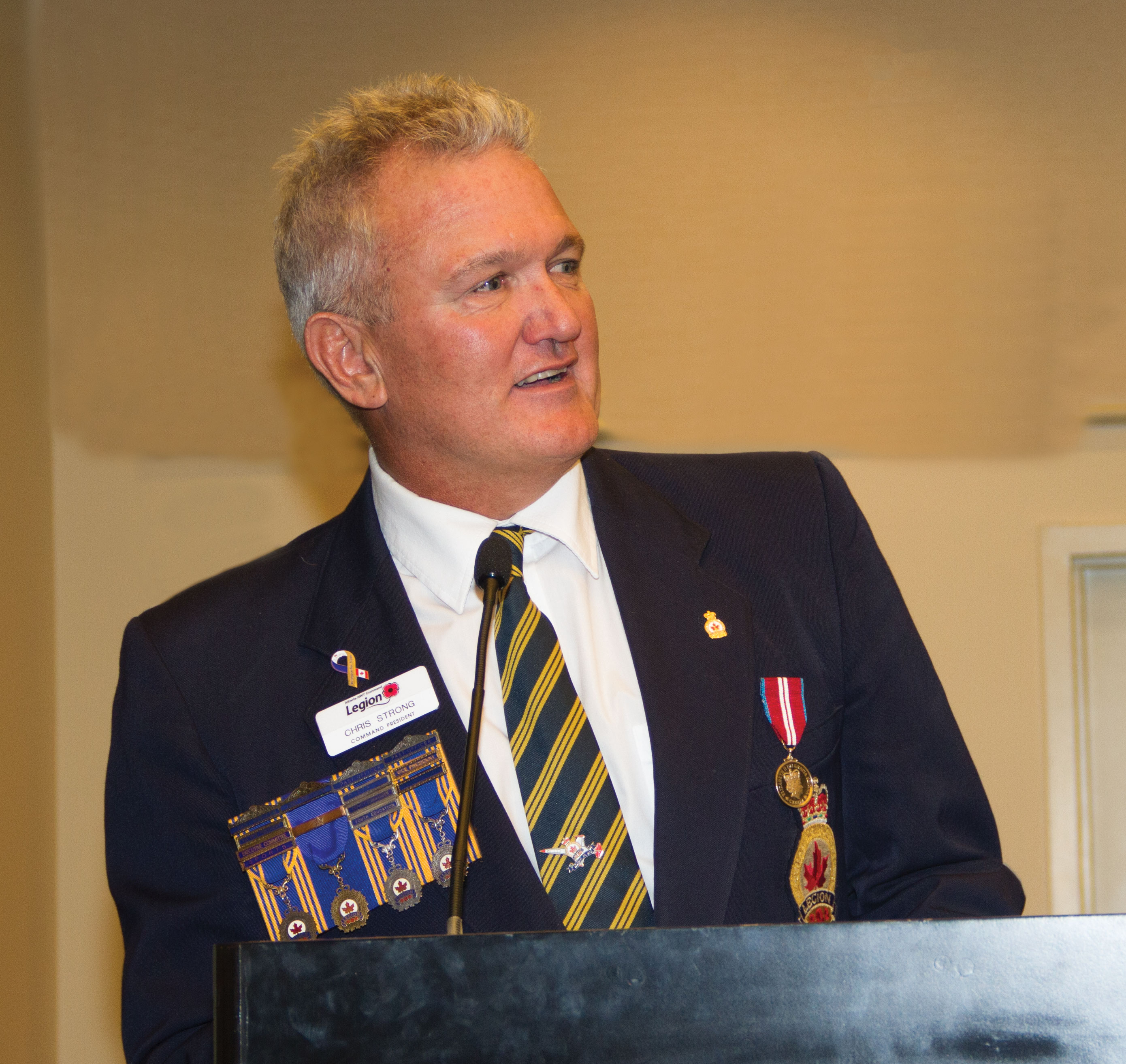 Chris Strong thanks delegates on his re-election.
Tom MacGregor

The recovery of Fort McMurray was a good news aspect to the lively convention held at the Double Tree Hotel and Convention Centre in Edmonton’s west end. All activities took place there.

The Alberta-Northwest Territories Command Ladies Auxiliary was holding its convention at the same time in the same hotel. Both groups came together for a parade, which began in the hotel parking lot and proceeded into the convention hall.

Martin brought an update on improvements to veterans’ benefits introduced in the 2017 federal budget. She also said all nine regional VAC offices, which had been closed by the previous government, had been reopened and 420 new employees had been hired as of the end of August.

“A team from Edmonton also goes once a month to Yellowknife to help our clients in the north,” Martin added.

Barham, who was also attending as a delegate from North Calgary Branch, brought greetings from Dominion Command.

When speaking of the challenges faced by the Membership Section, he asked all members of the Legion in the room to stand up. Then he asked those 70 years of age or more to sit down. Then those over 60 to sit down, leaving less than half the delegates standing. “Look around, those left standing are your future. More than 80 per cent of our membership is 55 or older,” he said.

Barham said the Legion has to accept new ways of doing things and attracting members. “The branches should try something we did when I was with Tim Hortons,” said Barham. “We called it SETS—smile, eye contact, ‘Thank you’ and ‘See you again.’”

Geoff Summach of SAW Strategies gave a presentation on “the people behind the poppy,” a marketing campaign developed for the command. It calls on all Legion members to be service officers. “Not every veteran knows the branches are there to help and the amount of help that they are able to provide,” he said.

The strategy would reach out to businesses and institutions that could provide what he called “veterans’ connection points.” These would be a sticker or a sign that would list the locations of the nearest Legion branches. The branches would become “veterans connection stations,” where help could be provided or from which referrals could be made.

Joe Pollock of the Joint Personnel Support Unit (JPSU) explained that the JPSUs were created nine years ago to meet extraordinary circumstances brought on by Canada’s involvement in the war in Afghanistan. “Even in Korea, we did not take so many casualties in such a short time,” he said. “We are second to none when it comes to casualty support.”

Bobbi Foulds of Joe Wynne Branch in Edson gave a presentation on the 2017 pilgrimage of remembrance. She quoted the guide for the tour, John Goheen, as saying “You die once we leave our mortal coil. We die a second time when our name is no longer spoken.” She said the trip would ensure that the names of those who are buried in the cemeteries kept by the Commonwealth War Graves Commission live on.

Resolutions brought lively debate. Early in the convention, Strong presented a concurred resolution noting that the command had been without a treasurer for most of its term and had instead created a finance committee. The proposal was that the position of treasurer be eliminated and replaced by a committee. It was further resolved that the finance committee be comprised of the president, first vice, executive director, accountant and any additional members in good standing as the committee deemed necessary.

It was the “further resolved” part that brought the challenge. It was noted that the president already has an ex-officio position on all committees but there were also objections that the paid staff (the executive director and the accountant) would be members of the committee.

In the end, the resolution was amended so that the committee would consist of the first vice and two other members of the executive, advised by the executive director and the accountant. Strong moved the amendment and it passed.

A non-concurred resolution was brought back which argued that convention should be the sole decision maker on where to hold future conventions. It went further to say that command officers would not interfere with the process.

Former command president Bob Hannah of Drumheller Branch stated that the town had a new facility with a convention hall larger than the one being used in Edmonton.

In the end, the resolution was passed after several amendments. A committee would be formed to visit sites bidding on convention to ensure that suitable arrangements were made. At the same time, Strong announced that the 2019 provincial convention would be held in Drumheller.

There was a large field seeking the three positions of vice-president: Lazoruk, Vice-President Karen Shaw of Redcliff Branch, Rosalind LaRose of Stettler Branch, Mac Torrie of Kingsway Branch in Edmonton, Kelly Lindbeck of Worthington Branch, Keith Lockett of Cold Lake Branch and Sean Cuppens of Leduc Branch. McCoy was nominated but declined to run. When the ballots were counted, LaRose, Lazoruk and Shaw were elected.

Chairman Dave Horrocks of Centennial Branch in Calgary was challenged for another term by Torrie, Scott Sadler of Onoway Branch and Larry Keddie of Drumheller Branch, with Sadler winning.