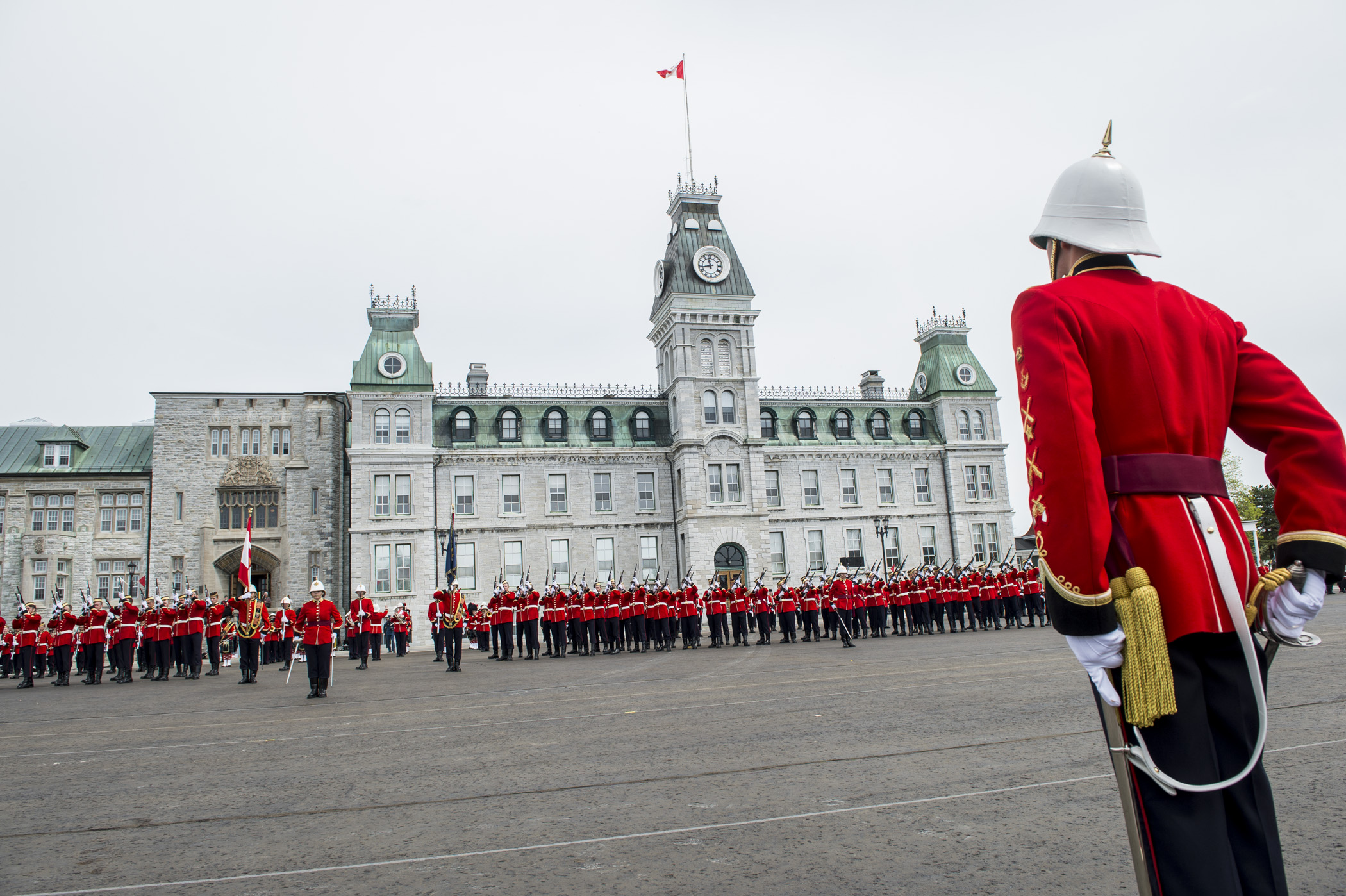 A graduating Cadet stands at attention as the Royal Military College of Canada Cadet Wing perform a Feu de Joie to salute the graduating class in Kingston.
Mary White, DND

Royal Military College (RMC) is the keystone to the entire structure of military education in Canada and, according to the auditor general’s report released in November, it is in considerable trouble. The report followed a three-and-a-half year study by a five-person audit team which visited the college on many occasions, interviewed students and teachers, examined past reports on the college going back to the 1990s and discussed the college with key persons in the Canadian Armed Forces chain of command who are responsible for the CAF’s military education program.

There is not much more important to the future of the Canadian Armed Forces than a well-functioning, efficiently managed military university and that is what RMC is, a university. It graduates commissioned officers who can handle the myriad of challenges that militaries face in a world in which war ranges from cyber attacks to kinetic operations, in all sorts of environments, and at the centre of a social-media-obsessed world. There is much more to soldiering for commissioned officers today than at any time in history and RMC graduates are supposed to enter their professions with the necessary preparation to begin to meet those challenges.

They are also supposed to be able to embark on a program of lifelong learning as they attempt to rise through the ranks in the course of their careers. Yet the auditor general’s team found much that was missing at RMC today.

The major findings are that RMC is incredibly expensive to run—its operating cost per student is about twice that of other universities. It has too many programs for the number of students, is lacking in effective military training and does not fully integrate that training with classroom learning. It also does not fully prepare senior officer cadets to consistently demonstrate “high standards of conduct and ethical behaviour” and has to do more to “ensure that military training staff have the proper skills and training they need to develop leadership skills among officer cadets.”

Some of the comments of the auditor’s report are positively damning: a governing structure characterized by “conflict and confusion between academic and military visions,” a failure to “provide officer cadets with adequate training in leadership and in the proper conduct expected of future officers,” a failure to provide “effective military leadership training, guidance, and mentoring to officer cadets” and “chronic rule-breaking and banding together [by officer cadets] to protect their colleagues when someone was caught breaking the rules.” 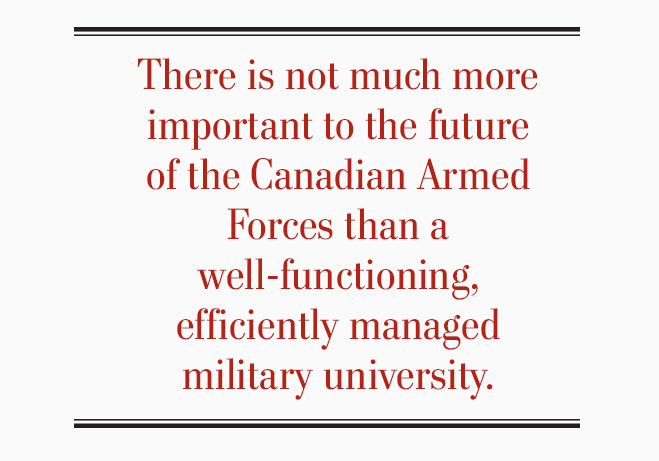 Most important of all, the audit committee found that “for most of their careers, there was no significant difference in career progression between graduates of the Royal Military College of Canada and officers who entered the Canadian Armed Forces through other entry plans.”

Now, most of the journalistic attention to things military in this country is focused on procurement problems (of which there are legion), speculation as to where and when the CAF will deploy, misdeeds within the forces, recruitment, or how the government is going to pay for its new defence strategy. The story of RMC’s troubles received almost no attention. And yet Canada could have the “best little army in the world,” as J.L. Granatstein dubbed the Canadian Army at the end of the Second World War, but only if it has the best little officer corps in the world, and that starts with officer education.

Officer education should do two things that are vital for promoting leadership: sifting out the people who have the potential to become effective leaders and training them to build on the natural inclinations they already have to become even better. That is what a good military educational institution should be doing—in fact, it should excel at it. Although it is no doubt true that many exceptional men and women emerge from RMC with the know-how and the temperament to be effective leaders, the auditor general’s report shows clearly that RMC today is falling down at the job with many others.

The Department of National Defence accepted all the recommendations of the auditor general’s report, in effect vowing to make RMC a much better run, more economic and effective institution in the future than it is now, and good for them. However, there is a long tendency in this and other militaries for recommendations such as those made by the audit committee to fall between two stools, get lost in the hubbub of operations, or be killed by the different competing parties whose collective oxen are gored in the process of reform.

What ought to happen now, if the government is serious about putting RMC at the pinnacle of Canadian military education, is to appoint a watchdog committee to make certain that each and every one of the auditor general’s recommendations are carried out without delay.

David J. Bercuson has sat on the Board of Governors for Royal Military College and was awarded an honorary doctorate from RMC in 2016. 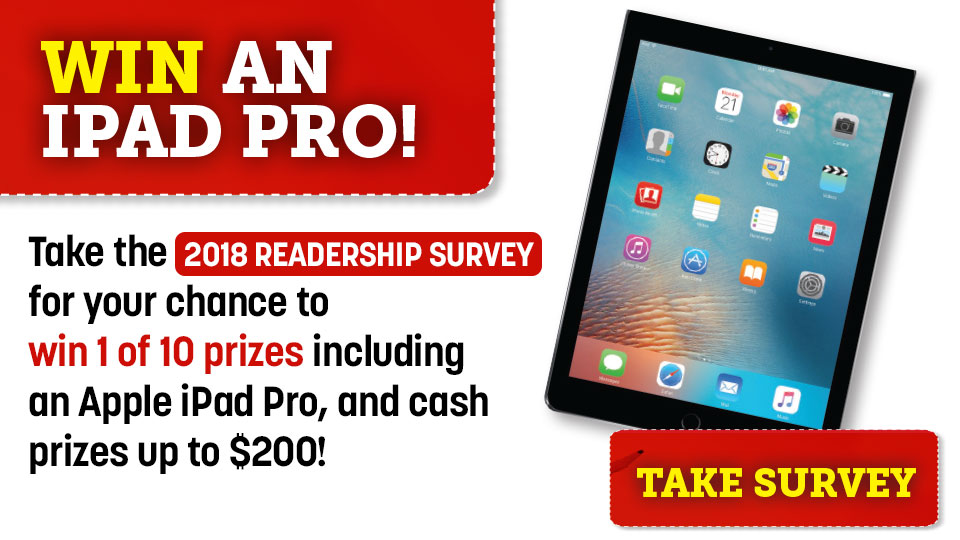 PrevPrevious ArticleFACE TO FACE: Is the government spending enough on re-equipping the military?
Next ArticleGaps in long-term care noted by ombudsmanNext