Each year since the 1960s, Canadian students from coast to coast have been participating in The Royal Canadian Legion’s poster and literary contests. Essays, poems and posters honour Canada’s veterans and those who have fallen, keeping remembrance relevant for the youth of today.

The contest is split into two divisions—poetry and essay for the literary contests and colour and black and white for the poster contests—and four categories—primary, junior, intermediate and senior. The competition was fierce, with more than 100,000 youth participating in the contests. Organized by local branches, the contests’ winning entries progress through regional and provincial levels, with national winners chosen at Dominion Command in Ottawa.

The poster by Keyu Chen, the senior black and white winner, features an older veteran wearing a beret, with a cross in place of the pupil of his right eye. The word ‘Remember’ is written at the bottom.

Chen, who attends a visual arts program in Vancouver, was told of the contest by her art teacher. Inspired by books she had recently read on the Second World War, she wanted her poster to ensure that mistakes of the past are not forgotten. “I was struck by how easy it is to keep making the same mistakes, and so I really wanted, in my poster, to make something striking, to make people remember that if we don’t remember, there are going to be consequences,” she said. She also drew inspiration from her family members who served in the military in China, before her family immigrated to Canada. 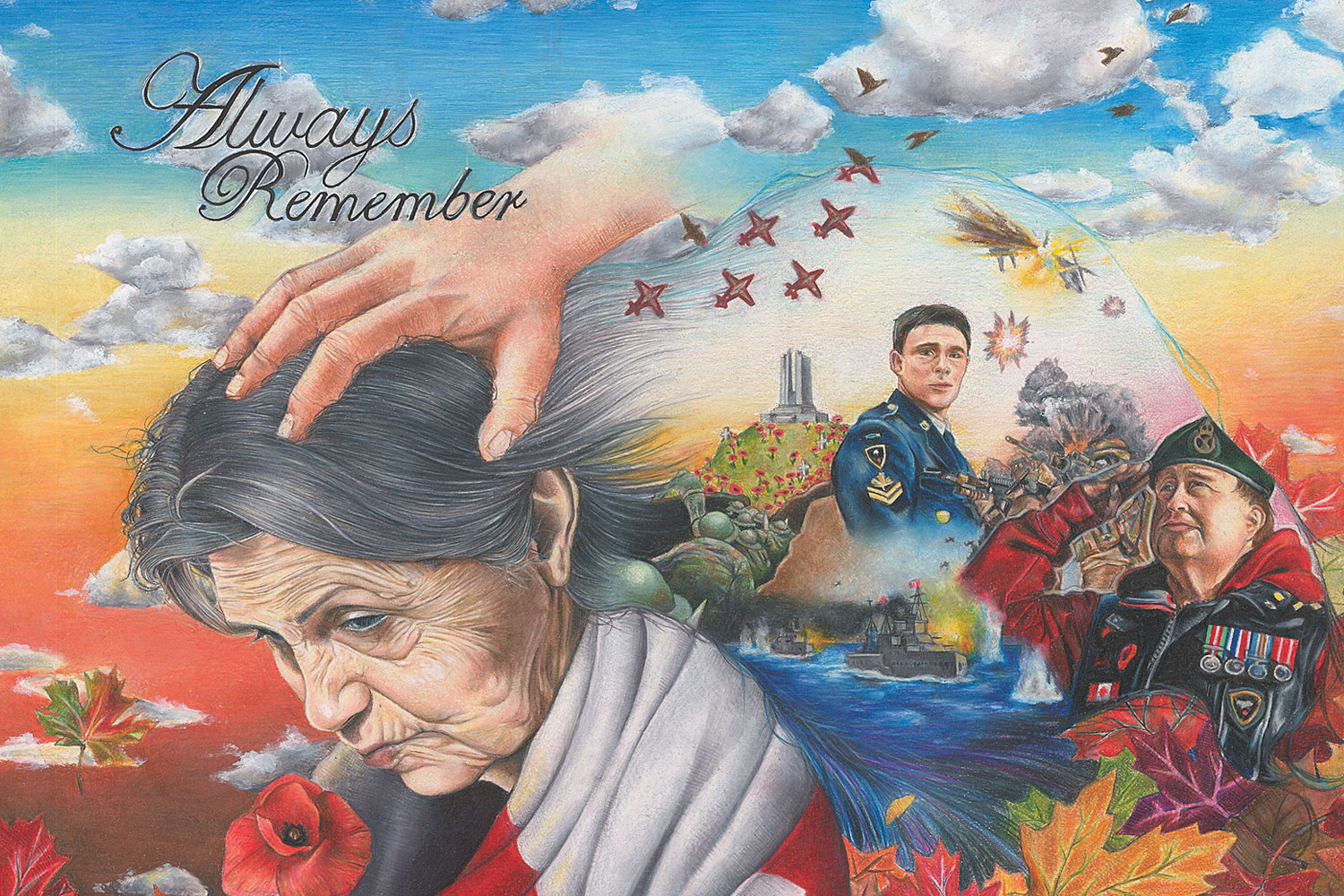 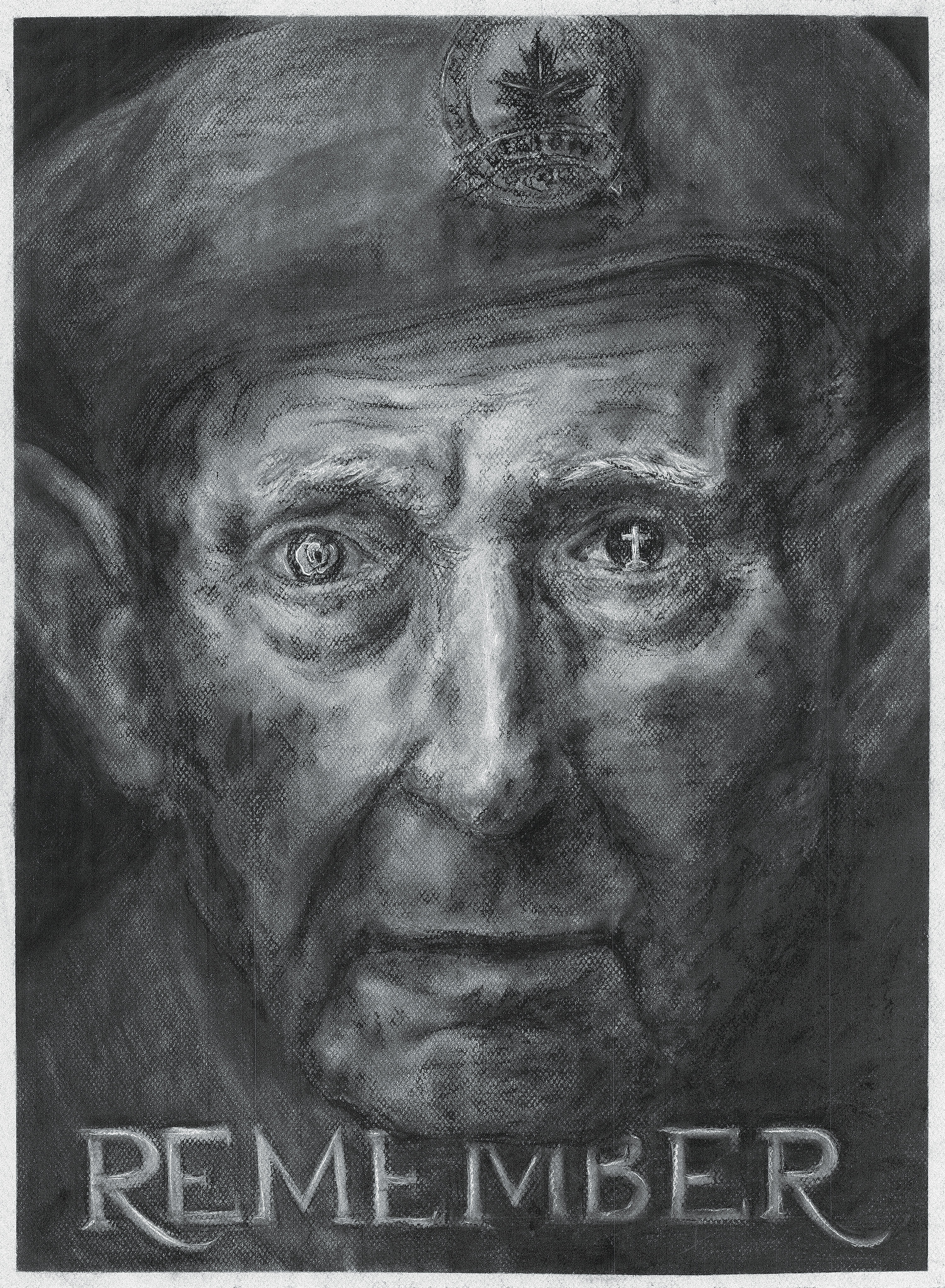 The winning posters in the senior categories are by Hye In (Grace) Park of Langley, B.C. (top), and Keyu Chen of Vancouver.

Senior essay winner Megan Miller of Moncton, N.B., also drew inspiration from family members who served in the military. Her essay—which begins with the question “Why do we wear the poppy?”—explores how the lost are remembered, what history has taught us, and what remembrance truly means. “I have family who are in the military,” said Miller, “and I was thinking about them at that time, and how they must feel when it comes to Remembrance Day.”

Miller said her English teacher has the class enter the contest in the category of the student’s choice every year. Miller’s essay beautifully expresses the personal side of remembrance, demonstrating how families, friends and communities rally behind their loved ones, waiting for them to come home. She explains that as she was writing, she was attempting to reflect on what remembrance would mean to her friends whose parents are in the military, and to those in her community who have served and who continue to serve. Miller answers her question at the conclusion of her essay: “And so we continue to wear our poppies. We continue to honour the men and women who gave their lives for us, and support the families who continue to serve our country…. Because to forget would be an insult to those who fought, that is why
we remember.” 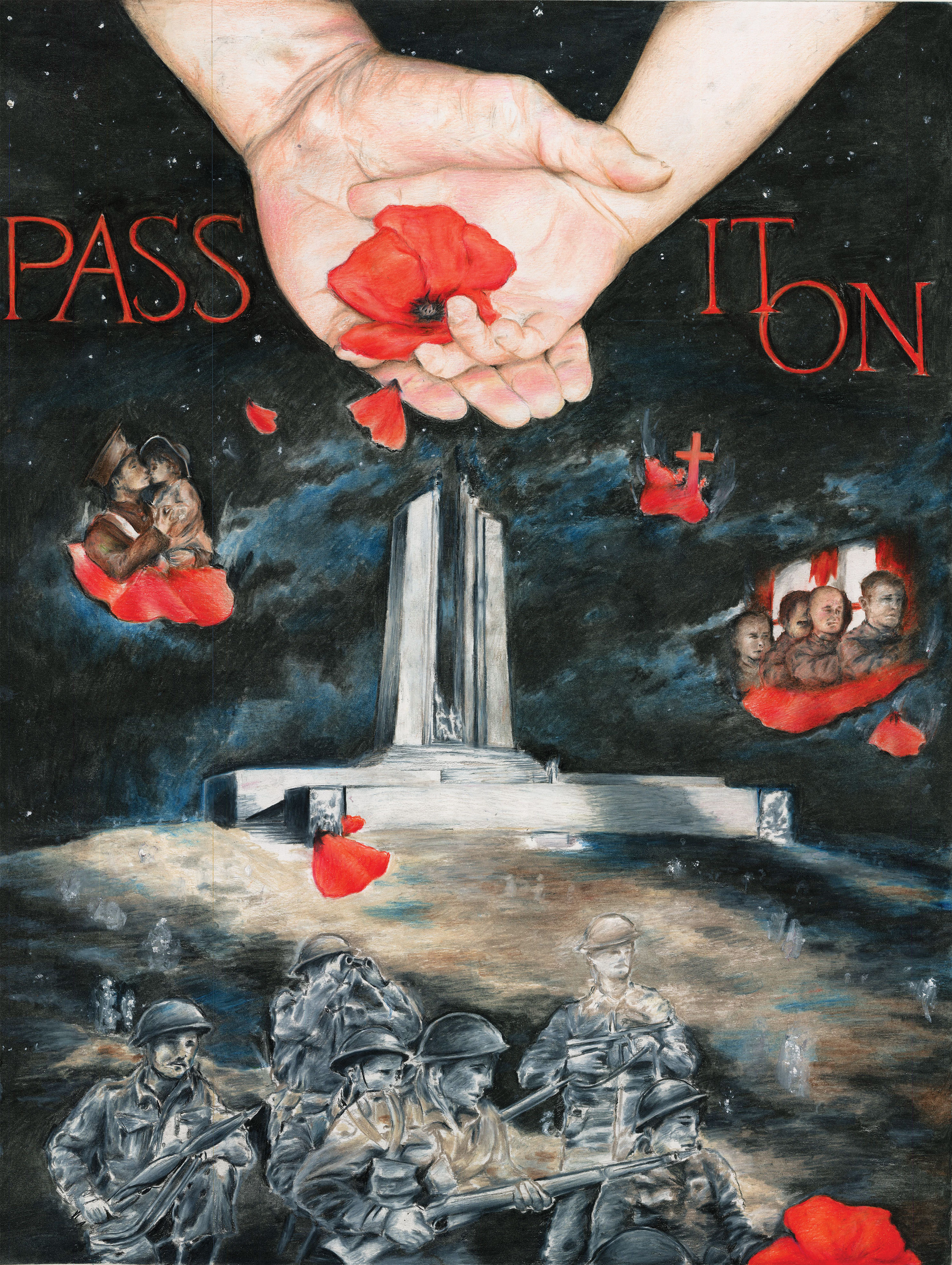 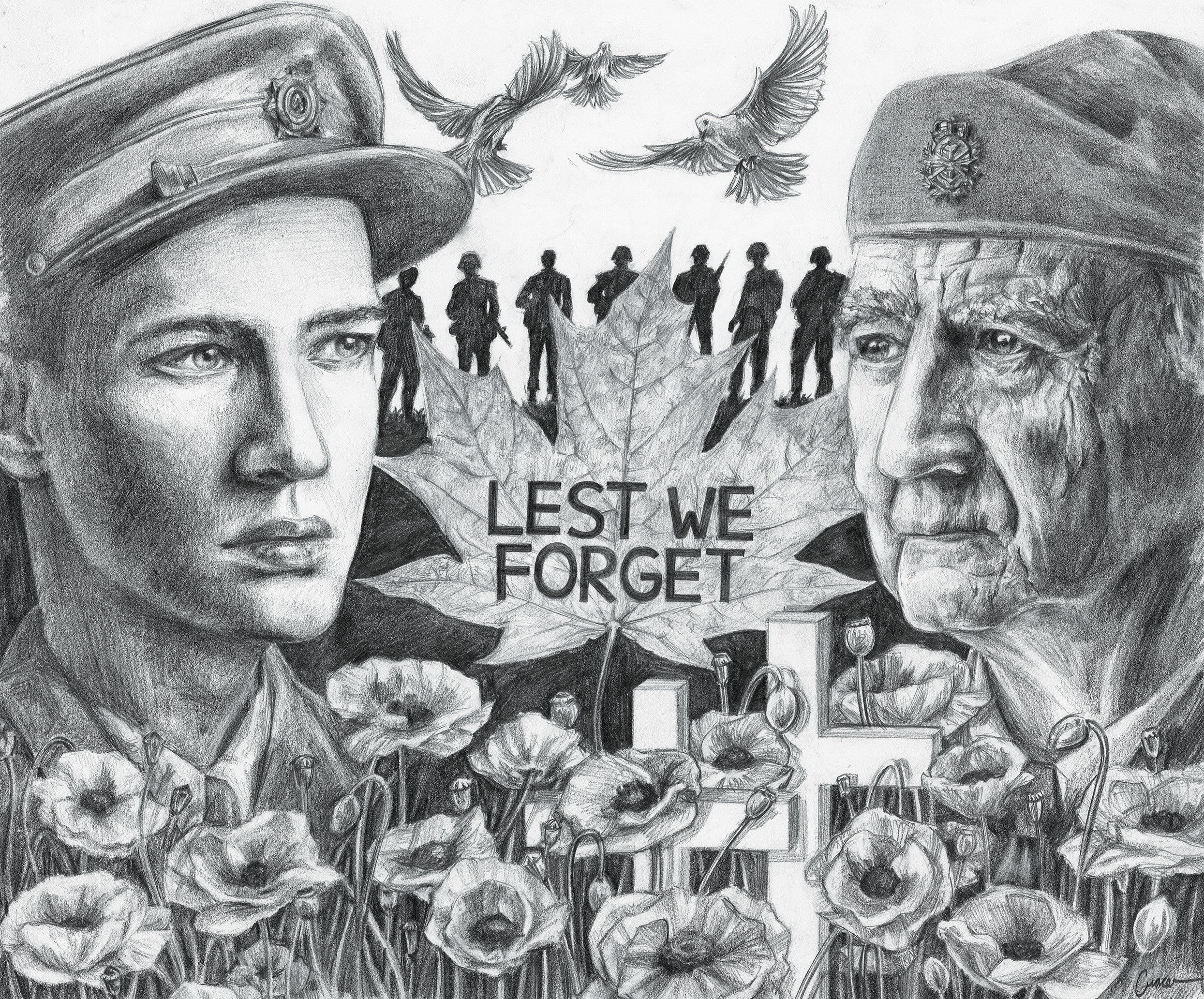 The Intermediate categories were won by Ariella Amancio of Newmarket, Ont. (top), and Grace Gao of Ottawa.

Remembrance, she adds, is “about taking the time to really reflect and think about how the past has affected people…how it is still affecting people today, and its influence every year. To see the people in my community have that day, to really think about them and honour them.”

Although senior colour poster winner Hye In (Grace) Park of Langley, B.C., has been to Ottawa once before, she is excited to return. The purpose of remembrance, she said, is to ensure we do not become too confident and comfortable, and to ensure we do not forget the pain and suffering from past wars, to which she has a personal connection. Her grandmother fled from North Korea during the Korean War and started a new life in South Korea. “The stories she told me about the war were very devastating, [but] inspiring. I wanted to let others know about pain from the war,” she said. After the war, her grandmother met her grandfather, and the family eventually immigrated to Canada to start a new life.

This is her second time entering the contest, she said, having made it to the provincial level last year.  This year she was determined to make it further. “I put a lot of time really planning the poster,” she explained. “I was doing research…and I saw this picture of an older lady who lost her family in the war, and her look and the mood of the picture really inspired me to try to convey the sorrow from the war.” Park’s poster depicts an older woman, her head bowed down, with a Canadian flag draped around her. Two veterans are separated from her by a river, and the National Vimy Memorial can be seen in the distance. Her poster is a clear reflection of the suffering, separation and loss caused by war. 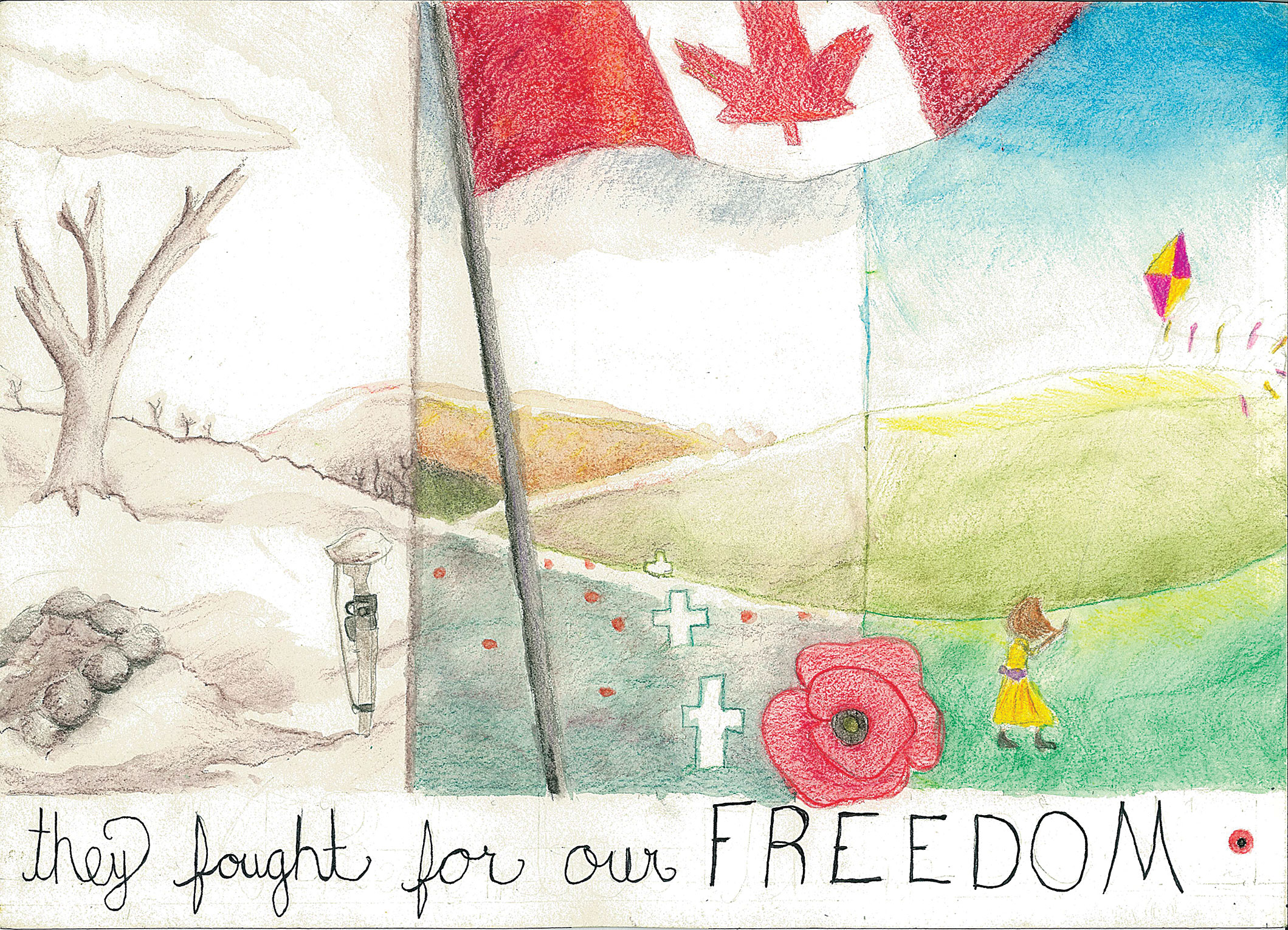 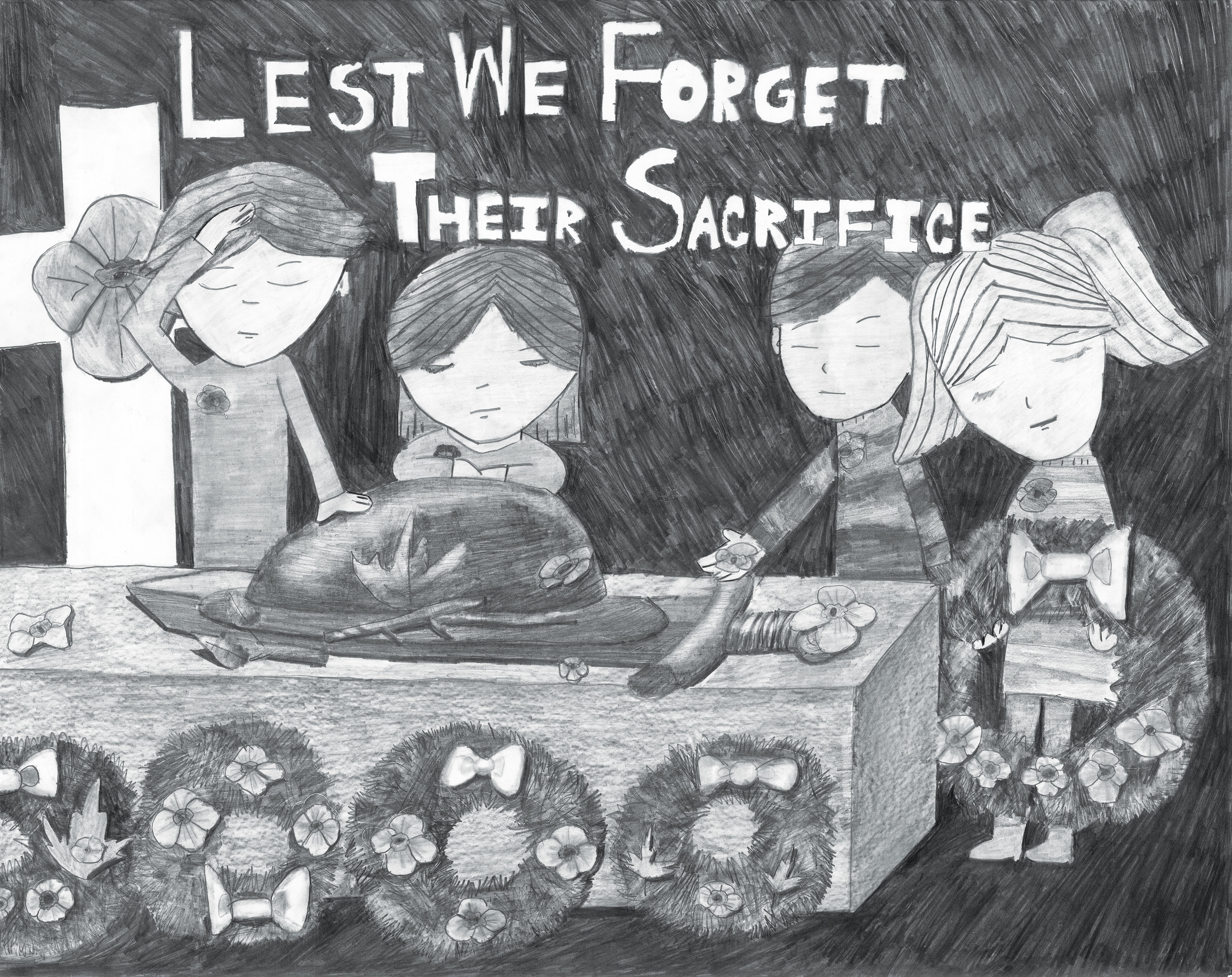 The winning posters in the junior categories are by Roisin Mullen of Mount Stewart, P.E.I. (top), and Karen Ki of Scarborough, Ont.

Beth Kirby of Cornwall, P.E.I., was also a second-time entrant of the Legion’s poster and literary contests. Kirby’s poem, “What a poppy brings to mind,” intricately examines each and every thought that goes through one’s mind when thinking about what remembrance means to them. “When it came to the poem, I wanted to look at all aspects of what people think about when they think about Remembrance Day,” she said.

When I pin the red flower above my heart

I think of the meaning it holds heavy on my chest.

I think of those who volunteered their futures for their country

All of them with different motivations, but all with one goal and purpose.

I think about sacrifice, about humanity and the loss of it.

I think about unmarked graves that do no justice to those buried in them.

I think about a mother’s tears and a father’s anguish.

I think about the fading memories a little brother has of his greatest role model.

Kirby especially wanted to touch on those who have returned home, seemingly fine, but suffering inside. “I wanted to think about people who are healing and people who still need healing…try to fit things in, mention  PTSD, people who can’t enjoy fireworks…and [have] nightmares.”

The inability to enjoy fireworks on days of celebration

The feeling of being abandoned by the country that they served.

She continues on, touching on moments of happiness, strength and courage. She demonstrates that remembrance isn’t always about sorrow, but about those moments when families are brought back together, nations reunited and broken pieces picked up and turned into something new.

But that’s not all I think about.

I think about joyous reunions and letters full of hope and love.

I think about rehabilitation and healing

About reconstruction that’s stronger than before.

I think about reconciliation and peace

But most of all I think about how incredibly thankful I am and will continue to be.

These thoughts flood my head and they will stick with me even when I’m not wearing this black-eyed poppy. 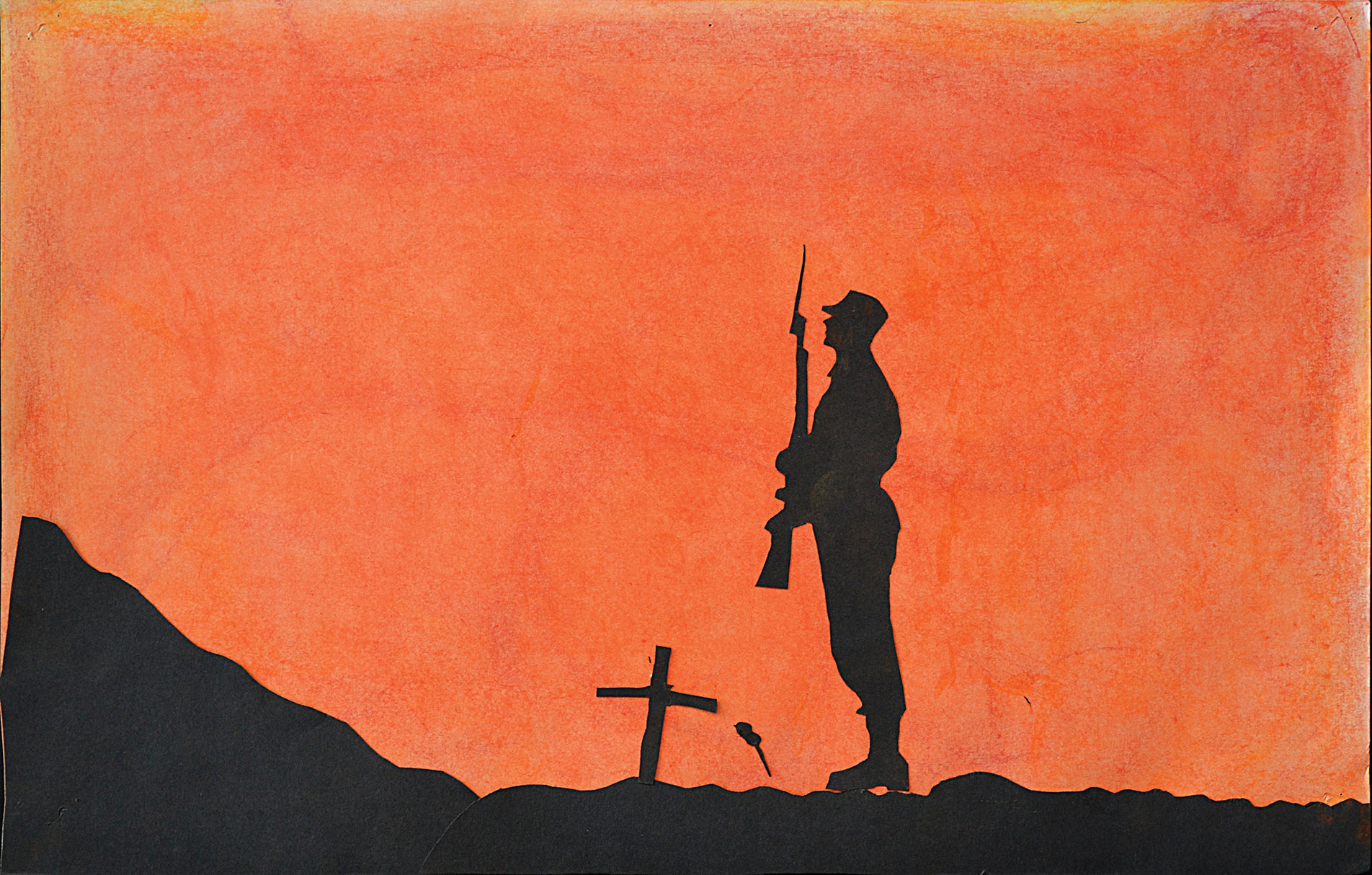 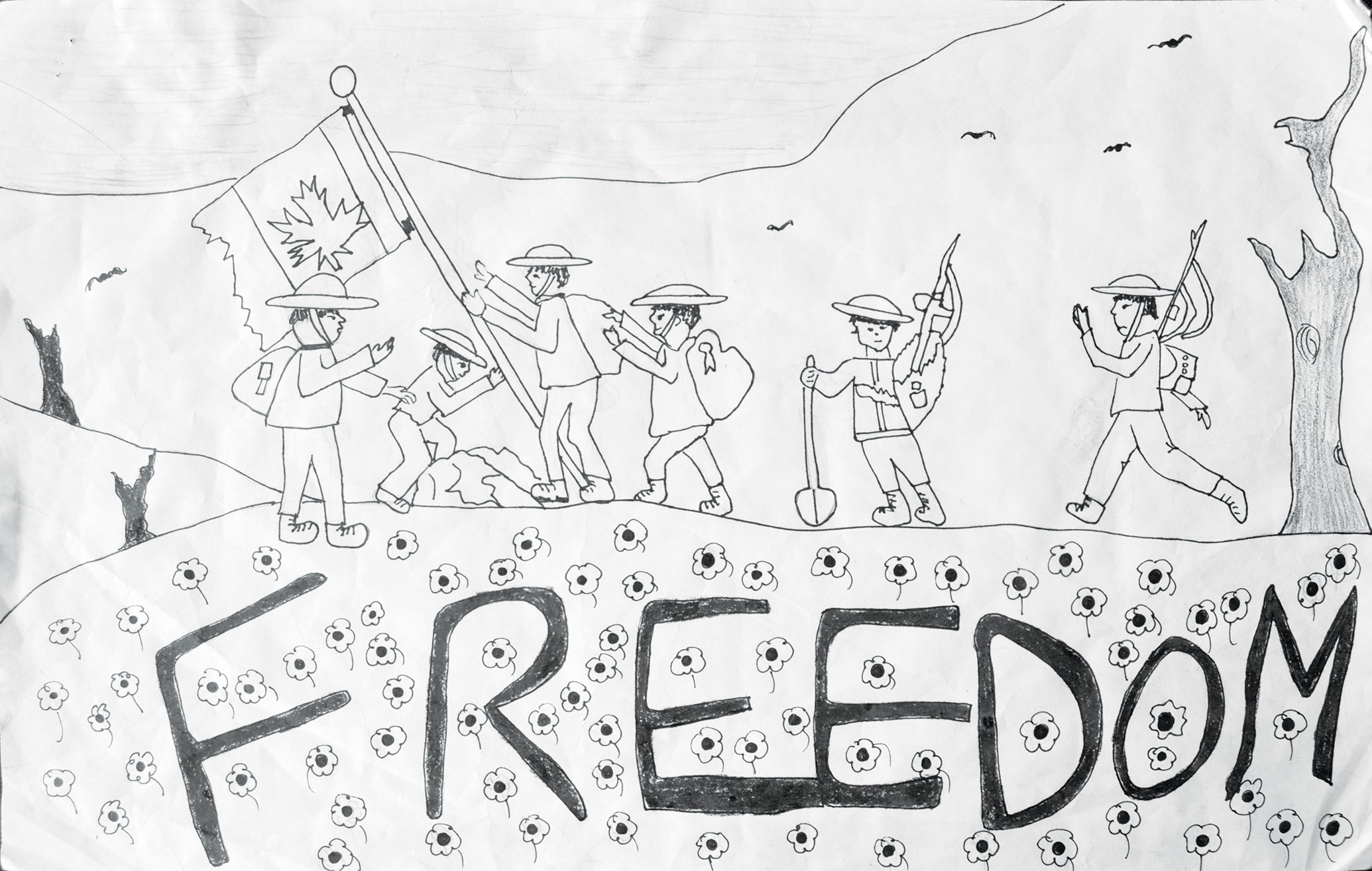 The primary categories were won by Scarlett Robinson of Lake Country, B.C. (top), and Charlie O’Hearn-Stone of Trail, B.C.

The Legion is sponsoring a trip to Ottawa for the four senior winners, where they will attend the National Remembrance Day Ceremony and place a wreath on behalf of the youth of Canada. They will also have an opportunity to meet with the governor general.

The winning entries are on display at the Canadian War Museum until May 1, 2018. The second place and honourable mentions in the poster categories will be displayed at Parliament Hill in Ottawa during the remembrance period in November.