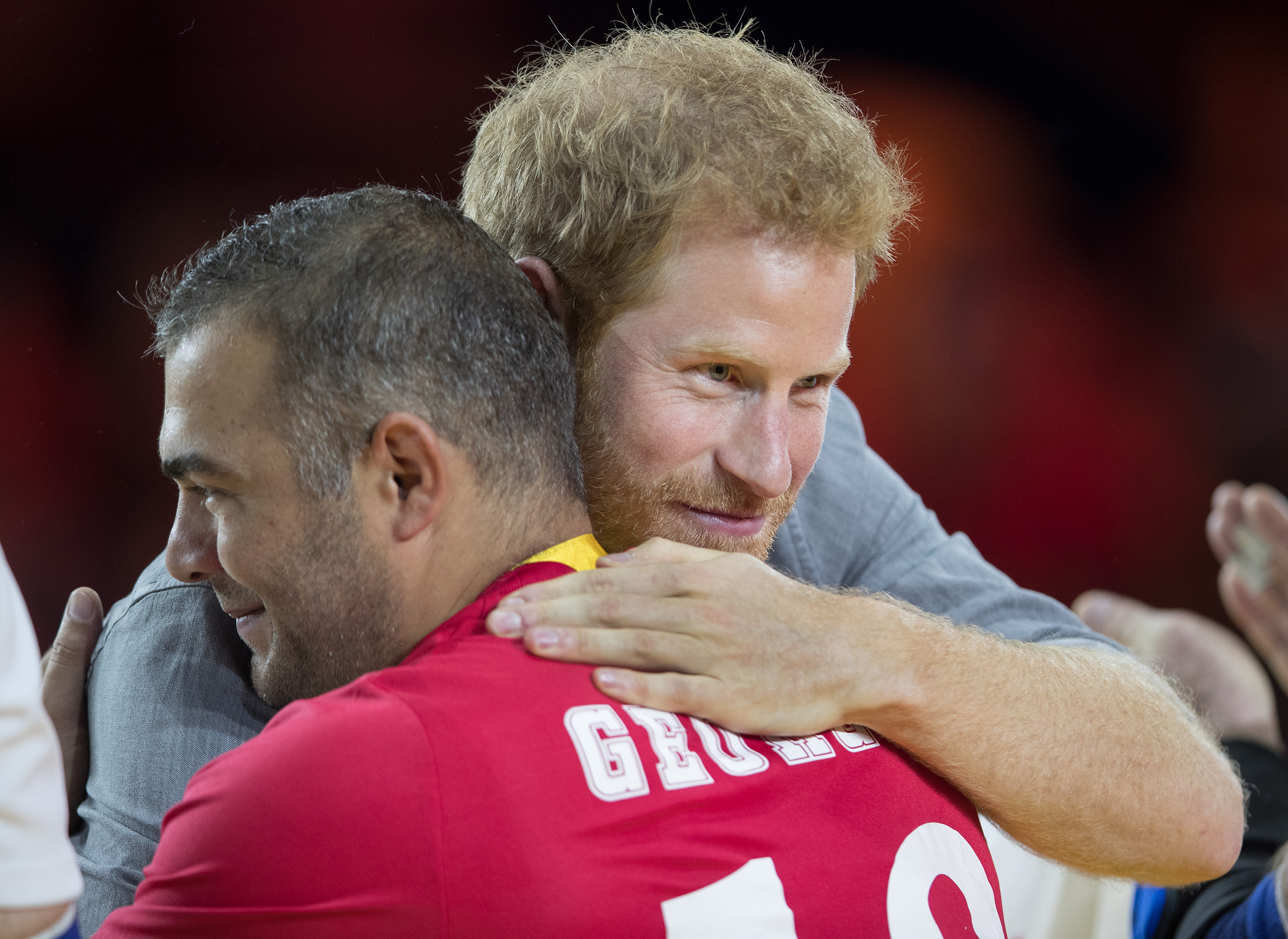 Prince Harry gives a Georgia team member a hug after awarding him the gold medal in seated volleyball at the 2017 Invictus Games in Toronto. Georgia defeated the U.K. in straight sets in the final.
Stephen J. Thorne/Legion Magazine
When it comes to the future of the now-annual event that he created, Prince Harry is an optimist—meaning he doesn’t believe there will be a perpetual need for the Invictus Games as we now know them.

Ideally, he suggests, the competition for sick and wounded warriors won’t be around forever, at least not in the form it is now. But when that change will take place, and what form it will take, are still up in the air.

“I’ve said many times before, Invictus has got a shelf life,” Harry told interviewer Brian Williams at the closing of the Games’ third instalment, in Toronto. “The conveyor belt of wounded coming back from war has ceased to a certain extent. 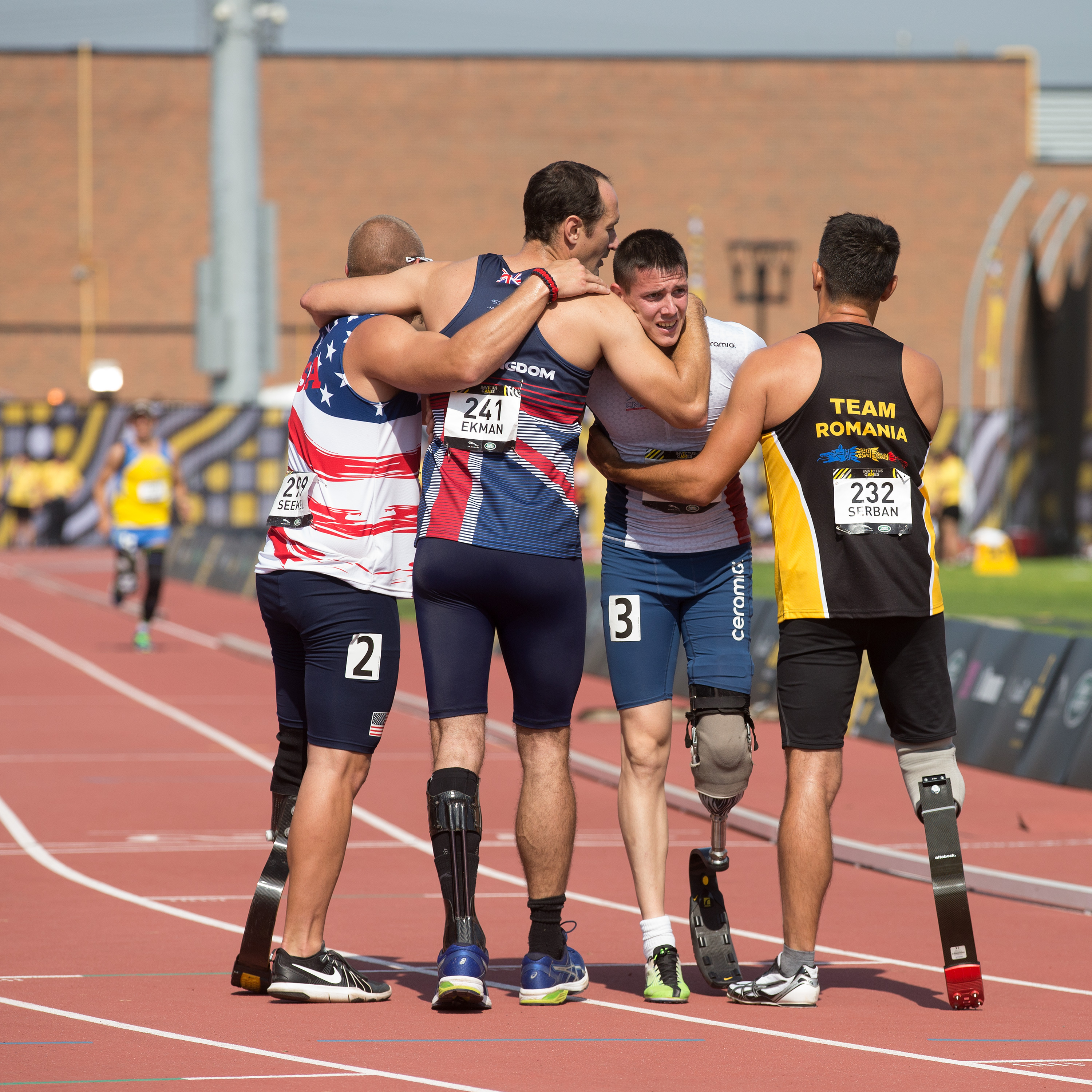 The winner of the men’s IT1 1,500-metre race, Bruce Ekman of the U.K, along with American silver medallist Ben Seekal and Romanian bronze medallist Laurentiu Serban greet fourth-place finisher Benjamin Atgie of France at the finish line.
Stephen J. Thorne/Legion Magazine
“But for us at the Invictus Games Foundation, it happens every year. We think we’ve made a decision and then we come to the Games and suddenly, boompf, you know what? We have a social responsibility here to continue this for as long as it’s needed.”

Indeed, the conveyor belt may have slowed but, if anything, the popularity of the Games is growing among both the athletes and the public. 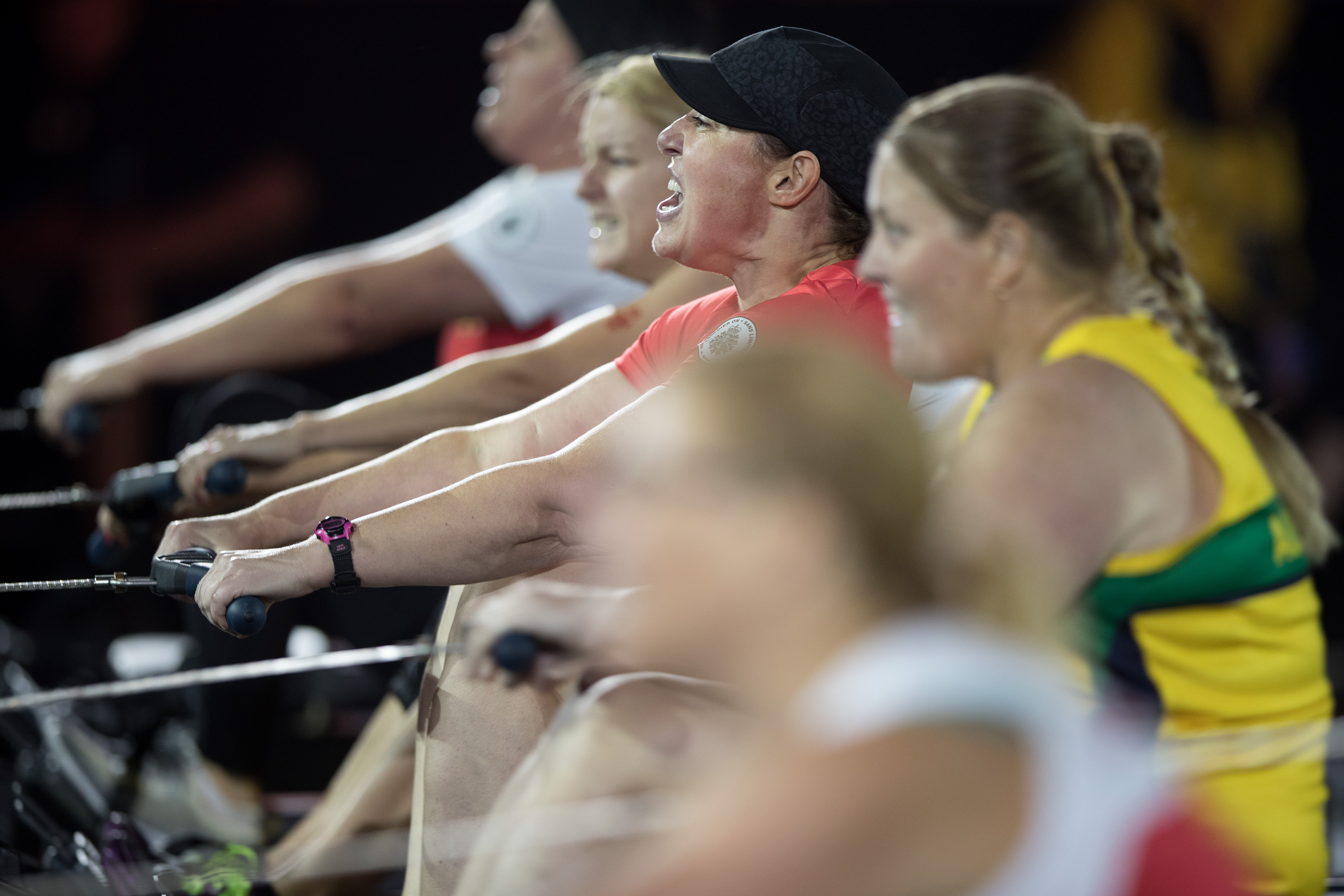 Canadian Jennifer Alexander competes in the women’s IR6 four-minute indoor rowing endurance race.
Stephen J. Thorne/Legion Magazine
The first Games, held in London in 2014, attracted about 400 participants from 14 countries. Last year, Orlando brought in about 500 athletes from 15 countries. More than 550 from 17 nations took part in the Toronto Games, with Romania and Ukraine participating for the first time. At least half a dozen more countries wanted in but couldn’t be accommodated. 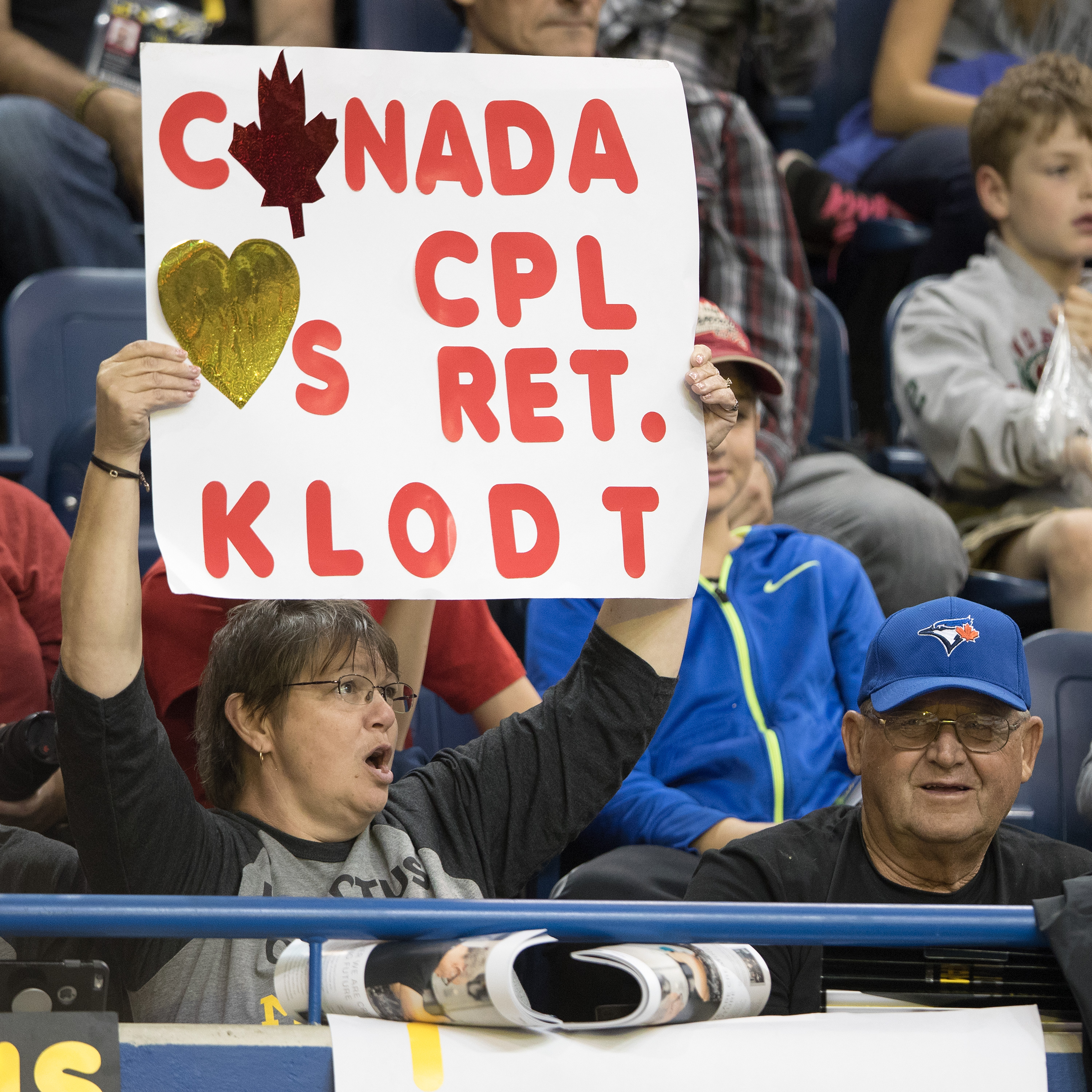 The Chris Klodt Fan Club.
Stephen J. Thorne/Legion Magazine
The Toronto Games were a complete sellout, from opening through the 12 sporting events and the closing, Chief Executive Officer Michael Burns said in an interview with Legion Magazine. More than 75,000 tickets were sold—the largest audience of any Invictus Games yet. 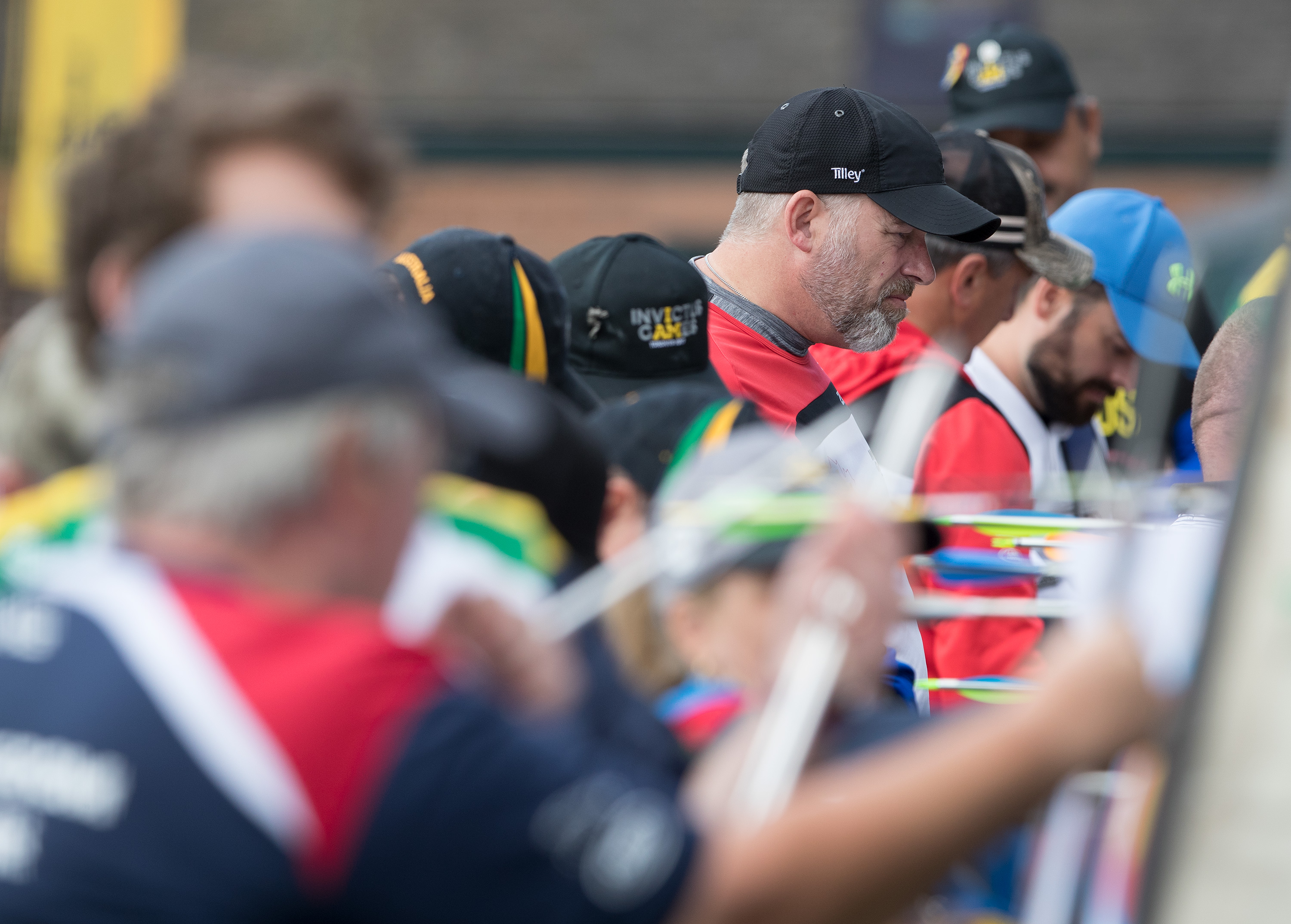 Canadian Joel Guindon surveys his work in the archery competition.
Stephen J. Thorne/Legion Magazine
Furthermore, more than two billion sets of eyes looked at news stories and other postings about the Games globally over the last 18 months. 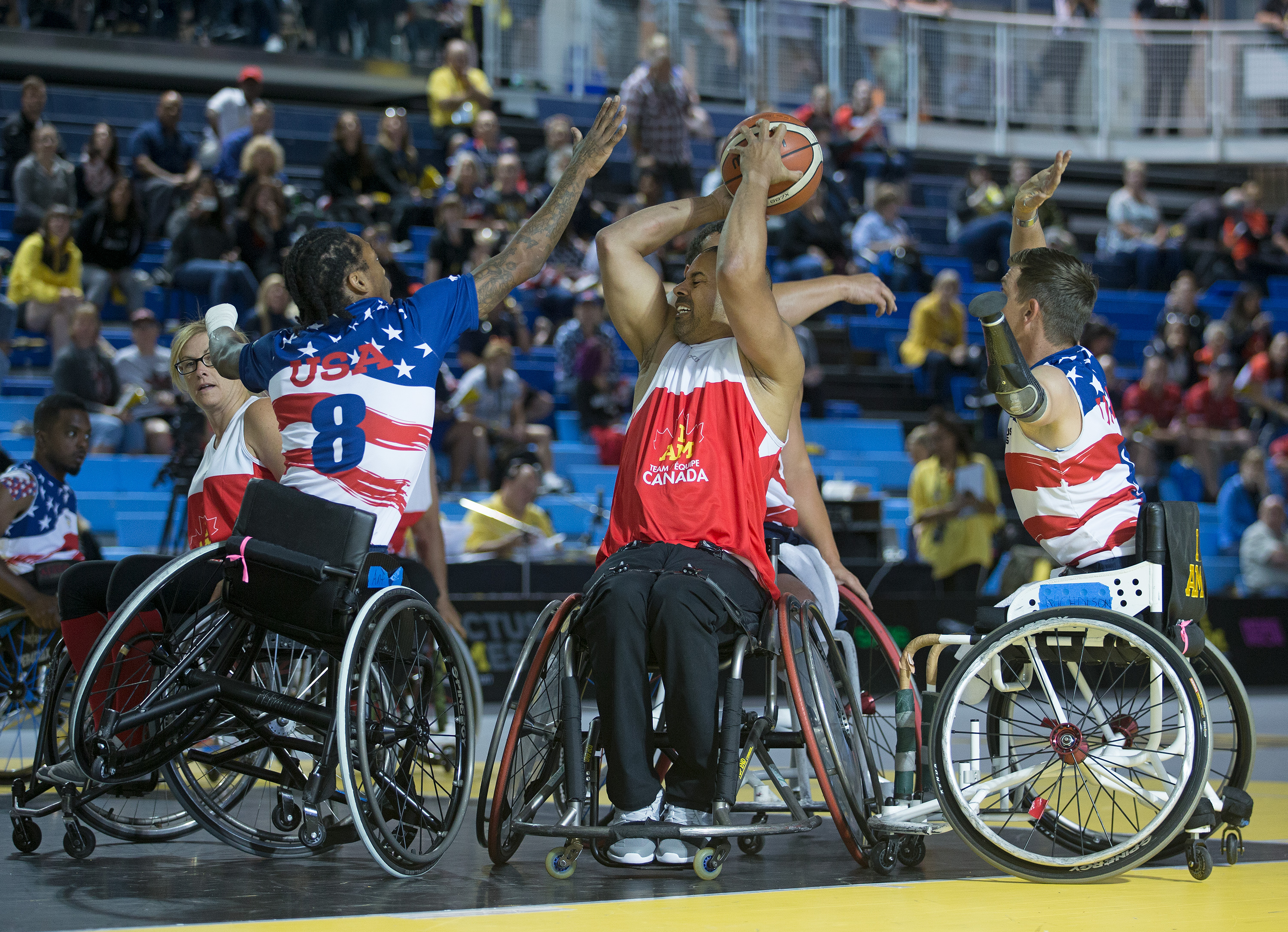 Steve Daniel, a former paratrooper paralyzed in a jumping accident, takes it to the Americans.
Stephen J. Thorne/Legion Magazine
For now, at least, there is no shortage of physically and psychologically damaged veterans to populate Games’ venues for years to come. The Americans and British alone could stage a Games of Olympian proportions, judging by the legions of amputees and others wearing their colours in Toronto this year. 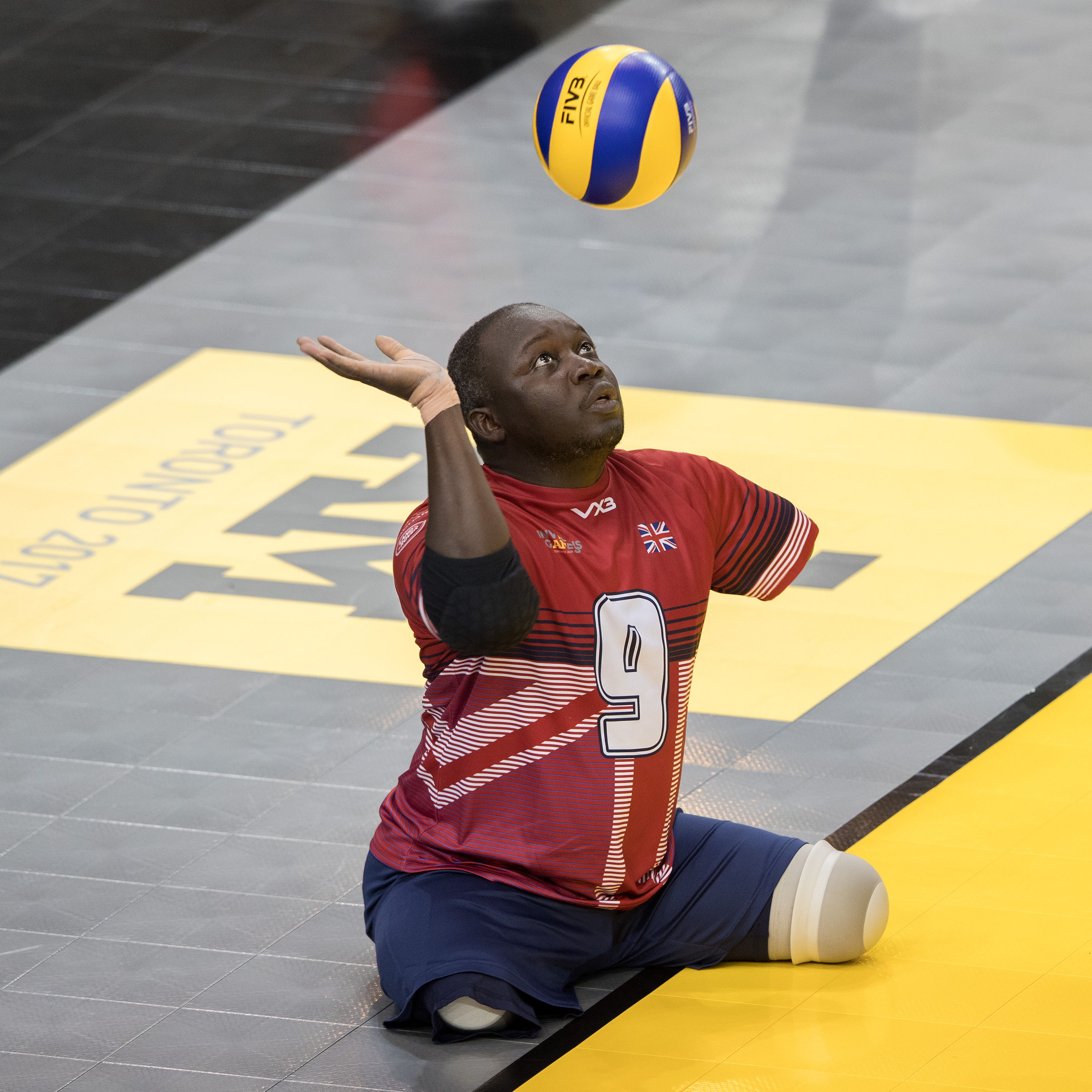 Triple amputee Lamin Manneh of the U.K. serves one up in seated volleyball play.
Stephen J. Thorne/Legion Magazine
In all likelihood, there are legions more who are not yet ready to make the commitment toward training and travelling. No doubt, the stories they’ll hear and the transformations they’ll see will bring more into the fold. 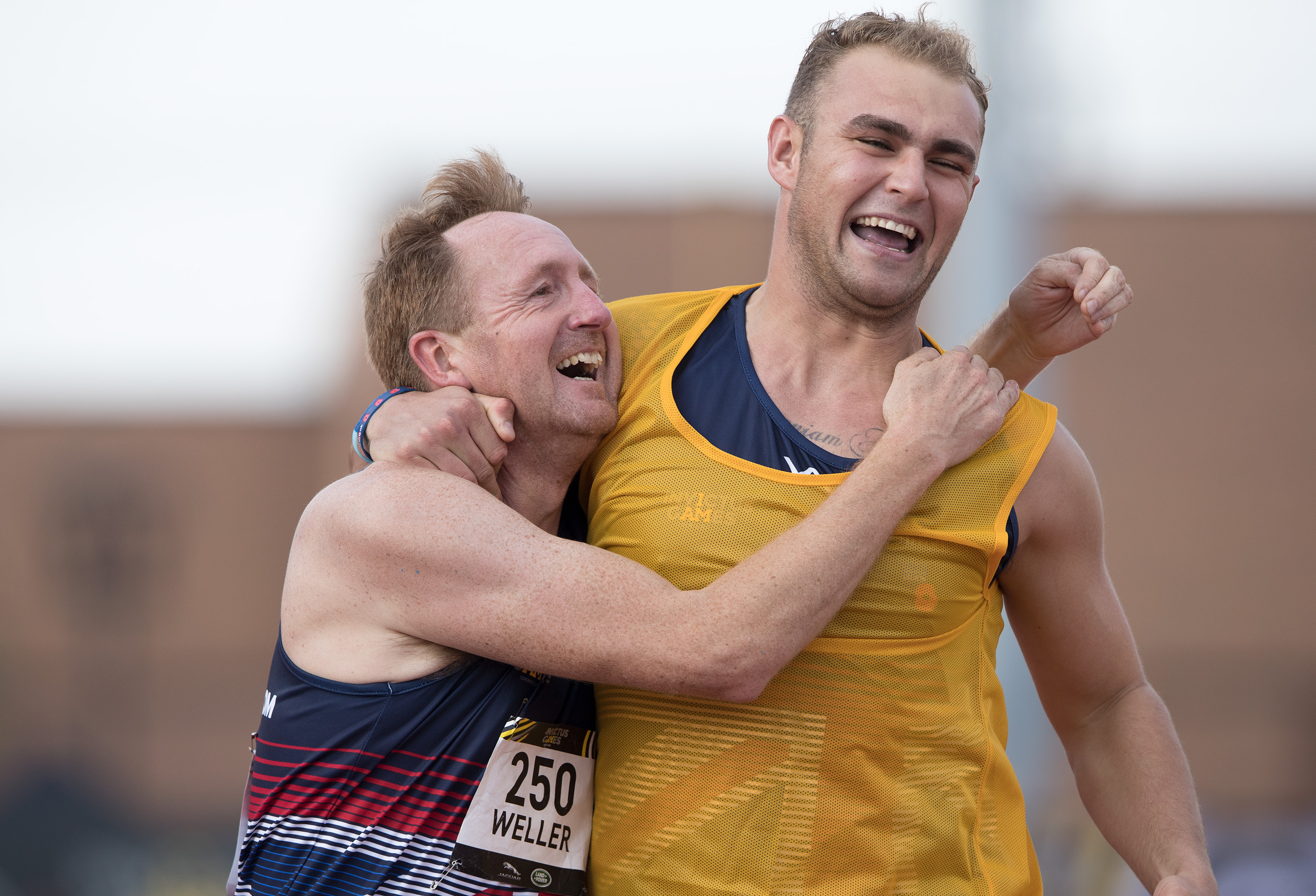 Britain’s Jamie Weller, who is visually impaired, embraces his guide after taking bronze in the men’s IT6 200-metre race.
Stephen J. Thorne/Legion Magazine
The Games are intended to get wounded veterans back on their feet, so to speak, by restoring their strength, both physical and psychological, along with their resolve, purpose and sense of self-worth. Ultimately, the experience aims to make them productive, contributing members of society again, not perennial Invictus competitors.

“We didn’t pick a team for medals,” team co-captain Simon Mailloux said after toughing out a 1,500-metre race on an artificial leg. “That wasn’t the goal and it never will be. We picked a team that needed healing, and we’ve done so much of that here.” 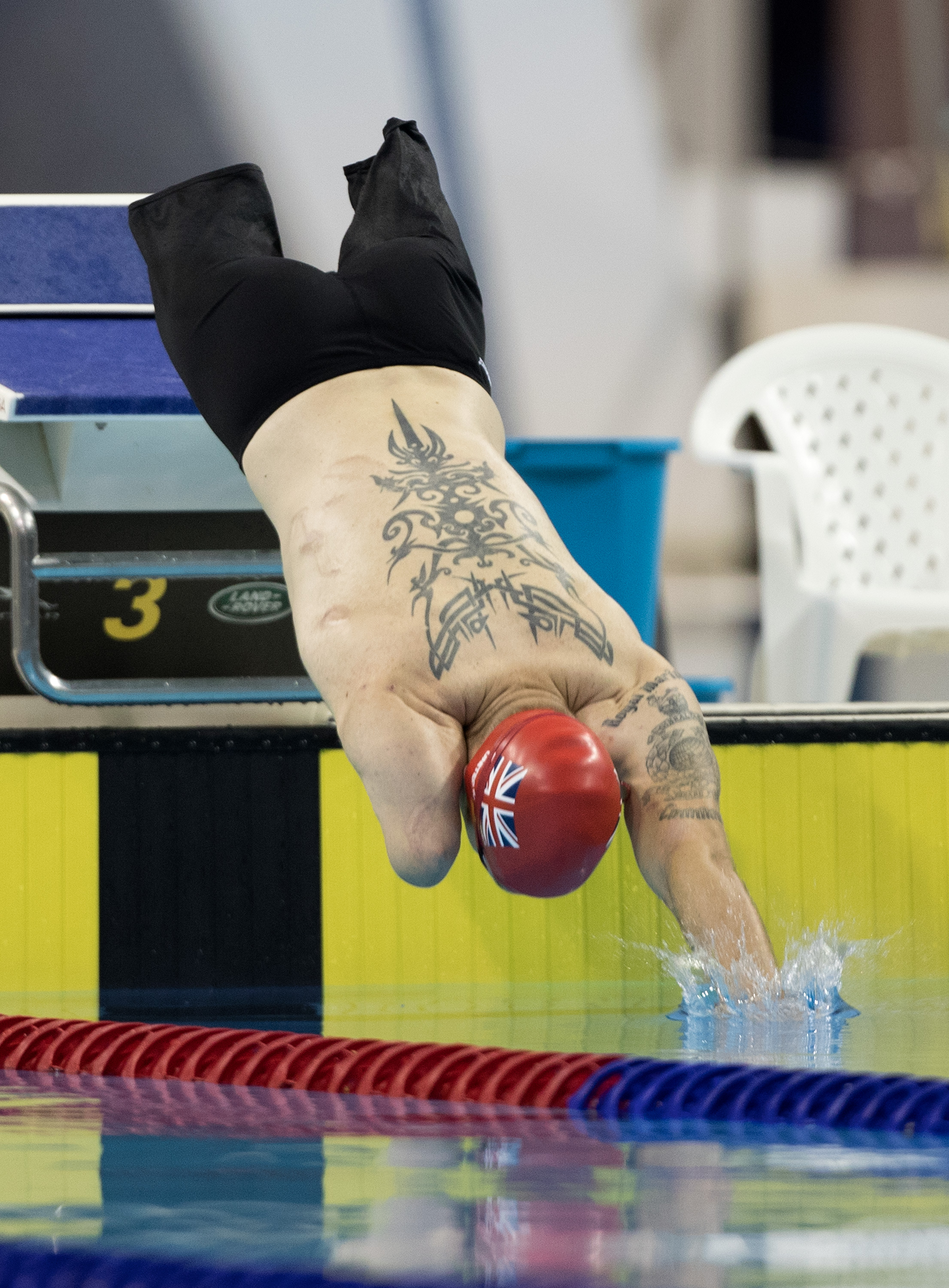 The U.K.’s Mark Ormrod won four medals, including bronze in the men’s ISA 100-metre freestyle swimming event. The performance earned the former Royal Marine the Games’ Exceptional Performance Award.
Stephen J. Thorne/Legion Magazine
For the vast majority of those who made the commitment, Invictus has been a life-changing—for some, life-saving—experience. “Transformative” is the operative word. 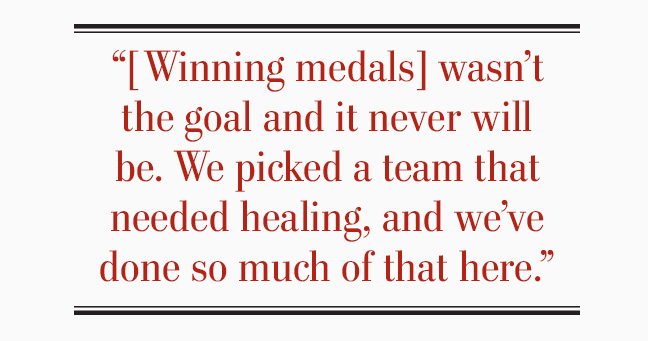 “They’ve got lots of friends. You see them on Facebook going on trips. It’s such a different world for them.”

And that was before the Games even started. 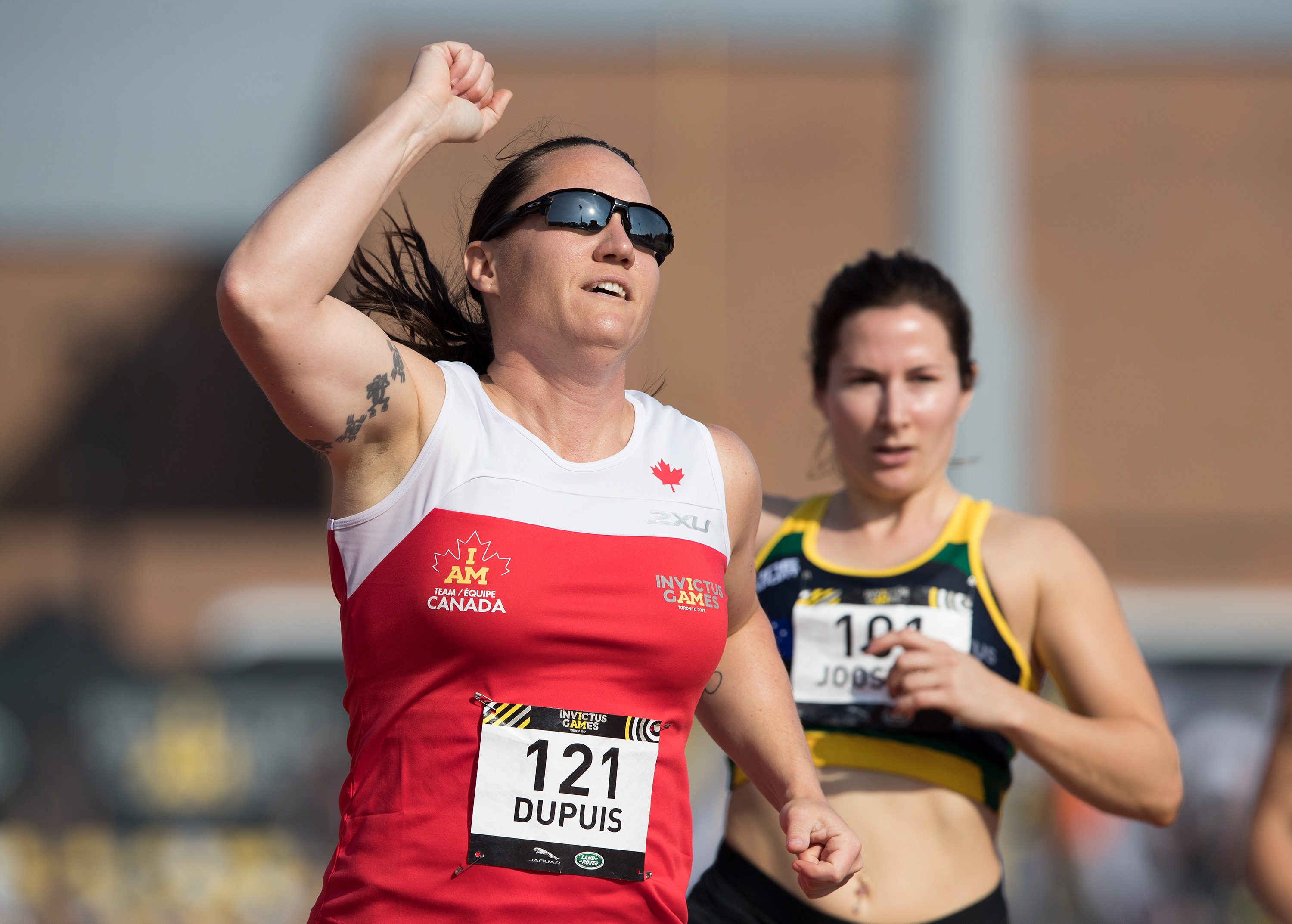 Struggling through a fierce battle with debilitating post-traumatic stress disorder, the medically retired corporal from the Royal Canadian Dragoons said Invictus gave her “the goal I really needed to take my life back.”

It’s what has made her most proud.

The opportunity to dedicate her efforts to comrades killed in Afghanistan and represent her country again, albeit in a different uniform, meant the world to her. “I never thought that would be possible,” Dupuis told Legion Magazine before the 2017 Games. “I thought I’d lost my career and everything, and here I was asked to represent Canada internationally, so I gave it all I had.”

As if to emphasize the point, a driven Dupuis won four more medals in Toronto, including golds in all three of her solo track events—the 100-, 200- and 400-metre—and a silver in the indoor rowing sprint.

Dupuis said the comradery, within the team itself and with their fiery but good-natured rivals, moved her profoundly and helped restore her sense of belonging. The Invictus Games are unique that way.

“It’s the only place I’ve seen last being cheered most,” she said. 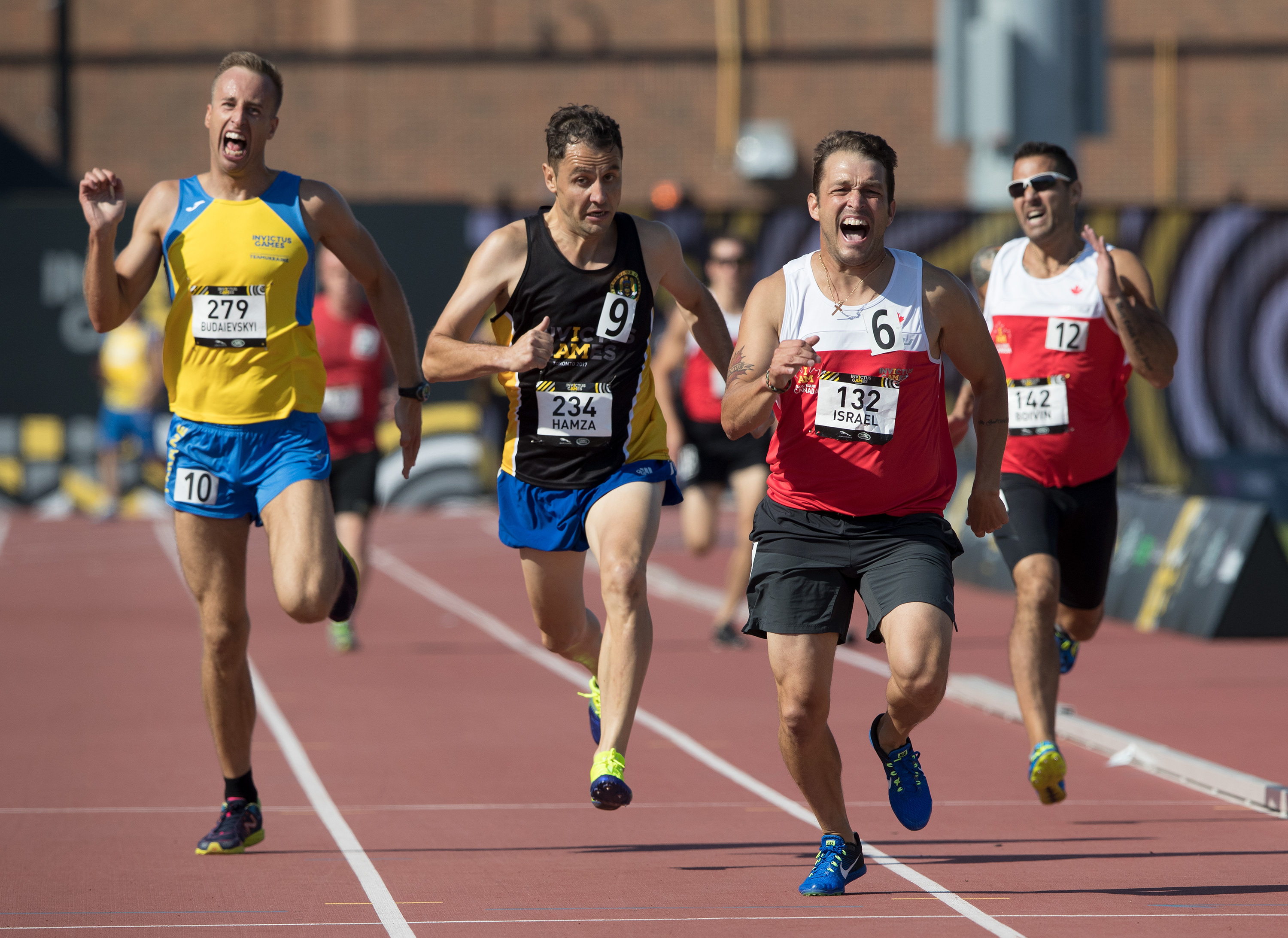 Canadian Jay Israel goes for the finish line in the men’s IT7 1500-metre race. Israel finished sixth while teammate Gorden Boivin (right) finished ninth. Ukrainian Oleg Zimnikov won.
Stephen J. Thorne/Legion Magazine
The 2018 Games are slated for Sydney, Australia. The foundation has made no announcement beyond that, though Burns says it’s likely they’ll end up back in the Britain in 2020. Beyond that? 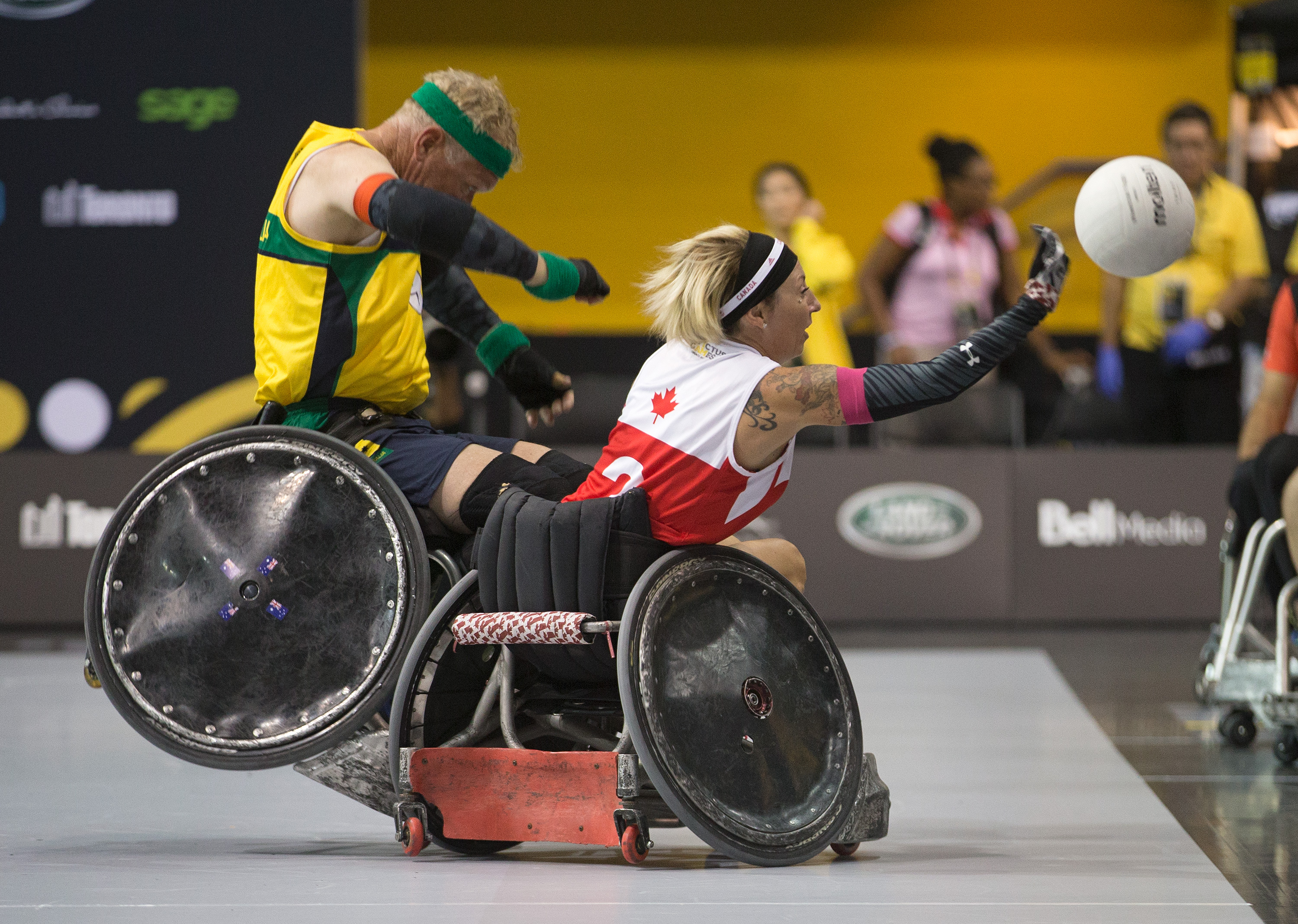 Canada’s Hélène Le Scelleur takes a hit from Aussie Daniel Jeffery in wheelchair rugby action.
Stephen J. Thorne/Legion Magazine
“And we all need to be reminded of what duty and service is all about. So it would be silly of us to close it down, but the shape and the form of it will change.”

The prince said planners have been bouncing ideas off some of the athletes. “The future looks bright,” he said. “It really does look very, very exciting. But we’re not talking about 2,500/3,000 competitors. It will be a gradual increase, if we can—these things, you know, cost money. 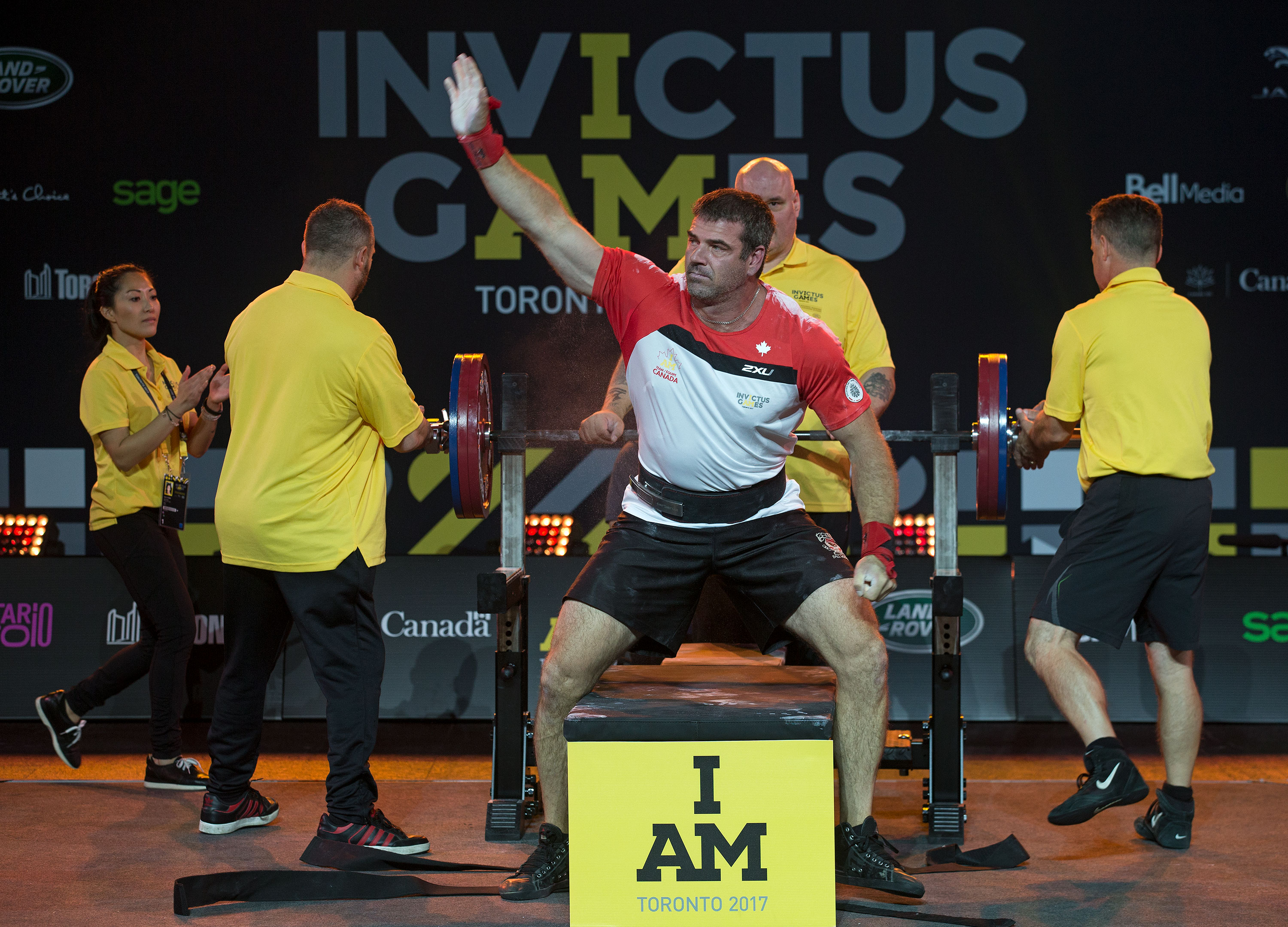 Canadian Bruce Matthews finished fourth in men’s heavyweight powerlifting.
Stephen J. Thorne/Legion Magazine
“But at the same time, it is impossible to say no; it is impossible to wrap something up that’s having such a massive impact on changing lives and saving lives.”

Where the Invictus program will go remains anyone’s guess but, rest assured, it will be linked to Harry’s credo, “once served, always serving.”