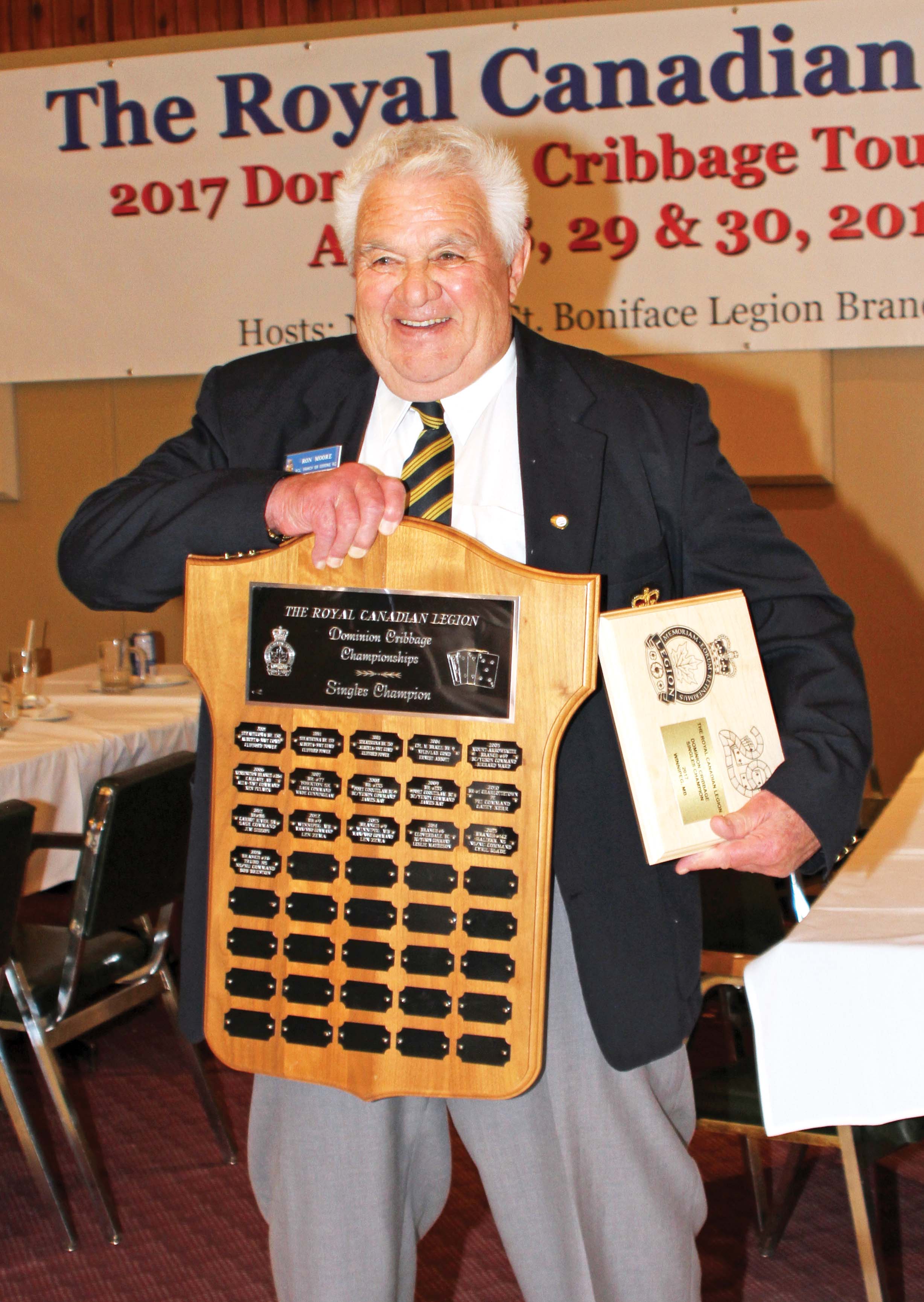 The excitement at the 2017 Dominion Cribbage Championships, hosted by Norwood-St. Boniface Branch in Winnipeg April 28-30, lasted right to the end of the awards ceremony, as players in the team event agreed not to post scores during play, nor have the winning team announced until the closing banquet.

It is common for scores to be posted at the end of each two-game set during round-robin play at the national championships. As it becomes clear which teams are vying for top spot, players and spectators mill around the scoreboard hashing out possibilities under which those coming from behind could come out on top. And thus it was during the 2017 singles and doubles matches.

But when the team competition began Sunday, tournament co-ordinator Faye Lavack asked teams if they would agree to keeping mum on the winners. They did.

The suspense heightened camaraderie, since no one knew exactly how well their team was doing, said Nova Scotia/Nunavut’s Lewis Conrad, from Mersey Branch in Liverpool.

Enthusiasm lasted the whole day. Players on the four-person teams, which are divided into two sections, did not know how they were doing against other teams, nor how the other half of their own team was faring. And finally, it sped up play; the team competition was the only one to finish in the time allotted. “I really liked it,” said Paul Calhoun of team New Brunswick. “It made us really concentrate more.”

Calhoun and his daughter Sandra LeBlanc, Roger LeBlanc (no relation) and Dean McLaughlin from Marysville Branch in Fredericton, won the team competition with 35 points, 20 of which were won by the father-daughter pair. “We couldn’t have done much better,” Calhoun said. “We had an amazing day, couldn’t do anything wrong,” said Sandra.

But at the start, Roger LeBlanc and McLaughlin were trailing badly. “The first four games were something else altogether,” said LeBlanc. “We got double skunked by Nova Scotia and lost by 84 points.” They proved a bad start does not necessarily signal a bad finish. 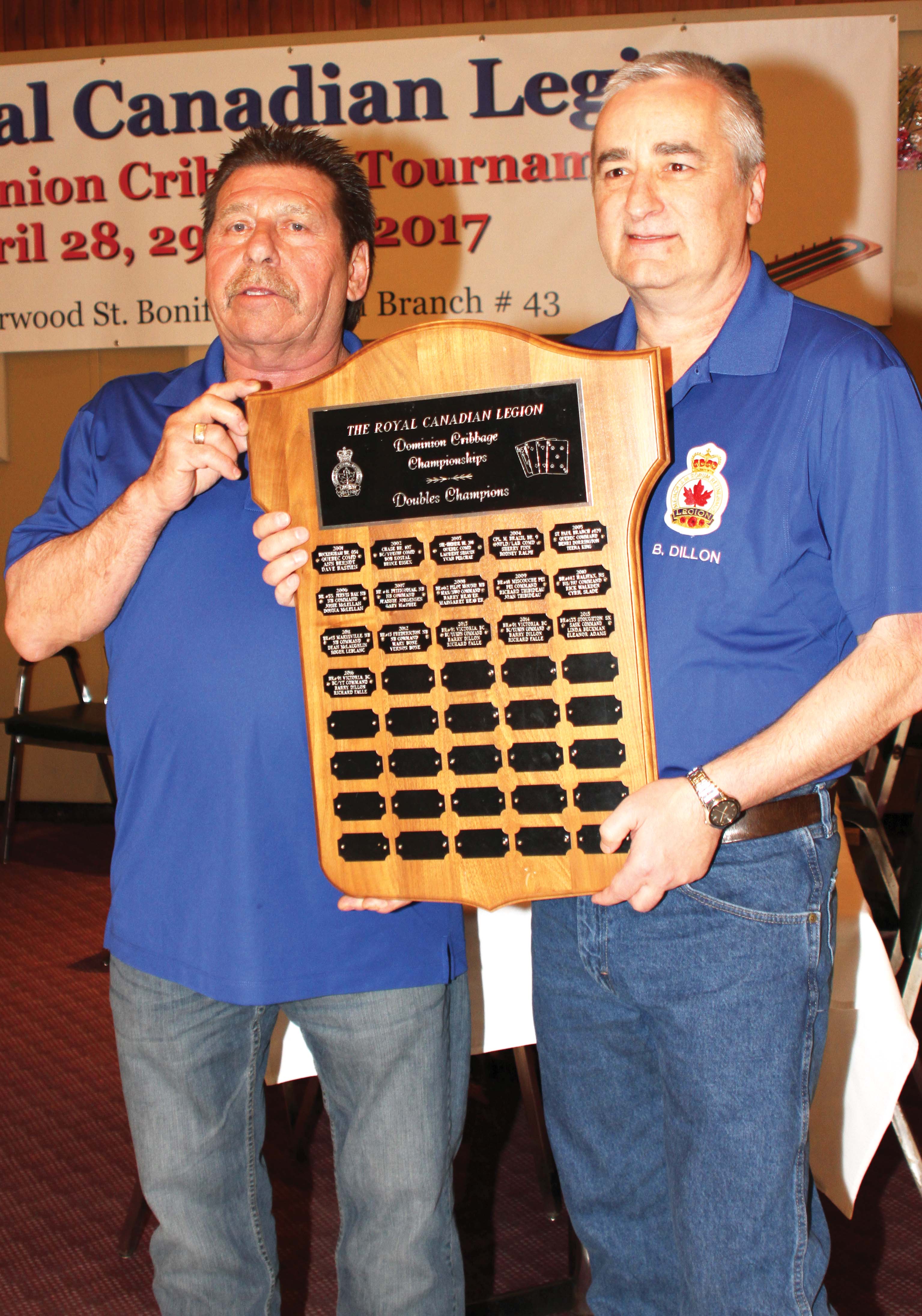 The runner-up, with 24 points, was Nova Scotia/Nunavut: Bruce Clattenburg, Gwen and Lloyd Lowe and Lewis Conrad of Mersey Branch in Liverpool.

It took four sets for leaders to emerge in the doubles match. Arnie MacAskill and Dwight Baird from Lacombe, Alta., Branch, in their second nationals, were in the lead with eight points, thanks to two skunks against Dwight Moore and Leslie Watson from Kenora, Ont., Branch in Manitoba-Northwestern Ontario Command. But Barry Dillon and Rick Falle of Prince Edward Branch in Victoria and Roger LeBlanc and Dean McLaughlin of Marysville Branch were only one point behind.

“It seemed every time we lost the cut, we won the game,” said MacAskill. “And then we started winning the cut.” And losing games. Skunks in sets five and six put B.C./Yukon in the lead, while MacAskill and Baird stalled at 11 points.

Coming out of set eight, New Brunswick, with 14 points, was only two behind B.C. But in the final set, the team scored but a single point, while B.C. pulled off a skunk to count three.

“In first place is B.C./Yukon, with 19 points,” announced Lavack, who was also Local Arrangements Committee chair and is branch president. Then she added: “I need to take that back,” she joked, “because everybody knows there’s no 19 in crib.”

It is the fourth time in five years that Barry Dillon and Rick Falle of Prince Edward Branch in Victoria have walked away with the doubles title.

“We’ve been playing together seven, eight years,” said Falle. “We play the same style of cards, so that’s why we win,” Dillon said. But he looked at the board and added: “No goose eggs, that’s the trick; if you look at the scoreboard, everybody got goose eggs [zeros] except New Brunswick and us.”

There were plenty of goose eggs from the start of the singles competition Saturday afternoon. Ron Moore of Gibsons, B.C., Branch and Clattenburg of Mersey Branch both scored a healthy four, thanks to two skunks against their opponents in the opening set. For most of the match they were either tied for lead or within one point of one another. After six sets, they were tied at 12, their nearest competitor, Dave Lane of East Toronto Branch, trailing by three points.

In set seven, Clattenburg pulled ahead by two points when Moore blanked against Lane, but in the next set, Moore pulled off two more skunks to surge ahead to 16. Clattenburg was still within range of a win, if he could score two skunks while Moore blanked or scored one. But it was not to be. Final score: Moore 17, Clattenburg 14, tied with New Brunswick’s Sandra LeBlanc. 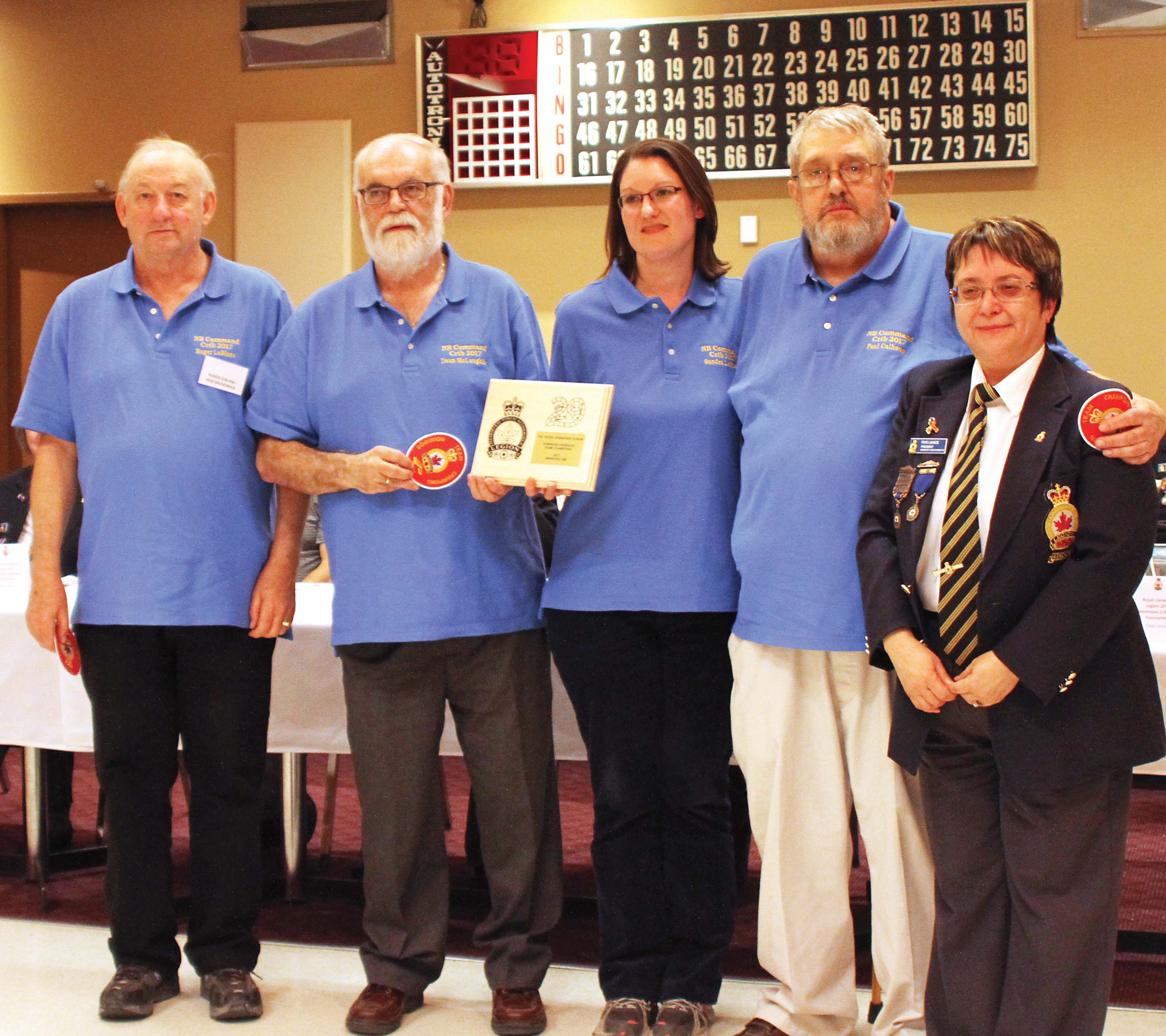 Moore, 81, was elated. “This is the very first time I’ve played the Dominions,” he said. “They are pretty competitive here. They are very good.”

Competitors ran the gamut in experience. Theresa Gallant, who was tournament co-ordinator for the 2016 championships held in Charlottetown, and her husband Paul, both of Wellington, P.E.I., Branch, were also competing nationally for the first time.

Doreen Rourke of Montcalm Memorial Branch in Rawdon, Que., was enjoying her second trip to Winnipeg; she emerged a 1999 team champion after her first visit, but has had no wins in four other dominion competitions. “This is my third time, and I’m still not a winner,” said her teammate, singles and team competitor John Garner. “Together we have more than 300 years of experience,” he joked at the banquet, “but it didn’t help as I’d hoped.”

“There are more than 20,000 crib players in the Legion, and you are the cream of the crop from right across Canada,” said Dominion Command Sports Committee Secretary Danny Martin, bringing greetings from Chair Angus Stanfield. “We want to congratulate everybody here.”