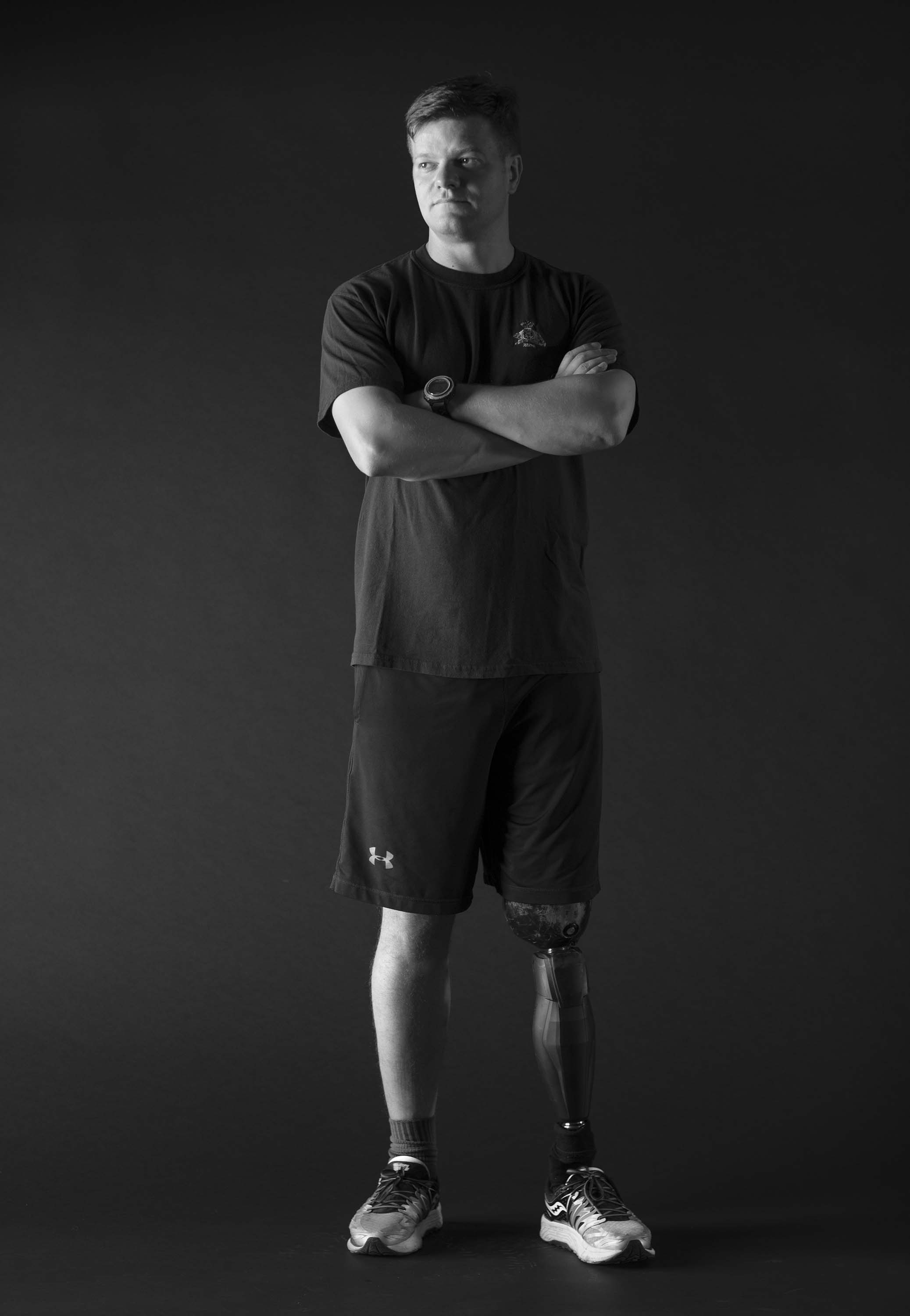 “The person who put that bomb under our vehicle and blew it…did not defeat me,” says Simon Mailloux

He was in history class when everything stopped as students and teachers alike watched the twin towers come down.

“Some people started talking about how we should start putting sandbags in front of the place and crazy talk like that,” he recalls. “But we discussed it later on, the implications of it. We didn’t know who did it but [we knew] Canada was going to get involved.”

The Quebec City native had no doubt it would have implications for his budding career.

“You joined the army because you knew you were going to be deployed by the government when it matters, or you hope so, and definitely that was a turning point.

“We became focused on something else. Before, it was the Cold War. After that, it was fixing the world. And now it has become more about protecting Canada and protecting our allies.”

But Mailloux, then 17, would have to wait. He did a year at Fort Saint-Jean, then four more at Royal Military College in Kingston, Ont., all the while champing at the bit to get into the fight before it was over. He graduated with honours in 2006, joining Para Company, 3rd Battalion, Royal 22nd Regiment.

He would later go on to complete a master’s degree in military and strategic studies.

During infantry training at CFB Gagetown in New Brunswick, they would watch the news reports out of Afghanistan, asking repeatedly: “When’s our turn?”

Mailloux’s turn would come, in spades. As a young lieutenant, he was assigned a platoon right out of training and shipped off to Afghanistan, where he led soldiers into battle with the Taliban over and over and over again.

Continued from MHM e-report No. 27

“It was the chance of a lifetime,” he says. “I realize it now. I thought then that every officer did that. Commanding soldiers, in spite of everything, was the best experience of my life.”

Eventually, Mailloux found himself commanding a forward operating base in Sperwan Ghar, southwest of Kandahar. About 120 soldiers, including his 36-member platoon, spread thin, covering two districts in the volatile Panjwaii District.

“I was 24 years old,” he says. “I made decisions over there about life-and-death things that you don’t think you will ever do. I had a lot of firepower at my command.

“You try to do your best and you’re fighting an enemy that is always invading and fading into the population. That’s a tough one. You’re always trying to balance having so much firepower and always trying to pinpoint it to the right place at the right time. That’s the hard part.

“Finding an enemy who is wearing a uniform, I feel, would be easy now.”

The enemy always knew where the allies were; the allies rarely knew exactly where the enemy was, until they opened fire. Mailloux’s troops came under rocket attack regularly and fought ambushes day and night, many of them hairy.

“It’s a long job. It’s demanding. But you always have to be up for it.”

He had lost his first soldier, Private Simon Longtin, to an improvised explosive device (IED) at the outset of an ambush on Hyena Road in August. Longtin, a 23-year-old native of Longueuil, Que., was the first Royal 22nd member killed in Afghanistan.

Mailloux had met Longtin’s mother before departure. He saw her again later on. She was devastated.

“We’re all a big team over there, but whenever one of us gets injured or killed, it has a ripple effect back home. It’s something you have to do. It’s your job, but that doesn’t make it easy.

“Standing there by the Hercules aircraft with my warrant next to me, the two of us right there with the flag-draped coffin passing in front of us, I felt so alone. You question everything you did. You ask yourself if you can keep going, but you have to. After that, you dismiss yourself, get back in the [saddle], and you gotta go.

It was Nov. 17, 2007. Mailloux was just back from three weeks of leave, which he had spent back home with his girlfriend. They were launching a major combat operation and he was “really eager to get in on this one.”

“My boss told me I was going to command the vanguard, be at the front with this force package of tanks, engineers, infantry and push forward.”

After delivering some last-minute orders to his troops, Mailloux and his unit mounted up and left the forward operating base a little before midnight. They were two kilometres out when Mailloux’s armoured vehicle hit a remotely detonated IED. He was in the sentry hatch in the back.

“I just felt a big wave of heat. There was an explosion. And it was lights out after that.”

When he awoke, he was being dragged along the ground. He felt like he’d been “punched by a hundred people and my leg felt like spaghetti, it was so numb.”

Through swollen eyes and face, he saw the back of his LAV; the tailgate was missing and the interior was catching fire. He caught sight of two bodies inside and troops fighting past the flames to pull them out.

His medic, Nicolas Beauchamp, 28, and his signaller, Pte. Michel Levesque, 25, were dead, along with the Afghan interpreter who had just joined them five minutes earlier. Mailloux never knew his name. He and two others were badly wounded.

They were rushed to the nearby Ma’Sum Ghar forward operating base. As they carried him to the helicopter that would evacuate him to Kandahar, Mailloux shouted to his dejected-looking platoon, “Give me two weeks, I’ll be back.”

He still had his left leg when he arrived at the base. His jaw was broken.

They operated, resetting broken bones and transferring veins from his right leg to his left in an attempt to restore blood flow to the damaged tissue.

He was flown out with the other wounded to the U.S. military hospital at Landstuhl, Germany. There, Mailloux would lose his leg through the knee.

When he came to, it was a rude awakening—not just because of the loss of his leg or the ensuing pain, but due to the contrast between the life he had just come from—in the desert, where he was the very tip of the spear—and the life now faced—naked, in pieces, his survival in the hands of strangers.

“I didn’t remember most of it, so I felt like I’d been robbed.” Robbed of his leg and, now a patient and not a fighting soldier, robbed of his identity.

There were dark times. He didn’t know what his future would be.

By Christmas, he was home. One day, he went out shopping with his girlfriend, in a wheelchair. People were staring, and it wasn’t pity in their eyes, it was discomfort.

“It was the holiday season, so it was twice as bad,” he recalls. “And there were many people, and they’d move away as you passed. I got so angry, suddenly I was not accepting that person they wanted me to be or they perceived that I was.

He started rehabilitation, taking it one stage at a time—fittings, learning to stand, learning to walk. He became aide de camp to then-governor general Michaëlle Jean, serving at her side for more than a year, travelling and recovering.

He learned to run and started participating in adaptive sports, eventually co-captaining the Invictus Games team headed to Toronto this fall, where he’ll compete in track as a sprinter.

“To be honest, you have to learn to be a person again,” he says. “But that’s just a start. That’s usually where most people stop; they go back to work. I had to learn to be a soldier again. It takes time.”

He missed a promotion and was still a lieutenant. He wanted to move up the ladder but he wasn’t sure the military, which wasn’t promoting the wounded, was thinking along the same lines. “I didn’t want to fade into the ranks; I wanted to be up front and show them.”

His time with the governor general afforded him good visibility and the stage on which he could prove his mettle. He made captain in May 2009, went into workup training and re-deployed to Afghanistan.

He was ordered to stay inside the wire with the brigade planning group, but within two weeks he was out on patrol. He served the full nine-month deployment.

“I closed the loop,” says Mailloux, now a major commanding 100-plus members of Alpha Company, 3rd Battalion, Royal 22nd Regiment. “The person who put that bomb under our vehicle and blew it with the intent of killing and maiming Canadians, at least he did not defeat me.”

As an amputee, you have to fight people’s perceptions and the easy path they seek to set out for you, he says.

“Accept the pain. Accept the hardships, the challenges. And, honestly, you have to want to trail blaze. You have to be a bit adventurous, a wee bit crazy and have a vision of what could be, of what is possible.

“Many, many people have a preconceived idea of what an amputee is, what they can and cannot do. So not only did I have to prove to myself I could do it, I had to prove it to everyone else.”

He’s never forgotten the soldiers he lost, and never will. Their deaths have tempered any feelings of triumph. In 2010, he married the girl who was his “rock” throughout his ordeal, Kari Pries from Kitchener, Ont. They now have a four-year-old daughter.

Mailloux was fighting floods in Montreal and Laval in May. Now he prepares for a major exercise next spring and awaits his next deployment, perhaps to Africa or the Baltic.

“Life throws curveballs at you all the time,” he says. “I love serving. It’s the best job in the world. Now, to command a company again on deployment would be the pinnacle. I think you’re never really fulfilled.”