Home » Health » Invictus Games » Last in the order of march

Last in the order of march 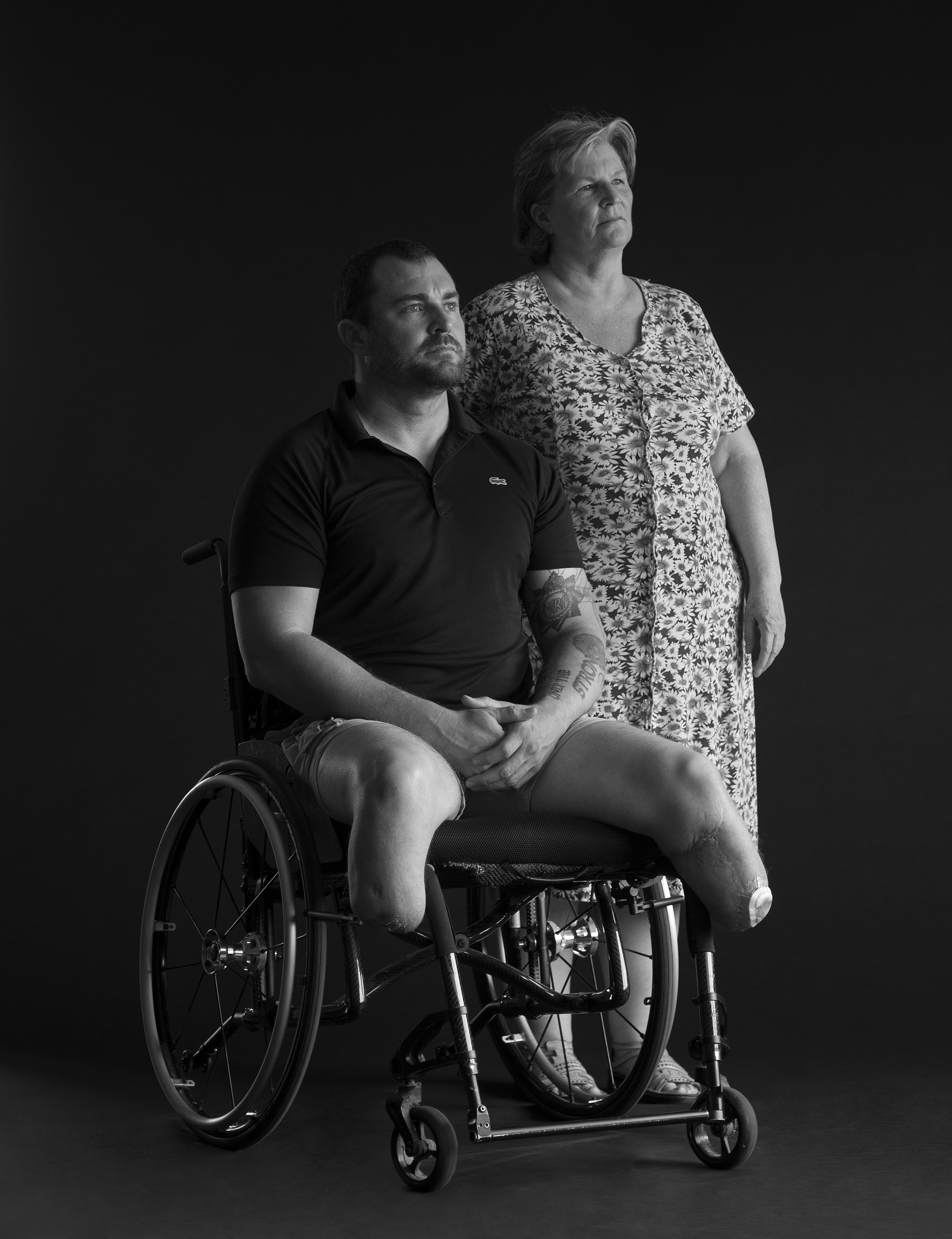 Her son Jody, a master sniper and a seasoned master corporal with 1st Battalion, Royal Canadian Regiment, had been wounded in Afghanistan.

Actually, the first call came from Mitic himself.

Despite having stepped on an Italian-made anti-personnel mine, which had been planted on top of a Russian-made 82mm mortar shell, he sounded lucid and composed during his brief message.

He’d already lost his right leg below the knee and was headed for the first of numerous surgeries, this one to amputate what remained of his left foot.

But he didn’t tell his mother that. 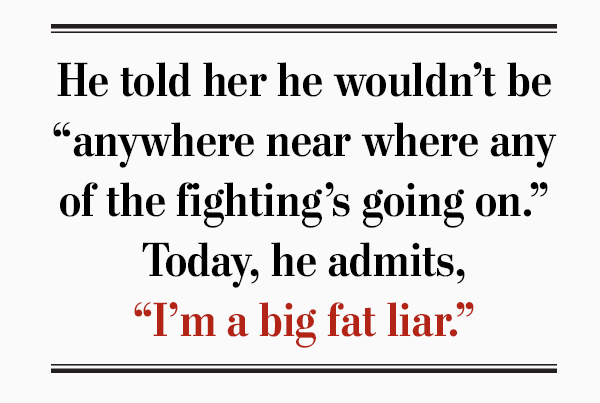 “I was out doing errands,” she said, “I came home and there was a phone message from Jody, very downplayed, saying ‘Mom, I’ve been hurt but it’s nothing serious. Don’t worry.’”

An hour later, Joanne Fisher-Mitic got the rest of the story from a duty officer back in Canada.

“He told me right over the phone,” she recalls. “I just fell to the floor. And then, a couple of hours later, the same guy called and said they had amputated his other foot.”

One of her worst fears had been realized. The divorced mother of three was alone at the time. A friend of her son came by her home in Brampton, Ont., a little while later.

“I was in shock,” she says. “I just remember being totally dazed. It just broke my heart.”

Jody Mitic had joined the reserve at 17. It was 1994 and, despite waves of misgivings, his mother signed the necessary papers allowing him to do so.

“I was part of the hippie generation,” she says. “I was all about peace and love and non-violence. There were no toy guns in our house. But he was pretty determined; he went and did all the paperwork, got it all set up, and presented it to me.

“I was so impressed with his tenacity, going through all the red tape and enlisting, that I thought ‘Wow, if you want it that bad, you deserve to have it.’”

Her grandfather, father and brother had all been in the military, so she wasn’t totally unfamiliar with the life. Still, the career her son had chosen, the job he would inevitably do, and the risks he would undoubtedly take, gave her pause.

The memories of Vietnam, the nightly television images of that ten-thousand-day war, the relentless protests of the 1960s, and the bitterness and rejection with which its veterans were treated were still fresh.

“It was a huge movement in my age group, especially among the women: ‘Guns are bad; any type of violence is bad for society and we need to evolve into a more peaceful society.’”

The risk factor didn’t really figure in her thinking at first. Canada, after all, wasn’t fighting any wars. Or so she thought. The Medak Pocket and other so-called “peacekeeping” incidents were under her radar, and that of many Canadians.

“We were peacekeepers,” she says. “If anything dangerous was happening with that, we weren’t aware of it.”

Her son deployed with the NATO-led mission in Kosovo, but she remained blissfully free of worry. She didn’t know the Canadians were packing more ammunition than they ever would in Afghanistan.

Then came 9/11, and Canada plunged itself into a 13-year war. Mitic deployed to Kabul in 2003, then Kandahar in 2006. His second tour commenced at the cusp of Canada’s most active period of the war. Attacks, ambushes, offensives, bombings were regular occurrences.

Casualties were mounting, and the reports out of Afghanistan were dire and ubiquitous.

“It was pretty scary,” recalls Fisher-Mitic. “It was like holding your breath all the time. There was a period there when I watched the news constantly. I can’t remember when, exactly, but there was a switch partway through where I just didn’t want to hear it any more. I started to avoid it.”

Her son told her not to worry about him because he was a sniper and wouldn’t be “anywhere near where any of the fighting’s going on.”

In fact, he was in the thick of it, the shooter and team leader in a three-man sniper team assigned to a company. They arrived in mid-August and by Labour Day the CF was launching the biggest Canadian offensive of the war, Operation Medusa.

Mitic’s company was part of the initial assault. He went from sniper duties to casualty collection in about a day. It was four months and many experiences later that he stepped on the mine.

Once Mitic was back in Canada, his mother took it one day at a time, doing everything she could to normalize her son’s circumstances and not react to the horror that lay before her. The military put her up near Toronto’s Sunnybrook Hospital. She was at her son’s bedside daily, along with other family and friends.

“I tried to be kind of practical about it,” she says. “Like when they’d come in to change his dressings, Jody wouldn’t look at what they were doing. So, I basically forced myself to watch because I didn’t want him to think I was horrified.”

For his part, Mitic, now 40, says after joining the military he had always imagined himself a casualty of war.

“To go in my line of work and not think about it is, I think, irresponsible, frankly. Any soldier, even a first responder, who trains well enough should know the potential consequences.

“I always thought it would be a cool wound, though, like a scar on the cheek or Taliban shrapnel in my ass that I could tell kids about at barbecues.”

He battled the initial guilt of leaving his comrades in arms behind. Then he wanted to become useful again—to Queen, country and regiment. He was unaware for months that his career was all but over. Mitic left the military for good in 2014.

Mitic’s productive life didn’t end with his military career, however. It had just begun.

He was the first wounded soldier posted to the military’s Soldier On program after it was created. During rehabilitation, he ran a five-kilometre run with prosthetic legs. In 2013, he and brother Cory competed in “The Amazing Race Canada,” finishing second. He became a motivational speaker and an advocate for wounded veterans and people with disabilities. He grew passionate about their issues.

“That’s the only real thing that still sticks in my craw, how the system failed the wounded in giving us options,” he says. “It took [former chief of the defence staff] Rick Hillier to say ‘no one will be released without my say-so’ to put the brakes on a little bit.

“Even then, there was no effort that I could see within the system to really figure out how to accommodate the wounded in ways that were palatable.”

It’s not an uncommon occurrence. The wounded are often shuffled off to menial tasks; promotions are usually frozen; early retirement is a given. Many of the accommodations made for non-war-related injuries seemed to disappear.

For many, it’s like they’re being punished for their wounds.

“It didn’t make any sense to me,” says Mitic. “Why wouldn’t we go out of our way to accommodate, especially for battle-wounded? That’s the thing: it’s accommodating, but not necessarily in a way that felt honourable.

Mitic was elected to Ottawa city council in the suburban Innes riding in 2014. A year later—eight years after he was wounded—Simon and Schuster Canada published his memoir, Unflinching: The Making of a Canadian Sniper. It became a bestseller. He has since edited Everyday Heroes, a collection of veterans’ inspirational stories, to be released in October.

He is married to retired sergeant Alannah Gilmore, one of the medics who evacuated him after he was wounded. They have two daughters, ages eight and five.

Mitic counts his blessings and has no regrets, he says. Still, he can’t help but wonder from time to time why it was him and what would have happened had he stepped one millimetre left or right of that mine. He was last in the order of march. If anyone else had stepped on it, somebody would certainly have been killed. Even him.

His proud mother has been in awe at the directions Mitic’s life has taken since 2007. She assumes his near-death experience has motivated him to make the most of his time on Earth.

But Fisher-Mitic has no illusions about her son’s wounds. The fact that he lost his legs in the service of his country is of no comfort to her.

“Absolutely not,” she says. “The only comfort is that he survived.

“I don’t know if whatever our country was doing in Afghanistan was a higher cause or not. Like, what did we accomplish, really?”

PrevPrevious ArticleThe jump that changed everything
Next ArticleLights outNext