Home » Health » “Everything works half” 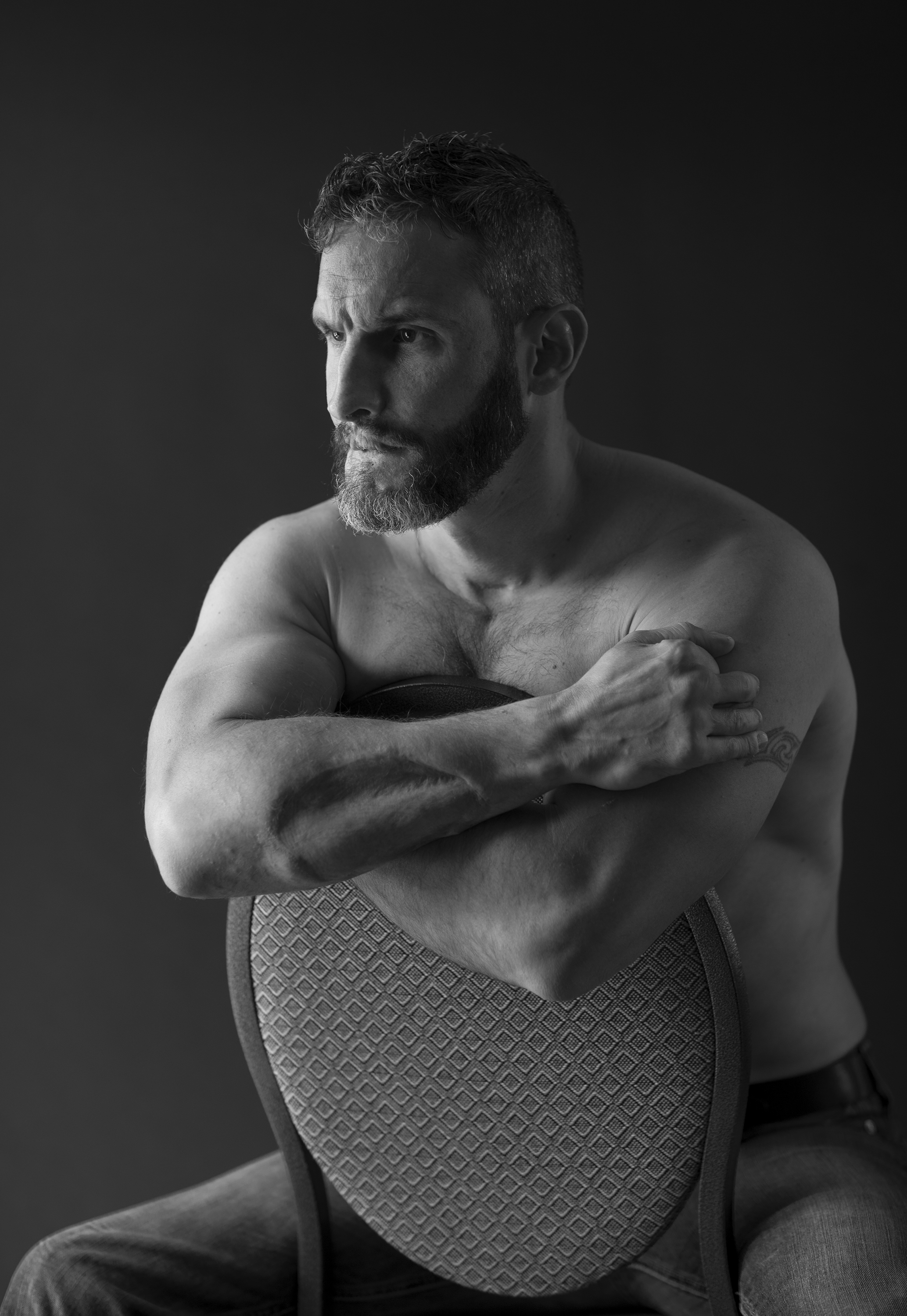 “I’m trying to differentiate myself not as the injured ex-military guy,” says Christian Maranda. “I’m trying different things. It makes me feel alive.”

A bomb had just gone off near Kandahar, Afghanistan. No one was hurt, and Captain Christian Maranda was ruminating about the paperwork all of this would spawn—when all hell broke loose.

It was Aug. 1, 2009, and Maranda’s platoon was escorting a convoy supplying a Royal 22nd Regiment team mentoring a group of Afghan National Army recruits at a strongpoint west of the city.

Coming off 18 months of intense training and three years of officer training before that, Maranda had arrived in Afghanistan on April 3. Two days later, he was in his first firefight. By mid-May, the poppies were harvested to supply the drug trade and fighting season set in.

“Lots of firefights; lots of fun—as fun as it gets, as long as no one was getting hurt,” recalls Maranda, a native of the Lac-Saint-Charles district of Quebec City. “It’s the best job in the world; the best days of my life were probably around that time.

It wasn’t without its difficulties, however. By August, the Van Doos’ 2nd Battalion had been in the thick of it for some time and were starting to show signs of wear.

Working out of a forward operating base in the middle of Zhari District, about 15 kilometres west of Kandahar, Maranda’s platoon was wracked by illness and diarrhea; more than a dozen soldiers were out and they had already suffered losses. Mid-tour leaves were in full swing, further depleting the force.

Operations were not without frustrations, either. Prisoners would be released by local authorities almost as soon as they were locked up, it seemed, and in a kind of deadly game of whack-a-mole, operational sweeps would clear one village, only to have the enemy turn up in another.

“As soon as you looked the other way, boop, they’d reappear,” says Maranda.

Every week or two, they would go on a resupply run to the mentoring team, located between their operating base and Kandahar. Maranda had just returned from his 20-days’ leave and already a lot had changed.

“It was pretty obvious to me that we had lost control over Zhari,” he says. “Police strongpoints were getting attacked every day. At the [forward operating base], we were getting rockets; we were getting [fired on] every now and then, which didn’t happen before.”

The routes used by the Canadians had been changed. In planning for the resupply run, Maranda opted for Ring Road South there and back—a statement and a challenge to the enemy.

He was confident in the assertion that he had the best-trained troops in-theatre to deal with ambushes, improvised explosive devices and whatever else the Taliban could throw at them.

They made the run without incident and were on their way back when an IED exploded between Maranda’s vehicle and the one behind him, the second and third vehicles in the convoy.

“There were no injuries, no mechanical problems, no nothing.”

With his senior warrant officer and his platoon sergeant both on leave, Maranda exited his vehicle along with two engineers, Corporal Christian Bobbitt and Sapper Matthieu Allard, to check out the situation. He ordered everyone else to remain inside their vehicles and called in a drone to assess the overall battlefield situation.

As the three soldiers approached the crater, they could see there was still unexploded material inside, telltale signs of a second yellow jug containing the lethal mixture of home-cooked materials that made up the majority of IEDs.

Bobbitt and Allard had defused many such devices and they set to work, defusing the second IED without incident.

Bobbitt was right there. Allard was immediately behind him. Maranda was off to one side, a couple of metres away.

“At that point, I got this feeling that tells me something’s wrong, I don’t like what I see, I’m getting very pissed right now and I don’t know why,” he recalls. “So, I tell Christian and Matthieu, ‘You know, guys, get the fuck out of here. I don’t like it. We’ll wait for reinforcements.’ And, boom, the third one—or the second one, we’re not sure—went off.”

It was a remotely detonated bomb, designed to go off horizontally rather than vertically, ensuring it would take out as many soldiers as possible.
“We got served,” says Maranda.

Bobbitt and Allard were killed instantly. “They never saw it coming. They didn’t feel anything.”

Maranda got hit from the right side and went flying, landing on a side road about 17 metres away. He woke up seconds later, the dust still hanging in the air around him. “I didn’t know what happened. A second ago, Chris and Matt were right there in front of me and now they weren’t. I couldn’t see them.”

He reached for his weapon but it wasn’t there. They never did find it. His helmet was gone too. He was seeing red—literally. He tried to get up but his legs weren’t working. He could see the blood oozing out with each heartbeat.

It took his mates a minute to find him in the dust and confusion. He was feeling more and more sluggish with every passing second. Even after they applied tourniquets, he could still see and feel the blood loss.

Both his knees were destroyed, both femoral arteries were severed and his right arm was shredded. Both arms were broken. All of his fingers were gone or broken. The lower third of his face was blown away and his body, except for his chest beneath the ceramic plates of his flak jacket, was peppered with, as the medical report stated, “innumerable” shrapnel wounds. Ballistic glasses saved his eyes.

Medevac was summoned and a Blackhawk was redirected from another mission to get Maranda, a priority life-and-death case. “I was lucky a chopper was in the air.”

Still, it was 57 minutes before he reached Kandahar, just inside the critical “golden hour” that is considered the period after a traumatic injury in which emergency treatment is most likely to succeed.

They had no sooner landed than Maranda’s heart stopped and he died. He was revived and died again, only to be brought back a second time.

All he could feel was guilt at not being able to be there for his guys, even though a member of the quick-reaction force told him on the way out they had it covered.

“They didn’t need anybody; they knew what they were doing. But I felt so cheap leaving them.”

He passed out and didn’t wake up for 12 days, coming to in Germany surrounded by family. It would be a while yet before he was out of the woods. He was in hospital for four months and confined to a rehabilitation centre for nine—totalling a year in bed.

He faced more than 60 surgeries over six years and years of rehabilitation. Doctors wanted to take his right leg above the knee but Maranda insisted they try to save it. They did, only after he got his knee working again through hours and hours of effort.

Over years, he went from a wheelchair to crutches to braces to walking on his own.

Two years after the incident, his doctor called him in. He had a copy of an e-mail in his hand and explained to Maranda that the career soldier had set some sort of survival record for blood transfusions.

Medics had to scour the Kandahar base after he’d been brought in, approaching random soldiers and asking their blood types in order to collect enough of Maranda’s type to save his life. There had been no time to test the blood for diseases, so now he had to be tested. He cleared with flying colours.

Maranda left the military in August 2016. He had fought his way through an agonizing rehab and struggled with post-traumatic stress injury and the accompanying vices. His face had been reconstructed, the wounds hidden by a full beard. He walks with a limp and uses braces on difficult terrain, but he rejects the trappings of disability.

Now 38 years old, he has endured a divorce, found a new relationship five years ago, dotes on his two daughters, ages 9 and 11, and immerses himself in sports—sprint kayak—but not the Paralympics or the Invictus Games for the war-wounded.

“I’m trying to differentiate myself not as the injured ex-military guy,” he says. “I’m trying different things. It makes me feel alive.

“If you stay at home, if you stop challenging yourself, you fall into that kind of downward spiral. The big thing for me now is not the physical thing; I’m happy to have what I have left. The issue is more mental health.

“It wouldn’t take much to fall back into depression and start taking opiates and drinking again. I always feel kind of on the edge. But I’m working on it.”

He gives talks and seminars on resiliency and courage in a business context. He works with a professional business coach in Montreal, gauging whether it’s the career for him. Projects, he says, “keep you alive, give you a sense of purpose.”

And in spite of all he endured, Maranda considers himself lucky. Lucky to be alive. Lucky to have all his limbs. He knows too many colleagues in one of those two other categories.

“I shouldn’t be alive today,” he says.