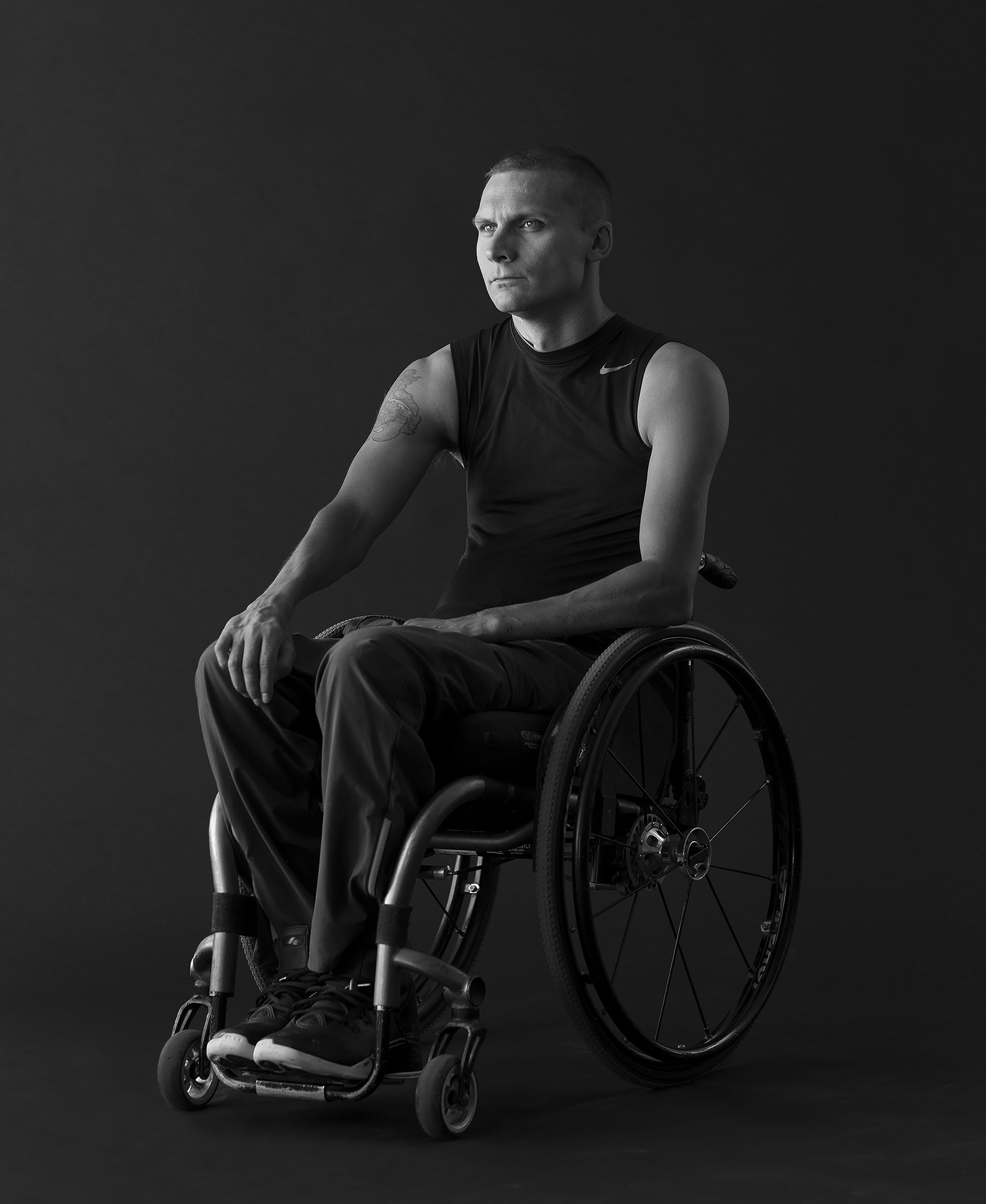 In his 19-year-old mind, an athletic Chris Klodt acknowledged that premature death was a distinct possibility when he joined the army in 2001. He never considered that he might live out most of his life a quadriplegic.

But when the Sudbury-born, Hamilton-raised gunner finally left 2nd Battalion, Princess Patricia’s Canadian Light Infantry, for good in December 2014, that’s what he was—wheelchair-bound with two exploded vertebrae, a spinal cord full of holes and an AK-47 round still buried deep inside his neck.

He had no sensation below his chest. His legs were useless. Some arm muscles worked and some didn’t. He could raise his hands from the wrist with palms down but not palms up. He had more use of his right arm than his left, and more feeling in one hand than the other.

What Chris Klodt did have and still has is a devoted, tough-loving wife, Deena, and two adoring sons, Jonthan and Cameron. And what was working and still works inside this retired corporal better than in most anyone you’re likely to know is his iron will, lion heart and soaring spirit.

Indeed, the overwhelming feelings that radiate from Chris Klodt are love and joy—love for family and joie de vivre, in spite of everything he’s faced and all that he’s overcome.

Deena was seven months pregnant when Klodt was shot by a Taliban insurgent during a firefight in Panjwaii District west of Kandahar on July 7 or 8, 2006—he’s not sure which.

It had been a day like any other day. Manning a forward operating base, his company had set out on a patrol in what was known as the “white school area,” home to the only painted Afghan building any of them had seen—a schoolhouse that had actually been built by the Americans and burned by the Taliban.

“We were being peppered all day,” he recalls. “They’d start contact and break contact. We just kept advancing.”

Klodt’s section got called up to support 5 Platoon’s left flank. They crossed a road they’d “been down a thousand times before” and started taking fire from that left flank. A firefight ensued.

The enemy was just 25 metres out. Klodt couldn’t see their faces but he could see the flashes of their weapons and that’s what he aimed at, emptying about 10 magazines—300 bullets’ worth—and firing six rounds from his M203 grenade-launcher.

Klodt’s war ended when he was hit—twice. One bullet hit him in the neck; the other caught him in his bulletproof vest around the ribcage, getting no further than the ballistic plate but breaking his sternum and collapsing his lung nevertheless.

He pitched violently backwards and lay there, like in a nightmare, unable to speak or move. His larynx and his esophagus had been shot clean through. The sixth and seventh vertebrae exploded on impact, bone matter peppering his spinal cord.

He thought a mortar or a grenade had knocked him down. He tried to get up, but nothing happened. He tried to speak, but nothing came out. It would be 10 days, after coming out of an opioid-induced coma thousands of kilometres away, before he would learn that he’d been shot.

The proof was right there in the x-rays—a 7.62mm round where his two vertebrae used to be. Removing it would have been too risky, the possibility of causing more damage too great.

Klodt wasn’t on the ground long before his fire-team partner and his section commander were at his side. No one knew where he’d been hit, least of all him. His neck was wrapped in an Afghan scarf, and the bleeding was confoundingly minimal.

He didn’t feel pain. “It was an instant shock. The adrenaline was going. Honestly, I didn’t even think about [the paralysis]. My heart rate was up. Before I knew it, I was blacking out and stuff.”

Private Jonathan Barron, a big man on a light machine gun, then handed his weapon off to Master Corporal Colin Fitzgerald, who laid down suppressing fire while Barron picked up Klodt, kit and all, and ran him to a safer spot in the midst of what was now an expanding firefight.

He was back in Ottawa when he learned the details. He was unfazed. His focus would be on Deena and their baby.

“That gave me the motivation to push forward through everything,” he says. “I think that’s one of the benefits I had, from Deena being pregnant. I didn’t have time to think; I was more worried about getting ready to be a dad.

“It’s something I’d always wanted since I was young. I was really excited when she told me she was pregnant. So I just kind of jumped full-in and tried to do as much as I could as fast as I could.”

The couple hadn’t been together that long, but they were evidently crazy about each other. Klodt was six months in hospital, but his recovery and rehabilitation took years. Deena, and wheelchair rugby, would prove critical to his journey.

“I had to relearn how to do everything—dress myself, feed myself, bathe myself. And then there’s the whole medical aspect—bowel routines, catheterizing yourself. It’s like going back to infancy.”

A year after he was wounded, Deena’s maternity leave was up. They had just bought a house in Hamilton when she announced she was going back to Manitoba to work. She took Jonthan with her.

“If you get your independence back, I will move back,” she told Klodt. It was tough love, and it motivated Klodt like nothing else.

“It was the best thing she ever did for me,” he says.

Klodt doubled down and worked like he’d never worked before. Within about six months, he was able to dress himself, feed himself and bathe himself. Just the basics. His confidence was frail. “That was probably the lowest point of my life.”

He was fighting for his independence, knowing that in the end it would bring him the life he wanted, with the woman he loved and their son. “In six months, I made more of a recovery than I did that first year.”

Finally, one day he got up, washed, dressed and fed himself before he even realized his personal-care worker, who was coming in twice a day, had been reading on the couch the whole time.

He realized then and there that he no longer needed a personal-care worker, so he fired her, phoned Deena, and a month later, she and Jonthan were back.

In 2009, Klodt discovered rugby, the final catalyst to his recovery. He’d seen the documentary Murder Ball, about the U.S. wheelchair rugby team. Klodt, who’d been recruited by universities to play football, took to the sport immediately. “Rugby changed everything,” he says. “Rugby’s given me way more back than anything the rehab did, anything that the surgeons did.

“It gave me back a quality of life that just wasn’t there—total independence, total confidence in myself and my abilities. I think it’s because it’s an even playing field; you have to be a quadriplegic to play so something about quads playing with quads kind of drew me.”

And it wasn’t just the playing. It was the beers afterward, the dinners, and the conversations only quads can have with quads—about bowel routines, bladder infections, sex. “Nothing’s off the table when it comes to quads.”

“We’ve already been so friggin’ embarrassed when we were in the hospital that it’s just life now. So when you get talking to someone who’s been in a chair for 30 years, and you’ve only been doing it for two or three, they push you.

Thanks to one conversation, in particular, he internalized fearlessness in a way that people who haven’t travelled the road he has may never understand. “Something clicked in my head that said: ‘I’m a fucking soldier; I don’t fear anything. I ran towards people shooting at me. There is no reason I should be afraid to get into a tub by myself or to fall on the floor.’

“I just became faster, stronger, better for it.”

And so did his relationship. He and Deena adopted Cameron, then married in 2011, a destination wedding in Las Vegas, with family and close friends there to celebrate with them.

Now Klodt’s 35. Fearlessness has become a part of his and Deena’s life together, beyond his own personal triumph. They don’t sweat the small stuff and if there are issues starting to creep into the mix, they confront them.

“We’ve been through a lot together.”