In 1899, the press in English Canada had a cause that filled the front pages. Britain was preparing to fight a war in South Africa against the Boer republics of the Orange Free State and the Transvaal, ostensibly to protect the rights of uitlanders. These mainly British migrant workers were men who had come to the Transvaal to work the rich gold mines and they were, the British claimed, being denied their rights by the Dutch-speaking Boers. In fact, it was the gold that was up for grabs, and British imperial and commercial interests were at stake.

But why should this concern Canada? Jingoism, extreme British imperial patriot-ism, was wildly popular in the late 1890s among English Canadians, and there was strong public support for Canada to send troops well before the war began in October 1899. The British general officer commanding the Dominion militia, General Sir Edward Hutton, had already drawn up a plan for a contingent and leaked it to the press. London was in favour of having Canada send troops. What else mattered?

Much did. First, Canadian national interests were in no way threatened by the two Boer republics. Second, the “Britain right or wrong” attitudes of English Canadians were vehemently opposed by French Canadians who saw in the Boers a small people, much like themselves, being oppressed by powerful British interests. They were not wrong. And third, a British general was improperly trying to orchestrate ministerial and public opinion—and succeeding.

The Liberal cabinet of Sir Wilfrid Laurier, facing an election in 1900, was divided on linguistic lines, with the prime minister instinctively resisting the demand to send troops abroad for Canada’s first foreign war. However, under extreme pressure from the big city newspapers and facing a serious rift in his cabinet, Laurier soon caved in to the majority’s demands. Without consulting Parliament, the government decided that Canada would send a battalion of infantry, quickly raised and equipped.

Laurier’s protégé, Henri Bourassa, the 31-year-old Liberal member for Labelle, Que., broke with his leader on the war issue and resigned his seat in protest. Canada was acting like a colony, he cried. Sending soldiers to fight in South Africa was not a precedent, Laurier retorted. “A precedent is a precedent,” Bourassa replied, correctly, to acclaim in French Canada, calling Laurier a “vendu,” a sell-out, for yielding to pressure. Bourassa was promptly re-elected to Parliament as an independent, and Quebec nationalists had found their leader. He would play a major role in Canadian politics for decades, bedevilling Laurier and
Sir Robert Borden in the Great War to come.

To Bourassa and to those who thought like him in Quebec and English Canada, Canada’s national interests, not Great Britain’s, must come first. And the Canadian nation ought not fight wars for others’ interests. Defend Canada, yes; put Canadian interests first. Act as a nation, not a colony.

Britain’s declaration of war against two Boer republics in South Africa on Oct. 11, 1899, was driven by revenge for past defeats, muckraking colonial administrators on the ground stirring up trouble, and the discovery of gold and diamonds. All of these reasons and more were clothed in the call of a just war to enforce the rule of law for British workers in South Africa who had their civil rights curtailed by the ultra-religious Boers.

The months leading up to Britain’s declaration of war created a furor in Canada. There were heady calls to support Queen and country. Britain’s honour was threatened and Canada, a young dominion, had to stand by her side. British politicians and soldiers and patriotic Canadians expected a rapid war, and few could imagine the world’s superpower having trouble dispatching the Boers in battle.

Canadian Prime Minister Sir Wilfrid Laurier did not want to pay for a war, even though he believed in the righteousness of the empire. He also worried about unity in the dominion. English Canada was panting for a fight, but French Canada was decidedly unimpressed. They saw reflected back to them in the Boer farmers some of their own history stretching back to the conquest of the Seven Years War. 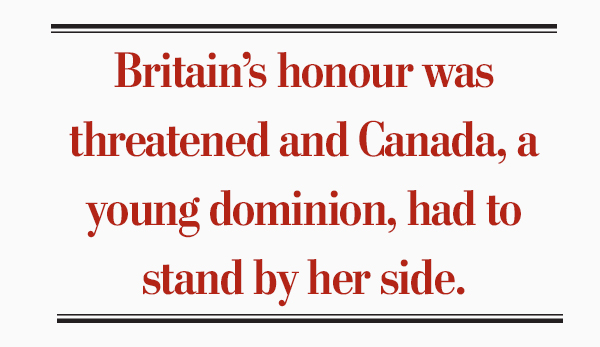 Throughout September and early October, the newspapers of the day, led by Hugh Graham’s Montreal Star, worked themselves into a jingoistic lather, accusing Laurier of slinking into the shadows when duty called.

Laurier was hemorrhaging support. After Britain went to war, the prime minister came to the conclusion in a desperate two-day cabinet meeting on Oct. 12 and 13, 1899, that his government’s political survival was at stake. He cajoled his split cabinet to accept a voluntary contingent of 1,000 men paid for by the British. But it would have a Canadian commander, Canadian uniforms and the Maple Leaf badge.

With Canada deeply proud of its imperial link to Britain, there was no way for the Laurier government to refuse to allow a voluntary contingent to fight, especially with the Australian colonies sending their own units. For Canada, it was more of a political decision to go to war than a military one.

With hindsight, as the passions of empire and war have faded and the reality of the dirty tactics were revealed, one might argue that Canada should have stayed out of the conflict. But that denies the unyielding demands of vocal Canadians of the day and Canada’s intertwined history with Britain. Those who objected to the war in 1899 were largely muted, save for a few political martyrs. Laurier swept the 1900 federal election.

The decision to go to war in 1899 might resonate today: the call of empire or alliances; the demand to bring justice, right of law and civilization to an oppressed people; the media’s tremendous pressure to force the government’s hand; a widely seen opportunity to play a role in events bigger than Canada; and the chance to serve for ideals that many Canadians believe in. These were some of the reasons why Canada went to war in 1899. And they were similar in 1914, 1939, 1950, 1990, 1999 and 2001. Laurier made the right decision.

J.L. Granatstein, a former director and CEO of the Canadian War Museum, has written dozens of books, including Who Killed Canadian Military History?
and Canada’s Army: Waging War and Keeping the Peace.

TIM COOK is a historian at the Canadian War Museum. He is the author of 10 books about the military history of Canada; his latest is Vimy: The Battle and the Legend.