Home » Health » “She’s seen me at my worst, and she was okay with that” 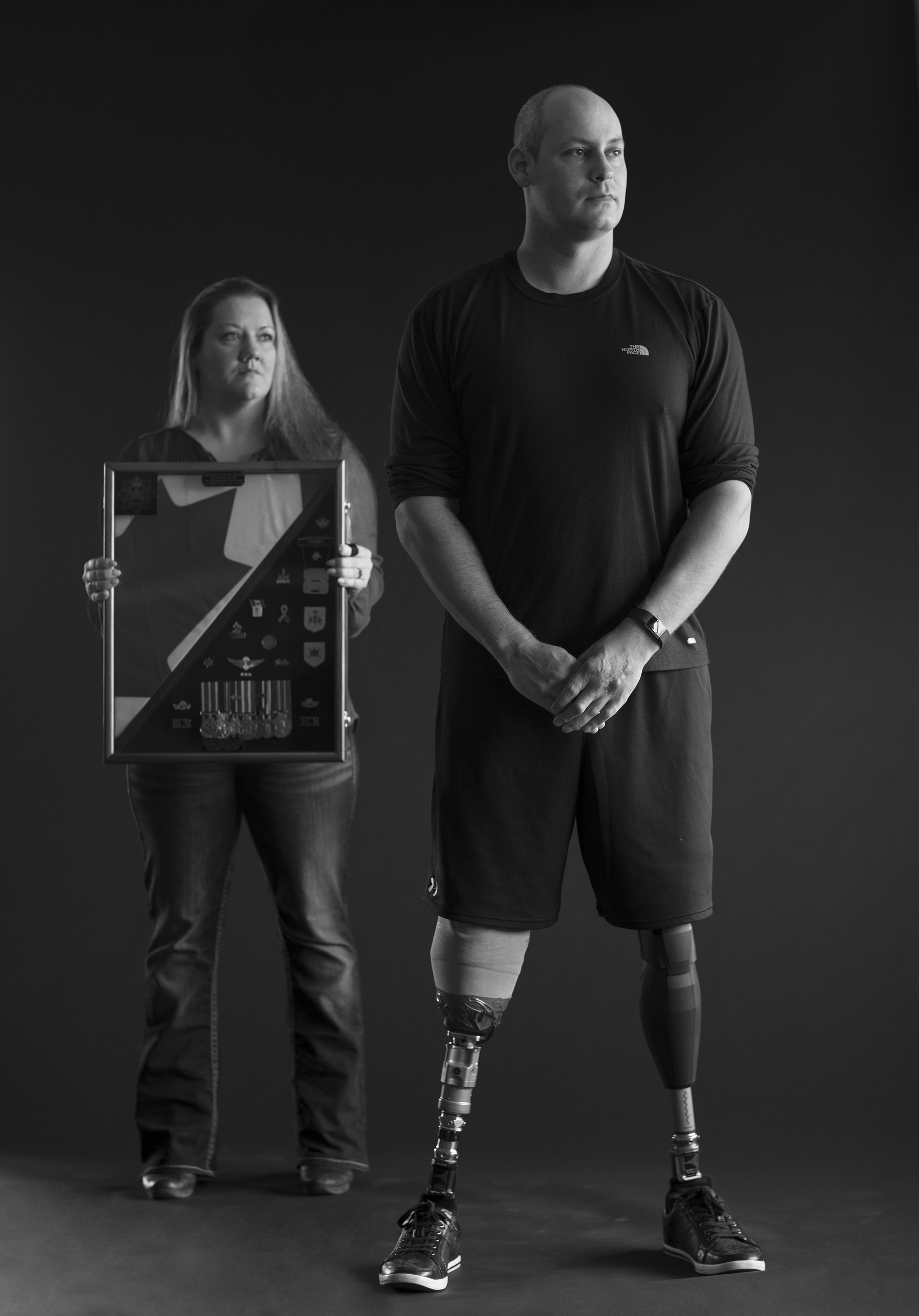 Mike Trauner and Leah Cuffe share the frustrations, pain and nightmares that linger from his wounds

It was just a corridor, but it was probably the longest walk of 30-year-old Leah Cuffe’s life.

Down that hospital hallway in Landstuhl, Germany, was a Canadian flag. And beside that unmistakable red-and-white banner was a door, on the other side of which lay her 29-year-old fiancée, Master Corporal Mike Trauner, M.M.V., C.D., his two legs gone, his left arm almost gone, and his body full of shrapnel.

With three major arteries severed, he had already died twice—once on the Afghanistan battlefield where he had been hit by two bombs, and again in the field hospital back in Kandahar.

Trauner and others from 3rd Battalion, Royal Canadian Regiment, had been on patrol near his forward operating base, an hour’s drive from Kandahar airfield.

Trauner, who had just earned the Medal of Military Valour, the third-highest award for valour in the Canadian military, for an unrelated action, was targeted by two Taliban sitting under a nearby tree. The pair remotely detonated a 120mm mortar and a 105mm artillery shell beneath his feet, apparently hoping the explosion would trigger the mortars on his back and take out more members of his unit.

The bombs had gone off milliseconds apart—enough time, it turned out, for Trauner to be flipped upside down so that his helmet was pocked with what otherwise would have been fatal shrapnel from the second explosion.

Back in Petawawa, Ont., Cuffe got the call hours later, at 4:43 a.m. on Friday, Dec. 5, 2008. She was already awake, struggling with a feeling that something was wrong. She let the phone ring three times. It was a military padre, in her driveway.

The padre and an adjutant had put off breaking the news until they knew Trauner had taken a step back from death’s door.

“They were at my door within seconds,” recalls Cuffe. “The first thing that they told me was ‘Mike is still alive. But can we come in?’ They told me Mike had lost both of his legs after stepping on an IED.

“I wasn’t upset initially. I was more concerned for Mike, whether he knew. So often these guys are put into a medically induced coma and they wake up discovering what had happened. But Mike was awake and aware.”

It wasn’t until she’d spoken to base support staff, who told her what to expect, that it hit her, and hit her hard. She wanted to get to Germany as soon as possible, but she didn’t have a passport and had never flown. She was rushed to Ottawa, where a passport was processed and issued in one hour—on a Saturday.

On Sunday, Cuffe was standing in that hallway in Landstuhl Regional Medical Center, the largest American hospital outside the United States.

“It was the longest, brightest hallway that you’d ever, ever imagine,” she recalls. “It just seemed like it went on forever. And there was a Canadian flag draped outside his room; it was the only one. You could see the red and the white.”

She took that long walk, reached his doorway, and just stood there for what seemed like an eternity, “trying to prepare myself for what I was going to see.”

Finally, she opened the door and walked in. Trauner turned to her and the first words out of his mouth were: “I’m so sorry.” Then he passed out.

“I didn’t know what else to say,” says Trauner. “I actually felt at that point that I’d completely changed and maybe even ruined our lives. I felt guilty.”

Cuffe “melted.” And after he passed out, she just sat there looking at the man she had loved for six years. He was covered up to his neck so, to her, he didn’t look any different except for a patch covering one eye damaged by shrapnel.

Soon after, however, a nurse came in and lifted the sheets to check his wounds. That’s when Cuffe saw for the first time “the reality of our new ‘normal.’”

For Cuffe, there was never any question of where she wanted to be. As she told Trauner again and again: “I love you to pieces.” She was at his bedside first thing each morning till visiting hours ended each night.

Medical staff wanted to insert a feeding tube. Trauner refused it, so nurses picked up healthy foods at a local market and Cuffe hand-fed him every meal. She flossed and brushed his teeth, shaved him, washed him, dressed him and read to him.

He was moved to Ottawa after 12 days. There, they saved his arm and his eye. It was 14 months before he returned to his home.

The couple grew closer. Now they finish each other’s sentences, alternate lines in stories and each seems to know what the other is thinking. They keep jars for the shrapnel that continues to work its way out of Trauner’s body. And they counsel others facing challenges like theirs. Most relationships don’t survive the ordeal.

“I think for relationships to survive something as life-changing and altering what we’ve been through, it depends on how strong the relationship was before it happened,” says Cuffe. “For me, I didn’t miss a beat. It was ‘what’s next? Where do we go from here? How do we get there?’ It’s been that way since it happened.”

Trauner, she says, had the courage to be vulnerable and to ask for her help when he needed it. “I just love him so much. It becomes normal. It becomes your life.”

There are still ups and downs, frustrations, phantom pain and bad dreams. Trauner has endured 18 surgeries and worn 14 different prosthetics. “To this day, every single week, there are new challenges,” he says. “It never stops. We just take it as it comes. She’s seen me at my worst, and she was okay with that.”

They married on June 25, 2015—a spur-of-the-moment decision while they were on vacation in Las Vegas. “Till death do us part.” It already had. Twice. The ceremony with two friends took place in a little white chapel off the Strip.

These days, Trauner’s X-rays glow from all the shrapnel inside of him. He sets off metal-detecting security alarms as a matter of routine.

Among his keepsakes is the watch he had been wearing the day he was hit, the strap crusted in dried blood and desert dust. Until recently, the alarm had gone off every day at 5:30 p.m., or 3 a.m. Afghanistan time—the time he’d gotten up for that last patrol. Takes a lickin’ and keeps on tickin’. Like Trauner. Like their relationship.

Someone at Timex read this story. They contacted Leah and offered to replace the watch.

Three Canadian soldiers were killed later that same day in 2008. Trauner is sure it was at the hands of the same two Taliban. In his scrapbook is a newspaper story about that bloody Friday in Afghanistan. It mentions his incident in the 52nd paragraph, and Trauner is not named.

He wasn’t forgotten, however. Sometime later, he received an anonymous phone call from overseas. “The two guys who blew you up, we just got them,” said the voice. “We took them out with a drone and a hellfire missile.”

Then the line went dead.

PrevPrevious Article“Life is good again”
Next ArticleBrothers in arms, legs, body and mindNext