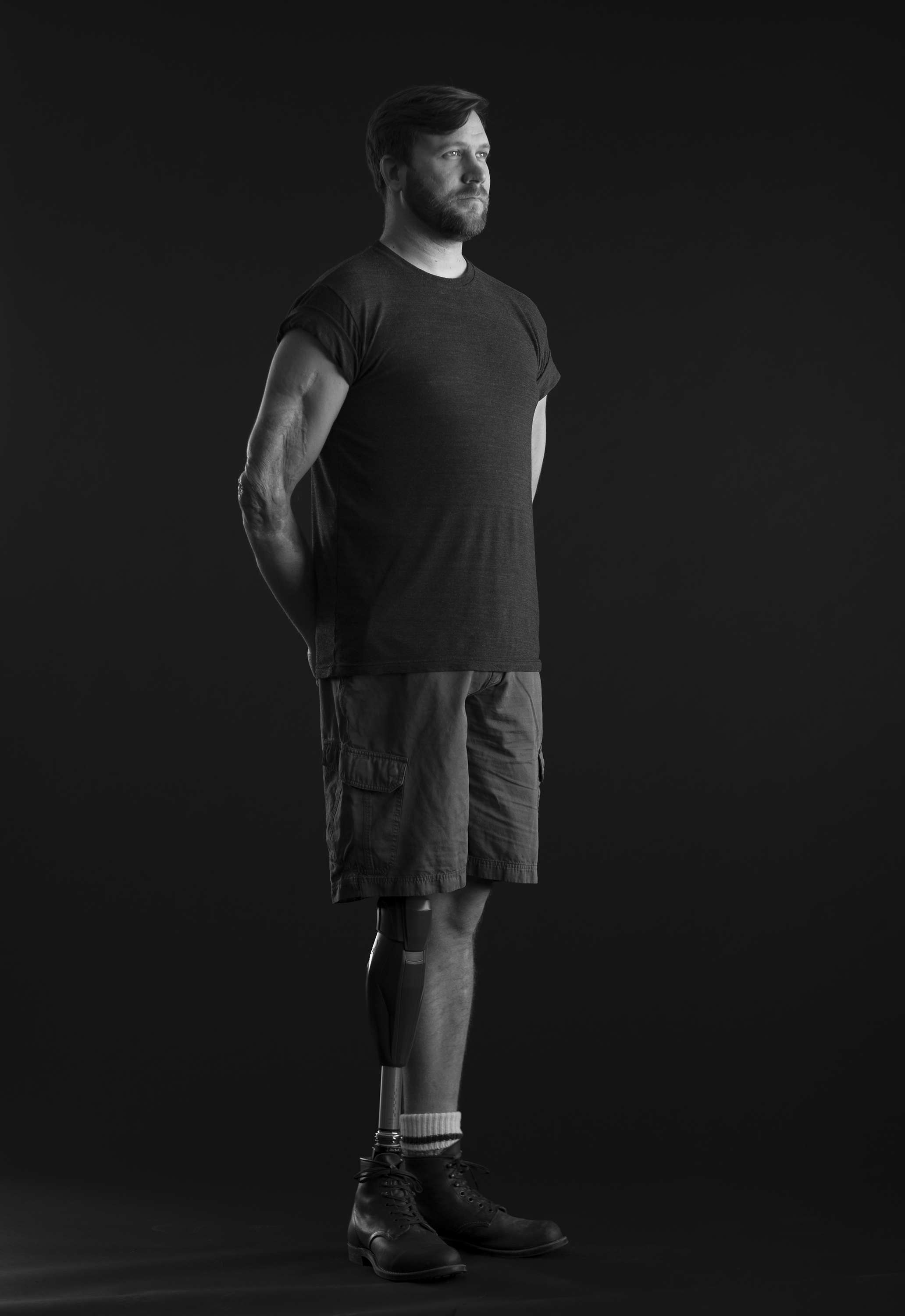 Andrew Knisley, a 24-year-old private in 1st Battalion, Royal Canadian Regiment, was eating Frosted Flakes at a forward operating base an hour’s drive east of Kandahar when he heard about Billy Kerr.

It was Oct. 15, 2008. Kerr, a militiaman in Knisley’s section, was standing on top of two artillery shells when they went off beneath his feet. He lost both legs and an arm, but he was alive.

“You wanna talk about badass,” recalls Knisley, a London, Ont., native. “Our captain said that Billy was on the chopper having a smoke with his remaining arm. He didn’t give two fucks. He even told one of the guys, ‘Hey, get the watch off my [other] arm.’

Knisley knew Kerr well and, while news of his wounds hit him like a sledgehammer, the story of how the veteran reservist handled his dire circumstances inspired Knisley greatly.

“We were constantly getting updates on how he was doing. Before I even got blown up, he had already gotten prosthetics and had been up walking and carrying on. I thought that was incredible, and that did a hell of a lot for my psyche, knowing that I gotta still walk around in bomb country and knowing that, if it does happen, Billy got it just about as bad as anybody could and here he goes.”

There would be others killed and wounded.

On Knisley’s fourth day in-country, the other half of his split patrol was hit by an improvised explosive device. His guys found another hastily placed IED just 50 metres down the road. “You learned very quickly, there was no fucking around,” he says.

In September, he had shot a suicide bomber dead three metres away as the attacker stepped into the middle of their patrol, yelled “Allahu Akbar!” and punched a cellphone in his hand with two wires running up his sleeve. “I was staring death in the face.”

But it wasn’t the bullets that saved Knisley: the bomber’s batteries were dead.

On Dec. 5, Master Corporal Mike Trauner was hit by a remotely detonated mortar and artillery shell. He lost both legs and nearly his left arm.

Knisley’s turn came on Jan. 19, 2009. He was on a presence patrol when two Chinese-made artillery shells buried in an adobe wall were remotely detonated just over a metre away from him. He was the seventh soldier to walk past the spot.

His right leg and arm were shredded. His watch was blown off his arm and his service pistol, which had been strapped to his right leg, was found 400 metres away, bent double. Knisley never lost consciousness. Tourniquets saved his life.

“I got blown up and over this wadi [dry riverbed] on the left,” he recalls. “I remember the blast and I remember being hit. If you’ve ever taken a heavy hit in hockey with your head down, where you’re not expecting it, it was exactly like that.

“I thought to myself, ‘John [the soldier behind him], what the fuck, man?’”

It couldn’t have been much more than a millisecond before he realized he hadn’t been bodychecked.

“My Camelbak [hydration pack] had been blown over my head and I’d landed face-down. Having seen several IED incidents where people had literally been blown to bits, I thought, ‘That’s my legs.’ I’m thinking I got cut in half and I’m about to die.”

His right arm had been blasted to the bone at the elbow. The ulner nerve was severed. So was a major nerve and the femoral artery in his right leg.

He soon realized the extent of his injuries. He felt no pain, initially. He was completely lucid throughout. “I realized I needed to stay calm, especially with the amount I was bleeding, because if I got too excited, I was going to bleed out.”

They amputated three-quarters of the way up his femur in Kandahar. They took the rest of his leg in Bagram. He was three days at the American military hospital in Landstuhl, Germany, and then he was back in Ottawa.

The extent of his amputation, all the way to his pelvis, became a point of pride. Knisley would goad the two soldiers with whom he would spend much of his recovery—Kerr and Trauner.

The three became more than brothers in arms. They were, and still are, blood brothers of a rare kind—brothers in arms, legs, body and mind, each with his own challenges, each supported by the others in their own unique way, all with the knowledge of where they’d been and what they’d done. They wore their wounds like badges of honour.

Knisley would have more than a dozen surgeries, including extensive grafts of nerves and skin. His comradeship with Kerr and Trauner would, in his own words, “become one of the most important parts of my recovery.”

“They say ‘sound of mind, sound of body,’” he says. “Everybody up until that point was like ‘Oh, you poor guy.’ And I was thinking, ‘You don’t know where I’ve just come from and the things we’ve been up to; I’m not just some poor guy.’

“I don’t need pity; I don’t need to be felt sorry for. I knew the rules and shit happens. But to see Mike and Billy, it was like nothing had ever happened. They were soldiers. It was the same old humour; the things I found funny before are the same things that are still funny now.”

He was told they would be there and that they could “talk.” Knisley didn’t want to sit in a circle, griping about his problems and listening to others gripe about theirs.

“A lot of the time, the people I’d met up with would plant this seed: ‘Everything’s different now.’ And I felt it doesn’t have to be; I always thought that. Meeting Billy and Mike, to know that they were feeling the same way and acting the same way, was just so relieving.”

They would trade insults. Race wheelchairs. Have demolition derbies. Leave skid marks on the floor. And trade more insults. “You don’t have a leg to stand on,” Knisley would tell them.

Their behaviour concerned some nurses, who feared someone’s feelings would get hurt. To the contrary, the repartee and competitiveness lifted them above their injuries and the challenges—physical and mental—they posed.

Knisley earned the nickname “Skippy,” because he’d hop around on his one remaining leg. Trauner and his now-wife Leah Cuffe brought him a gingerbread man for his birthday. They made sure to break the right leg off before they gave it to him.

Still soldiers, they adjusted the motors on their electric wheelchairs so they’d go faster, then they’d race until nurses posted No Racing signs in the hallways. After that, they put up speed-limit signs.

They were there for first fittings of prosthetics, for highs and lows, triumphs and defeats. The three learned to walk together. They’d laugh and mock one another when one stumbled and fell.

“We’d boost each other’s morale and bust each other’s balls,” said Trauner, who, along with Cuffe, became an advocate for Knisley, helping him navigate the endless bureaucracy that proved as challenging as his war wounds.

“The military wasn’t set up for injuries like ours even though we’d been getting blown up since 2006,” says Knisley. “No real progress had been made. Even now, it’s quite poor. It ended up falling on spouses like Leah and [Kerr’s wife] Tracy.”

“When you go for an entitlement, it’s a thought between ‘is it worth the mental anguish and work and time and ups and downs to get this, or am I better off without it?’” says Knisley’s fiancée, Erin Moore.

“The system, it will break you,” says Knisley. “The guns and bombs and fighting, that was easy.… Dealing with the system after the fact is the hardest part.”

Still, his friends helped him through. When he felt defeated, they’d lift him up. When he fell down, they’d make him get up himself. They always knew what the other needed because, by times, they needed it themselves. “I am very grateful to be home now,” says Trauner. “But I still miss those times with those guys.”

“It is profound. Soldiers have a way of motivating each other. Coming from an overseas mentality, you also do not want to let down your brothers.”

Eventually, he and Trauner would enter a rally race together, and crash. Trauner was acting as navigator at the time. “I was driving,” said Knisley. “He crashed the car.”

PrevPrevious Article“She’s seen me at my worst, and she was okay with that”
Next ArticleMiracle manNext