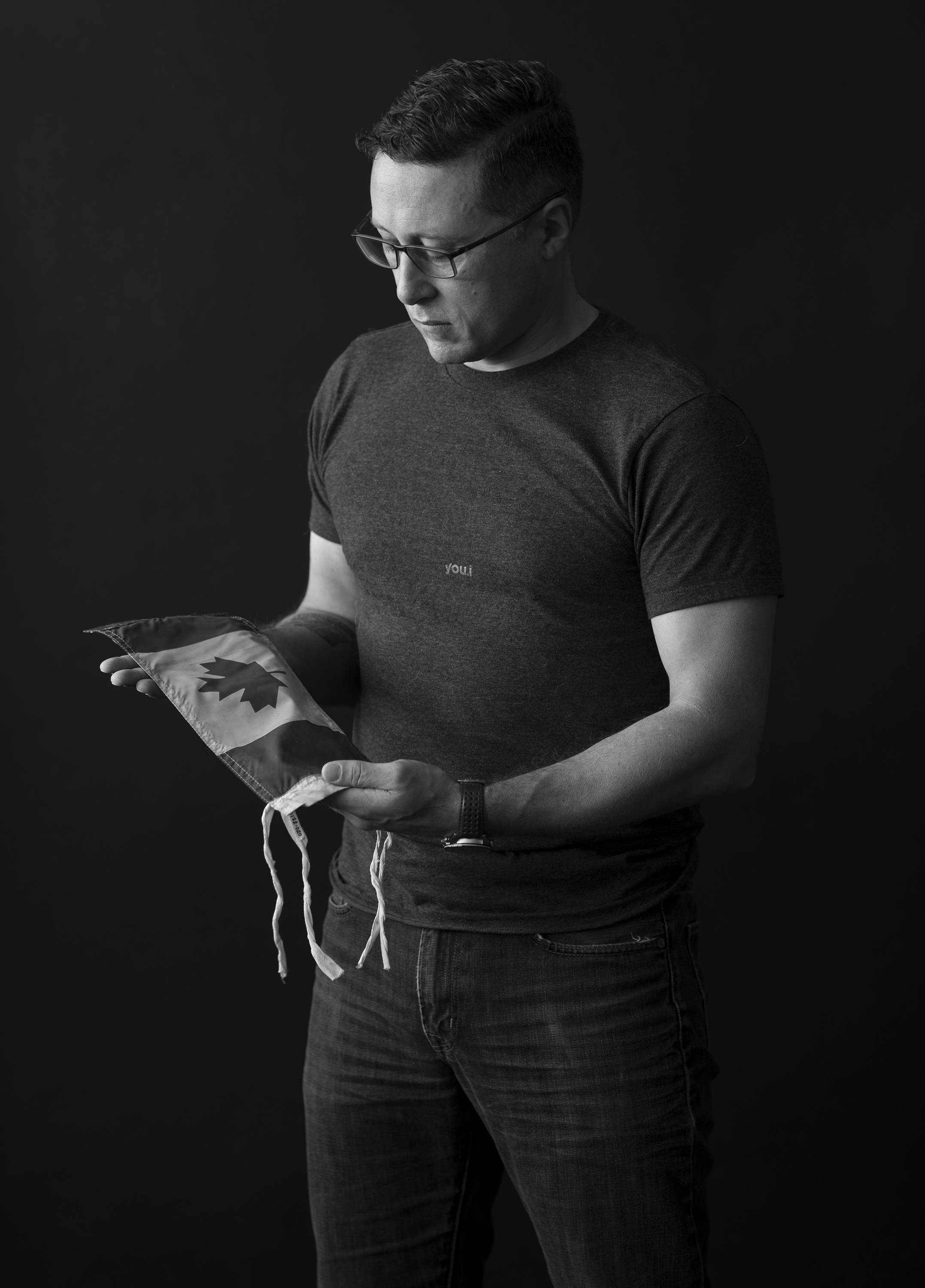 Sergeant Dan Matthews was the only one of six paratroopers to escape without a scrape from an Oct. 2, 2003, mine blast in Afghanistan. Now, almost 14 years later, the psychological wounds inflicted on that terrible day and in the days since still throb.

As he cradles and contemplates the Maple Leaf pennant that flew from his Iltis military vehicle, the guilt and the pain are written all over Matthews’ face, despite his heroic attempts to save the occupants of what was left of the lead vehicle in his patrol. Matthews, who had been conducting rear security in the back of the second vehicle and facing away from the blast, crawled on his stomach toward the stricken Iltis, feeling his way forward with his bayonet, looking for mines as he went.

What he found has haunted him ever since. The vehicle driven by Corporal Thomas Stirling had been blown beyond recognition by at least two anti-tank mines. Their section commander, Sgt. Robert Short, and a comrade, Cpl. Robbie Beerenfenger, were dead. Stirling was badly wounded; six years later, he would commit suicide.

But how he responded that day has always been less important to Matthews than the fact two buddies were dead and three others wounded. During an interview 72 hours after the incident, Matthews was distraught, sobbing as he struggled to make sense of what had happened.

“I was the lucky one,” he said at the time. “Hell, yes, I feel guilty. If I could take their spots, I would. We all have families. Why was I spared and they weren’t?”

Several months later, Matthews temporarily lost the sight in one eye due to delayed effects of concussion from the blast. By then, the lasting damage—psychological damage—had already been done.

He was diagnosed with post-traumatic stress disorder, and thus began years of random counselling, with little commitment and even less effect. He was depressed and angry. “At the drop of a hat, I’d go to war.”

Finally, his wife Robin put her foot down: get real help or else. They’d been married eight years, had one son and a daughter on the way. “It took that kind of shock to sort me out. I went and got stable—at least what I thought was stable.”

He changed his trade, leaving the Royal Canadian Regiment for military intelligence, where he thought he could do more good finding bad guys and keeping his own alive. Eventually, he was posted to National Defence headquarters.

He was cruising, thinking everything was ok when, in fact, it wasn’t. People around him were treating him differently. He didn’t realize it right away, but he’d already been written off by fellow soldiers as “sick, lame and lazy”—an old rank-and-file term for troops who succumbed to psychological wounds.

But it wasn’t until he was posted to an army unit that the harassment began. He wasn’t the guy they wanted and once they learned of his traumatic stress injury, he says they “figured they’d break me to get rid of me.”

Fellow soldiers threatened to initiate steps to take away his jump wings. During exercises in Gagetown, N.B., someone reported him suicidal. He wasn’t. But the call got him pulled from the field in front of his peers. Everything perceived as a threat to self-harm was taken away and he was put on suicide watch.

“I got home and I crashed,” he recalls. “I crashed so hard, I didn’t see light anymore. It got to the point where I was going to have to go back to that unit and my career manager said ‘no’ and swapped me out with somebody else.”

“My uniform made my skin crawl. I couldn’t be around people in uniform anymore. I couldn’t go inside military buildings anymore. I was having panic attacks. I’d cry; my hands would start to shake.

“It was a whole lot of dark, all coming from that one spot.”

In 2012-13, 10 years after the incident, he didn’t leave the house for an entire year. His counsellor was ineffectual. Robin finally called the PTSD clinic and arranged a meeting. Matthews went from a social worker to a psychologist, asked her to be tough, and started making progress. “The psychologist kicked my ass.”

Eventually, he got comfortable enough in crowds to return to school. He earned a diploma in photography from Algonquin College. He received his honorable discharge on Oct. 19, 2016, after 21 years in the military. Now he’s reclaiming his life, a little bit at a time.

He still sees a psychologist under a Veterans Affairs program. Anti-depressants and sleeping pills help. He’s weaning himself off a nightmare suppressant.