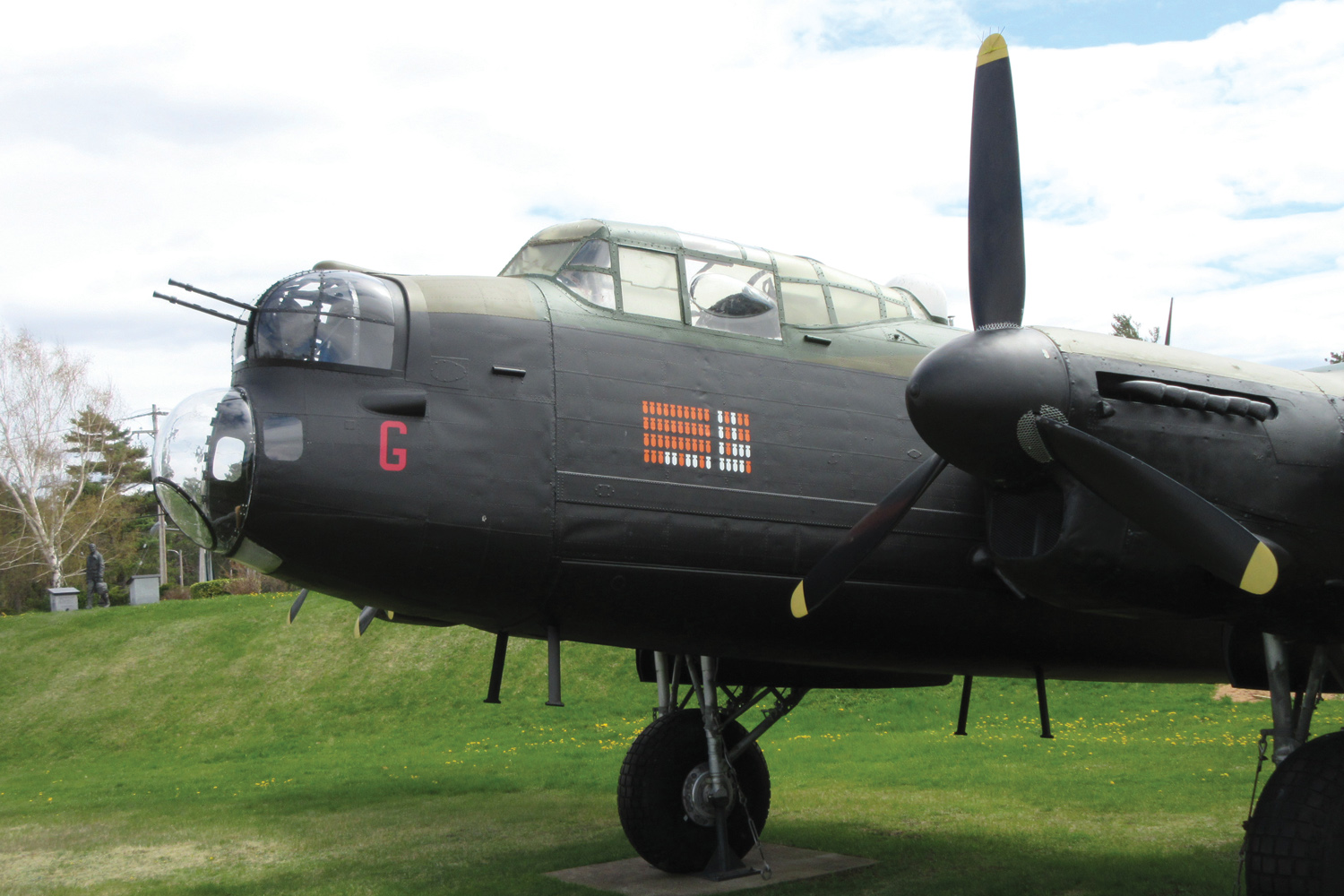 The Lancaster under restoration by the Greenwood Military Aviation Museum has been painted in late-war camouflage with tail No. JB226 to honour a 60-mission, 405 Squadron MKIII Lancaster with call sign LQ-G.
Malcolm Uhlman

Clark Montgomery spent interminable hours punctuated by moments of sheer terror in the gun turret atop a Lancaster bomber between 1941 and 1945.

Now he’s there to stay, one of seven veteran aircrew and one production line worker whose names will be immortalized on plaques inside a restored bomber in Greenwood, N.S.

The aircraft currently being rebuilt by the Greenwood Military Aviation Museum is one of only 17 surviving Lancasters worldwide.

Now 95, Montgomery has vivid memories both fond and otherwise of the plane that carried him into the jaws of the beast and back out again more times than many of his comrades were lucky enough to count.

According to its official history, almost half Bomber Command’s 125,000 aircrew—55,500 men—were killed in action. Another 8,403 were wounded. The life expectancy of a Lancaster crewman was measured in weeks.

Montgomery was assigned to 428 (Ghost) Squadron out of RAF Middleton St. George in northeast England. He knew well the day he walked on site the price many of his mates would pay in the skies over Germany.

“They didn’t call it the Ghost Squadron for nothing,” he says. “They’d send out 14 or 15 aircraft and three or four would come back.”

The Lanc was a lumbering aircraft, designed to carry big loads. They could take a beating, though gunners like Montgomery didn’t have the protection their U.S. counterparts aboard the B-17s did. The Lancs, however, could carry triple the bomb load of the Americans.

Dave Saulnier, co-ordinator of the Greenwood restoration project, said stepping inside the Lancaster for the first time was an eye-opener.

“The interior failed to live up to my naive childhood imagination of a spacious, insulated, comfortable aircraft,” he said. “Rather, it was cold, dark, cramped and, most of all, completely devoid of any trim that usually gives the illusion of strength and substance to the airframe. 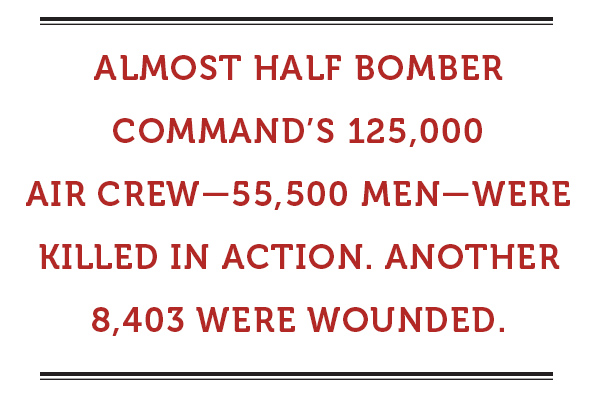 “The flimsy nature of the longerons, fuselage ribs and exterior skins was completely exposed, dispelling any notion that the structure would somehow protect the occupants against live fire or flak. The lasting impression was that these were truly built as disposable aircraft.”

Regardless, Montgomery and his crewmates beat overwhelming odds and returned to England again and again, their plane riddled with bullet holes or flak damage. On one mission, they endured four separate fighter attacks. 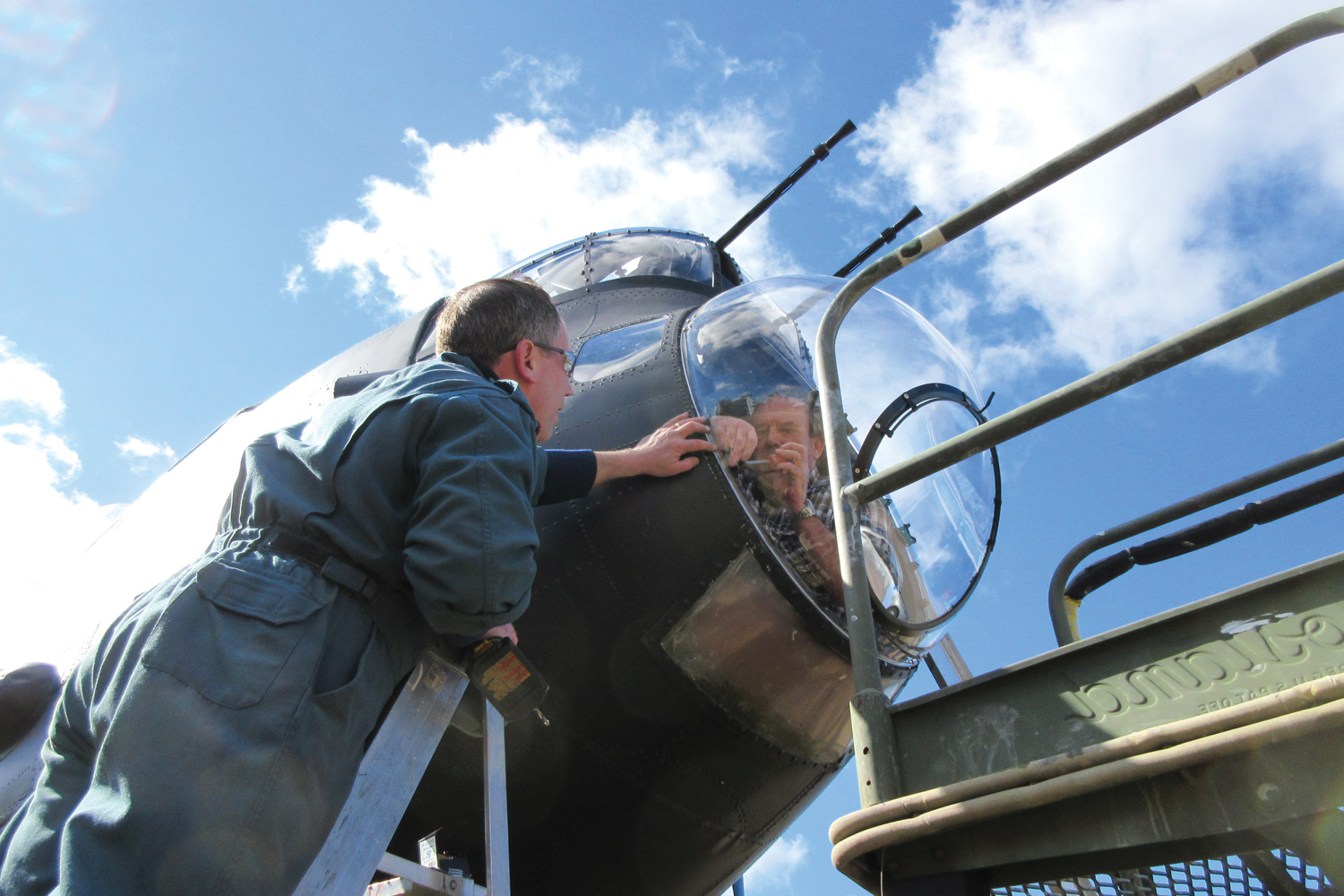 Another time, they limped back on three engines, only to come under fire from the Royal Navy. And once they won the lottery, counting several hundred holes in their plane, more than any other that survived that mission. That earned them free beer.

“She saved our lives more than once, that baby,” he said. “You made one trip and that was enough. You learned a lot or you weren’t living, that’s all.”

“Monty,” as he was known, was originally a tail gunner. He flew two missions back there before their six-foot-four top gunner requested a switch from the cramped quarters upstairs. Montgomery figured his motivation was more likely the fact that it was easier to bail out of the tail position, and the lower gunner could wear his parachute in there by sitting on it, whereas up top he couldn’t do either. Neither knew then that a Lancaster tail gunner, exposed as he was, had the lowest life expectancy in the RCAF.

Between them, they sent at least four German aircraft smoking into the cloud cover. Montgomery’s gun mate survived the war but committed suicide sometime after returning to Canada.

British and Commonwealth squadrons flew night missions. The Americans bombed during the day. Montgomery’s crew flew one day-time mission—a 1,000-bomber raid with the Americans over Hamburg—and he couldn’t wait to get back to nighttime operations. It was the first time they’d seen the Me-262 in action, and the German jets were working the fringes of the formation picking off aircraft like flies.

The Canadians—or anyone else, for that matter—had never seen anything like it. The 262s were so fast, Montgomery couldn’t track them. After the bomb run, the Germans lined up on his aircraft.

“Skipper, I think we’re next,” he told his pilot.

“I can’t follow them; they’re too fast. What are we going to do?”

“She’s all yours,” his pilot said.

Montgomery took another look and saw the Germans closing fast: “Corkscrew starboard go!” he called. The plane peeled off and their whole section followed them. The Germans made one more pass and left. The Canadians lived to fight another day—that day, in fact. They reached England, slept a few hours, and headed out to bomb Hamburg and its munitions factories again that night.

Eleven of today’s 17 surviving Lancaster airframes happen to be in Canada, including one of only two airworthy ones, the Mynarski aircraft maintained by the Canadian Warplane Heritage Museum in Hamilton, Ont. Unable to finance an airworthy refit of their own, the Greenwood museum donated all four of their engines to Hamilton.

The Greenwood airframe was first delivered to No. 419 Squadron RCAF in January 1945 and completed 26 sorties. She was damaged twice by anti-aircraft fire.

She returned to Canada at the end of the war in Europe, initially destined for Japan. Ultimately, the aircraft was modified to Arctic reconnaissance specifications, then flown to Greenwood after she was retired in 1963.

Now, 2,500 man-hours into the restoration project, she’s been painted in late-war camouflage on her upper surfaces with black undersides. They gave her tail No. JB226 to honour a 60-mission, 405 Squadron MKIII Lancaster with call sign LQ-G.

The museum bought an authentic Fraser Nash FN50 mid-upper gun turret from a private owner last February. It’s being restored and should be installed by spring.

Saulnier, a graduate of Royal Military College who spent his 22-year career as an aerospace engineer, doesn’t remember when he came up with the idea of honouring the eight by riveting plaques to their stations.

“It was probably during one of the many trips on my way to the front of the aircraft where I either stumbled in the darkness, hit my head on low-hanging structures, or had to practically lay prone to climb over the incredibly intrusive main wing spar,” he said.

As far as Montgomery knows, he’s the last of his crew still living. He was the youngest. They always kept in touch. “Our skipper died years ago. The navigator used to write me all the time but I haven’t heard from him in four or five years.

Gone, but not forgotten.