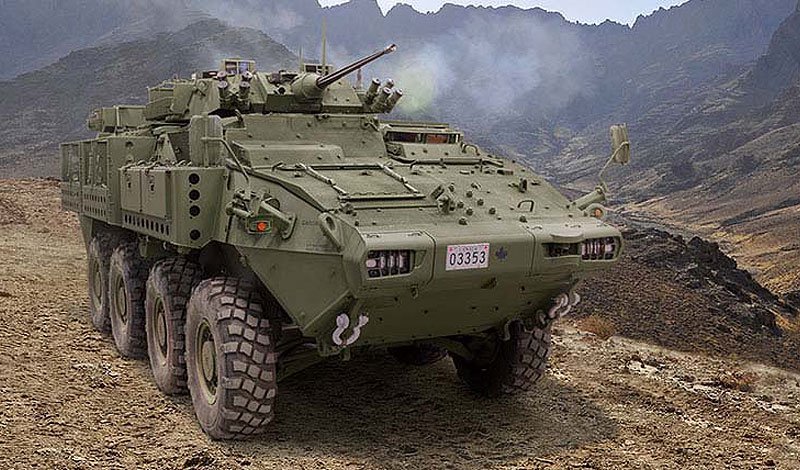 Upgrades to the Canadian Army’s Light Armoured Vehicle III will help expand its lifespan to 2035.
GDLS Canada
The Light Armoured Vehicle (LAV) III recently pegged for a $404-million upgrade is the backbone of the army–an eight-wheeled, Canadian-built troop carrier and weapons platform that steered the course of modern infantry configuration.

Acquiring them in 1999, the federal government has invested $1.5 billion over the past six years to improve its London, Ont.-made fleet of 550 LAV IIIs. The upgrades to their mobility, protection, ergonomics and information management are expected to extend their lives to 2035.

Built by General Dynamics Land Systems, the LAV IIIs are a Canadian success story, although the original design is based on a Swedish unit. New Zealand bought 105 of them. The United States adapted them as the core vehicle of their Stryker battalions.

Successor to the venerable Bison, 13 were lost and at least 159 damaged by mines, improvised explosive devices or enemy fire during Canada’s 14-year Afghanistan mission–a testament to just how much the infantry relies on the LAV III.

But their adoption 18 years ago was not without controversy within military ranks. The LAV III necessitated army rifle sections to be downsized–to seven soldiers from about 10–in order to fit them in the new vehicles. Some feared this would stretch rifle sections in combat situations.

As it happened, some infantry skill sets were transferred out to other elements–mortars to the artillery, for example; pioneers were phased out (but later revived in more specialized roles)–all to make way for the LAV’s required drivers, gunners and crew commanders, along with the training necessary to bring them up to speed.

They argued that diverting resources to operation and upkeep would rob the infantry of valuable fighting elements, especially in the kind of counter-insurgency operations being mounted in Afghanistan.

They lost that argument and, as it was brought into service, the LAV III started to drive the infantry in more ways than just across terrain. It has, in the words of retired soldiers, played a huge part in the configuration of Canada’s present-day military.

Ottawa is focusing this round of work on the hulls of 141 of the high-tech, high-speed vehicles. The LAV III is a versatile 17-tonne vehicle, whose eight wheels are more effective on more terrain, more serviceable in more environments and more protective against explosives than their tracked alternative.

The big tires, one former soldier said, can save lives by absorbing part of a mine or IED strike and blowing off instead of channeling the energy into the crew compartment as the heavy superstructure of a tracked vehicle might do.

They were a marked improvement over the military’s first eight-wheeler, the Bison, which has been in service since 1990. LAVs have better weapons systems and drive trains, as well as LED displays offering forward vision for troops inside and ramps rather than an awkward single step in and out.

The announcement of the latest round of improvements came just in time to avert expected staff cuts at London’s General Dynamics plant, sustaining the equivalent of about 250 skilled jobs. Final delivery is expected by December 2019.