Sometimes political leaders do the right thing for the wrong reasons.

Prime Minister John Diefenbaker’s 1963 non-decision on arming U.S. Bomarc air defence missiles stationed on Canadian soil with nuclear warheads was a case study in how not to govern. It flew in the face of Diefenbaker’s own admission that his government’s agreement under the North American Air Defence (Norad) pact included an obligation to arm the Bomarcs with nuclear weapons. It led to the resignation of his defence minister, a split in his cabinet, a section of the party demanding his resignation, and the public wrath of Canada’s closest ally. A cornered prime minister had no recourse but to call an election that brought about the defeat of his government four years after achieving the largest majority in Canadian history.

The incoming government of Lester Pearson fulfilled a Liberal campaign promise by accepting nuclear weapons for the Bomarcs.

Diefenbaker left office to the general derision of the Canadian elites. But in 1965 the philosopher George Grant published a famous book entitled Lament for a Nation vindicating Diefenbaker’s doomed but “noble” defence of national sovereignty. Grant admitted that Diefenbaker had made a mess of things but insisted that “his inability to govern is linked with the inability of this country to be sovereign.”

The very reason for the Bomarcs in Canada went back to the 1959 decision to scrap the made-in-Canada Avro Arrow jet interceptor. There was nothing wrong with the Arrow—except for the refusal of the Americans to purchase what was then a state-of-the-art piece of military technology. In its place, as a defence against Soviet air attack, Canada agreed to station Bomarcs. But Diefenbaker would never take the next step of making them fully operational.

There were reasons for restiveness about American domination of Canadian foreign and defence policy in the early 1960s, especially after the election of a brash new U.S. president, John F. Kennedy, who demonstrated disdain for Diefenbaker and little concern for consulting his northern neighbour about matters of war and peace.

The Cuban Missile Crisis of 1962 was a particular shock. Kennedy simply expected Canada to do what it was told. The cabinet refused, by majority vote, to go along with raising the level of nuclear alert for its Norad forces. Diefenbaker’s defence minister, Douglas Harkness, insubordinately ordered Canadian forces to comply with the American demand. This was a sign of a fatal division in Diefenbaker’s cabinet between hawks and doves. 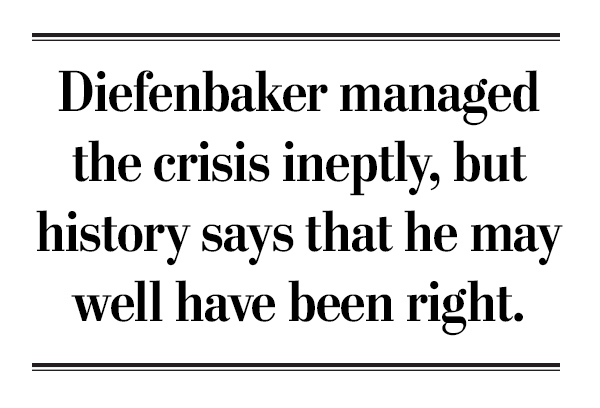 In 1968 a new prime minister, Pierre Trudeau, questioned the value of the nuclear-armed Bomarcs and in 1972 the warheads were removed. Nuclear weapons have never since been permitted on Canadian soil.

Diefenbaker managed the crisis ineptly, but history says that he may well have been right. 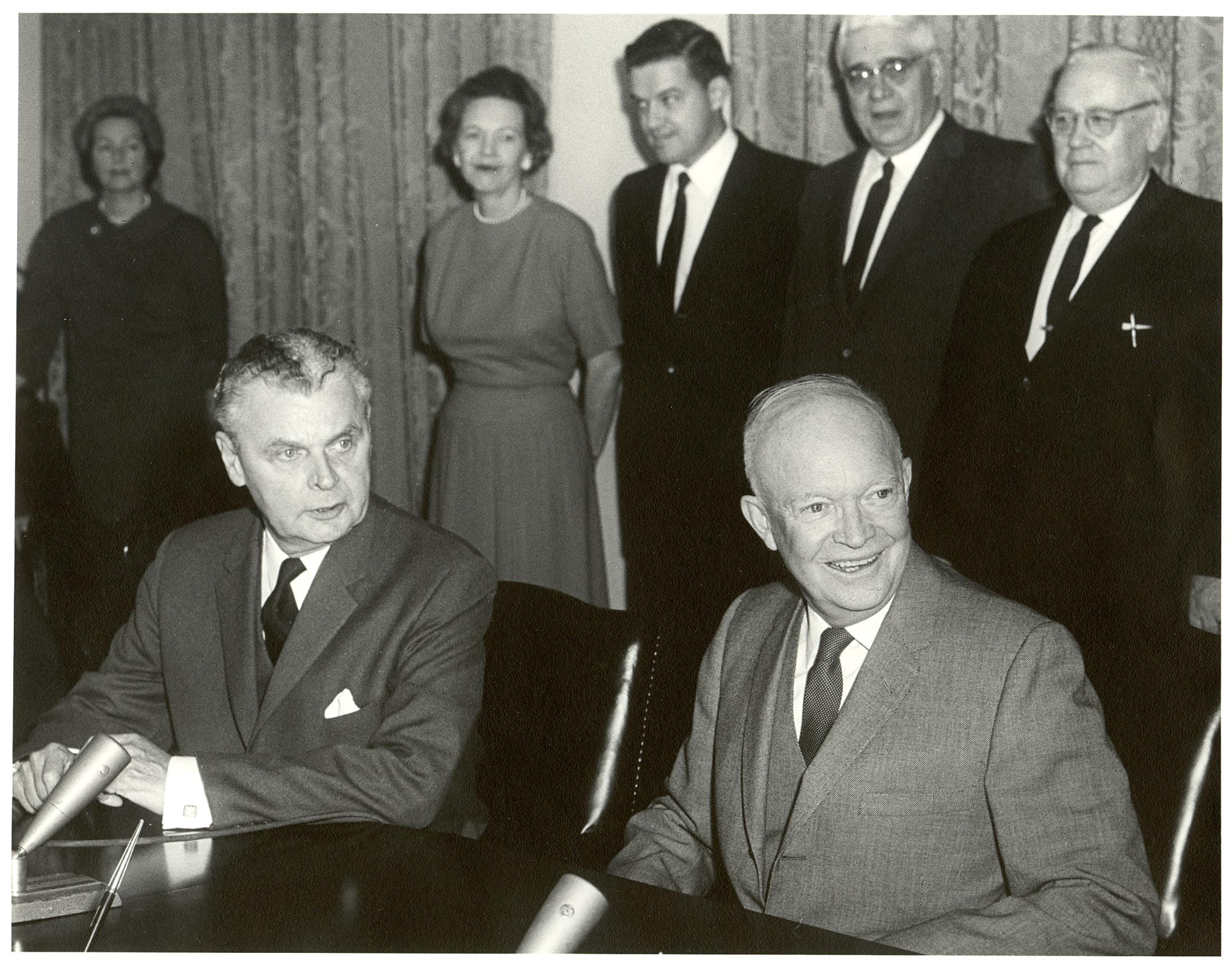 Let’s consider this question in three parts, the first being the relations between Canada and the United States.

North America’s defence was a responsibility shared by both nations, and Prime Minister Diefenbaker had taken Canada into the North American Air Defence Agreement in 1958. The next year, he accepted Bomarc surface-to-air missiles and announced in Parliament that nuclear warheads were necessary to make these weapons effective. The Bomarcs were intended to protect both Canadian and U.S. cities from attack by Soviet bombers.

By early 1962, President John Kennedy had become very cool to Diefenbaker, but the prime minister’s hesitancy in putting the Canadian Forces on alert during the October 1962 Cuban Missile Crisis made the U.S. leader furious. When Diefenbaker reneged on arming the Bomarc in early 1963, Canada-U.S. relations were in the deepest of freezes.

Secondly, there were the military aspects of the nuclear question. At the beginning of the 1960s, the public’s opposition to nuclear weapons was small but growing. The military chiefs in Canada and the U.S. dismissed the opposition because they believed they needed nuclear arms to counter the U.S.S.R.’s manpower advantage. In addition to accepting the nuclear-armed Bomarc, Canada had committed to accepting nuclear weapons in Europe.

In other words, Diefenbaker’s hesitancy over nuclear weapons affected both North America and Europe-NATO members, especially the U.S. If Canada was in an alliance, either Norad or NATO, and if it accepted nuclear roles and then reneged, who might be next?

Finally, there was the domestic political side of the nuclear question. Diefenbaker’s Progressive Conservatives had won a huge electoral victory in 1958. In 1962, economic mismanagement reduced the Tories to a minority, and grumbling about the Chief began in Conservative ranks.

Essentially, the cabinet and party split in two. The anti-nuclear forces in Cabinet were led by External Affairs Minister Howard Green, while the pro-nuclear wing was headed by Defence Minister Douglas Harkness. In the middle, indecisively wavering back and forth was the Prime Minister, today seemingly pro-nuclear, tomorrow opposed. The Cuban crisis compounded the split, adding a sharp tone of anti-Americanism to the issue. There was a sense that Canada should have been given more notice of U.S. actions and that the government should not be bullied.

But bullied Canada would be. On Jan. 30, 1963, after Diefenbaker had equivocated in Parliament during a debate, the U.S. Embassy in Ottawa released a statement that bluntly said “the Canadian Government has not as yet proposed any arrangement sufficiently practical to contribute effectively to North American defense.” That put the fat in the fire. While the prime minister fulminated, ministers began resigning, led by Harkness. Diefenbaker lost a vote of confidence in the House of Commons, and Canada was into an election once more, the great issue being Canada’s relations with the U.S. and nuclear weapons. 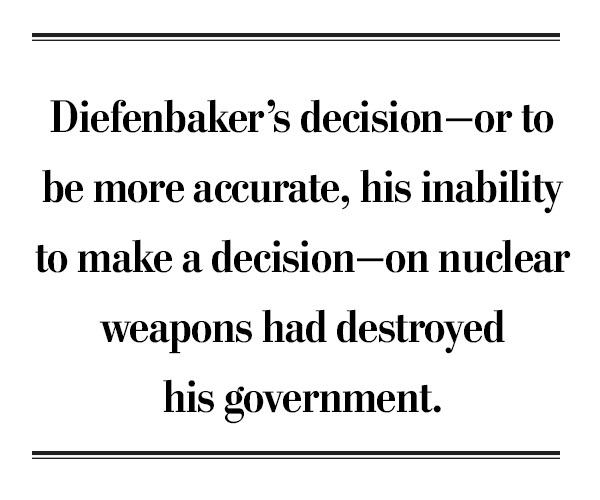 Diefenbaker mounted a magnificent campaign and managed to hold the Lester Pearson-led Liberals to a minority victory. But there can be no doubt that Diefenbaker lost power because of his policy on nuclear weapons. Diefenbaker’s decision—or to be more accurate, his inability to make a decision—on nuclear weapons had destroyed his government. The Conservatives would not be back in power, save for a few months in 1979-80, for 21 years.