The steady trickle of results from studies of post-traumatic stress disorder and traumatic brain injury (TBI) has provided much food for thought and grist for conversation this year. Tongues are wagging (if that describes online comments and blogs) about the surprising results of a study by a team of Dutch, British and Australian psychotrauma experts reported in the British Journal of Psychiatry this summer.

PTSD occurs around the world, and in each country rates are higher among the vulnerable—the poor, undereducated and malnourished, who have less access to health care but greater exposure to trauma. So shouldn’t more vulnerable countries where trauma is common also display higher national rates of PTSD?

Apparently not. National PTSD rates are higher in richer countries. “Our findings were the opposite of what we had predicted,” the team reported. Lead researcher Michel Dückers has dubbed it the “vulnerability paradox.”

Perhaps predictably, countries with low exposure to trauma and lots of ways to mitigate its effect (like Japan) have a national lifetime risk of PTSD of under two per cent. Surprisingly, so do countries with lots of trauma and fewer resources, such as Mexico and Colombia.

And a real shocker—peaceful Canada has a national lifetime PTSD rate of 9.2 per cent and tops the list of 24 countries studied. Beggaring belief, at the bottom of the list is violent Nigeria, with its repeated machete massacres of whole villages, its kidnappings of whole schools, its great divide between the oil rich and soil poor. And a national lifetime PTSD rate of zero. That’s 0.0 in the report’s comparison graph.

So what’s up with that? 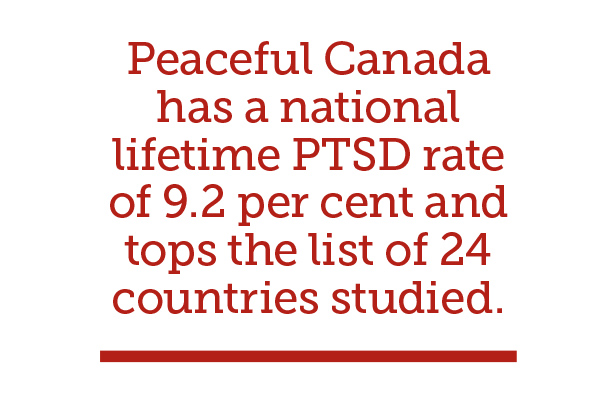 The authors say it’s not due to better diagnosis and treatment in rich countries, explaining the data on which the study relies came from representative populations in each country, randomly chosen for personal interviews about mental health.

Perhaps, they muse, stigma around mental health prevented people in poorer countries from truthfully answering questions during interviews. Or perhaps it’s cultural difference. Some people argue PTSD is “a Western concept we’re trying to impose on people from different cultures,” Chris Brewin, one of the researchers, told the U.K.’s Guardian newspaper.

Perhaps those with limited options who expect regular doses of tragedy in life are less likely to have their world view shattered by trauma. Or perhaps poorer societies have more of what the researchers call “social capital” that helps trauma victims rebuild their lives.

The authors said their results should spark conversation, and they welcome further research to either replicate their results or identify flaws. Given data showing Nigeria is PTSD free, it’s certainly easier to believe the count is off, or the wrong questions were asked in those interviews.

While this study seems to raise as many questions as it answers, one by researchers at the U.S. Defense Department’s Center for Neuroscience and Regenerative Medicine has answered a really big question. They report finding the first physical evidence of blast brain injury—a relief to the many military veterans who suffer from what has until now been described as an invisible wound of war, because the injury goes undetected in sophisticated brain scans.

The microscopic injuries were identified in post-mortem examinations of eight U.S. veterans, five exposed to multiple blasts, three exposed to big blasts. Their brains had been donated to the centre’s brain tissue repository for research into traumatic brain injury.

Some had also been diagnosed with concussion or post-traumatic stress disorder, depression and anxiety. One had committed suicide shortly after an inconclusive brain scan; several had died of overdoses. All showed scarring along the area where the brain’s grey and white matter intersect, researchers reported in the medical journal, Lancet Neurology.

Significantly, this scarring differs from what is found in the brains of athletes with concussions and from a control group, several of whom had died from drug overdoses. 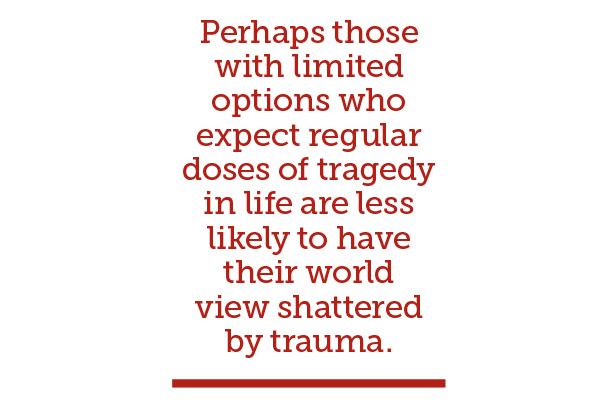 There were also signs the brains had begun healing. Lead researcher Dr. Daniel Perl, the repository’s director, said “through more research, we can come up with better means of prevention, diagnosis and treatment.” Treatment has been a hit-and-miss affair, as doctors have not known precisely what has been damaged in the brain, or how to help it heal, repair it or help rehabilitate it to compensate for the damage (When the Brain Goes Boom, July/August). Now there is a target for treatment.

Another target has been identified by neuroendocrinologists with the U.S. Veterans Affairs Healthcare System in Seattle and at Massachusetts General Hospital. They found about 40 per cent of soldiers with blast TBI develop pituitary disorders resulting in hormonal deficiencies that can be mistaken for post-traumatic stress disorder.

Hormone therapy may help some veterans’ symptoms. It’s not yet known how the pituitary gland, buried deep in the head, could be damaged in the first place. Are connections between the gland and the brain damaged, or the boundary between white and grey matter? Is inflammation the problem? Answers await future research.