Care through the Commonwealth 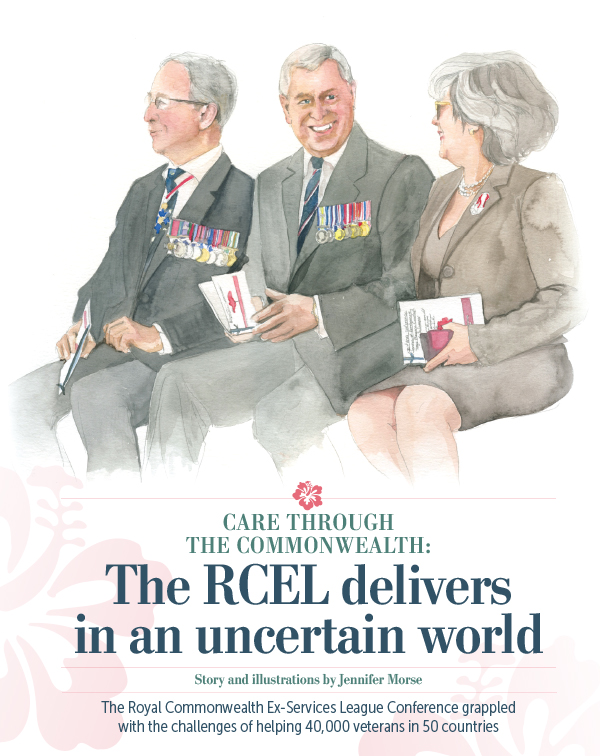 I landed in Kuala Lumpur, Malaysia, for the 32nd Royal Commonwealth Ex-Services League (RCEL) Conference on June 25, arriving to a midnight traffic jam, horns beeping and impatient motorcycles threading between cars. It is a sprawling metropolis of seven million with a vibrant nightlife, and for the next two and a half hours we moved slowly toward the hotel.

Memories of war are still vivid in this country; it endured almost 40 years of near-continuous fighting, most recently only a generation ago. The Malayan Emergency, where Commonwealth forces fought the communist Malayan National Liberation Army (MNLA), lasted from 1948 to 1960. The MNLA was defeated but it rose up again in the late sixties and the Second Malayan Emergency lasted until 1989 when the military arm of the Malayan Communist Party was finally beaten. There were more than 17,500 casualties.

The previous generation was engaged in the Second World War. An hour before the Japanese attacked Pearl Harbor on Dec. 7, 1941, Japanese soldiers landed on Malaysian shores and bombed Singapore. A squadron of Bristol Blenheims was sent to defend the country, though all but one were shot down. In less than two months Commonwealth forces were defeated.

All of this came to mind at the morning remembrance service at the Tugu Negara Cenotaph, which honours those who died for Malaysia’s freedom. Prince Andrew, the Duke of York, placed the first wreath. He was followed by representatives from 50 Commonwealth countries, including Royal Canadian Legion (RCL) Dominion President Dave Flannigan, who placed a wreath on behalf of Canada.

The next day, business sessions began with the unanimous election of Prince Andrew as the new Grand President. His father, Prince Philip, Duke of Edinburgh, was Grand President for 41 years and now the responsibility has been passed on to Andrew. “My father gave me some fairly strict instruction,” the Prince told delegates. “He said, ‘You’ve got to keep them going.’ Whilst we should be doing ourselves out of a job, started nearly a century ago, the need is just as important today…. I’ve got some ideas and I listened to some ideas last night…but it is your job to discuss and to determine this organization’s continuing role and the way it is best to serve those that we have believed have served us.” 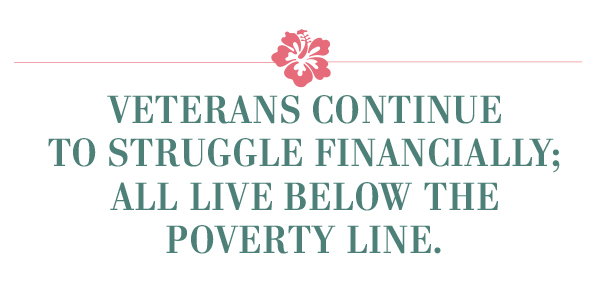 For three days the convention grappled with the challenges of serving those veterans in the wake of Brexit, falling currencies, rising costs, the threat of terrorism, even the future of the organization itself. Many veterans continue to struggle financially. All live below the poverty line, and the League established a clear goal to provide a meal a day to every veteran in need.

These practical issues are set against the backdrop of an increasingly unstable world. We were given sad reminders of this during the conference; in those three days, ISIS was suspected of, or claimed responsibility for, a series of assaults around the globe: Mukallah, Yemen: 43 dead; Istanbul, Turkey: 45 killed; Dhaka, Bangladesh: 24 dead. 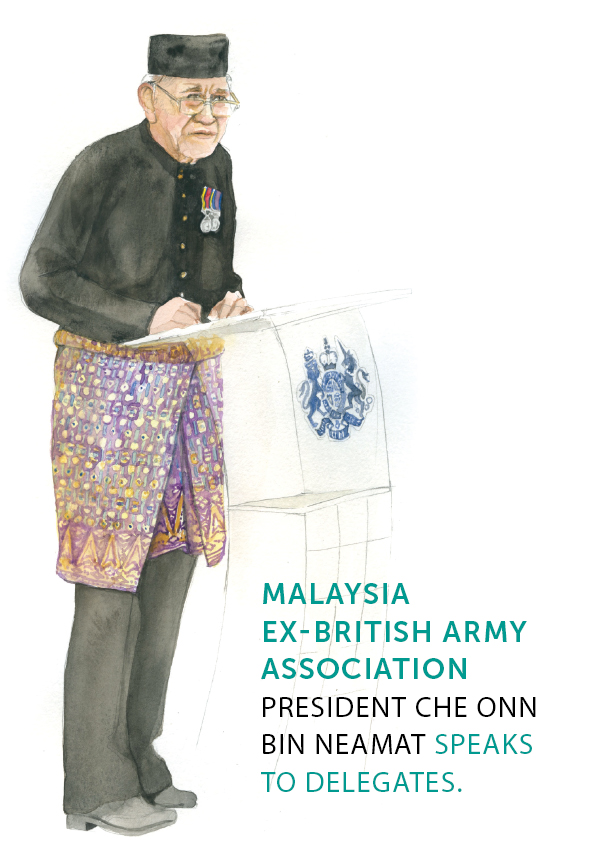 Deputy Grand President Lord David Richards spoke of these problems in his opening remarks. “The defense of democracy and freedom is as vital now as it was 71 years ago when the Axis powers were defeated at the end of [the Second World War],” he said. “Those that still survive that world war may be forgiven for feeling as uneasy about global stability as they did in the 1930s…during the last four years we have had some of the heaviest calls on our welfare funds ever.”

There are several reasons for this. One problem is the devaluation of the post-Brexit British pound. This is the central currency for the RCEL and it has taken a beating, meaning the money that is distributed doesn’t go as far as it did just months ago.

Though there was some happy news on the funding front, with money coming from an unexpected source. The London Interbank Offered Rate (LIBOR) scandal revealed that a number of banks had manipulated their interest rates for profit. The resulting fines amounted to billions of pounds, and some of that has gone to the RCEL. On July 8, 2015, the Chancellor of the Exchequer announced to the House of Commons, “We’ve been able to use money from the banking fines, paid by those who represent the worst of British values, to support those in uniform who demonstrate the best in British values.”

The RCEL was awarded a grant of five million pounds to be spent over the next five years. The normal allocation of 575,000 pounds was almost doubled and the founding members also received a grant. Canada’s share was slightly more than $300,000. But this is a one-time arrangement; the Exchequer doesn’t contribute to the same charity twice.

And the LIBOR award has suffered from the post-Brexit devaluation. It was valued at a little over C$10 million at the pound’s peak in February 2016; six months later, it had dropped to approximately $8,500,000.

And it isn’t just the British pound that presents conversion problems. Since 1966 the RCL has managed the care of veterans and widows in need in the Caribbean by providing individual assistance grants and poppy supplies to help them encourage donations and remembrance.

Adina Munroe from the Bahamas thanked the Legion for the donation of poppy supplies but talked about the challenges of converting our currency. The C$26,000 Canadian that was sent converted to US$16,000, leaving a shortfall of US$10,000. “Therefore,” she said, “we are humbly asking for a tiny raise, for not only the Bahamas, but other islands that might need it.”

When Prince Andrew met privately with the founding members of the RCEL—Canada, England/Scotland, Australia/New Zealand and South Africa—he was surprised to learn about Canada’s ongoing commitment to the Caribbean countries. Last June, at the RCL Dominion Convention in St. John’s, delegates donated an impressive $170,002 (as of June 30, 2016, Legionnaires had donated $220,918). The RCL provides an average of $1,080 per veteran per year and $540 annually for widows over 60. 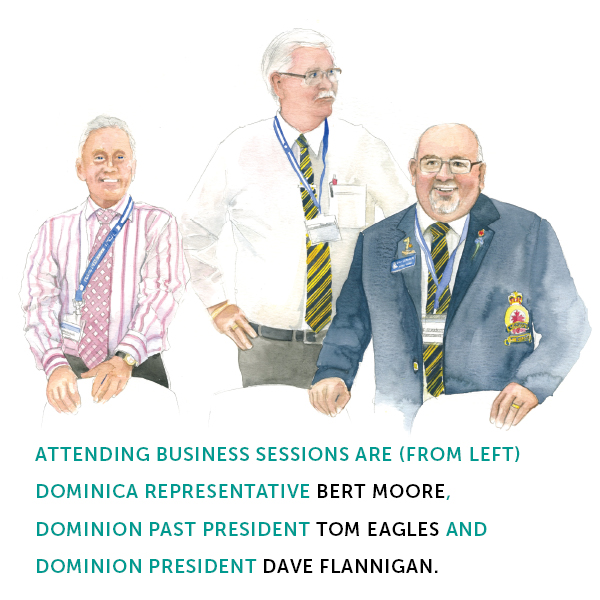 Honourary Treasurer Michael Winarick acknowledged the Canadian contribution. “It is appropriate to remind the conference,” he said, “of our debt to the RCL for their significant financial commitment and support of the Caribbean countries they have provided over the past four years [$953,095].”

Globally, funds now have to go farther than ever, dealing with not just standard disbursements and fluctuating currencies, but with unforeseen events. John King, Chairman of the Standing Committee on Welfare Programmes, told the convention about new challenges. “In addition to the individual welfare grants that are provided,” he said, “our charity has been able to assist veterans and their families after they have been affected by various disasters that have occurred in the past few years. For example, flooding in India, Burma, Uganda and Sierra Leone, food parcels for displaced veterans and widows in IDP [internally displaced person] camps in Nigeria, and assistance for those who were severely affected by the dreadful Ebola crisis in Sierra Leone and other areas of West Africa.”

In 2015, King had requested all the member organizations assist with a census. “This exercise identified around 40,000 eligible veterans and widows around the globe,” he said. “We were surprised, in a pleasant way, to discover that so many were still alive…. People are living longer than expected and more and more people are falling into the poverty trap and seeking our help. Costs, particularly basic food and medical treatment, are rising steeply.”

In some countries, just identifying the veterans is a challenge. Tom Benyon, who was representing Zimbabwe, is the founder of Zimbabwe a National Emergency (ZANE). ZANE partners with the Royal British Legion (RBL) and the RCEL, and since its inception has identified thousands of [Second World War] veterans and their widows. He spoke about conditions in Zimbabwe. “At the beginning of the great inflation,” he said, “the currency was debauched to nothing and the people there in the 41 nursing homes were doing what elderly people do whenever there is a financial crisis, which is saving their money—which is the last thing that you should do in the face of hyperinflation. You should be buying tooth paste. You should be buying soap. You should be buying loo paper. So these people had no idea what was going to hit them. And what was going to hit them was the devastation of all their assets, all their pension funds, all their capital assets, all their savings…a group of people ended up completely penniless. About 20,000 people were trapped there, of whom, probably 9,000 suddenly found themselves reduced into poverty.”

ZANE now has 24 people whose job it is to find needy veterans and to help them. The risks to these volunteers are overwhelming. “It is a police state,” Benyon explained. “They could get arrested at any time. There is an enormous problem of corruption in all African countries, as I’m sure all your readers know. In Zimbabwe they’ve turned corruption, incompetence and bad management into a sort of an art form. It is absolutely chronic…. We’ve never trusted any of the banks. Four and a half million dollars has been transferred and given in penny packets, in brown envelopes and signed for by the veterans. We have money changers who give us U.S. dollars, because now that’s the currency of Zimbabwe. We transfer all that money into brown envelopes and deliver it to all the veterans in the area. Without which they wouldn’t have survived.”

Inevitably, as at most conventions, governance raised its head. RCL Dominion President Dave Flannigan chaired Canada’s group and there were many questions from the 16 Caribbean countries about the charity’s survival, whether the RCEL might lose its independence if it aligns with the RBL, and if the charity can continue after the last eligible pre-independence veteran is gone. Flannigan put minds at ease when he explained, “The founding members have been assured that control remains with the RCEL.”

In the end, delegates agreed that the RCEL should align with the RBL, which will allow the league to continue to act as an independent charity and secure its financial future. Flannigan also explained that the RCEL’s core business is the distribution of funds to pre-independence Commonwealth veterans and widows, but as those veterans diminish, agency work may very well become what sustains the RCEL. Since the RCEL has networks in place to get funding to veterans in remote locations, regiments and units trying to help veterans from modern conflicts can use those logistics to find and help their own. 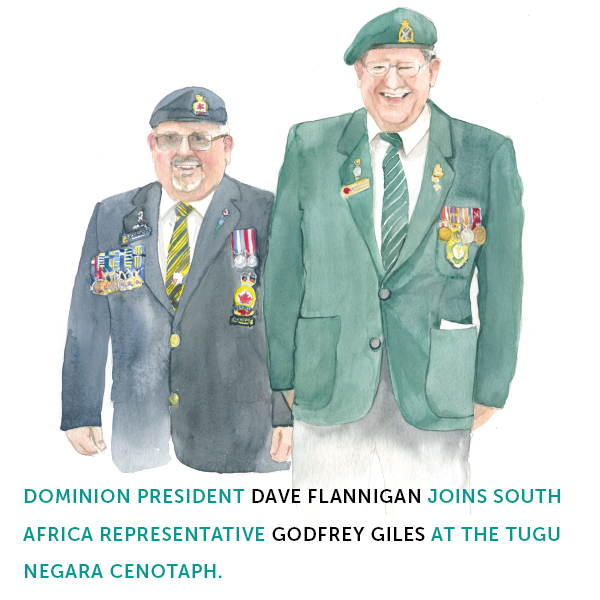 The countries in Canada’s regional group also accepted the revised RCEL constitution with minor alterations. It was agreed that the time between conferences be extended to five years, and there was unanimous support for South Africa to host the next conference, in 2021, the 100th anniversary of the league.

After the closing ceremonies delegates were hosted at the British Embassy. Prince Andrew summed up the RCEL’s contribution. “The work that you do for ex-servicemen around the world is absolutely vital,” he said. “My father did a huge amount whilst he was your Grand President and he was particularly knowledgeable about the issues that faced those who served alongside him in the 1940s. I have a slightly more contemporary ex-service view, having served in the 1980s. I believe that whilst the numbers might have been diminishing for the services you provide, the sentiment, the responsibility and the poignancy still remains absolutely as it has been and will always be.”

For these delegates, there is no alternative. They are here to help, and natural disasters, disease, tumbling economies and war must be overcome. 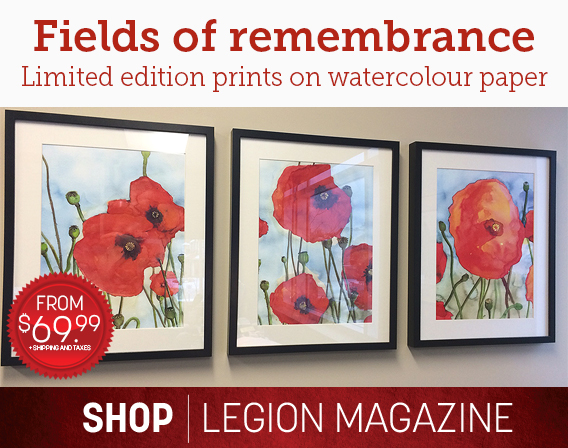