The National War Memorial in Ottawa will be closed to visitors this summer as it goes through a second phase of repairs and conservation.

The Department of National Defence also announced in April that the popular National Sentry Program, which would have started on April 9, has been suspended for 2016.

Public Services and Procurement Canada says it will be completing structural slab replacement, replacing damaged stonework where needed, repairing damaged areas of the cenotaph and refurbishing the bronze statues. 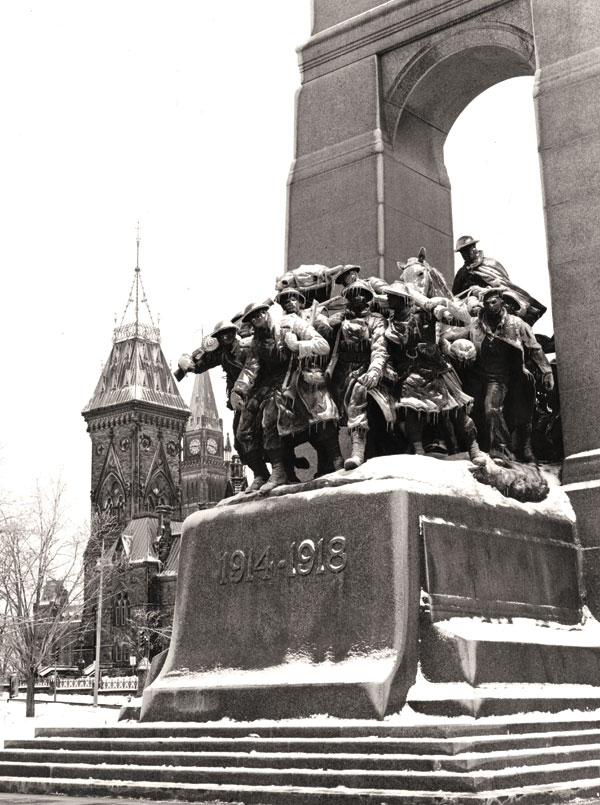 The Tomb of the Unknown Soldier will be preserved and protected throughout the process. The tomb is a four-metre-long granite and bronze sarcophagus which contains the remains of an unknown Canadian soldier who died in the vicinity of Vimy Ridge in France.

The National War Memorial was unveiled by King George VI in 1939. It consists of a central monument designed by Vernon March with the theme the Great Response of Canada. It features 22 figures representing the various branches of the military involved in the war. The figures are underneath an arch with two winged figures on top of the arch representing peace and liberty.

Surrounding the monument is a paved plaza which was created by the demolition of several buildings. The plaza itself is supported by a 200-square-metre slab which is reinforced by concrete beams and columns that were in the original foundations of the buildings.

In 2009, Public Works and Government Services Canada contracted with Watson MacEwan Teramura Architects to study the monument and surrounding plaza. Their report noted that the concrete slab was damaged and the reinforcing steel was corroded.

Over the years, the monument came to symbolize Canada’s involvement in all wars of the 20th century and the dates of the Second World War and the Korean War were added. When the first phase of reconstruction work was finished in 2014, the dates of the South African War 1899-1902 and the mission in Afghanistan 2001-2014 were added.

A plaque has also been added to honour Corporal Nathan Cirillo who was killed while standing as a sentry on Oct. 22, 2014.

The work is expected to be completed before the National Remembrance Day Ceremony on Nov. 11.

Also in Ottawa, the Canadian Armed Forces said that the Kandahar Airfield Cenotaph will be rebuilt in the west end of Ottawa where the Department of National Defence is moving its headquarters.

That memorial was originally built at the Kandahar airfield in Afghanistan in 2006. Plaques were added over the years as more Canadians died during the mission. There are 190 plaques on the cenotaph noting the deaths of Canadian Armed Forces personnel, as well as diplomat Glyn Berry, journalist Michelle Lang and civilian contractor Marc Cyr. Other plaques honour U.S. military personnel and a civilian who died while serving with the Canadians. The cenotaph was repatriated to Canada at the end of the mission, but has remained in storage ever since.